Despite their historical distrust of the written word, Europe's Gypsies have a growing -- and captivating -- literary tradition. 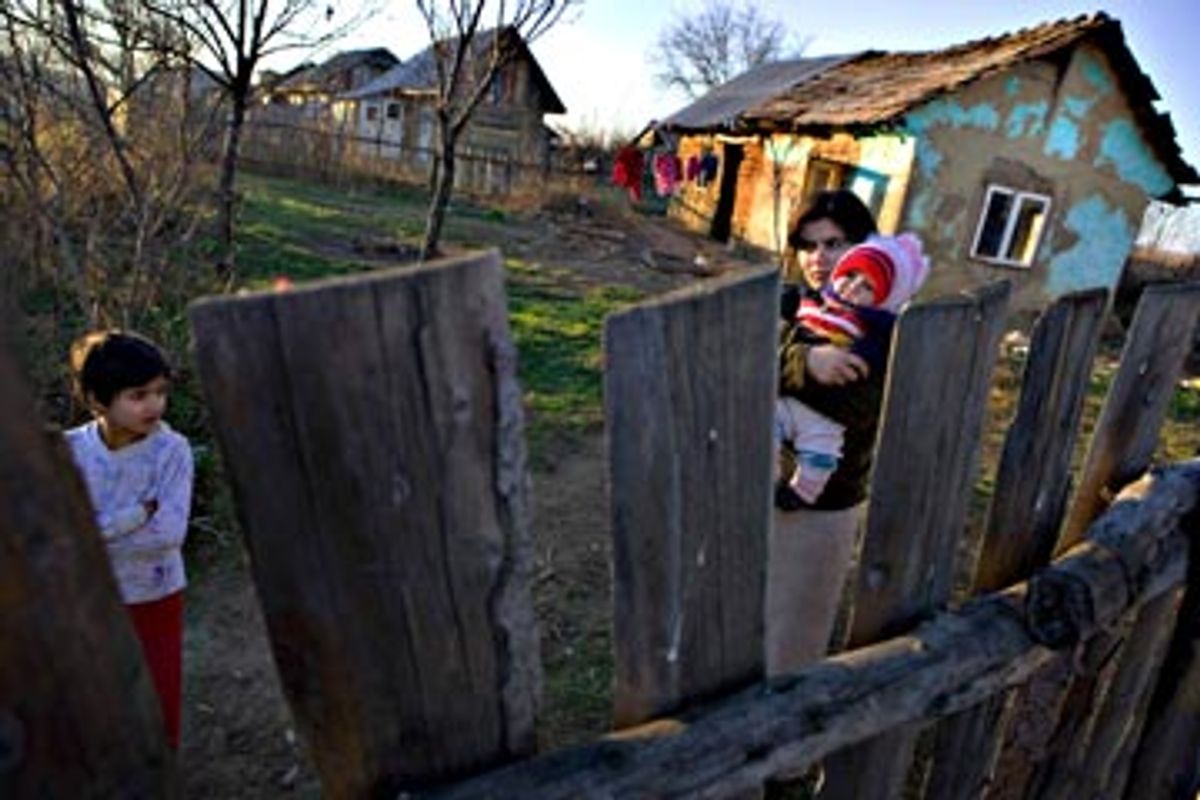 The boy sat near the bridge, at the edge of the Gypsy camp, rolling a cigarette. The bridge was an elegant garbage heap. It was put together with planks, aluminum siding, rope, tree trunks, sodden cardboard, tires. The boy himself looked part of the bridge as he sat, cross-legged, carefully sprinkling the tobacco onto the paper. He had torn a page from a book in order to roll the cigarette. When he lit it, the paper flared a moment, and he smoked the tobacco in quick sharp bursts. When he was finished, he tore the remaining pages from the book and stuffed them in the pocket of his jeans. He threw down the cover and it landed at the foot of the bridge. The cover was too stiff for rolling tobacco.

When he walked off toward a ramshackle shed, leaving the book on the ground, I strolled across to see what he had just smoked -- a Slovak translation of the Romanian writer Emile Cioran. Nothing goes without saying. The boy had taken the page down into his lungs.

If the Roma -- or the Gypsies -- are known for anything beyond the traditional clichis of lying, cheating, stealing, it is a historical distrust of the written word. As Europe's most consistently persecuted minority -- having suffered through centuries of slavery, the Holocaust, and an ongoing dose of government-sanctioned racism -- they are recognized primarily as an oral culture. There is no great Gypsy poet who has been acknowledged across boundaries. There are few writers who have given voice to the 12 million people of Romani heritage around the world (almost the same number as there are Jewish people). There is no overarching book, or myth, or written structure around which the Gypsies have gathered. In fact, apart from a few notable exceptions, there is very little literature about the Roma at all.

A good place to begin, though, is with Isabel Fonseca's "Bury Me Standing," a wonderfully complete nonfiction examination of the situation of Europe's Gypsies. Fonseca's book caused some scuffling among Romani scholars -- as any book written by an outsider probably will -- but at its core it is a very dignified and honest attempt to pull back a curtain and gaze through the window. Written with great style and verve, it is as if Fonseca puts a hot coin to the frosted glass and allows us to peep through. "Bury Me Standing" is possibly the most thorough popular account of the situation of the Roma in Europe.

For me, Fonseca's book reached into my rib cage and turned my heart a notch backward. I was hooked. The book was a launching pad into a world I had never expected to enter, but I ended up corralled by Fonseca's image of Papusza, the Polish-born Romani poet, and for the following four years I traveled, literally and figuratively, through the Gypsy world, most prominently in Slovakia.

For all my travels, though, I seldom saw a book in a Gypsy household. Some of these houses were among the poorest I have seen anywhere in the world -- mud and wattle huts in the eastern part of the country, tiny flats in the wasteland of Bratislava's Petralka, cardboard shacks in a settlement known as the dog-eater's camp. On the other hand, there was music everywhere -- record players, violins, satellite dishes tuned to MTV, radios, and even one electronic piano in a makeshift brick hut. But no books.

"You can't eat books," a social worker said to me one afternoon. "When you're hungry you don't have time to write about it."

Fair enough, but the function of literature is to find dignity in the most common human trait of all -- storytelling. Stories are the vast human democracy. And if anyone has a story, it is the Roma, who are, of course, as internally diverse as any other culture. Where are the stories of the Gypsy doctors? Where are the tales of the Gypsy psychologists?

One of the most prominent scholars to break the mould is Ian Hancock, a British-born Roma who now heads up the Romani Archives in the University of Texas. Hancock is the sort of man who has to live with the sniggers when he is introduced as a "Gypsy intellectual" -- as if that sort of thing is an aberration. But he rides the current quite brilliantly. Hancock put together "The Roads of the Roma," a PEN anthology of Gypsy writers. In this volume, he has collected an impressive array of 43 poems and prose pieces, some of which are translated into English for the very first time. The book also chronicles an 800-year history of oppression that, in itself, reads like a poem.

In a more scholarly vein, Hancock's "The Pariah Syndrome" is an account of Gypsy slavery (yes, slavery) and persecution, the first major English language examination of one of Europe's most shameful episodes. Hancock estimates that well over half of the entire Romani population of Europe was enslaved from the 14th century until the 19th century. The subject is not on any European school curriculum, nor is it acknowledged by any government.

"The world does not yet appear to believe that the enslavement of Gypsies ever happened," says Hancock, who notes that Matio Maximoff's novel, "La Prix de la Liberte" (1955), about a group of Kalderdash slaves, has never been published in English.

"Hardly much more is available on the fate of the Gypsies in the Holocaust," he says. "If this is not a cause for concern among the non-Gypsy population, if that population is reluctant to be reminded about what it has done, and what it continues to do, then the Romani voice must be louder. But one way or another, it will be heard."

More and more, Hancock's call is being answered.

One Slovakian writer who managed to publish her memoirs is Ilona Lackova. Her "A False Dawn: My Life as a Gypsy Woman in Slovakia" is not a brilliantly written book but it is an important historical document, and it shows just how hard it was, and still is, to get ahead in the world and still call oneself a "Gypsy."

The Polish-born poet Bronislawa Wajs (nicknamed "Papusza") became the poster girl for a sort of "Black Is Beautiful" movement instituted in the 1950s, but she was exiled by her own people and spent eight months in a mental asylum. Apart from a brief burst of poetry in the late 1960s she did not write much again. She died, in 1987, in a cottage in southern Silesia. Her poems are found scattered on the Internet and in various anthologies and will one day -- one hopes -- be collected in a full volume. Many of her poems, though, were burned and are gone forever.

The late Milena H|bschmannova, Eva Davidova, Michael Stewart, Donald Kenrick and Thomas Acton are just a few of the scholars who have put their fingers on the Romani pulse. Louise Doughty and Margriet de Moor have written powerful novels. Jan Yoors' "The Gypsies" is a fascinating account of a way of life that is fast disappearing. The Irish Travellers (who are not Roma) have been brilliantly examined by Michael Hayes, Juanita Casey and others.

There is no overwhelming literary tour that one can make of Gypsy Europe and there is, as yet, no vast library that gives voice to the smithy of the Romani soul. There are, of course, no buses to the settlements. There are no package holidays to the seventh floor of the Pentagon housing project in Bratislava.

The average Romani person in Europe today -- at least those who acknowledge that they are Romani -- are faced with cultures that build walls around them, skinheads who talk of frying them with flamethrowers, politicians who pay lip service, and even beauty queens who go onstage to say they want to use their new position of privilege to rid their towns of its brown-skinned inhabitants. Even today in Slovakia, Gypsies are being burned out of their homes and local mayors talk of "whitening out" their city centers.

Still, many Romani activists take heart from history. It is fascinating to remember that the American civil rights movement really only fully succeeded in recent years. The word "gypsy" with its lowercase "g" is analogous to the word "nigger." Time rolls along, as time will. Young Romani poets are today beginning to make a mark. They are less and less afraid to stand up and say where they come from. They are instituting a new form of cultural memory. James Thurber once said, "Let us not look back to the past with anger, nor towards the future with fear, but look around with awareness."

A smidgen of sympathy is worth a ton of judgments. Literature has this capacity to move against the ambient noise of the day, and to change things for the better.

It is not too far a stretch to think that one day a young man, sitting on a rickety bridge, rolling tobacco, might read a page of existential philosophy before, finally, smoking it.