With his usual rock 'n' roll swagger, Steve Jobs introduced Apple's new iPhone. But is the $500 phone more than another cell job? 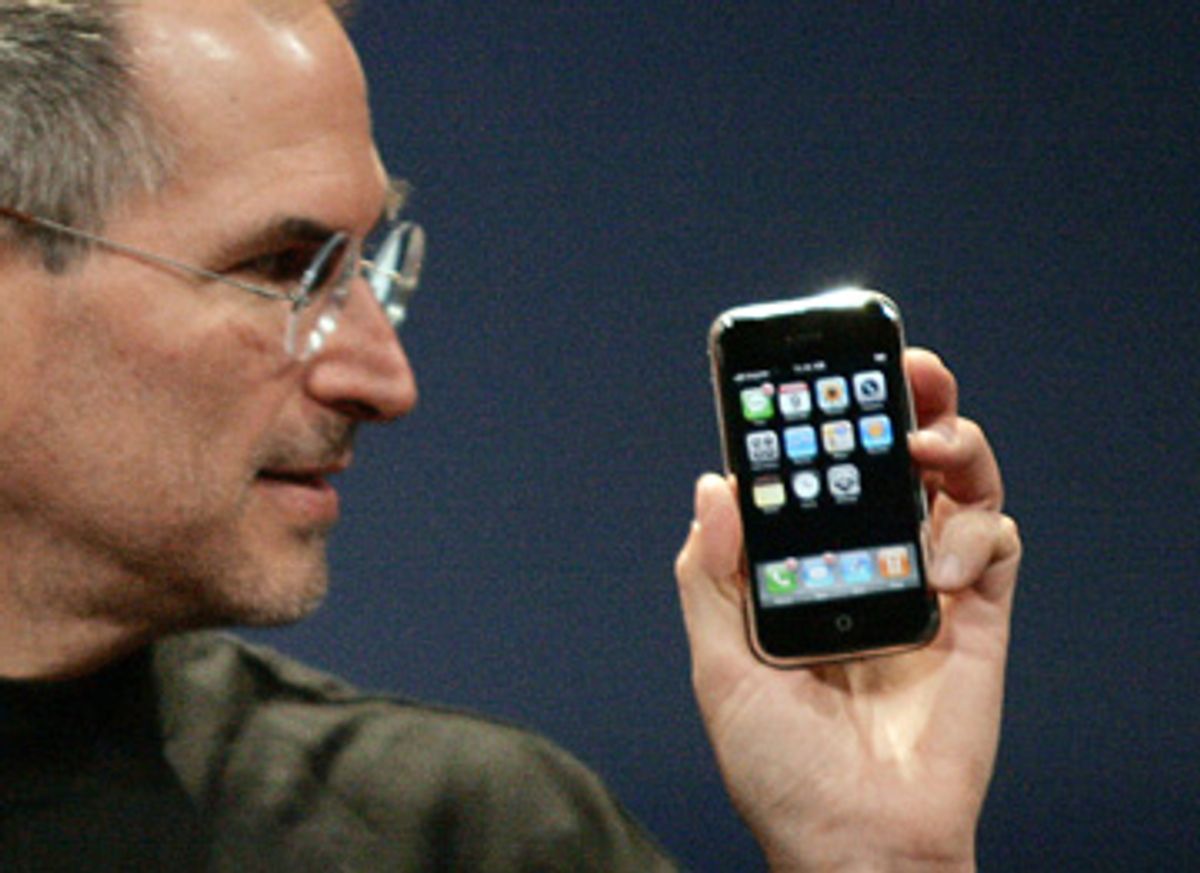 Apple Computer is now just Apple. This was one of CEO Steve Jobs' lesser announcements Tuesday morning in San Francisco, coming near the end of a predictably bombastic presentation at the annual Apple-cult ritual known as Macworld. But it carried enormous meaning. Apple Computer was founded in 1976 by Jobs and his hacker friend Steve Wozniak. For more than two decades, its main business was selling these pre-millennial machines -- self-contained, mainly immobile plastic and silicon beasts with which you interacted by using a kind of typewriter and a doodad reminiscent of a rodent. The company generally set the standard in that industry, but beginning about five years ago, Apple apparently fixed its sights on something grander. First it demolished the music business. Today, Jobs announced his new targets: your phone and TV. "So, we've thought about this," he said. "We are announcing today that we are dropping the 'computer' from our name, and we will now be known as Apple, Inc."

The cause of Apple's identity swap is a palm-size wonder called the iPhone. It's like no other phone you've ever seen. Mostly, it's just a flat screen. Everything you do with it is driven by software, through a remarkable pointing device -- your fingers. According to Jobs, the iPhone can do all that a phone can do, plus all that an iPod can do, and apparently very nearly all that a Mac can do, too.

But first, a note of caution: I didn't get to touch it. The iPhone will go on sale in June, after FCC licensing, so it's possible that the thing won't work as well as Jobs promised. The iPhone's also got a steep starting price of $499, and that's only when you sign a two-year contract with Cingular, the only cellular provider that'll be offering it. Plus, of course, anyone who's just been to a Steve Jobs presentation feels himself faintly under the influence for a while, and maybe tomorrow, when we all come back to earth, Apple's keenest watchers will cast a cold eye on the true chances of the iPhone. At the moment, though, from afar, the thing certainly does look completely revolutionary. When Jobs says that Apple has "reinvented" the phone, you believe him.

Every Jobs speech in recent memory has prompted fervent speculation that the phone's release was imminent; perhaps the only other thing to inspire any similar passion among users was whispers of a coming widescreen version of the iPod (see some fan mockups here). The iPhone represents the realization of both rumors. It features a vertical screen that morphs into a horizontal one. When you flip the phone sideways, it plays your movies, TV shows and photos on a very wide, sharp 3.5-inch screen. Much of the rest of your business is done vertically, but because the phone runs a version of Mac OS X, Apple's desktop operating system, you can do many things in parallel. In his demo, Jobs flipped the phone in a natural, intuitive manner, while performing multiple tasks at once. He'd start off playing music or a video, then answer a phone call, then switch to the Web browser to look something up, then scan through his pictures, then send a photo via e-mail to the person he was talking to. (Probably not a good idea to do all this while driving.)

Surely he's been using the iPhone for some time, but Jobs' facility with the device appeared almost magical. If you've ever tried to use your phone -- even if it's a really great phone -- for something other than calling people, you've likely become used to a certain unavoidable and sometimes infuriating clunkiness. The iPhone, though, has something called multi-touch, which Jobs promised would become as important a user interface as the mouse and the iPod click-wheel. Multi-touch seems to precisely read what your fingers mean when they touch the screen a certain way. Apple has invented a language of taps to power it. Put two fingers down and pinch them together to zoom out; tap twice to zoom in. To scroll up or down, you simply fling your digit across the screen, as if you were sliding a penny across your desk. Crowds at Macworld are easy to please, ready to applaud anything Jobs says, but the scrolling demo elicited what sounded like authentic, audible shock -- it looked so damn cool you wanted to try it yourself. You can also type on a QWERTY keyboard that pops up on the screen. While composing e-mails and text messages, Jobs seemed to be going at a speed of at least 20 words a minute -- not fantastic, but respectable for a phone.

For many prospective customers, though, all these tech specs might not really matter. "The Perfect Thing," Steven Levy's great book on the making of the iPod, suggests that Jobs bristles at the notion that many people might be buying iPods only as a status symbol or as a piece of fashion. For Jobs, design is inseparable from function, and it's an insult to say that the iPod's utility takes a back seat to its looks.

Apple's entry into the cellphone business will only heighten this phenomenon. There are probably only a few of us who really need to have a cellphone, an iPod, a Web browser, a text chat system, Bluetooth and Wi-Fi all in one device wherever we go -- maybe if you're an E.R. doctor or a FEMA official. (Maybe not a FEMA official.) For most of us, all this will be as necessary as a Hummer in Riverside. The real point is how the iPhone looks and what it says about the people who own it. And it looks marvelous. It's is 4.5 inches high, 2.5 inches wide, and less than half an inch thick. From the back it resembles an iPod, but in front the iPhone is like the winner of a design contest to make the iPod even flashier -- all blackened glass framed by a thin strand of silver. Levy writes that the iPod has become one of the main items that celebrities demand in gift bags. If it does nothing else, the iPhone is sure to cultivate a similar passion among the famous and, even better for Apple, the much larger market of wannabes. If you want anybody to think you're anybody, you've got to, starting in June, own an iPhone.

The entertainment business, incidentally, was the object of Apple's other main announcement this morning. Last fall, Jobs gave the tech press a preview of a device he called iTV, a set-top box that can stream your digital media from your computer through to your high-definition television set. Today, he announced that the device, which is now to be called Apple TV, will go on sale in February for $299. He showed the crowd how this worked too, and it seemed rather snappy. Everything that's on your computer can now be played on your TV, while you're sitting at your couch, using a nice Apple remote.

Jobs has long been calling the Mac a "digital hub" around which our tech-addled lives will revolve. What hasn't really been clear until now is how ambitious his strategy is, and how successful. Apple is now the fourth-largest retailer of music in the nation, and it has already sold 50 million TV shows and more than a million feature-length movies through iTunes. (There has been some recent speculation among analysts of a dip in iTunes music sales, but Jobs assured Macworlders he'd seen no such decline; iTunes is selling 5 million songs a day, he said.) Jobs sees Apple as having a hand in all your media. It's there whenever you experience information, from when you buy it to when you view it.

But there will also be bumps in this course. Apple, under pressure from entertainment companies, is committed to a vision in which consumers have limited rights to share and copy media, and it'll be a scary thing if that vision becomes even more entrenched than it is now with the iPod. The other problem is that computers are inherently buggy. Macs crash, and it's frustrating when they do. It's even more frustrating, however, when your music player crashes, and if your phone or your TV crashes, you'll probably want to tear your hair out. The iPhone is so complex -- it's got an accelerometer in it to detect when you flip it sideways, it's got a proximity sensor to tell when it's near your face, it's got to understand myriad finger gestures -- that crashing, or at least slowing down, the way an overworked computer sometimes does, might be a real possibility.

Yet working out the irrepressible burdens of innovation seems to be just what Apple was born to do; more than making computers, its purpose is to make technology a transcendent experience. In 1984, there was the Mac. In 2001, the iPod. As he unveiled the iPhone, Jobs looked to have not a shred of doubt that Apple would, again, change everything.