Democrats: Anti-surge resolution is only the beginning 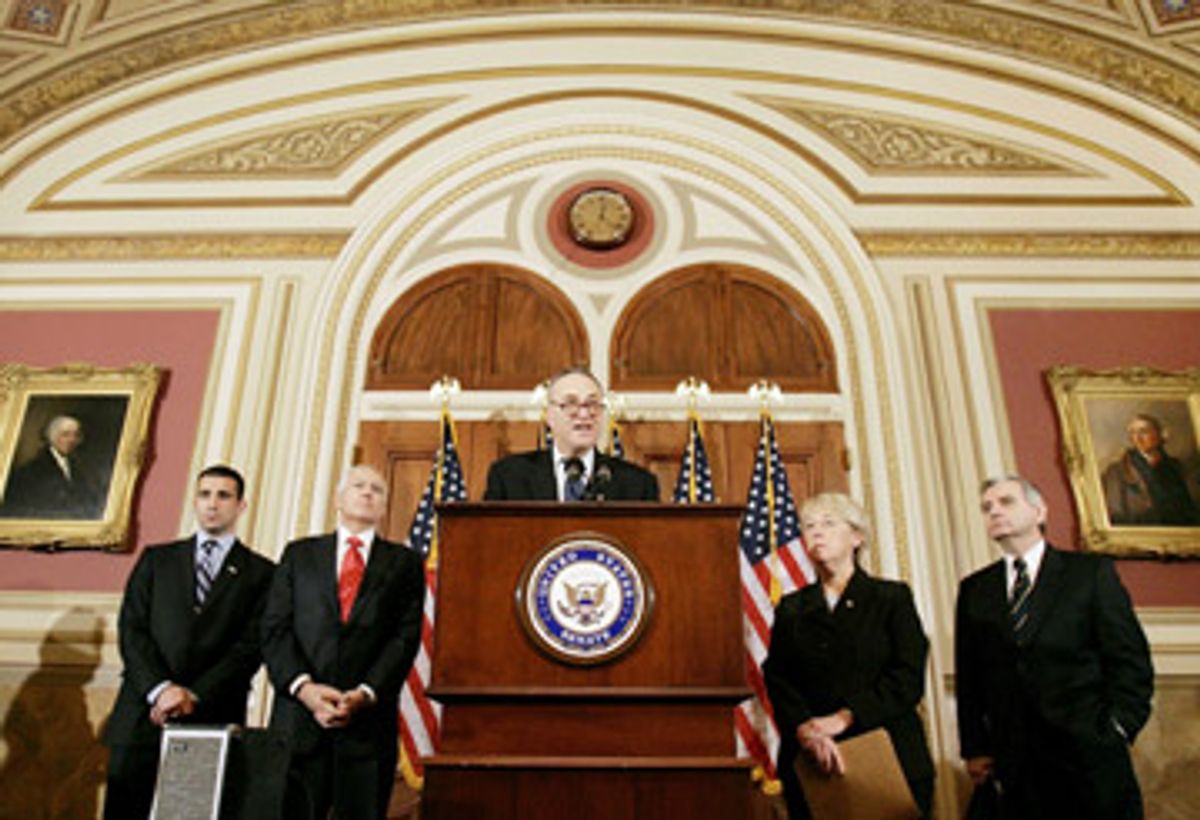 When Ted Kennedy offered legislation earlier this week to block funding for a troop increase without further congressional approval, Harry Reid seemed to back away by calling instead for a nonbinding "bipartisan statement" opposing any escalation in Iraq. At a press conference at the U.S. Capitol a few minutes ago, however, Sen. Chuck Schumer made it clear that Reid's nonbinding resolution would be only a first step -- a way to measure congressional opposition to a "surge" and the president's response to it.

Schumer was an early Iraq hawk, but his experience as chairman of the Democratic Senatorial Campaign Committee has probably left him with a pretty good sense of where the American people are on the war. He said that the president faces an "enormous" task tonight if he hopes to convince the public -- or Congress, for that matter -- that the way forward in Iraq involves sending more U.S. troops to fight there. He predicted that if the Senate were to hold an up-or-down vote on Bush's "surge" plan today, the opposition to the plan would be "overwhelming" and that Republicans would be part of it.

Schumer said "an escalation" alone is "not going to bring any kind of safety or calm" in Iraq. Appearing at the same press conference, Sen. Jack Reed said predicted that Bush will "dress up" his speech tonight with "rhetoric" about a "new approach," but he complained that the plan Bush has in mind is less of a "surge" than it is a "gradual escalation" that will set a "new troop plateau" without accomplishing any strategic goals. Retired Gen. Wesley Clark dismissed the Bush plan as "stay the course more," a "political gesture made at the expense of our men and women in uniform and their families" and designed to hide the fact that the president still isn't addressing the diplomatic issues he'll need to address if he has any hope of success in Iraq or the Middle East.

Like Clark, Schumer said that Bush is putting the cart before the horse -- that he has come up with a plan to send more troops to Iraq without articulating a strategy they will further. Schumer said that hearings before the Senate Foreign Relations Committee and the Senate Armed Services Committee this week and in the weeks ahead will allow Democrats to "ask the tough questions" about the right way forward in Iraq. In the meantime, he said he expects Democratic leaders to draft a "simple resolution" opposing the "surge" and to get it before the Senate as early as next week. "That resolution will not be the last thing we do," Schumer said.

He declined to get specific about what the Senate might do after passing a resolution. Asked whether Democrats might move to limit appropriations for an expanded war, he said: "We will examine everything."