Senators tell Rice: The president has lost us

"I've bought into his dream. At this stage of the game, I don't think it's going to happen." 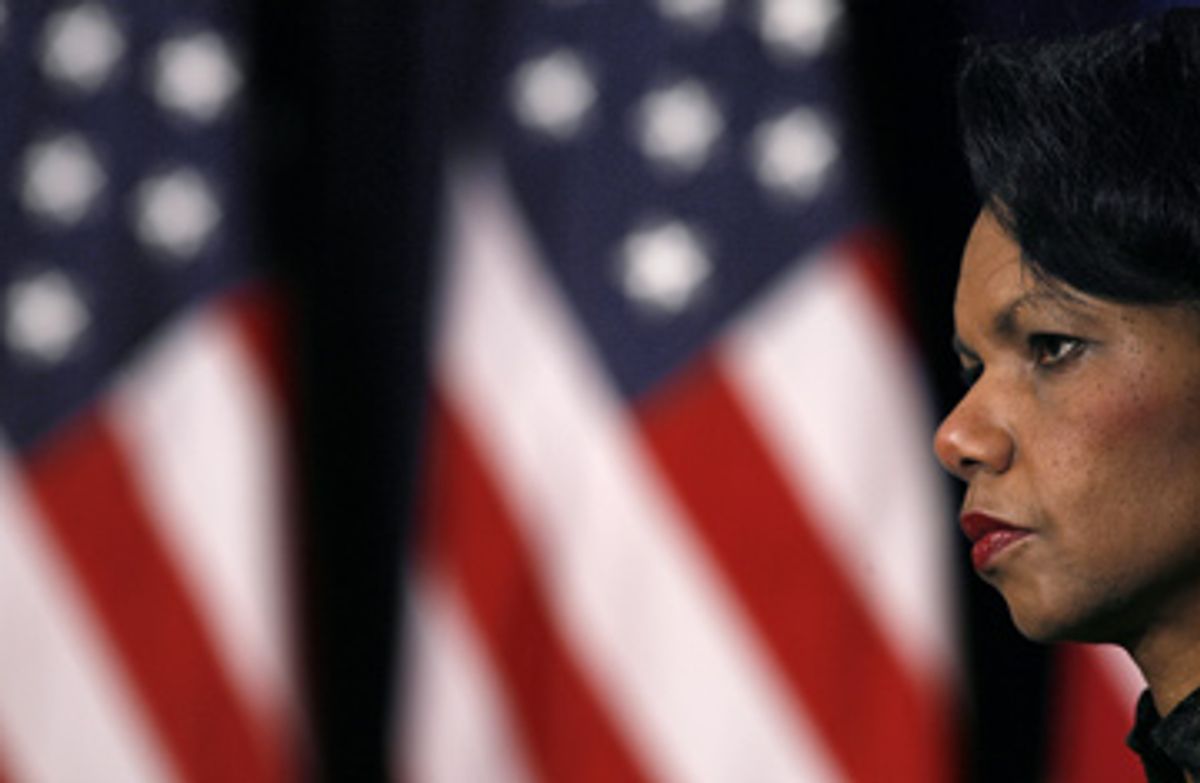 Ohio Sen. George Voinovich writes letters to the families of fallen U.S. soldiers. Until now, he's said in those letters that the sacrifices Americans troops are making in Iraq are every bit the equal of those U.S. soldiers made in World War II. But Voinovich told Secretary of State Condoleezza Rice this afternoon that he's going to have to change his letter now. "I've gone along with the president on this, and I've bought into his dream," Voinovich said, his voice choking with emotion. "At this stage of the game, I don't think it's going to happen."

The Ohio Republican's delivery was more emotional than some of his colleagues', but the sentiment he expressed this afternoon was pretty much the same as the one Rice heard from most members of the Senate Foreign Relations Committee: The president has lost the American people and their representatives, and the new "way forward" he put forth last night isn't enough to win them over again.

Barack Obama told Rice that the Bush administration "took a gamble" in Iraq, staking "American prestige and our national security on the premise that it could go in, overthrow Saddam Hussein and rebuild a functioning democracy. And so far . . . it appears to have failed. And essentially, the administration has repeatedly said, 'We're doubling down, we're going to keep on going. Maybe we lost that bet, but we're going to put a little more money in.'"

Like John Kerry and Norm Coleman before him, Obama tried, unsuccessfully, to get Rice to describe what would happen if the Maliki government doesn't live up to its promises this time around: "Are there any circumstances that the president or you are willing to share in which we would say to the Iraqis, 'We are no longer maintaining American combat troops in Iraq?' Are they any circumstances you can articulate in which you would say to the Maliki government, 'Enough is enough?'"

Rice said she was "not going to speculate" and that Bush has already made it clear that Americans' patience isn't unlimited.

Walking out of the hearing, Obama acknowledged that there was probably nothing Rice could have said that would have satisfied him so long as it involved sending 21,000 more U.S. troops to Iraq. Waiting for a train back to the Capitol, he told his staff that he was happy that today's hearing had shown "bipartisan" opposition to the president's new plan. He was certainly right about that. Some highlights from the day's session:

Sen. John Sununu: The New Hampshire Republican warned Rice that "if we don't see more specifics and a time frame" for progress in Iraq, "then Congress is probably going to step into the void and set a time frame." He said he would prefer to have the administration, not Congress, set a more specific time frame. Rice said she'd get back to him with a clearer sense of when the Iraqis thought they could accomplish the things they're supposed to be accomplishing, but she didn't say anything about setting hard-and-fast deadlines for when the United States expected Iraq to do anything. Indeed, at one point during today's proceedings, she seemed to soften on the whole idea of benchmarks, saying that legislatures in the United States don't always meet the deadlines they're supposed to meet for getting things done.

Sen. Russ Feingold: The Wisconsin Democrat said that that it is time for Congress to use "the power of the purse" to cut off funding for the war -- not just for the escalation, but for the entire war. "By setting an end date for funding for the war, we can give the president the time needed to redeploy troops safely from Iraq." Feingold's words drew a rare round of applause from some of those gathered to watch the hearing.

Sen. Chuck Hagel: The Nebraska Republican said the president has "set in motion" a "very, very dangerous" series of events. "I think this speech given last night by this president represents the most dangerous foreign policy blunder in this country since Vietnam," he said. When Hagel referred to the president's plan for an "escalation," Rice said that she and the president preferred the term "augmentation," and that it was important for everyone to have the right "image" of what's actually happening on the ground in Iraq. When Hagel said he had a pretty good "image" of the situation already -- "Iraqis are killing Iraqis ... we're in a civil war" -- Rice responded lamely: "Not all of Baghdad has fallen into a civil war."