This "based on true events" murder story may bark and bare its teeth a lot, but only Justin Timberlake has any real bite. 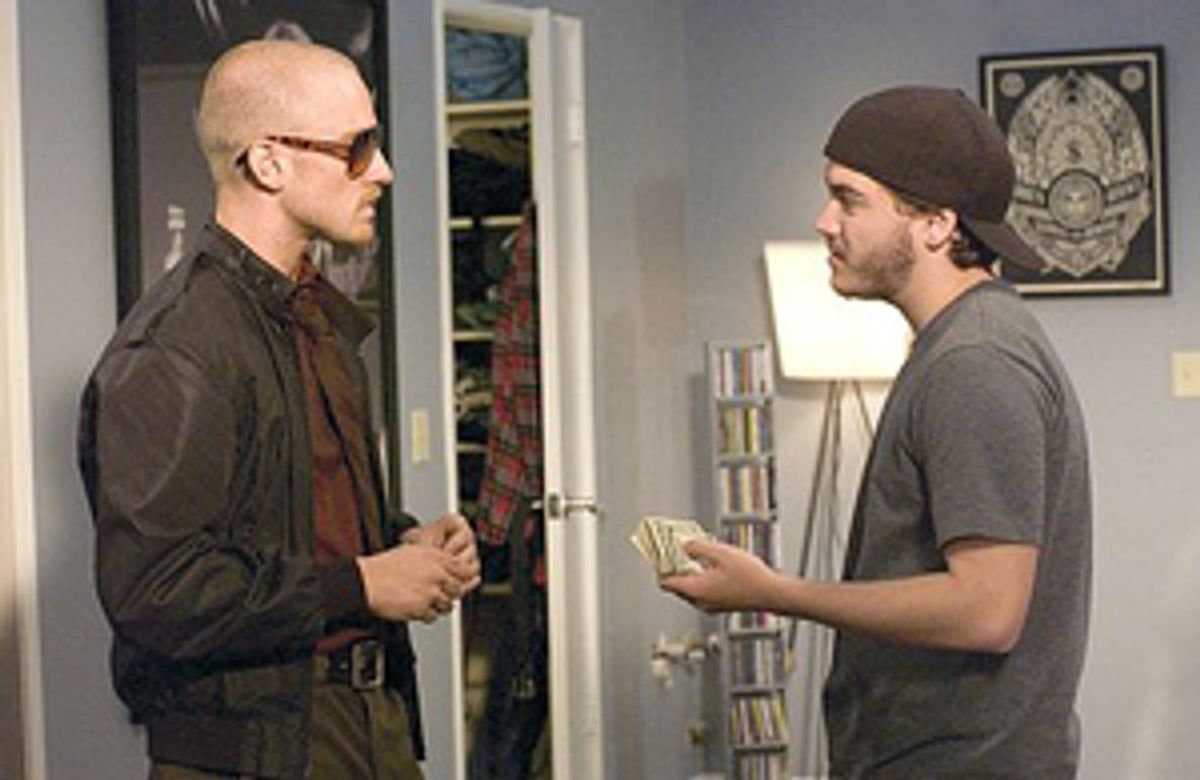 Nick Cassavetes' "Alpha Dog" opens with home-movie footage of sweet-looking little kids, circa early 1980s, splashing in wading pools and celebrating their bar mitzvahs as an aggressively plaintive cover -- sung by Eva Cassidy -- of "Over the Rainbow" tootles in the background. Immediately, you know that there's some heavy-duty irony going down here: These adorable middle-class moppets will grow up to be tattooed crackheads and low-level, gangsta-wannabe drug dealers. Oh, the shattered dreams of childhood! Before the movie has even begun, we're invited to feel shock, dismay and sadness at the idea that it's possible for really cute kids from seemingly normal homes to grow up to be really bad dudes -- or even just woefully misguided ones. These kids are depraved on account of they're deprived. Gee, Officer Krupke, what's a gangsta gonna do?

That opening is just the first sloppy coat of self-conscious seriousness slapped on "Alpha Dog" -- many more will follow. "Alpha Dog" was inspired by real events, yet it's sorely lacking in emotional weight, maybe because Cassavetes (who also wrote the script) doesn't know whether he's making a serious social drama or an exploitation film: "Alpha Dog" succeeds as neither. (You can listen to the director discuss the film with Salon here.) In places, the picture is wryly comic (and brutal), as if Cassavetes were going for a "Pulp Fiction" vibe. Mostly, though, it's simply unpleasant: The movie lets us know very early on that something really bad is going to happen to one of its most guileless characters; then it gives us plenty of time to enjoy that character's innocent exploits, even as we're waiting for the ax to fall. It's a cheap, dirty setup.

"Alpha Dog" follows a posse of spoiled white suburban kids led by a scowling pipsqueak of a thug named Johnny Truelove (Emile Hirsch, who's supposed to be the movie's scary center, but who comes off more like an armed mosquito). Johnny's daddy, Sonny (an uncharacteristically bland Bruce Willis), supplies him with bits and bobs of marijuana to sell, which makes it easy for Johnny to fancy himself a playa. He skulks around wearing a dissatisfied sneer and a backward baseball cap, a poster child for affluent suburban discontent.

Johnny has a pretty girlfriend named Angela (Olivia Wilde), who doesn't seem to mind being absent-mindedly slapped on the ass like a babe in a hip-hop video, and a slave-boy named Elvis (Shawn Hatosy), who's doggishly devoted to him for reasons the movie never explains (and which would probably be unfathomable anyway, considering Hirsch's Johnny has all the charisma of a pair of sprung Underoos). Johnny has no conscience and even fewer brains, but he has managed to attract one friend with at least a modest degree of moral fiber: Frankie (Justin Timberlake), an affable skateboard kid with a ready smile, never hesitates to tell Johnny when he's come up with a really lousy idea, which is practically all the time.

The plot of "Alpha Dog" involves a loose-cannon crackhead named Jake (Ben Foster, in a performance that's all tics and twitches, exhausting to watch), his 15-year-old half-brother, Zack (Anton Yelchin), and a not-even-half-baked plan, executed by self-styled "businessmen" who consume too much of their own product, that could only have gone horribly awry. Cassavetes is one of those directors who's considered versatile just because he's made a bunch of dissimilar movies. (His last two pictures were the '40s romance "The Notebook" and "John Q," a hostage drama not-so-cleverly disguised as a treatise on healthcare problems in this country.) The question everyone tends to skirt is whether his movies are actually any good. Cassavetes' method seems to be to turn on the camera and let it suck up all the air around it -- it's the Dyson vacuum school of filmmaking. Nothing in Cassavetes' movies ever seems shaped or thought out; even worse, the pictures rarely seem to have a pulse. Only one sequence in "Alpha Dog" has any emotional juice at all, and that's not because of the way it's staged, but because of what the actors bring to it.

In fact Cassavetes -- a sometime actor himself -- doesn't seem to understand actors at all. From the finished product, it looks as if his preferred method of guiding his actors is to egg them on rather than nudge them toward restraint. In a smallish role in "Alpha Dog," Sharon Stone -- who has given fine performances in recent pictures like "Bobby" and "Broken Flowers" -- has an embarrassing scene that's more implosion than acting. (It doesn't help that Cassavetes has put her in a fat suit, ostensibly to up the pathos quotient.) Amanda Seyfried (the murdered Lilly Kane on "Veronica Mars" and one of the stars of "Big Love") manages to avoid the Cassavetes death grip: She plays a local suburban party girl, and her performance has a tossed-off sexiness.

Timberlake is one of the few other performers here who emerges unscathed. Pop singers and hip-hop artists often make wonderful actors -- look at Frank Sinatra and Ice Cube -- and it's going to be exciting to see what happens with Timberlake. He's a charismatic, believable presence; unlike almost everyone else here, he relaxes into his character instead of trying to wrest it into a faux-dramatic shape. In this mess of a picture, he may be the rookie actor, but he's also the one to watch, the movie's North Star. The rest may as well be pinholes in a box.