Did the U.S. just provoke Iran?

Thursday's raid on the Iranian consulate is more evidence that President Bush is ready to escalate the conflict. 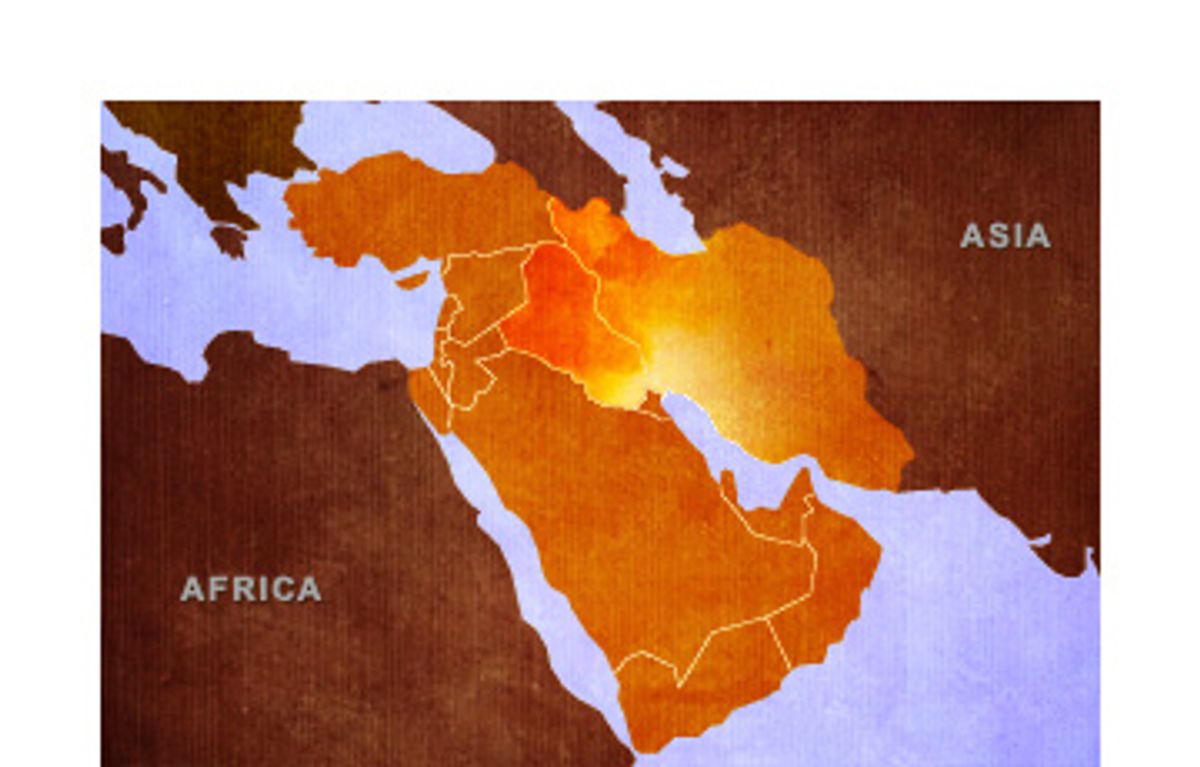 For months, rumors of war between the United States and Iran have been building. Many fear that President Bush is spoiling for a fight, and they've begun to interpret various developments in the region as the run-up to an attack on Tehran. A report in the British press about a possible Israeli raid on Iran's nuclear facilities quickly became linked with predictions about coordinated action with the United States. Observers on all sides, left, right and other, convinced themselves that the appointment of Adm. William Fallon to oversee military operations in Iraq and Afghanistan meant there would soon be Tomahawk missiles, if not U.S. soldiers, crossing the border into Iran.

President Bush's speech on Wednesday night only stoked such speculation. Bush paid lip service to the Iraq Study Group report, but cast aside its advice that he negotiate with Iran and Syria. Instead, he rattled sabers at Iran with some ferocity, accusing it of arming insurgents in Iraq and threatening it with international isolation. He attempted to rally his Sunni Arab allies, such as Egypt, Jordan and Saudi Arabia, in this effort. He said, "We will disrupt the attacks on our forces. We'll interrupt the flow of support from Iran and Syria. And we will seek out and destroy the networks providing advanced weaponry and training to our enemies in Iraq." He announced that he would position another aircraft-carrier battle group in the Persian Gulf and would deploy Patriot antimissile batteries.

Then Thursday came a U.S. raid on an Iranian consulate in the Iraqi Kurdish city of Irbil. By the end of the day, rumors of war with Iran had spread to normally cautious corners of the Internet. The Washington Note wondered aloud if Bush had issued an executive order to commence military action against Iran and Syria. Was the raid a deliberate provocation and the preface to war?

An eyewitness report briefly posted in Arabic to the Web site of the Patriotic Union of Kurdistan reported that two U.S. helicopters hovered near the building for a quarter of an hour early Thursday morning, then dropped off several soldiers. They approached the consulate and used megaphones to demand that those within surrender. They then tossed stun grenades inside before attacking it and detaining five persons within, three of whom were Iranians. The U.S. soldiers confiscated computers and records from the building. According to the Associated Press, U.S. troops also hurried to the Irbil airport in hopes of detaining persons suspected of trying to flee the country.

The Iranian mission's application to the Kurdistan Regional Government to be recognized as a consulate is still in process, but it would be sophistry to argue, as the U.S. has done, that its status as a diplomatic mission is questionable. American forces did, indeed, raid an Iranian government installation. Thursday's events, however, are unlikely to be the immediate preface to wider action against Iran, since the operation appears to have been carefully targeted and limited in scope. It was also not the first action taken against Iranian targets inside Iraq. Last month, U.S. forces raided the compound of influential Shiite cleric Abdul Aziz al-Hakim and netted Iranian intelligence officers.

But if Bush were to escalate the regional conflict and try to involve Iran, the assault on the Iranian consulate in Irbil suggests the ways in which he would justify his actions. He and Secretary of State Condoleezza Rice have begun speaking, without presenting any evidence, of Iranian aid to groups killing U.S. troops in Iraq -- hence the reference to "networks" in his Wednesday speech. The difficulties faced by the U.S. military occupation of Iraq itself may well be made the pretext for aggressive action against Iran.

In escalating a confrontation with Iran, Bush is placating his friends in Sunni-dominated states. On Thursday, the Saudi-backed London daily Al-Hayat ("Life") reported that Bush called Saudi King Abdullah to discuss security issues with him, and described the measures to be taken in Baghdad. Saudi officials have on several occasions expressed alarm about increasing Iranian influence over Iraq. Sunni Arab allies of the U.S. such as Saudi Arabia, Jordan and Egypt have taken the lead in asking that Bush not withdraw precipitately from Iraq and not acquiesce in growing Iranian influence and power in the region. In return, the Bush administration is pressuring the kingdom to help rein in rebellious Iraqi Sunni Arabs.

Speaking in Provo, Utah, on Thursday, Saudi ambassador to Washington Prince Turki al-Faisal seemed to endorse Bush's plan, saying, Saudi Arabia "has always maintained that since America came into Iraq uninvited, it should not leave uninvited ... For America to pack up now and leave would be very detrimental and something that would be unacceptable to our part of the world."

The anti-Iranian passages of Bush's speech seem to have pleased Egyptian President Hosni Mubarak as well. Al-Sharq Al-Awsat ("the Middle East"), a pan-Arab London daily, reported that Mubarak warned on Thursday against a deep cleavage in the region, which he said would harm the Middle East and the whole world. He accused the Iranians of seeking support in the region. He called on "all to keep their hands off Iraq," urging that the dangers of a sectarian or ethnic war be recognized. He predicted that the situation in Iraq would deteriorate after the "barbaric" way in which former dictator Saddam Hussein was executed. Iran had welcomed the execution of its old enemy.

Reviews from elsewhere were less kind. Iranian Foreign Ministry spokesman Mohammad-Ali Hosseini condemned Bush's new security plan, charging that more U.S. troops would only bring greater instability and tension to the Iraqi capital. He called instead for an immediate withdrawal of U.S. troops from Iraq as the only realistic means for solving U.S. problems in that country. He dismissed Bush's charges of Iranian and Syrian intervention in Iraqi domestic affairs as merely an attempt to find a scapegoat for its failed policies. He described Bush's decision to bring Patriot antiaircraft missiles to Iraq as a ploy to protect Israel ("the Zionist regime") under the guise of safeguarding Iraq, a Muslim country. With regard to the Iranians detained in Irbil, he demanded their immediate release. He pointed out that Iraqi officials had denied Iranian interference in their domestic affairs.

And the Iranians were not the only ones alarmed by the belligerent tone of Bush's address and the immediate follow-up with a violation of international norms in assaulting a consulate. Senators of both parties also lambasted Bush's apparent resort to a tactic similar to that of Richard Nixon in Cambodia, when he widened a failing war. At a hearing on the Hill where Secretary of State Rice was grilled, Sen. Joseph Biden, D-Del., warned that Bush would need a new and separate congressional authorization to launch an attack on Iran. Sen. Chuck Hagel, R-Neb., called Bush's plan "the most dangerous foreign policy blunder in this country since Vietnam." Hagel specifically cautioned against a Cambodia-style diversion in Iran.

Within Iraq, even local critics of Iran objected to Bush's plan to put more U.S. troops in Baghdad. The Association of Muslim Scholars, a hard-line Sunni Arab clerical organization, replied that "every U.S. soldier on Iraqi soil is one too many," and beseeched the U.S. Congress to take a stand against the president's plan so as "to prevent the continuing spillage of the blood of innocents," according to German wire service DPA.

The consulate raid, meanwhile, seems to have alienated some of America's best friends. Members of the Kurdistan Regional Government maintain that the Americans did not contact them about this operation beforehand, and Kurdish leaders protested the raid. Iraqi Foreign Minister Hoshyar Zebari, who is of Kurdish heritage, said on the Al-Arabiyah satellite television channel, "What happened ... was very annoying because there has been an Iranian liaison office there for years and it provides services to the citizens."

The U.S. definitely failed to coordinate the raid with Kurdish security forces. When American troops went to the airport, the Kurdish peshmerga who were guarding it, alarmed at the approach of unauthorized foreign troops, came very close to firing on them. Whether or not the raid was intended to provoke Iran, it almost turned into yet another Bush gambit with unforeseen, disastrous consequences. The fallout from a big firefight between U.S. soldiers and the Kurdistan paramilitary could have been serious, since Kurds are among the few strongly pro-American populations left in Iraq.