HBO's "Rome" teeters between barbarity and civility in the wake of Caesar's death, but its focus feels too narrow for such an epic tale. 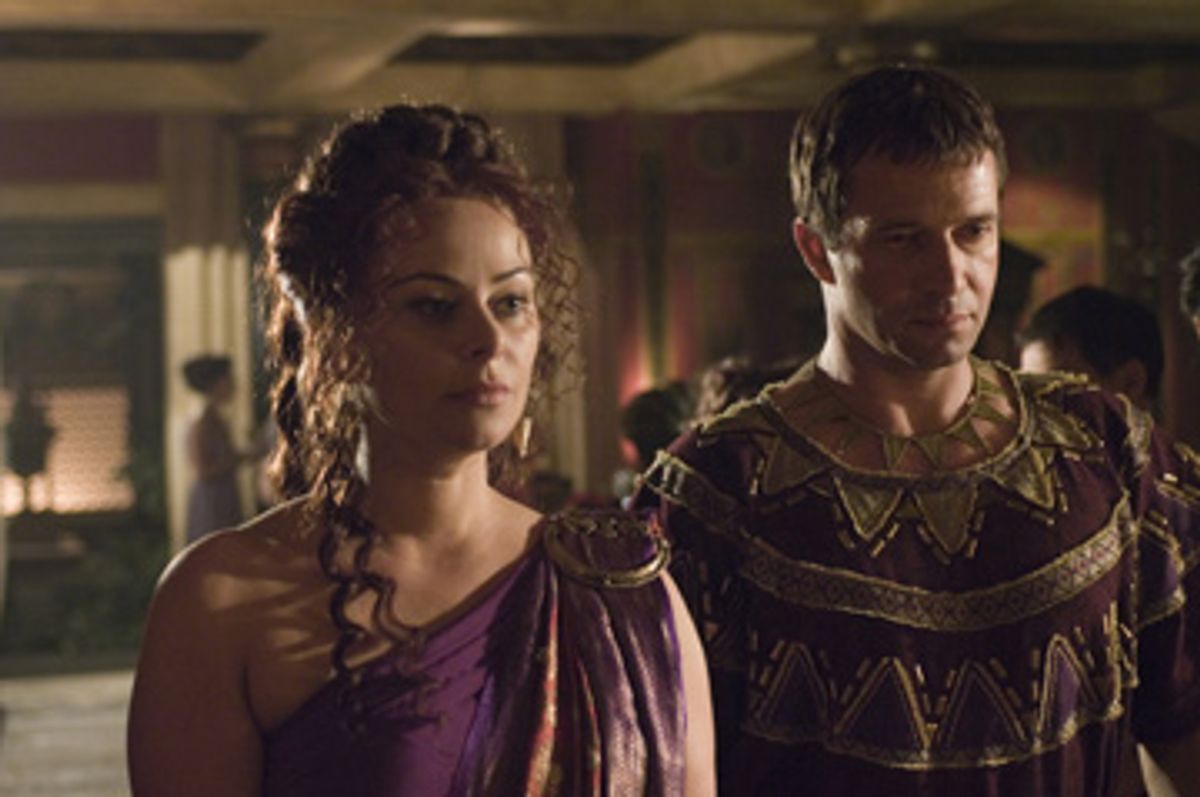 At the start of the second season of HBO's "Rome," Julius Caesar lies slain in a pool of his own blood, but his murderers seem as uncertain about their fates as his allies are. Instead of having a plan or purpose beyond getting rid of Caesar, Brutus and Cicero find themselves quibbling over what the next move should be. Cicero (David Bamber) wants to kill Caesar's right-hand man, Mark Antony (James Purefoy), but Brutus (Tobias Menzies) will have no part of it. Meanwhile, Atia (Polly Walker), Caesar's niece, wants to leave the city, but her son Gaius Octavian (Max Pirkis), upon hearing that Caesar has named him his son and sole heir in his will, feels that it makes more sense to stay. Mark Antony narrowly escapes being murdered right after Caesar's death, but once he feels he is safe, he taunts Brutus, Servilia (Lindsay Duncan) and Cicero about the fragility of their position.

Mark Antony: Listen. Why so quiet? A tyrant is dead. Surely the people should be happy. Where's the cheering throng at your door? Where are the joyous cries of liberty?

Servilia: The people fear change. A somber mood is only natural.

Brutus: When they realize they are free from tyranny, the people will be glad.

Mark Antony: The people loved Caesar, and they will hate you for what you've done.

Brutus: They loved him once, as I did.

Mark Antony: Some have turned against him, no doubt. It cannot be denied he was something of a tyrant. But a great many people will worship Caesar until they die, a great many. And those people are mine now.

With such big talk of what the people of Rome want and what they'll do, you'd think we'd see some evidence of their feelings or actions for ourselves occasionally. After all, while the leaders of Rome had a particular knack for manipulating public opinion, the shifts in power seemed to depend largely on which leader the people and the military were inspired to support. Instead, we spend a great deal of time in the palaces of Servilia, Caesar's scorned lover and Brutus' mother, and Atia, Caesar's niece and ally, speculating along with Brutus or Octavian or Mark Antony about what the fates have in store. As a result, the second season of "Rome" feels more than a little claustrophobic, and operates on a much smaller scale than might be anticipated for such an epic production.

Even when big events do occur -- Octavian leaves the city to build an army, then his former ally sets out to fight him -- the motivations aren't clear, the conflict between the key players is difficult to follow, and we're offered only brief scenes that do little to either illustrate the situation or give us a feel for these characters and what they're up against.

Worst of all, we miss the action. "Octavian has built an army," we're told, but we don't see him leading his men until much later. "Mark Antony has been defeated," we're told, but we didn't see him when he set out to battle, so we hardly care when he loses. While most of the dramatic action and conflict occur off-screen, we're treated to the same old clash between Servilia and Atia, two characters whose manipulations, seductions, egocentrism and pride make them practically indistinguishable from each other. Is it possible to care whether Servilia kills Atia or Atia kills Servilia, when we know so little about what's actually happening in Rome?

Shakespeare, who obviously knew exactly how to maximize the drama in any story, still found ways of hinting at the historical forces in play every step of the way -- Marcellus and Flavius lament the fickle crowds, cheering Caesar's victory over Pompey the way they once cheered for Pompey; Casca tells Cassius and Brutus how the crowds applaud when Caesar makes a big show of humbly refusing a crown from Mark Antony ("If the rag-tag people did not clap him and hiss him, according as he pleased and displeased him, as they use to do the players in the theatre, I am no true man"); in his famous speech, Brutus explains to the Roman crowds that Caesar's ambition made him dangerous. Without such devices to set the scene, the drama is stripped of its historical impact, and Servilia and Atia might as well be Alexis and Krystal of "Dynasty," tearing each other's clothes off in the nearest swimming pool.

Expectations for any HBO drama are sure to be unrealistically high, but when you're watching "Rome," it's pretty impossible not to think of how nicely David Milch used the small town of Deadwood to illustrate the forces in play in the American West in the late 1800s, or how artfully David Chase explored mob life in America through the Soprano family. Even though our focus remained on a few select characters in those shows, the power dynamics and the larger picture were always clear. With "Rome," the main characters engage in repetitive rivalries while the landscape on which their battles occur remains obscured.

The show's preoccupation with the soapiest, most sordid subplots is certainly understandable, given how thin the line was between civility and utter barbarity in those troubled times. This explains why we spend so much time with Lucius Vorenus (Kevin McKidd) and Titus Pullo (Ray Stevenson), two fellow soldiers and friends from the 13th Legion who find their fates have shifted dramatically in the wake of Caesar's death. In turmoil over his wife's death, Vorenus abandons his stiff adherence to principle and steps over to the dark side. Mark Antony enlists him to manage the warring gangs in Rome, and he immediately intimidates the leaders of the gangs, who are reluctant to respect his authority, by declaring himself a "son of Hades." At a time when the gods were utterly feared, his statement makes the entire room, Pullo included, gasp in abject horror. In contrast, Pullo, appearing less savage than he once was, marries his beloved slave girl and finds himself working hard to talk some sense into Vorenus, who no longer cares about his own welfare since his wife's death and children's disappearance.

The writers of "Rome" do a nice job of illustrating how the social norms and mores of the times are so often at odds with each other. On the one hand, Rome is a sexually free, hedonistic culture that the wealthy members of society accept and encourage. When Atia refuses to sleep with Mark Antony, he proclaims, "I'm not rising from this bed until I've fucked someone!" Instead of protesting, Atia matter-of-factly responds, "Fine, fine, Marylyn, fetch that German slut from the kitchen." Even as the Republic's future remains unknown, we see the ultrarich doing little more than taking hot baths, eating elaborate meals while reclining on plush furniture, and having sex with women, men and teenagers.

On the other hand, the notion of protecting yourself and your family from disgrace rears its head repeatedly. The Romans are sexual opportunists, yet when a man's son prostitutes himself to a member of Atia's staff, instead of accepting it, the man seeks revenge -- how else? -- by gang-raping the staff member. Yes, nothing restores honor to a family quite like forced sodomy.

And Vorenus, a reasonable enough man with a big heart, actually contemplates killing his dead wife's child in order to protect his honor. As long as the child exists, there's a reminder that his wife cuckolded him. The fact that he was gone for eight years and was presumed dead doesn't seem to factor in Vorenus' equation.

Of course, the graceless Titus Pullo, whose brute strength and background of casually murdering men with his bare hands is so often at odds with his generous nature, still embodies this cultural paradox the most comically. Before proposing to his former slave, Pullo says, "I know I didn't get us started off on the right foot, killing your man and all, and I'm sorry for that." She looks upset for a moment, but then begrudgingly accepts his proposal nonetheless.

HBO's "Rome" exposes a culture in conflict with itself, populated by human beings who are torn between upholding some semblance of civility and resorting to brutal tactics to get what they want. Unfortunately, outside of this struggle between our potential for savagery and the taming influence of civilization, this tale of life in Rome after Julius Caesar's death lacks the strong perspective of a passionate author with ideas and angles and a story to tell. The world portrayed here isn't nearly as evocative or as richly imagined as David Milch's small town of Deadwood or the Baltimore of David Simon's design in "The Wire." The characters of "Rome" hide behind their fortresses, insulting each other, sleeping together, killing in pursuit of power or vengeance, but they remain half-formed, and their world is a two-dimensional maze of columns and fountains and well-appointed bedchambers. Outside of their palaces, we see nothing but back alleys populated by wild-eyed lunatics and freaks, or open stretches of countryside. With a production budget of $100 million, shouldn't we expect to see the city of Rome, in all of its glory? Shouldn't we hope for a fresh, imaginative take on this oft-repeated story? The second (and last) season of this series features strong performances by capable actors, lovely sets, reasonably interesting dialogue -- but it all adds up to an experience that's merely adequate. The producers of "Rome" had the resources to create a memorable work of art, something rich and nuanced and layered that would provide a brand-new slant on an old story, but instead all we get is a pleasing but not quite memorable bit of entertainment.