"Tears of the Black Tiger"

This cult favorite may be an ode to a particular style of Thai filmmaking, but its canvas is universal. 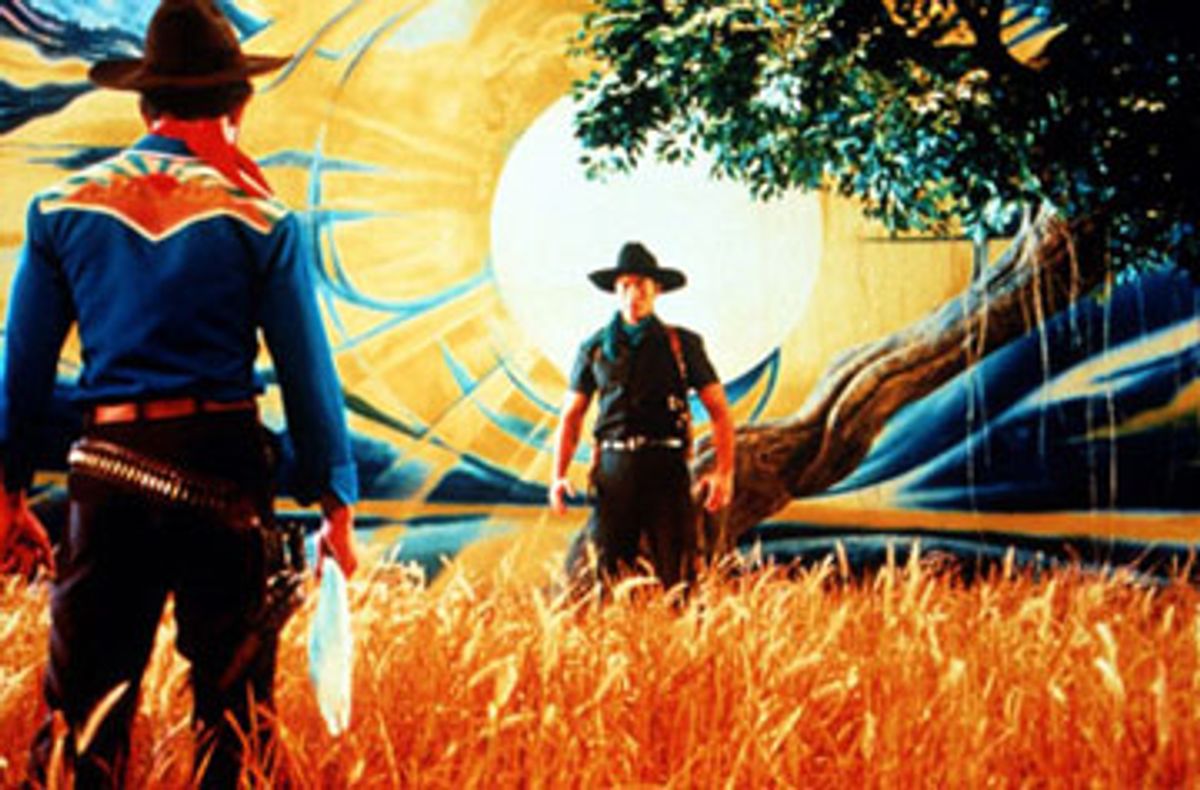 Thai filmmaker Wisit Sasanatieng's lyrical, lysergic western "Tears of the Black Tiger" wowed audiences at the 2001 Cannes Film Festival, where it was scooped up by Miramax -- and then, in fairy-tale-princess fashion, locked in a tower for years so no one could gaze upon it. Miramax, historically a greedy, jealous and very fat king, has a horrific track record of acquiring Asian-made films and then either hanging onto them until they're old and bewhiskered or dumping them quietly into theaters, often with chunks chopped out of them. (As a 2005 piece by Edward Jay Epstein in Slate explained, Harvey and Bob Weinstein actually made money by keeping certain movies out of sight.)

But Asian-film enthusiasts, the knights in shining armor in this story, have always done what they could to leap the Miramax moat, including sharing sources where DVDs of movies like "Hero" -- one Miramax acquisition that languished for years before hitting U.S. theaters -- could be purchased. And now "Tears of the Black Tiger," a cult favorite that has previously been available only in a trimmed-down version on an import DVD, has been rescued by Magnolia Pictures, which is releasing the film in its uncut form.

But it does "Tears of the Black Tiger" a disservice to describe it as a cult picture, to pigeonhole it as a crazy novelty that will appeal only to a very small and select audience. Sasanatieng conceived the picture as an homage to old Thai genre movies, colorful pictures that mixed and matched elements from Hollywood cowboy movies and melodramas, particularly those made in the '50s and '60s by Rattana Pestonji, who's considered the original Thai independent filmmaker. "Tears of the Black Tiger" -- which is a western and a love story, a tale of doomed romance and of loyalty and betrayal among men -- may be an ode to a particular style of Thai filmmaking, but its canvas is actually universal: This is a scrapbook, a happy jumble, of many of the things we instinctively respond to in movies: color, shape, sound and movement, all intensified by heightened emotion. It begins as an exploration of movie conventions only to end up confirming the power those conventions have over us: In "Tears of the Black Tiger," feeling trumps moviemaking cleverness every time.

Sasanatieng -- who also wrote the script -- begins his story simply and then shifts backward and forward in time, filling in the layers of his story until every bare spot has been filled in. He shows us a beautiful young woman, whose name, we'll later learn, is Rumpoey (Stella Malucchi), approaching a small shelter surrounded by illusory-looking blue-green leaves. She's wearing a fuchsia dress with a full, '50s-style skirt, and she carries a small tan suitcase and a floral umbrella: Sasanatieng and his cinematographer Nattawut Kittikhun fan out this array of colors as if they were arranging music.

It soon becomes clear that Rumpoey is waiting for her lover (we see his movie-star-handsome face in the small photograph she carries with her). The two have planned to run away together -- but we know, as she does, that he's not coming. And from there, Sasanatieng builds a rich and sometimes nuttily convoluted story about the mystery man in Rumpoey's life, formerly a peasant boy named Dum, now a cowboy outlaw known as Black Tiger, a man who can kill a baddie instantly by firing a single ricocheting bullet in the opposite direction. Black Tiger (he's played by Chartchai Ngamsan, an actor with a broad, noble brow and dark, cautious eyes) has fallen in with a band of outlaws -- they ride on horseback across decidedly un-western-looking plains, with phony Morricone as their soundtrack -- avenging bad deeds and the like. Black Tiger has one close friend, Mahasuan (Supakorn Kitsuwon), and we immediately know he's no good, because his pencil mustache isn't even drawn on: It's two slivers of black plastic tape, and sometimes it's in danger of falling off, particularly when Mahasuan throws his head back to laugh heartily at Black Tiger's lovesickness.

But Black Tiger perseveres, continuing to play his lonely harmonica (a gift from his beloved) against an obviously painted backdrop, a psychedelic faux van Gogh swirl of white sun and striped-yellow sky. "Tears of the Black Tiger" -- with its separated lovers, its betrayals, its outlandish action-packed showdowns, and most notably, its knockout poster-paint colors -- is a movie that sometimes seems powered by sheer conviction. It moves in rhythms that are both bizarre and completely predictable. Sasanatieng doesn't always have the best sense of pacing: The last third of the picture feels as if it needs to be streamlined, speeded up. Still, the uncut "Tears of the Black Tiger" is more powerful than the cut version, not least for the way it shows that Sasanatieng, even amid all the craziness, takes care to tie up even the loopiest plot details.

Asian-film fans have every reason to be excited about seeing "Tears of the Black Tiger" in its original form, but I hope it finds an even broader audience. Sasanatieng, like a reckless race-car driver, often swerves closer to sentimentality than anyone should dare. Then again, one person's sentimentality is another's deeply felt emotion. Maybe we're too busy assigning meaning to feelings, when sometimes, the best you can do is to give them their own colors.