The more casual, spontaneous precursor to the Academy Awards honors some unexpected newcomers -- and plenty of unexpected remarks. 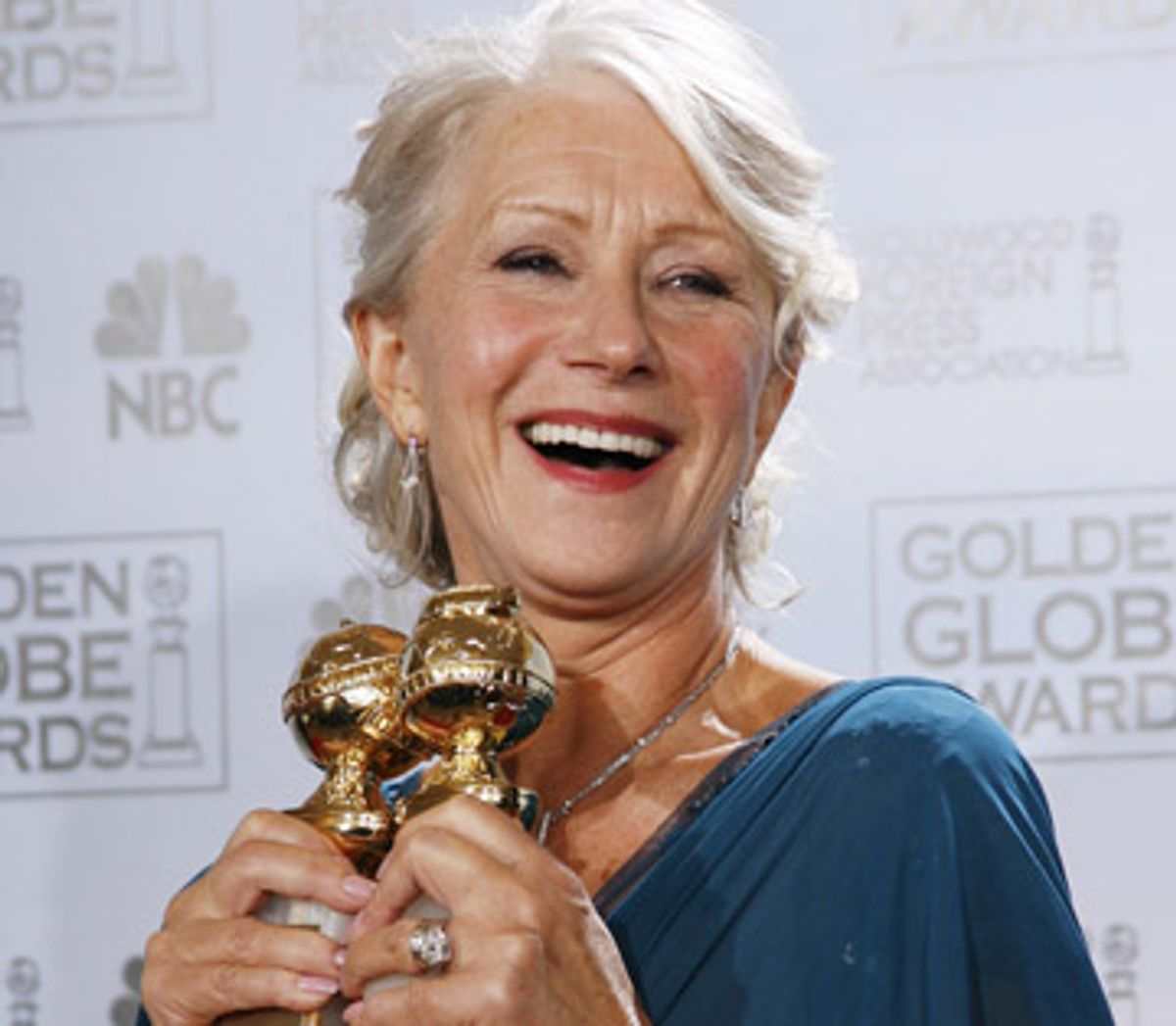 Monday night's Golden Globes included a bevy of unexpected winners, from Sacha Baron Cohen (who won best actor in a musical/comedy for "Borat") to Eddie Murphy (who took home his first major award, best supporting actor for his role in "Dreamgirls"). But the unexpected comments were the highlight of the night.

Isaiah Washington got things off to a good start on the red carpet when, in a clumsy attempt to make up for his alleged homophobic slurs on the set of "Grey's Anatomy" earlier this season, he announced, "I love gay. I wanted to be gay. Please let me be gay." Yes, please let us be gay, too. Let us be a gay, black man. No, let us be a straight, Latino teenage girl. No, maybe we'd rather be a thriving rhododendron, or a hamster with an outgoing personality ...

Then again, we might want to be a female actor, now that they're not all hungry-looking beauty queens. Amazingly enough, this was a very good year to be a nonwhite, non-anorexic woman (Jennifer Hudson won best supporting actress for her role in "Dreamgirls," America Ferrera won best actress in a TV comedy for "Ugly Betty," and Shonda Rhimes' "Grey's Anatomy" won best TV drama) or an older woman (Helen Mirren won for lead roles in both "The Queen" and the HBO miniseries "Elizabeth I," and Meryl Streep won a best supporting actress award for "The Devil Wears Prada").

Of course, what we all really want to be is Jack Nicholson, with his perpetual grin of self-satisfaction and his excellent courtside seats at Lakers games. Since sometime in the early '90s, award winners at both the Golden Globes and the Oscars can hardly get to the part where they thank their agents without interrupting themselves either to say "I can't believe I'm staring at Jack Nicholson right now" or to address Jack directly by his first name. Jack invariably responds with that inscrutable grin and, if they rate in his book (which means they're either a Hollywood legend or Kobe Bryant), he growls something witty that the microphones can't pick up.

But even with big names like Warren Beatty, Clint Eastwood, Meryl Streep and Dustin Hoffman around, there were still lots of fresh, unexpected faces in the crowd this year. When accepting her award, "American Idol" finalist and "Dreamgirls" actress Hudson gushed, "I have always dreamed, but I never ever dreamed this big!" Then she added, "You don't know what this does for my confidence!"

Despite being referred to as "ugly" constantly, Ferrera's confidence got a boost as well when she beat out Felicity Huffman and Marcia Cross of "Desperate Housewives," Julia Louis-Dreyfus of "The New Adventures of Old Christine" and Mary-Louise Parker of "Weeds." (As nice as it is to see so many female-dominated comedies on the air these days, it's a little sad that women have to be referred to as desperate, ugly, old or stoned to catch our attention.)

"It's such an honor to play a role that I hear from young girls on a daily basis how it makes them feel worthy and lovable and they have more to offer the world than they thought," Ferrera rambled weepily. Such an unforeseen burst of heartfelt sweetness assured that there wasn't a dry eye in the room. The camera quickly cut to a bunch of actresses blinking back tears: Salma Hayek, Jeanne Tripplehorn, Teri Hatcher, Annette Bening, Jada Pinkett Smith ... Then Ferrera twisted the knife by thanking her mom and -- gulp! -- calling her "Mommy." Hey! That's my mom's name too. (Sniff.)

Of course, such bashful remarks didn't erase every last tiresome Hollywood tic. At least, instead of thanking their agents by name, most winners thanked "my team" (a catchall category that presumably includes agents, managers, stylists, personal trainers and Reiki healers). But when Kyra Sedgwick won best actress in a TV drama for her lead role in TNT's "The Closer," she came across -- as so many actresses do -- as both affected and caught off guard. (Are those affectations so deeply ingrained that they're around even when an actress is being spontaneous, or is that pseudo spontaneity just another affectation?) Sedgwick also skipped the "team" catchall and thanked her publicist and her lawyer by name. Yawn. Why not haul them all up onstage while you're at it, so a whole crowd of professionals can cheer at the flawless inhuman human being they've created?

There were plenty of odd moments onstage, though, starting with the confusion and long silence that followed Justin Timberlake's announcement that Prince had won a Golden Globe for best original song for "The Song of the Heart," which he wrote for "Happy Feet." Timberlake looked around for several moments, clearly expecting Prince to come up to the stage, but when he never showed, Timberlake said, "I guess Prince couldn't be here, so uh ...," and then, bending down so that he was about a foot shorter, "I'd like to accept this award on his behalf!"

At the one-hour mark, there was Prince, at the table right behind Eddie Murphy. Was His Highness late, or in the bathroom getting high? Hugh Grant cleared up the mystery, announcing that Prince had been stuck in traffic, and added, "Very easy to get caught in your car in this town!" Ahem. There were a few titters, but not the rousing laughter you'd expect. I guess Hollywood Boulevard prostitutes are no longer the fashionable accessories they once were.

Second only to older women and women of color among the honorees were British men, who can always be relied on to abandon the formal thank-you speech and get a little weird. Hugh Laurie won the award for best actor in a TV drama, and after thanking the "wonderful crew" on "House," he digressed entertainingly: "I know that everyone says they have a wonderful crew but logically that can't be the case, they can't all be wonderful. Somebody somewhere is working with a crew of drunken thieves, but it's not me. They are truly a wonderful collection of people, and I am privileged to spend my days in their company, and they smell of newly mown grass."

Then there was Bill Nighy, who, after winning best actor in a TV miniseries or movie, remarked, "I used to think that prizes were damaging and divisive until I got one. And now they seem sort of meaningful and real."

But the most bizarre comments of the night came, not surprisingly, from Sacha Baron Cohen, who took home best actor in a comedy or musical for "Borat: Cultural Learnings of America for Make Benefit Glorious Nation of Kazakhstan":

"I saw some dark parts of America, an ugly side of America, a side of America that rarely sees the light of day. I refer, of course, to the anus and testicles of my costar, Ken Davitian ... And then when my 300-pound costar decided to sit on my face and squeeze the oxygen from my lungs, I was faced with a choice: death, or to breathe in the air that had been trapped in a small pocket between his buttocks for 30 years. Kenneth, if it was not for that rancid bubble, I would not be here today."

Tom Hanks also veered into off-color territory in presenting Warren Beatty with the Cecil B. DeMille award for lifetime achievement. After marveling that Beatty won "Most Promising Newcomer" back in 1962, he went on to rave about Beatty's "balls" ("and by balls, I mean artistic vision") over and over again, nine times by my count. The running joke not only didn't get much of a laugh but even seemed to make the unflappable Beatty slightly uncomfortable.

Upon accepting his award, Beatty expressed envy over Eastwood's career. "Clint, please, are we not friendly? I don't understand. First you do one great movie right after another movie, then you've gotta go do two more movies that are just as great as the first two movies, but you've gotta do them at the same time, no less, and you've gotta do the score? How do you think that makes me feel?" Beatty wrapped it up by snatching the "most touching speech" honor straight out of Ferrera's hands, addressing his wife, Annette Bening: "Thank you for our life together, and for making me feel that I am always your most promising newcomer." Aww. Wait, was he trying to be dirty?

Since this year's proceedings were all about balls and rancid bubbles, the only vaguely political comments came at the very end of the night, when California Gov. Arnold Schwarzenegger presented "Babel" with the best picture award. Director Alejandro Gonzalez Inarritu took the statuette and quipped, "I swear I have my papers in order, governor, I swear!"