Why I defend "terrorists"

An open letter to Cully Stimson, deputy assistant secretary of defense for detainee affairs, from a lawyer representing five men at Guant 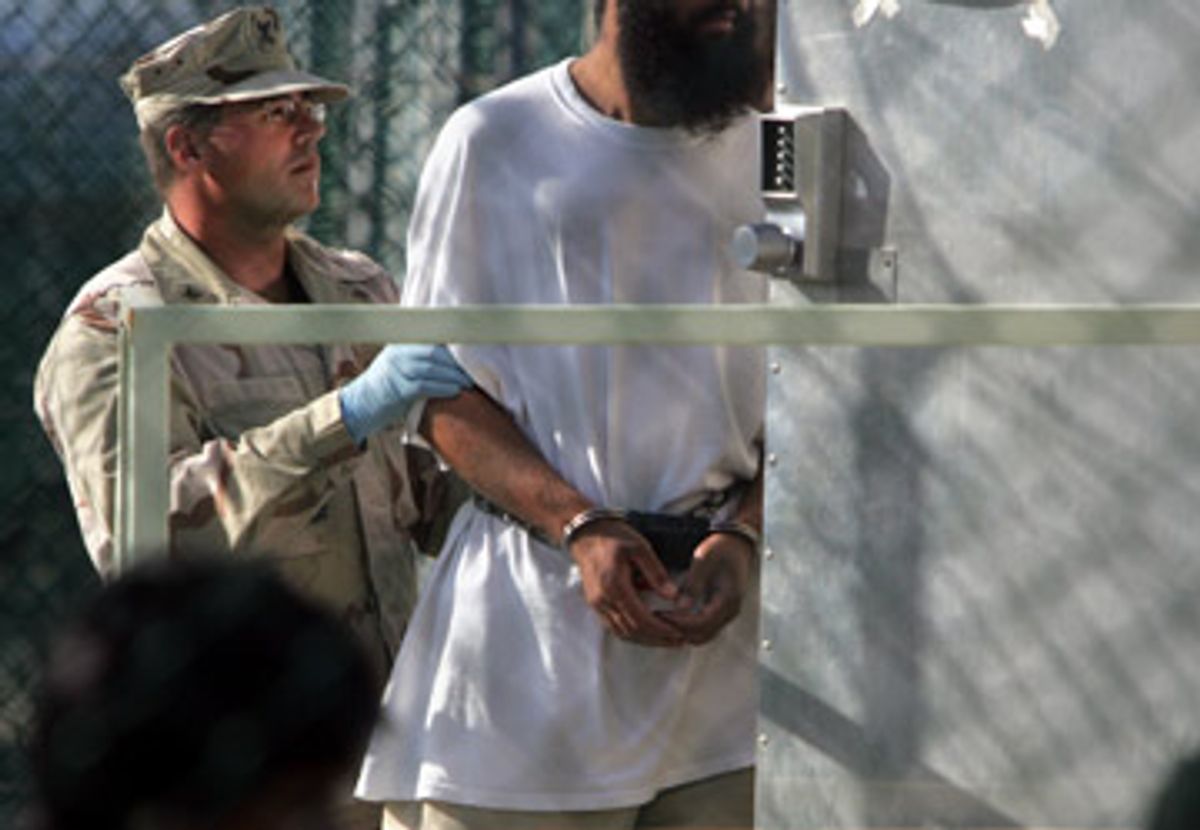 I am an associate in the Washington office of Weil, Gotshal & Manges LLP, a New York-based, international firm with 1,100 lawyers. I practice general corporate litigation. I also represent, on a pro bono basis, five men who are being held as "enemy combatants" at the U.S. detention center in Guantánamo Bay, Cuba. "How can you defend terrorists?" is a question I'm sometimes asked when people learn about my pro bono work. On Jan. 11, in your capacity as the deputy assistant secretary of defense for detainee affairs, you asked the same question of every lawyer representing detainees in Guantánamo.

During the course of an interview on Federal News Radio, you named my law firm and 13 others whose attorneys have clients in Guantánamo and urged our corporate clients to take their business elsewhere. "You know what, it's shocking," you told your audience. "I think, quite honestly, when corporate CEOs see that those firms are representing the very terrorists who hit their bottom line back in 2001, those CEOs are going to make those law firms choose between representing terrorists or representing reputable firms." You then said our efforts might be funded by "monies from who knows where."

Mr. Stimson, I don't defend "terrorists." I'm representing five guys who were held or are being held in Guantánamo without ever being charged with a crime, some of them for nearly five years. Two have been quietly sent home to Saudi Arabia without an explanation or an admission of error. The only justification the U.S. government has provided for keeping the other three is the moniker "enemy combatant," a term that has been made up solely for the purpose of denying them prisoner-of-war protection and civilian protection under the Geneva Conventions. It's a term that was attached to them in a tribunal proceeding so inherently bogus that even the tribunal president is compelled to state on the record, in hundreds of these proceedings, that a combatant status review tribunal "is NOT a court of law, but a non-judicial administrative hearing."

And, lest there be any doubt, Mr. Stimson, we are not receiving any money for this. My firm's work is pro bono. At the end of the year, the partners set aside a substantial portion of the firm's profits to pay for my trips to Guantánamo and my translation costs, just as they pay for my colleagues' fight for clean drinking water in the lower-income neighborhoods of D.C., as well as hundreds of other projects I would be happy to discuss with you directly.

I also get asked other questions about my pro bono work, Mr. Stimson. "How can you defend terrorists?" is only the third most common. The second most common question is, "Why do you do it?" In law school, I would feel outrage whenever I read about a case in which our courts had the opportunity to take a stand -- against slavery, against the internment of Japanese-Americans during World War II -- and didn't. But I would also feel self-doubt. It's easy to feel righteous anger now. But, I wondered, would I have felt it then? Or, in the name of security, of easing the anxiety of the public, would I have been able to swallow these affronts to the freedoms I see as the cornerstone of our national identity? The people I'm defending were caught up in the adrenaline and paranoia of our nation's darkest hour. All we're asking for is a fair hearing. Why does this frighten you so?

Mr. Stimson, you should also know that I am frequently mistaken as being Middle Eastern or Latino (no and no; the correct answer is "Indian"). In November 2001, I was walking to dinner in the trendy Dupont Circle area of Washington, D.C. Just as the sun was going down, I heard a car slow to a halt behind me. "Hey, you, dumb blonde," yelled the driver to my date, "can't you see he's a terrorist?" He then sped off.

Dehumanizing people makes it easy to believe the worst about them. When they look different from you, when they sound different, it becomes easier, and when you dress them in identical uniforms and lock them in cages, it becomes easier still. All I've been trying to do for the past two years is give my clients a chance to challenge the assumptions that have been made about them.

And finally, Mr. Stimson, the question I get asked more than any other is, "How can a place like Guantánamo continue to exist?" I think it is because we as a nation are afraid to admit we've done something wrong.

There is a widespread belief, as well as a need to believe, that the men we're holding in Guantánamo must be bad people. They must have done something to end up there. They couldn't just be, in large part, victims of circumstance, or of the fact the U.S. government was paying large bounties in poor countries for the identification and capture of people with alleged ties to terror. If the bulk of the detainees are guilty of nothing but being in the wrong place at the wrong time, if there's no evidence that some of them did the things of which the government has accused them, then it would mean that we locked innocent people in a hole for five years. It would mean not only that our government wrongfully imprisoned these men but that the rest of us stood idly by as they did it. It would mean that we have learned nothing from Korematsu v. United States, that we have learned nothing from the McCarthy-era witch hunts, and that when we wake up from this national nightmare, once again we will marvel at the extremism we tolerated in defense of liberty. It would mean that even as we extol the virtues of fairness and due process abroad, we take away those very rights from people on our own soil.

The Rev. Martin Luther King Jr. once wrote, "Injustice anywhere is a threat to justice everywhere." It is my belief that the true test of a nation's commitment to liberty occurs not when it is most readily given, but rather when it is most easily taken away.

Mr. Stimson, that is why I do what I do.

Anant Raut is a graduate of Yale University and Harvard Law School. He spent two years at the Federal Trade Commission litigating antitrust cases, and is now a litigator for the law firm Weil, Gotshal & Manges LLP. The firm has provided habeas representation for five detainees in Guantanamo Bay on a pro bono basis since January 2005.