Carly Simon talks about her newest album -- a collection of lullabies -- remodeling her kitchen and why we're still obsessed with "You're So Vain" after all these years. 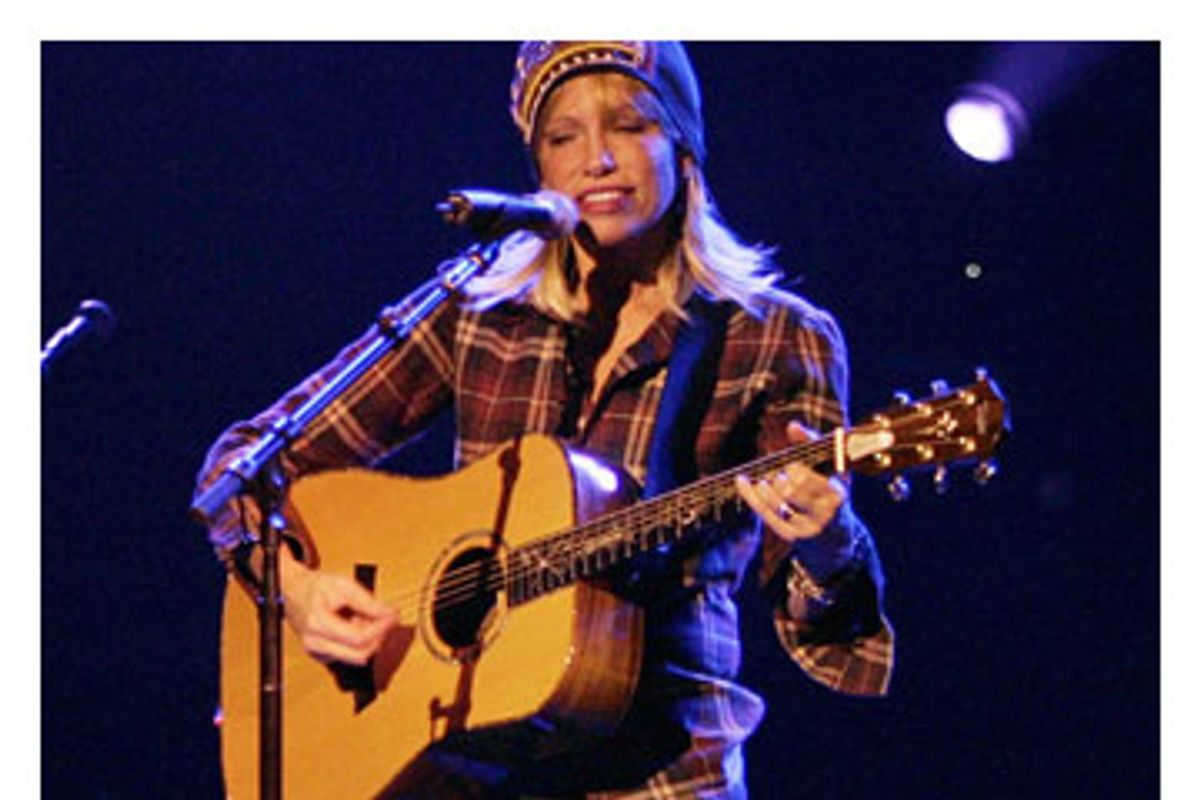 Part of the new breed of singer-songwriters to emerge in the early '70s, Carly Simon made her name with songs like "Anticipation," "Nobody Does It Better" and, most famously, "You're So Vain" (purportedly about either Warren Beatty, Mick Jagger or James Taylor), which mixed personal confession with strong pop melodies. But with her last two albums, 2005's "Moonlight Serenade" and the new "Into White," Simon has turned her artistic attention away from her personal life and onto interpreting the work of others.

Conceived, with some supportive prodding from her record label, as a collection of lullabies, the serene "Into White" features Simon and a ramshackle gang of collaborators (including her children Ben and Sally Taylor) joining together on songs like "Over the Rainbow," "Blackbird" and "Scarborough Fair." Don't make the mistake of thinking the album's tranquil mood is reflective of Simon's own personal state of mind, though. "That has nothing to do with it," she says. "It doesn't matter whether I'm climbing an ice-cap mountain, I could still sing any of these lullabies."

Salon spoke with Simon by phone as the singer was recuperating in New York from a hectic round of publicity made even more strenuous than usual by a bout of mononucleosis.

How did the album come together?

What I was going to do was do another album like "Moonlight Serenade" if, in fact, "Moonlight Serenade" sold over a certain amount of copies. But it didn't sell over that amount so I probably would have been free to go anywhere, but in the nick of time I got a request from Jay Landers [then head of A&R at Sony] who thought that my name was synonymous with lullabies and would I do a lullaby album.

Seeing as how the last two albums haven't afforded you the opportunity to vent, are you able to find other avenues for getting your feelings out?

Well, I still write the lyrics. The fact that they haven't culminated in an entire album doesn't mean that they won't. I'll always be able to relive those moments and I'm sure I'll be writing new songs based on how I feel. I'm a labile person. I get my feelings hurt incredibly easy and my whole outlook on my relationship changes in the course of five minutes -- only to change back again in another 10. It's always a matter of catching them. Sometimes I get lazy and I just don't travel around with a pad and pencil and a tape recorder.

You've had a long, successful career. Are you still concerned with how well an album is going to sell?

Yes, because I'm building a new addition on my house. I've never had a kitchen in my house -- which sounds totally retarded -- but I've lived in a kitchen that we built when I was first married in 1972 [to James Taylor, whom she divorced in 1983; she has been married to businessman James Hart since 1987] and it was definitely a hippie kitchen and I've never enlarged it from that time. Now I'm finally building myself a kitchen that is going to spare nothing. So, yes, I'm interested. I don't tour, so I don't make the kind of money that you expect people in rock 'n' roll to make. I need to make my money from my records.

Both your children are on smaller record labels and presumably that affords them a certain amount of freedom with their musical choices. Are you envious?

I really like my relationship with Columbia. I think they like their relationship with me, if it goes forward, if this record doesn't lose them money or if they do a little bit better than breaking even ... But we got really lucky; we got Starbucks [where "Into White" is being sold] and we did "Oprah" and we just did QVC [Simon performed on the shopping channel earlier this month]. So those are three major areas of exposure. And now with Salon.com, we've got it covered.

In reading other articles about you, there's sort of the sense that doing an interview with you is a prickly proposition. Do you think the public perception of you has been accurate?

That there was certain subject matter I should stay away from.

There's nothing I'm sensitive about talking about. I'm one of the most open people you'll ever meet. It's true that I have been... I have mononucleosis now and Epstein-Barr syndrome. So, I'm just kind of tired and sick.

I was told that you were sensitive to the idea that you were copying Rod Stewart [who's had recent success with albums consisting of non-original material]?

You mean with "Moonlight Serenade"?

Right. Do you feel that there is the perception that you are trying to hop on a bandwagon?

"Moonlight Serenade" was your highest-charting album since the '70s. Does it all feel like sort of a backhanded compliment considering that it contained material you didn't write?

Not at all. I was totally thrilled. But I also don't think that has very much to do with what my best work is. I do know my best work and I'm very satisfied with my knowledge of it because I think I know better than anybody else about my work. That doesn't offer objectivity, but there is a certain way that artists have of being able to see inside themselves and when their artistry conjoins with the soul, that's the most satisfying thing that can happen to somebody who calls herself an artist.

What do you think was your best work and where does "Into White" fit relative to that?

If you want to talk about an album with my own material, I think an album that I feel the most close to is my personal album, which is called "The Bedroom Tapes." When Clive Davis was fired from Arista and L.A. Reid came along, L.A. Reid did not want to promote it. I actually bought it back, so I own that album now. So whenever is the right time I'm going to release it -- with a couple of changes and a couple of new songs on it. But that's the one that I feel is my own personal gem.

It wasn't the soul-searching album that "The Bedroom Tapes" was and that other albums with my writing have been. But "Into White" has a certain intimacy that "The Bedroom Tapes" doesn't even have because of the way it was recorded and because of the intimate nature of the almost non-studio setting. It was friends getting together and making noises that sound beautiful. It's kind of like a play group as opposed to a studio album. It's like a play group where we all have finger paints and sit on the floor and make colors.

Why do you think people are so obsessed with knowing who "You're So Vain" is about?

It's also probably time for that question to be answered. I'm finally giving you the chance to tell me whom it's about.

No, I'm sorry. It would bore you terribly.

Listen to the entire interview with Carly Simon here.