Why are ramen noodles a pilot's best friend? Plus: Northwest retires the DC-10, Boeing marks a milestone, and the heartbreak of Air-India's terrible new look. 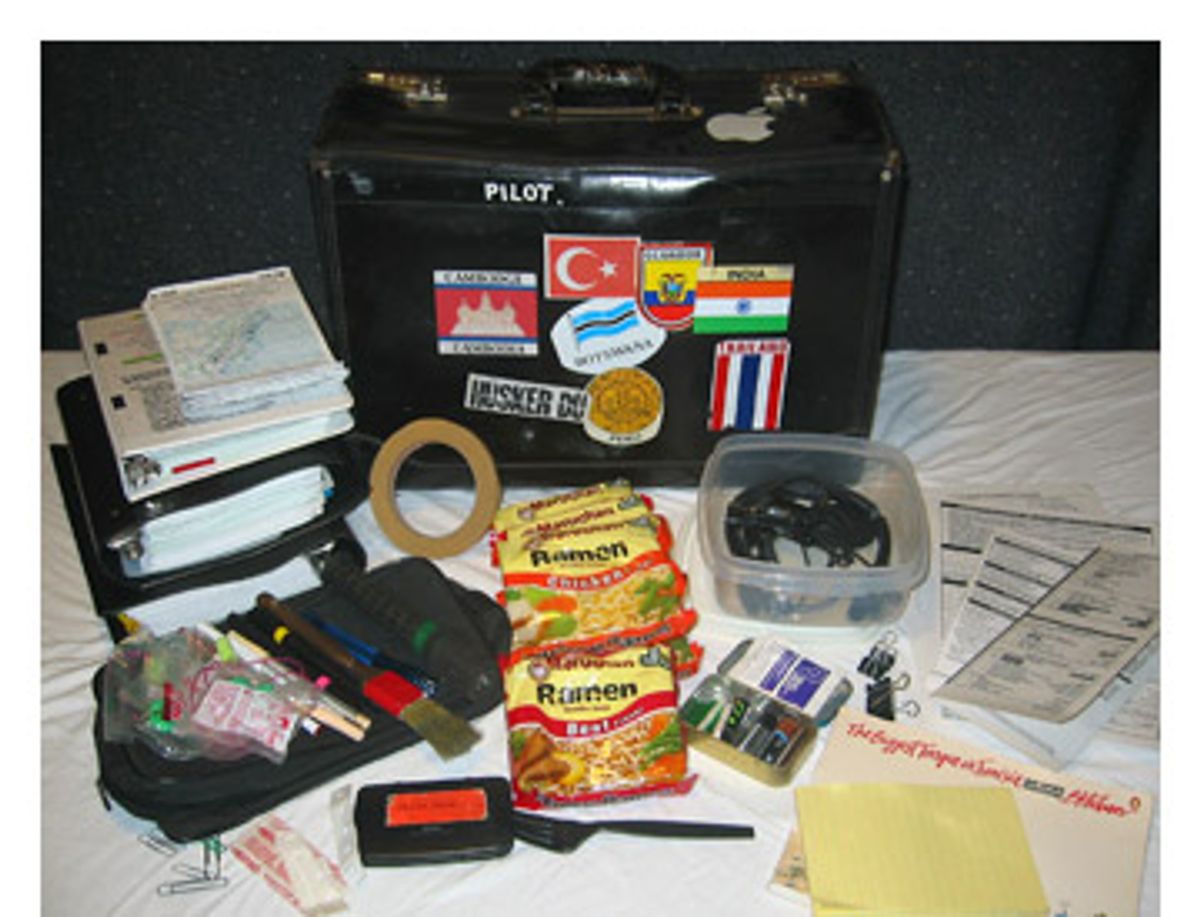 On Saturday, Jan. 6, the aviation world was rocked by tragic news. Momofuku Ando died of a heart attack in Japan at age 96. Ando was the inventor of instant ramen noodles.

A) The case itself. There's no official name for these things. It's a bag, a case, a kit -- whatever you want to call it. The one you see here was purchased new in 1990, and this is the only one I have owned. (Well, that's not entirely true, as I began my airline career using a brown leather briefcase scrounged from a stranger's garbage on Beacon Hill in Boston. A few weeks later I upgraded to the bag shown.) Some carriers do not permit stickers on crew members' luggage.

B) These binders are the bag's nerve center, and also account for most of its weight. Got a question about the anti-icing plumbing of your 757? The answer is somewhere in the Aircraft Flight Manual. Are we authorized for takeoff with malfunctioning runway centerline lights if the visibility drops below 1,000 feet? Better look it up in the General Operations Manual, a book of rules and procedures specific to the airline. There's also at least one thick volume of maps and charts. At some airlines this entire stack has been replaced by a packet of CD-ROMs and a laptop computer. "Paperless cockpit" is a term heard with increasing frequency.

C) Small vinyl bag of miscellaneous items. My stock includes pens, earplugs, a small ruler, two flashlights, paper clips, wipes, a Band-Aid. The paintbrush is used to clean dust from around aircraft radio panels and other cockpit instruments, which are sometimes filthy.

D) A roll of masking tape. Surprisingly useful for any number of tasks (no jokes, please, about holding the wings on).

E) My indispensable, $6.95 calculator. (This very same instrument is visible here, in action, as it were, and my embarrassing dependence on calculators was discussed in a prior column.)

G) Notepaper. Necessary for copying clearances, for jotting down frequency changes, and for sketching out rough drafts of seething letters to the editor during those long stretches aloft.

H) A copy of B. Kliban's "The Biggest Tongue in Tunisia and Other Drawings." It helps to have something humorous on hand for those 90-minute air traffic control ground holds. (Kliban essentially invented the one-panel cartoon, and I'm a proud owner of his full library. Other regular take-alongs are copies of Air Transport World and any of Stephen Dobyns' poetry collections.)

K) Assorted technical cards. We see a checklist, a de-icing-procedures flowchart and something called a "flight conduct chart."

If you fail to grasp why ramen noodles would be an imperative part of my repertoire, you've never been a very hungry and very broke pilot checking into a motel at midnight for an eight-hour layover. There are tastier things to eat, but ramen is cheap, it never goes bad, and its rapid cookability ensures you're rested in time for that 6:30 wakeup call.

The cellophane brick variety is preferable to the kind in Styrofoam cups because it's easier to pack and impervious to damage. Directions: 1) Rinse out the filter basket assembly of your hotel room coffee maker; 2) crush noodle brick into the carafe; 3) partially fill coffee maker with water, and switch on; 4) once carafe is full, wait three minutes; 5) drain carefully, add flavor packet, turn on Comedy Central and enjoy.

Don't overfill, and always be sure the filter basket is clean, as coffee-flavored ramen is even worse than "Creamy Chicken." Remember to carry a plastic fork (to replace the metal one stolen by the TSA), or you'll be forced to eat with your hands, or by holding two pencils in the shape of chopsticks. (If need be, you will do it, because you're that hungry, and you will feel ashamed about it the next day, when you're exhausted again and wondering if maybe you should have joined a troupe of traveling mimes instead of giving your life to the airlines.)

For a touch of the exotic -- in other words, marginally less pathetic -- spice up your snack with the addition of Huy Fong Foods-brand chili garlic hot sauce, available at most grocery stores. It's the one with the rooster on the bottle. It's true that upscale supermarkets often stock an extensive selection of art ramen, but if you're a commuter pilot making 14 grand a year, it's strictly the five-for-a-dollar brands.

The late Momofuku Ando developed his noodles in the late 1940s during food shortages in postwar Japan. Two years ago, the company he founded, Nissin Food Products, introduced a vacuum-packed ramen for the benefit of Japanese astronaut Soichi Noguchi on board the U.S. space shuttle Discovery. No word if Nissin ever thought about targeting airline workers, but I can attest to the product's easy adaptability to a life aloft.

Other early returns for 2007

First, a sneak peak at the latest airline livery abomination. There's been no shortage of these lately, but this one is particularly disappointing because it afflicts Air-India, until now wearer of my all-time favorite color scheme. Here's the original, shown to gorgeous advantage on a 747. How can you not love it, from the Rajasthani palace window frames to the Nike-style fin flash? It's exotic, classic, understated, refined. All airlines should be those things.

Now for the update, depicted here on what I believe is a pre-delivery Boeing 777 at the factory near Seattle. The window arches and striping look emaciated. That scrambled egg on the tail is a bastardized version of the carrier's elegant Sagittarian centaur logo. He appears to have been electrocuted. (As for why an Indian company would choose a symbol from European mythology for its emblem, please revisit the archives.) Air-India has started naming its 777s after Indian ragas ("Hamsadhwani," "Kalyani," "Neelambari"), but its uniform, like too many airline makeovers these days, gets all gimmicky and flashy, selling out a part of its identity in the process.

Closer to home, and speaking of the Boeing factory, congratulations to Boeing on the milestone sale of its 1,500th 747. The plane that nearly bankrupted the company more than 35 years ago is now its third-best-selling model, bettered only by the 727 (out of production since 1984) and the eternally popular 737. The 1,500 figure dates to the classic-100 model, delivered to Pan Am in 1970. Four baseline variants -- the -200, SP, -300 and -400 -- have since been produced, and judging from interest in the upcoming 747-8, the iconic wide-body should enjoy another generation of success. (Little-known fact: Yours truly was aboard the inaugural international voyage of a 747-400, from New York to Tokyo on June 1, 1989, and still has one of the commemorative wooden sake cups given away to passengers.)

All together, just under a thousand 747s are currently in service. It surprises people to learn that the population of 747s is roughly equal to that of either the 757 or the 767 (1,000 and 870, respectively, give or take a few). In the United States, even at major hubs, a 747 can be an extremely rare sighting, while its little brothers seem to be everywhere. Of the U.S. majors, Northwest has the largest fleet, numbering about 45.

One aircraft you won't be seeing on the Northwest concourse anymore is the McDonnell Douglas DC-10. On Jan. 7, the airline retired the last of its DC-10s from regular passenger service. The three-engine wide-body debuted with Northwest in 1972. The ship used for the last flight, photographed here, rolled from the factory in 1980. On its final mission, operating as Flight 98, it landed in Minneapolis from Honolulu just after sunrise on Monday morning, Jan. 8. Among the passengers were several employees and airliner enthusiasts.

Not me. Having grown up in a Northwest family, I have logged way too much time on those big old birds, believe me, including my worst-ever experience on a commercial airline flight -- a nine-hour slog from Boston to Copenhagen, Denmark, in the middle seat of the smoking section, in October 1988.

Worldwide, few DC-10s remain in passenger service. The type has carried tens of millions safely in a career spanning three and a half decades, but was plagued by a series of problems early in its history. A faulty cargo door design was partly to blame for a horrific Turkish Airlines crash outside Paris in 1974, and the DC-10 remains the only U.S.-made jetliner ever to be temporarily grounded by the Federal Aviation Administration, following the tragedy of American Airlines Flight 191 at Chicago-O'Hare in 1979.

Old news, bad karma. Instead of talking about disasters from 30 years ago, we ought to be celebrating how the year just past ranked as the second safest in civil aviation history.

According to Ascend, a consultancy division of the highly respected Airclaims company, airlines worldwide suffered just 13 fatal accidents in 2006, killing a total of 790 people. Only 2004, with 11 fatal events, was more impressive.

The deadliest incident of '06 was the crash of a Pulkovo Airlines Tupolev Tu-154 in Ukraine last August, in which 170 passengers and crew perished. In the United States, the year's worst tragedy -- indeed the worst since 2001 -- was that of Comair Flight 5191 in Lexington, Ky., on Aug. 27. Forty-nine people died when the regional jet attempted an early-morning takeoff from a too-short runway.

A separate group, the Geneva-based Aircraft Crashes Record Office, reports even better results. ACRO uses somewhat different criteria, accounting for any serious accident, fatal or otherwise, involving a plane able to carry at least six passengers. ACRO puts the number of accidents at 156. That's a higher total than Ascend's, but by ACRO standards it's the lowest in 53 years! And a full 16 of those mishaps involved Soviet-era Antonov planes, several of them on ad hoc charters or quasi-military flights in remote areas.

So the news is good, though I realize public perception isn't necessarily in sync. It's human nature to be anxious about flying, and it only takes one or two high-profile events to affect what the experts call "salience bias," a term for the sway of public opinion based on exposure rather than broader statistics -- in this case, the notion that flying is dangerous despite ample evidence to the contrary: Close to 6 million people take to the air each day, with the number of annual catastrophes countable on one hand. Globally, we're recording fewer total accidents, and fewer fatalities, than we did a quarter-century ago, with twice as many people flying on twice as many planes. The International Civil Aviation Organization says that global air travel grew by 4 percent in 2006, boasting a record 2.1 billion passengers.

"Well below the long-term trend" is how Ascend describes the encouraging numbers from 2006. "Given the 34 million flights worldwide, and aviation's rapid expansion," said Gehan Talwatte, managing director of Ascend, in a statement. "Our data shows just how seriously the entire industry takes its responsibilities." Not long ago, in light of the remarkable growth of air travel in places like Brazil, India and China, prognosticators were warning of aircraft hull losses approaching one per day. (Brazil has seen traffic expand by 18 percent in the past two years; in India it's closer to 100 percent.) We're not seeing that.

At the same time, throwing out a statistical bone in response to every air safety question can be misleading, and trends can turn for the worse. Certainly 2007 got off to an inauspicious start. No sooner had ACRO and Ascend finished collating their dossiers for '06 when, on New Year's Day, an Indonesian jet went missing near the island of Sulawesi, presumably killing all 102 people aboard. The Boeing 737 was flown by Adam Air, a 4-year-old Indonesian upstart.

What the results from '06 portend for '07 depends, maybe, on how cynical a forecaster you are, but the smart money bet says no significant changes.