Is Harold Ford built for the road ahead?

The DLC proves it's living in the past by picking the failed senatorial candidate as its new chairman. 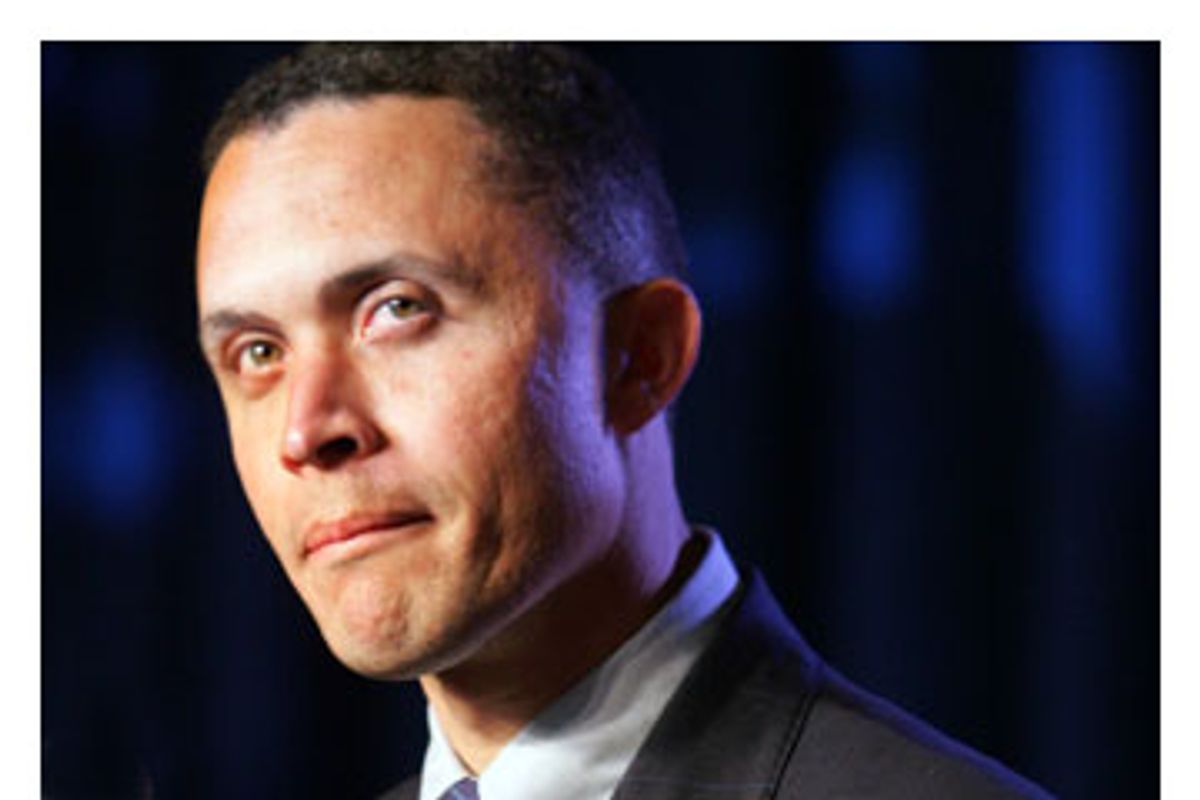 In the final weeks of the 2006 campaign, one could barely turn on the national cable news or talk shows without seeing Harold Ford. And whenever one did see Ford, he was pandering.

There was the Democratic Senate nominee in a Tennessee restaurant, wearing a camouflage baseball hunting cap and talking about how powerful his Jesus was. There he was endorsing ex-Democrat Joe Lieberman in Connecticut and piling on John Kerry. There he was with his dander up about the New Jersey same-sex marriage ruling. Most egregiously, there was Ford, a 37-year-old black man, telling the MSNBC anchor who asked him if he thought the infamous Republican ad with a white girl telling Ford to "call me" was racist, that he didn't know. Ultimately, all his pandering wasn't enough. In a year in which Democrats won six of the seven most competitive Senate races, Ford was the seventh. He lost to Republican Bob Corker by three points.

Last week, Ford accepted as consolation prize the chairmanship of the centrist Democratic Leadership Council. In many ways the marriage makes perfect sense. Ideologically, Ford is one of the most conservative black Democrats in national politics. He ran the archetypal DLC campaign in 2006, rebuking and thus affirming almost every cultural trope Republicans deploy to vilify Democrats. Smart, articulate, young, attractive and a fabulous fundraiser, at first blush Ford's face -- despite last fall's overexposure -- seems like a fresh one on the scene at the DLC.

But, much like the Republicans' selection of Florida Sen. Mel Martinez to head the Republican National Committee after an election in which the GOP hemorrhaged Latino support, tapping Ford is a backward-looking attempt to fight the last war. Somehow a young, Southern, corporate-friendly figure is supposed to rewind politics to that moment a decade and a half ago when the DLC was at its zenith -- the keeper of Washington's electoral keys in an era defined by Bill Clinton's fence-straddling "third way."

To fully understand what the Ford choice means for the DLC, consider the man Ford is replacing -- or, better yet, consider the two major national Democrats whom Ford failed to replace.

Once he announced he was running for president, Tom Vilsack was required by DLC bylaws to end his 18-month stint as DLC chairman. It was the popular Democrat's own choice not to run for a third term as Iowa governor last fall. As both a Beltway outsider and a Midwesterner, Vilsack was an interesting person to chair an organization Al From founded 20 years ago as a device for moving Democrats rightward to pacify the party's fading Southern wing. The press release Vilsack issued to announce his departure from the DLC, for example, made special mention of how he'd helped forge "a successful working relationship with organized labor leaders on mutually beneficial issues for the first time." And while DLC policy guru Will Marshall was deriding the "the activist left [as] out of sync with the American public" on Iraq, Vilsack was using his waning hours as governor to urge the Iowa Legislature to pass a resolution decrying the Bush-Lieberman-McCain escalation plan.

Advisors close to Vilsack tell me he was especially proud to help thaw the DLC's chilly relationship with labor. He also closely monitored key documents and statements from the DLC during his tenure that might later be used to depict him unfavorably in the eyes of 2008 Democratic primary voters, a demographic notably more liberal than the DLC. Harold Ford has a reputation for being less detail-oriented generally, but in this case he won't need to worry. His closer ideological fit with the organization is unlikely to foster any serious in-house political disconnect.

Where Ford may find trouble connecting is with two people who are now among the nation's most powerful Democrats, Nancy Pelosi and Howard Dean. He sought the job of one, was touted as a replacement for the other, and is an ideological peer of neither.

In 2002, Ford challenged Pelosi in the race to become House minority leader. As Anthony York noted in Salon at the time, Ford mocked San Francisco's Pelosi as a "throwback" who practiced a "destructive and obstructive" style of politics. "I don't think Nancy Pelosi's kind of politics is what's needed right now," groused Ford, sounding every bit the Blue Dog Democrat. "Nancy's message, and the course she wants to take us on, is not where America wants to go." The American public settled that dispute two months ago.

Within days of the fateful election that crowned Pelosi as the nation's first female speaker, centrist pundit-in-chief James Carville criticized Democratic National Committee chair Howard Dean for not doing everything possible to add a few more seats to Pelosi's new majority. Carville is probably right that, short of reserving the barest of post-election operating budgets, Dean should have begged, borrowed or stolen every possible cent he could and poured it into some of the closest races. But Carville's frustrations caused him to overreach, suggesting that Ford should replace Dean at the DNC. Democratic regulars settled that issue two years ago.

Perhaps Ford's arrival at the DLC signals a generational transfer of power away from Al From and Will Marshall, both of whom are about two decades his senior. Only 44-year-old DLC president Bruce Reed, the policy wunderkind of the Clinton administration, is roughly the same age as the former congressman, who was elected to the first of five terms in the House at age 26. But Ford's youth cannot mask the fact that he inherits the DLC reins at a moment when the organization finds itself increasingly out of step with the zeitgeist. A partisan wave swept Democrats back into power in both chambers of Congress after 12 years of Republican rule that began, not coincidentally, when the bipartisan, triangulating DLC was at the peak of its influence over both the Democratic Party and national policy.

Indeed, there is an imperfect, but revealing historical analogue to the situation in which Ford, the DLC and other party centrists now find themselves. In the late stages of the 19th century, Democratic New York Gov. Grover Cleveland broke the Republicans' grip on the White House by fashioning himself as an acceptably moderate Democrat willing to accede to Republicans on key policies. Like Bill Clinton, Cleveland won twice -- albeit non-consecutively -- without obtaining 50 percent of the popular vote in either election.

William Whitney, the corporate benefactor of the conservative "Bourbon Democrat" wing of the party, was a top advisor to Cleveland. Just as Clinton would adopt the Republican position on trade protectionism a century later, Cleveland adopted the Republican position on the major financial question of his era, the dispute over whether to add silver to gold in a new, bimetallic monetary policy. Cleveland favored gold, while the nascent farmer-populist wing of the party wanted "bimetalism." At the party's 1896 nominating convention, Cleveland paid for his choice. Democrats rejected the incumbent Cleveland as their presidential candidate in favor of populist William Jennings Bryan, who swung the crowd his way with his famous "Cross of Gold" speech.

The short view of history is that Cleveland helped Democrats temporarily postpone the Republican realignment that began with William McKinley's election that autumn and, had they followed his lead, may have prevented it. William Jennings Bryan, after all, was the Democratic nominee for president in three elections (1896, 1900 and 1908) and lost by wider margins each time. But the longer view invalidates the tack advocated by the Bourbon Democrats, who ignored the underlying currents that, as early as the 1890s, brought "Coxey's Army" on foot all the way from Ohio to Washington to protest unemployment and poverty. Two later New York governors, Al Smith and Franklin Roosevelt, understood what those rumblings meant, and their ideas ultimately led to the New Deal coalition and an enduring Democratic hegemony.

A century after Cleveland's interregnum, DLC founder Al From -- Bill Clinton's William Whitney -- is betting that Harold Ford embodies the Democrats' future. The trouble for From and Ford is that the centrists' future has already passed them by.