Barbara Ehrenreich turns away from pop sociology to explore the historical oppression of collective happiness in "Dancing in the Streets." 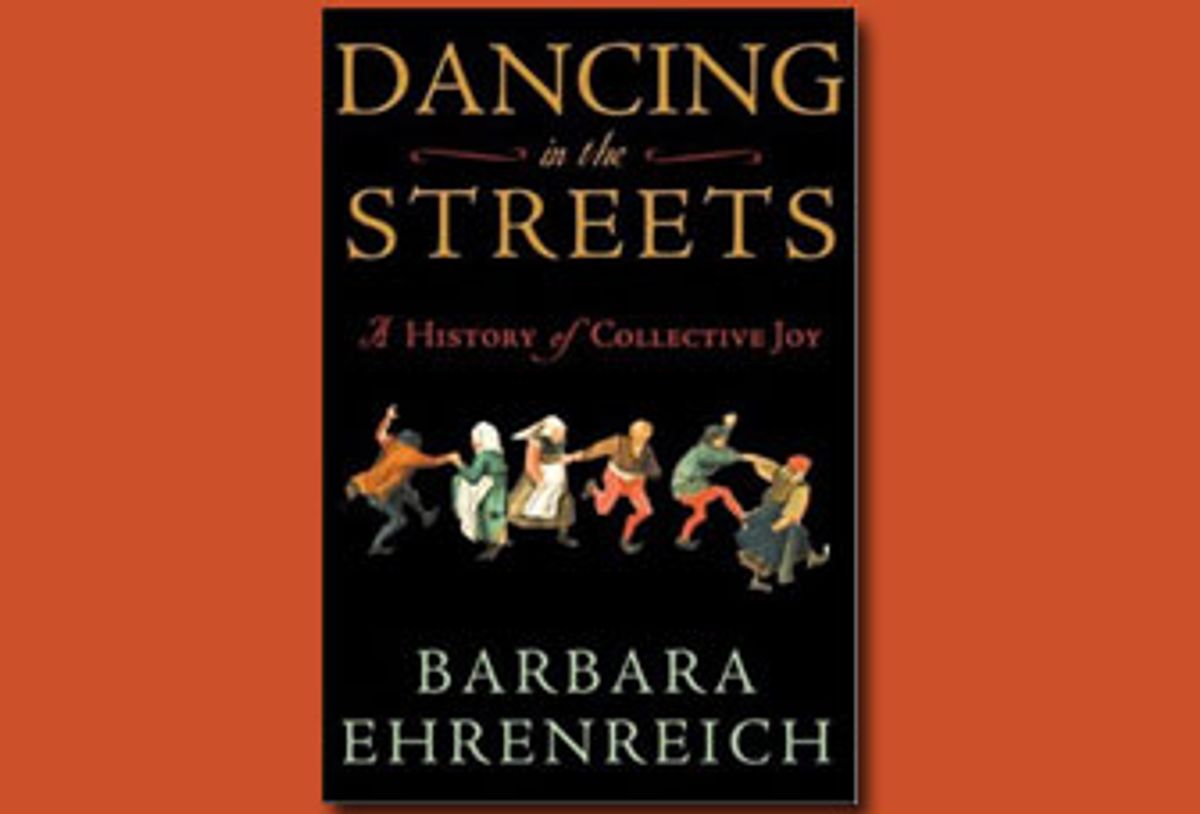 During my four years as a student at a Baptist college in North Carolina, I did not hear the authorities tell very many jokes lampooning their religion. In fact, I remember only one, told by a dean during a banquet speech. It went something like this:

It's not a bad joke, though I did not fully appreciate its socio-historical implications until I read Barbara Ehrenreich's lively and compelling history of collective joy, "Dancing in the Streets." In it, she reminds us that ecstatic dancing and Christianity were implicated a lot more closely -- and for much longer than the elders at the Southern Baptist Convention might care to admit. In fact, early Christianity's roots were deeply entangled with those of the Dionysian cults that also bedeviled the Roman authorities, so much so that Ehrenreich sees evidence of significant similarity between their two wine-providing deities, Jesus and Dionysus. "Both ... upheld what has been called a hedonic vision of community, based on egalitarianism and the joyous immediacy of human experience -- as against the agonic reality of the cruelly unequal and warlike societies they briefly favored with their presence."

With its emphasis on nocturnal and often secretive gatherings, speaking in tongues, and dance, "first-and second-century Christianity offered an experience in some ways similar to that provided by the Greek mystery cults and the "oriental" religions in Rome -- one of great emotional intensity, sometimes culminating in ecstatic states." It was not until the middle of the fourth century that the Church began to actively discourage euphoric dancing as part of worship, a crackdown that was still going on nearly a thousand years later. "The custom of dancing in churches was thoroughly entrenched in the late Middle Ages and apparently tolerated -- if not actually enjoyed -- even by many parish priests," Ehrenreich claims. "Priests danced; women danced; whole congregations joined in. Despite the efforts of the Church hierarchy, Christianity remained, to a certain extent, a danced religion" until the 13th century.

Ehrenreich highlights this mostly forgotten phenomenon to illustrate her book's intriguing central theme -- that ceremonies of collective joy and exaltation were at one time a profoundly important part of human life, and their disappearance has greatly diminished us. Her latest book is a departure from her recent populist immersion studies, "Nickel and Dimed" and "Bait and Switch," marking instead a return to the more scholarly stance of her brilliant 1998 analysis of mankind's attraction to war, "Blood Rites." According to the author, group dances and Dionysian festivals create what the French sociologist Emile Durkheim termed "collective effervescence: the ritually induced passion or ecstasy that cements social bonds and ... forms the ultimate basis of religion." Indeed, Ehrenreich wonders, along with many anthropologists, if coordinated dance might not have originated as a survival mechanism, with beleaguered bands of early humans joining together to stomp or bang sticks in unison to ward off larger predators. As one neuroscientist puts is, dance is "the biotechnology of group formation." This early impulse to dance became formalized in various Dionysian orgeia, "literally, rites performed in the forest at night, from which we derive the word orgy." The authorities, first the Roman state and then the Catholic Church, were not amused, and strove to root out cults that followed Dionysus under his many guises. (Ehrenreich's favorite is the Etruscan god Fufluns, who sounds as if he might have presided over the early version of "Seinfeld's" Festivus celebration.) The reason for this suppression was simple -- ceremonies of collective joy offered participants unmediated, blissful communion with their god, effectively cutting out the civic or ecclesiastical middle man.

After being booted out of the chapel in the Middle Ages, collective ecstasy found a new home with the establishment of carnival, the loose series of festivals and processions that involved maypole dances, costumes, feasting, sports and, most dangerously, the ritualized mockery of institutions such as the church and the monarchy. It wasn't long before the state and the church (in both its Catholic and, later, its Calvinist manifestations) began to clamp down on carnival, enacting a series of laws that greatly restricted the ability of laboring-class celebrants to revel. While the fear of diminished authority was still a central motivation for this crackdown, a variety of other reasons had cropped up, notably the problem of too many feast days in the calendar to allow for a productive workforce. "Without question," Ehrenreich asserts, "industrial capitalism ... played a central role in motivating the destruction of carnival and other festivities." But there was also the fact that the carnival system restricted the ability of the state to build disciplined armies. "Any discussion of the suppression of carnival in Europe would be incomplete without mentioning the disciplining of Europe's fighting men, who had to be forcibly restrained from the drinking and carousing that had once enlivened military service for so many reluctant conscripts."

One of the uses to which these post-festive soldiers were put was to colonize distant lands, where the war against collective ecstasy still raged. "Europeans generally found themselves in furious opposition to the communal pleasures and rituals of the people whose lives they intruded upon," Ehrenreich maintains. From Polynesia to the Horn of Africa to the Caribbean, ceremonies involving dancing and drumming were extirpated by scandalized conquerors. "European colonizers were often appalled both by the apparent laziness of the natives and by the energy they invested in purely 'superstitious' ritual activities," the author claims. Collective ecstasy was a pursuit for the primitive, the jungle-dweller, not the educated sons and daughters of the European bourgeoisie.

According to Ehrenreich, one byproduct of this war against ecstasy was the "epidemic of melancholy" that swept Europe in the 17th century, at just the time when Calvin succeeded in almost completely removing collective effervescence from public life. Although she admits that there is no way of being absolutely certain about the etiology of this plague, Ehrenreich has a good idea about the culprit's identity. "Could this apparent decline in the ability to experience pleasure be in any way connected with the decline of opportunities for pleasure, such as carnival and other traditional festivities?" Even if the repression of carnivals did not produce widespread melancholy, it certainly took away an obvious palliative, according to the author. "If the destruction of festivities did not actually cause depression, it may still be that, in abandoning their traditional festivities, people lost a potentially effective cure for it."

Many modern readers will wonder what the fuss is about. As Ehrenreich points out, our perceptions of festivities of collective joy are mediated not only by Christian revisionism and colonial prejudice, but also by the recent horrors of fascism, particularly Hitler's Nuremberg rallies, which at first blush had a grossly Dionysian aspect, what with all that torch-lit marching and worshipful chanting, leading up to the delirious arrival of the godhead. Ehrenreich quite brilliantly deconstructs this idea, however, showing that Nuremberg and its lesser replicas were in fact carefully stage-managed spectacles that bore little relation to Dionysian dances or medieval carnivals. "Where the carnival had been joyously irreverent, the nationalist rallies, and especially the fascist ones, were celebrations of state authority, designed to instill citizenly virtue or at least inspire awe."

Despite the long war on joy, and its corruption by fascists, collective effervescence endured, albeit in a bootleg manner. African slaves, for instance, were able to keep their dancing and drumming festivals alive by merging them with Christian ceremonies, thereby giving birth to Haitian Vodou, Brazilian Candomblé and Caribbean Santeria, as well as the "ring-shout" dance worship of African-Americans. Ehrenreich, a child of the '60s, sees the emergence of rock 'n' roll as a key means of sustaining collective effervescence. "The early rock audiences who stomped and jumped out of their seats to dance were announcing, whether they knew it or not, the rebirth of an ecstatic tradition that had been repressed and marginalized by Europeans and Euro-Americans for centuries." (My only complaint against Ehrenreich's argument here is that she fails to take note of post-rock musical forms such as trance and house, which perhaps conform more readily to her analysis than, say, the music of the Grateful Dead or the Rolling Stones. She also takes a swipe at the drug Ecstasy, though she does not seem to bear a similar animus toward wine or marijuana.) To Ehrenreich, people attending rock concerts, at least in the '50s and '60s, were not only practicing collective joy, but were also rebelling against the very idea of being part of a regimented Nuremberg-type audience. A similar phenomenon can be seen in contemporary sports stadiums, where costumed, drumming, wave-making fans are, as the author sees it, "'carnivalizing' sports events, coming in costume, engaging in collective rhythmic activities that [go] well beyond chants, adding their own music, dance, and feasting to the game."

Ehrenreich is aware that some readers will be tempted to see her book as little more than nostalgia for a primitive innocence that will never return. She responds that the point of her essay is not to urge us all to paint ourselves red and dance around the maypole, or attend the Burning Man festival, but rather to remind us that the "capacity for collective joy is encoded into us almost as deeply as the capacity for the erotic love of one human for another. We can live without it, as most of us do, but only at the risk of succumbing to the solitary nightmare of depression." On the question of what new forms collective joy will take in our Web-infected, cellphoned, iPodded times, she remains mute. I suspect that flash crowds might point a way forward, with people using seemingly divisive technology as a way of re-creating what Ehrenreich calls "the largely ignored and perhaps incommunicable thrill of the group deliberately united in joy and exaltation." For now, however, the author's inability to envision future forms of collective joy makes "Dancing in the Streets" a lively, intelligent elegy for lost happiness, rather than a prescription for a way back into the woods.