The Academy's nominations this year are more memorable for what isn't nominated than what is. 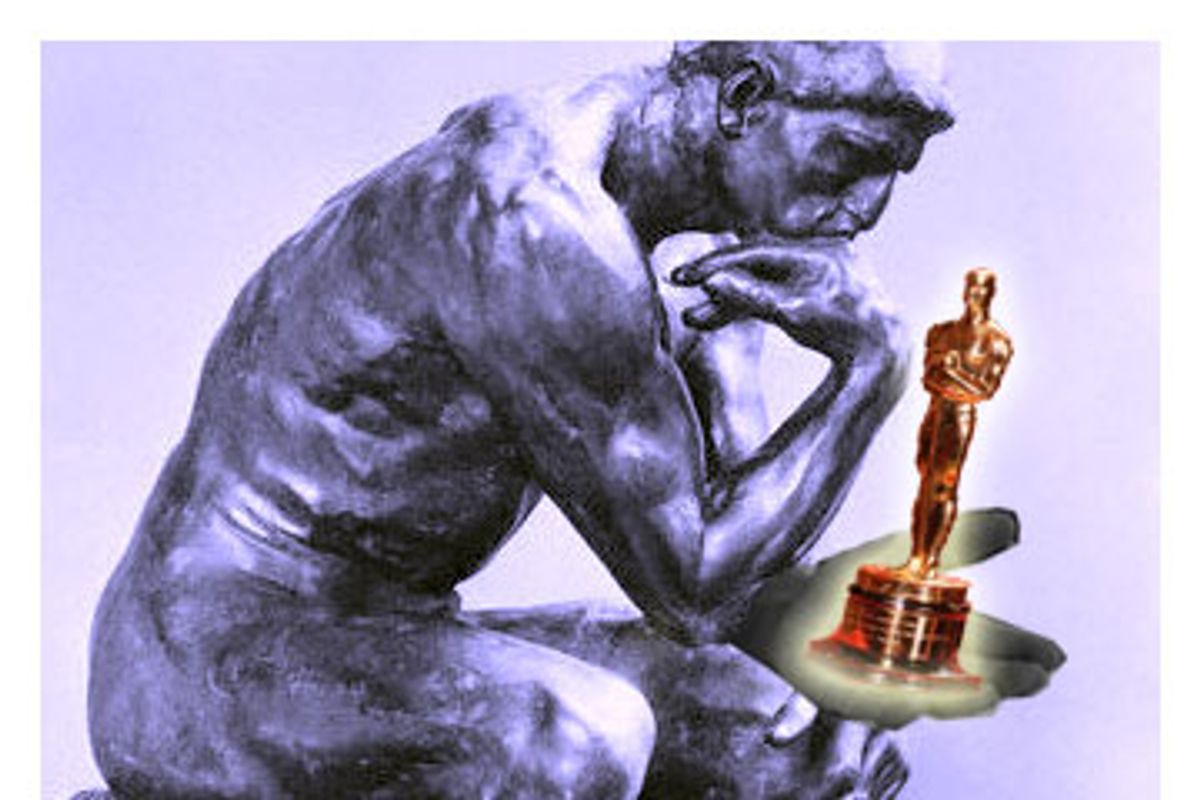 It's that time of year again: The Academy of Motion Picture Arts and Sciences has unleashed its nomination choices on the world, prompting everyone with even a passing interest in contemporary movies to ask the question, Just who are these people, anyway? Or, more specifically, what do their nominations say about how they want the world to perceive them?

A quick glance at this year's best picture and best director nominations suggest that this year, the Academy wants to be viewed as serious, thoughtful, not too frivolous -- the equivalent of a knee-length hemline, a pair of Calvin Klein wire-rimmed spectacles, a fun date, but one who actually read a book once. If last year's nominations suggested, as my colleague Andrew O'Hehir astutely pointed out, that Hollywood was ready to wear its liberal guilt on its sleeve, this year's range of choices points to a Hollywood that wants us to know it still believes in old-fashioned storytelling and craftsmanship ("The Departed," "The Queen"); one that recognizes, with a twinge of righteous regret, the ways culture and class still divide us even in a seemingly shrinking world ("Babel"); one that acknowledges we must have sympathy for our enemies ("Letters From Iwo Jima"); and one that staunchly supports even "quirky" -- please note the irony-laden quotation marks -- indie pictures like "Little Miss Sunshine," movies that challenge us to see American families as crazy enterprises in which, gosh darn it, deep down, everyone really does care for one another.

But, as always, the movies the Academy doesn't nominate hover around its choices like unspoken parentheticals. And in the final analysis, the movies the group doesn't recognize might say more about it than its actual choices do. Bill Condon's "Dreamgirls," the kind of crowd-pleaser that usually dazzles the Academy, received neither a best picture nor a best director nomination (although it received eight nominations overall, including three slots in the best original song category). I'd like to think that members of the Academy recognized that the picture is really a headache-inducing mess, cluttered with lousy songs, but I know that's wishful thinking. I believe that "Dreamgirls" simply doesn't suit the Academy's solemn, beard-stroking mood this year: Can't have any crazy plaids clashing with those modest stripes.

It's not surprising that the group would honor Clint Eastwood's "Letters From Iwo Jima" over "Flags of Our Fathers," considering "Letters" met with so much unvarnished adulation from critics, while "Flags" opened quietly, to respectful but not glowing reviews. "Flags" -- for my money, the far better movie -- was practically forgotten by the time "Letters" (which was originally slated for an early 2007 opening) was rushed into theaters; now, it languishes in Rodney Dangerfield territory. It's possible that "Flags" suffers in comparison because it's viewed as just another American combat picture -- business as usual in the war-movie canon. But "Letters" -- which is in Japanese, with English subtitles -- has all the cachet of a foreign film, even though it was made by an all-American director. Of the two pictures, it's perceived as the classier project, the one more likely to be preferred by sophisticated, discriminating moviegoers. And if nothing else, the Academy certainly wants to be seen as discriminating.

The most telling of the Academy's choices may be its nomination of "Little Miss Sunshine" for best picture, but not for best director -- and its nomination of Paul Greengrass' "United 93" for best director, but not for best picture. In those two categories, the other nominations ("The Queen," "The Departed," "Babel" and "Letters From Iwo Jima") line up in a neat one-to-one formation. But the Academy seems to want to send two messages here: It wants to find a way to honor the serious, ambitious, downbeat indie "United 93." But it also wants people to feel good about the movie industry overall -- and a docudrama about one angle of 9/11 isn't going to fit that bill.

But even beyond that, there's something annoyingly self-congratulatory about the Academy's nomination of "Little Miss Sunshine," as if its members were enormously pleased with themselves for daring to recognize an indie picture. Of course, four of last year's five best picture nominees were indie pictures (at least in the broad sense, given that the lines become more and more blurred each year). But this year, "Little Miss Sunshine" is the sole indie picture among the best picture nominations, which gives the movie more weight than it deserves -- or can possibly carry. Somehow, despite the fact that it was practically hurled like a cannonball out of last year's Sundance, and then marketed more aggressively than most action pictures are, "Sunshine" has achieved Little Indie That Could status. Audiences were supposed to feel good about having stumbled onto this allegedly charming weensy treasure, even though avoiding it would have taken a hell of a lot more work. And now the Academy members follow suit, proving, perhaps, that they're even more susceptible to marketing pitches than we are. Maybe that's comforting, a little like those old Hair Club for Men ads in which the smiling, well-coiffed Sy Sperling would announce, "I'm not just the Hair Club president -- I'm also a customer!" Or maybe it just means that the members of the Academy don't get out of the house enough.