In this flawed but winning romantic comedy, Jennifer Garner captivates us -- and doesn't let us go. 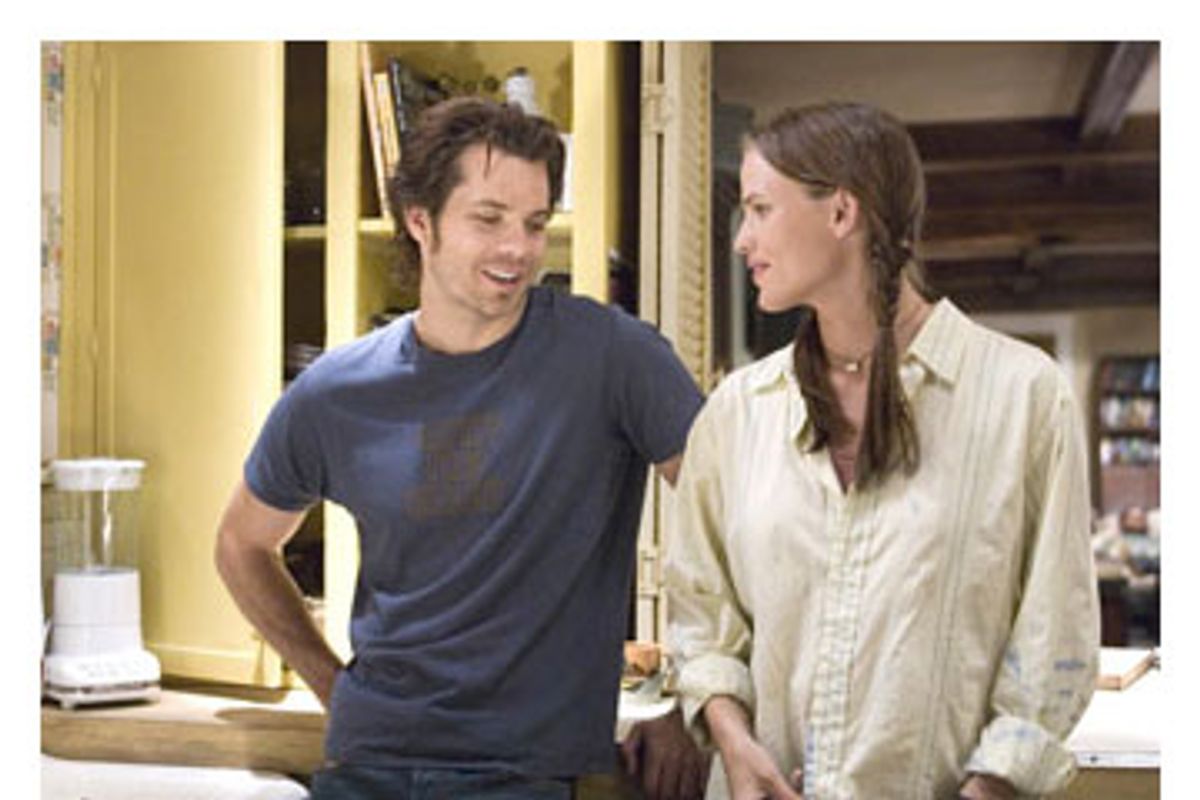 It may seem as if there's always a new romantic comedy coming down the pike. But if you make even a cursory count of romantic comedies released within the past two years, you'll find them greatly outnumbered by action movies, adaptations of novels, and comedies aimed at teens and college kids. Among the few romantic comedies we do get, pictures like "You, Me and Dupree" or "Failure to Launch," both released last year, feel rushed and disposable, as if they were made by people who don't have much feeling for the genre -- or, perhaps more specifically, have stopped believing that an audience for romantic comedies exists. Even tonier projects like "The Holiday" feel minted, not made, as if a genre picture were simply something that could be popped off a conveyor belt.

Occasionally, though -- and somehow, it always seems to happen in January, when the movie year is still in the frozen-ground stage -- a hopeful crocus pops through the surface, and we get a romantic comedy that feels more organic and less manufactured. Last year, it was Sanaa Hamri's lively, unusual interracial-romance comedy "Something New." This year, we have Susannah Grant's "Catch and Release," a picture that's far from perfect -- and yet one whose flaws at least suggest it was made by a human being and not a robot.

Gray Wheeler (Jennifer Garner) is a bride-to-be whose fiancé dies just days before the nuptials: Wedding plans hastily turn into funeral arrangements, and the same guests who'd hoped to gather for a happy occasion instead turn out for a somber one. A clueless florist shows up with bunches of bridal flowers; a considerate guest guides him away quietly, before the grieving un-bride can see.

Gray -- who immediately strikes us as an exceedingly sensible young woman, despite that hippie-parent name -- is consoled by her fiancé's friends, including depressive buffoon Sam (Kevin Smith, in a relaxed, appealing performance), who's employed by the Celestial Seasonings tea company to dig up the quotes found on its boxes, and outdoorsy fisherman Dennis (Sam Jaeger), who's blissfully at home in the natural wonderland surrounding Boulder, Colo., where all of these characters live. A third friend, Fritz (Timothy Olyphant), steps into this small circle from the outside: He's the fiancé's childhood pal, a Los Angeles guy who comes off as both lackadaisical and a wheeler-dealer. Nobody seems to like or trust him much, least of all Gray: She disapproves even more when she catches him grabbing a post-funeral quickie with the cute young caterer.

It turns out, though, that Fritz knows some things about Gray's fiancé that the other guys don't. And he's going to stick around Boulder to prevent his friend's secrets from unfolding in a way that would be detrimental to the people he cared about. He moves into the house shared by Dennis and Sam -- Gray, now unable to afford to live by herself, temporarily moves in, too -- and proceeds to cause problems even as he attempts to prevent them.

Guided by the laws of romantic comedy, which, in their purest form, are as powerful as those that keep the stars in the sky, Gray and Fritz fall in love. But their story takes shape in such a natural and unforced fashion that even when it's slightly far-fetched, we have no trouble believing it.

Grant, who also wrote the script for "Catch and Release," has been working as a screenwriter for years, and most of the movies she's written have shown a sharp, smart sensibility. Her credits include the recent, and very charming, adaptation of E.B. White's "Charlotte's Web," as well as "Erin Brockovich" and the lush Cinderella update "Ever After." (She also wrote the dismal "In Her Shoes," but everyone is allowed a clunker or two.) "Catch and Release" has some problems: Even though we see Gray at her office, we never learn what she does for a living. (While few people want to be wholly defined by their jobs, knowing how a character makes her livelihood never hurts.) Early on, the story raises some questions about the fiancé's financial status that make very little sense once we know more about his family background. And a character played by Juliette Lewis is badly conceived and shaped -- we need to like her more, or at least know her a little better, before we can feel good about her role in the movie's ending. Then again, maybe the character just needs to be played by someone other than Juliette Lewis, whose voice has all the richness of a tin can hitting the side of a steel shed.

But "Catch and Release" is one of those movies where the small pleasures stack up high enough to dwarf the disappointments. The picture may have a degree of mainstream slickness, but it's also quiet and unassaultive, and Grant has a good sense of how a story can unfold in details as well as through dialogue. In an early scene, Dennis, Sam and Gray huddle in the kitchen, trying to give some shape to their grief by talking about it, as the Lemonheads' "My Drug Buddy," a seductive pop song about what it takes just to get by, plays in the background. Before Gray leaves the apartment she can no longer afford, she spies a note taped to the door, clearly from the landlord: "Gray: Rent? Love, Robin" followed by a passive-aggressive smiley face made of two exclamation marks -- the kind of detail that shows how real life can't be stopped, or even slowed down, by sorrow. And as Gray and Fritz stroll through the streets of Boulder, surrounded by happy bicyclists wearing spandex outfits that make their sinewy limbs look as if they'd been molded out of fiberglass, Fritz can't resist making an uncharitable wisecrack, referring to the place as "Patagonia Disneyland." (Part of the joke is that the fellow who's knocking the phoniness of Boulder is a film-industry guy who makes his home in L.A.)

A romantic comedy is only as strong as its leads, and "Catch and Release" has two good ones. Olyphant, who played Sheriff Seth Bullock on "Deadwood," is effective here precisely because he seems a little sharp and dangerous. He's not your typical cuddly romantic lead, but he also gives you a sense of how Fritz's love 'em and leave 'em facade is all part of how he guards his emotions. He and Garner click effortlessly, yet of the two, it's Garner who's more fascinating to watch, and more moving.

As much as I loved Garner on "Alias," I think only the big screen truly does justice to her otherworldly, vaguely androgynous face: Blessed with both dimples and marvelous cheekbones, as well as with grave-looking, deep-set eyes, she's all movie-star smolder one minute, all girl-next-door vitality the next. As Gray, she occasionally dances close to being unbearably cute. But something in Garner won't let her go over that sugary edge. Perhaps it has something to do with the fact that she's such a remarkable physical performer. There's a daddy-long-legs quality, a kind of gawky grace, about her -- to watch her move is to witness a balletic unfolding of limbs. Even her hands, fluttering nervously or curling into defensive fists, sometimes clue us in to her character's feelings before her face does. Garner puts all her heart, soul and muscle into "Catch and Release," and that's part of the movie's craftsmanship.