Protesting the war -- not just for giant puppets anymore!

Because of the surge, Saturday's anti-Iraq war rally in Washington included some new, mainstream faces. 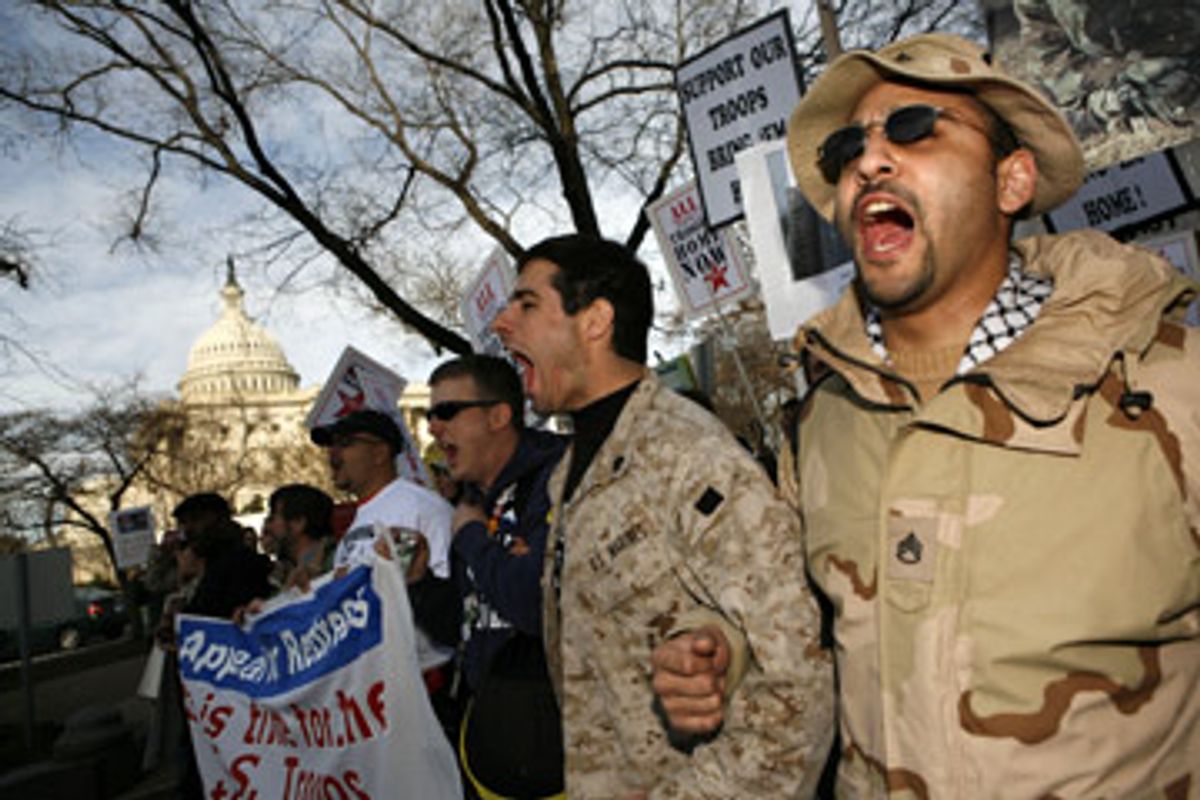 Before Saturday's antiwar rally in Washington, some of the snarkier commentators on the Internet offered world-weary predictions of what the gathering on the Mall would bring. "You'll for sure want to go march around with giant puppets, Palestinian activists [and] Free Mumia people," smirked D.C.-based blog Wonkette, while another local site, D.C.ist made jokes about Jane Fonda and Tim Robbins.

Sure enough, among the 100,000 protesters gathered on the Mall Saturday afternoon, there really was a giant puppet of a devil and at least one "Free Mumia!" sign, and Jane Fonda and Tim Robbins put in appearances. But what was actually striking about the protest was how different it was from other, earlier Iraq war protests.

It would be hard to say if the rally was larger or smaller. The Los Angeles Times reported a crowd of 100,000, while Hany Khalil, a media liaison for United for Peace & Justice, the umbrella group that organized the rally, told Salon on Saturday that UFPJ estimated some half a million. The U.S. Park Police, which once provided estimates of crowd size for Mall rallies, no longer does so.

Regardless of size, the protest felt different. The demographics of the crowd had changed. As opposition to the war in Iraq mounts, sparked by the president's decision to send 21,500 more troops, protesting against it has become mainstream. There were plenty of professional protesters in evidence Saturday, the kind for whom protests are a lifestyle choice, but there were also more yuppies, more families with small children, more older people and even a fair number of stylishly dressed young girls in North Face jackets and Ralph Lauren sunglasses. Just as important, the confused, off-topic rhetoric of so many past protests was noticeably muted.

The organizers, however, still seemed to have a little trouble focusing. The list of speakers they handed out to the press was more than 40 people long and included, in addition to four House Democrats and a number of actors -- Danny Glover, Susan Sarandon and, yes, Jane Fonda and Tim Robbins, a number of off-topic speakers, including two from the U.S. Campaign to End the Israeli Occupation, Kim Gandy, president of the National Organization for Women, Umuna Ghismay of the People's Hurricane Relief Fund and 12-year-old Moriah Arnold. Because of the long roster of speakers, the march started 45 minutes late.

And there were still some of the kind of colorful, not ready for Middle America displays that these protests are known for: a sign reading, "Will give blow job for impeachment"; a man in a gorilla suit carrying a sign that read, "Another gorilla against the escalation"; the occasional whiff of marijuana smoke; the odd, pointless dash of 30 or so black-clad anarchists into the crowd, waving black flags and screaming. And, of course, plenty of drum circles.

Jessica Apuzzo and Donna Kohut, grad students in women's history at New York's Sarah Lawrence College, held a banner that read, "Bombing for peace is like fucking for virginity." Both said they were in Washington because they were " pissed off" and "like protesting." They had chosen the slogan, they said, because they wanted something that would stand out. And they had gotten a positive response. "Everyone says we're the best," Kohut laughed.

There was a distinct radical element in the crowd. Besides the anarchists, there were members of the Revolutionary Communist Party, which lead a feeble chant of "Fuck the U.S. and all its might, revolutionary war is what we'll fight," and there were three lonely signs produced by the Spartacist League, one of which read, "Defend China, North Korea and Vietnam against imperialism and capitalist counterrevolution! For workers [sic] political revolution!"

But these were largely far from the stage and at the fringes of the throng. In the middle of the crowd was Scottie Crowe, a well-dressed 24-year-old from North Carolina. Crowe, who moved to D.C. two years ago, said she had come to her first protest despite not knowing exactly how she felt about the war. "I just came out today to help support, but honestly, I don't have a solid opinion either way," she said. " I wanted to come out here and see what everybody thought, and being here you just think we have to bring the troops home now. At the same time, you've got to think about how hard that is."

Sam Fletcher, of Harrisonburg, Va., said this was his first antiwar protest. During Vietnam, he had burned his draft card "in the privacy of his living room."

" I was chicken shit," he said, smiling.

His wife, Victoria Fletcher, was a high school senior at the end of that war, and participated in protests. But this was her first protest of the war in Iraq; she said it was the president's escalation that prompted her to travel the 130 miles north to Washington. "I've been against this since Day One," she said, "but the surge was the [reason]." The surge wasn't the tipping point for her husband. Sam Fletcher said he had simply decided to "put my money where my mouth is," especially given that the couple has two college-age sons.

The Fletchers were both impressed by the march. "It was our first protest," said Sam Fletcher, "but not our last." His wife added that next time they'd be bringing their sons. The couple was unconcerned about sharing the Mall with others more radical than themselves. "We've all got to get along," Victoria Fletcher said. "Anytime you're wanting to stop the war, that's fine with me."

After the march, those members of the crowd who were not regular protest-goers still seemed energized by the experience. Julia Carroll and Carly Guarcello, freshmen at Georgetown and Hofstra, respectively, were attending their first protests.

" I think it's a wonderful thing to see people together like this," Guarcello said. "It's awesome for this many people to be out here."

Carroll agreed. "It was very moving for me to see that we are united," she said.

Asked about the more demonstrative marchers, the women laughed. "They're passionate," Guarcello said. "A very interesting plethora," Carroll added, saying, "You know, good for them for speaking out. I can't really say any more than that."