Buried in the Bush escalation plan is a who's-in-charge nightmare that violates U.S. military doctrine. Now even John McCain and Frederick Kagan are balking. 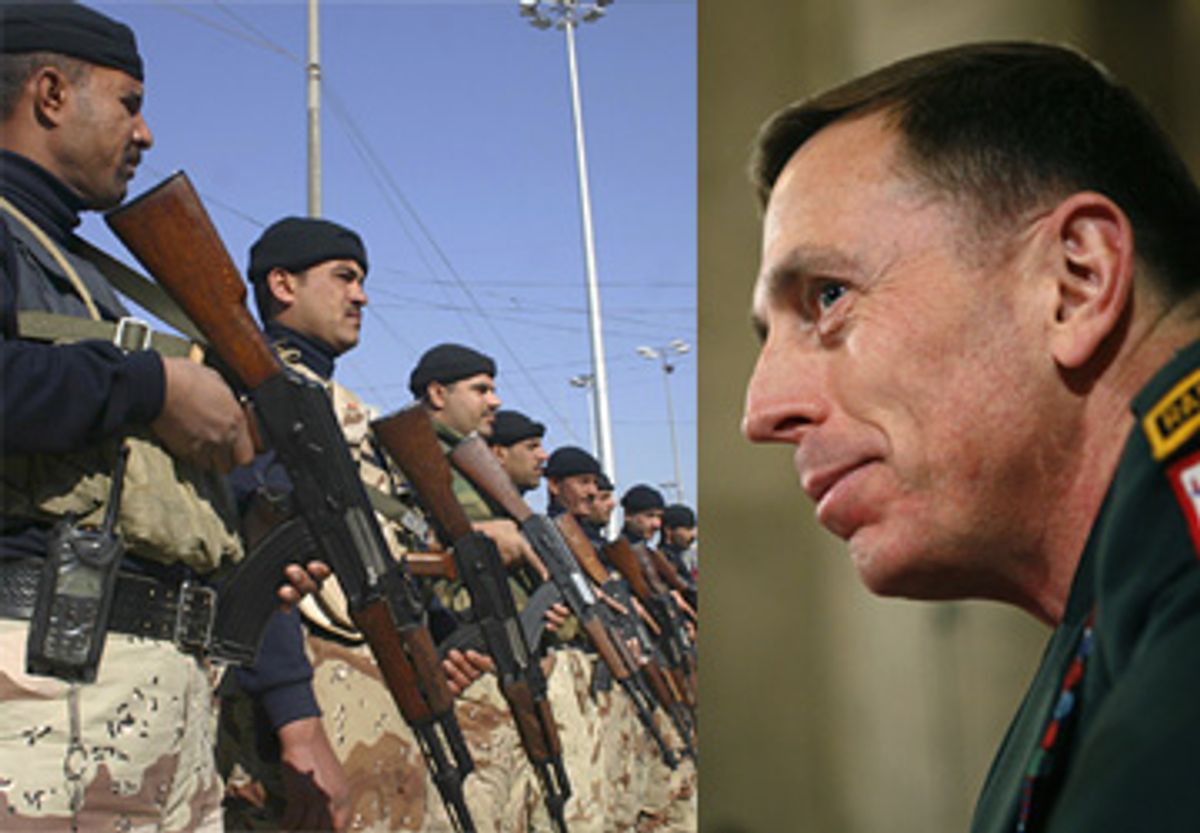 As the Senate nears an unprecedented debate on President Bush's escalation of the Iraq war, almost all the public criticism has been aimed at the inadequate size of the new forces being sent to Baghdad (21,500 troops) and the extreme difficulty of reversing the course of the civil war. But last week, little noticed by the press and public, the Bush plan began to be attacked on a surprising new front -- by Iraq hawks, like Sen. John McCain, concerned that the split command structure for the operation violates basic military doctrine.

The Baghdad surge plan, announced by the president on Jan. 10, calls for the new U.S. soldiers to be embedded with Iraqi forces, who will take the lead. But while the U.S. troops would report to American officers, their Iraqi counterparts, in an apparent sop to national sovereignty, would report to Iraqi officers. The potentially disastrous result: two separate and independent command structures within the same military operation.

"I know of no successful military operation where you have dual command," McCain told Lt. Gen. David Petraeus, the new commander of U.S. forces in Iraq, during a Senate Armed Services Committee hearing last Tuesday. Petraeus, heralded by the Bush White House as the man who would make the surge work, signaled his agreement, telling McCain, "Sir, I share your concern."

These concerns threaten to deprive Bush of the support of many of the outside military experts who originally championed a plan for escalating the war by surging troops into Baghdad. The American Enterprise Institute's Frederick Kagan expressed his fears in an interview Friday about putting the Iraqis in charge and establishing two separate chains of command. "This is a major issue," he said. "In any military operation, dual chains of command are a problem. I think the administration has made a mistake."

McCain and Kagan, along with Jack Keane, the former vice chief of staff of the Army, advanced their own 20,000-soldier, American-led surge plan early this month, releasing a document at AEI, a hawkish Washington think tank . But Keane too expressed his reservations about Bush's proposed command structure in testimony on Capitol Hill last week. "When a platoon or company of U.S. forces and a platoon or company of Iraqi forces ... are reporting to different chains of command, it makes no sense to you, it makes no sense to me," Keane told the Senate Armed Services Committee Thursday. "But that's exactly what we're going to do."

These days, Kagan, in particular, has been careful to differentiate the AEI plan from what Bush actually proposed. The AEI blueprint advocated that American and Iraqi forces should work together -- with the more competent Americans in the lead and in control. The units would operate "within a single command structure," Kagan's written plan for a surge states. "Unity of effort is essential for success in this kind of endeavor." Small wonder that Kagan said about Bush's ideas in an interview, "This is not our plan. The White House is not briefing our plan."

When Bush announced his new Iraq strategy in a televised prime-time address, it appeared that the president was following the surge doctrine set down by McCain, Kagan and Keane. But Bush added a twist as he proposed sending more than 20,000 new U.S. troops to Baghdad. The Iraqis would spearhead the fight, the president claimed, despite the woeful track record of Iraqi forces in battling the insurgency. American troops, the president said, would "work alongside Iraqi units and be embedded in their formations." Bush then said that the Iraqis would have their own military commander and two deputy commanders to oversee the 18 Iraqi Army and National Police brigades that purportedly would be going house-to-house in Baghdad.

For military experts, who have long questioned the Bush strategy in Iraq, the dual command structure is just the latest in a long chain of avoidable errors. "It just shows you how flawed the whole scheme is," said retired Lt. Gen. William Odom, who was once the Army's senior intelligence officer, in an interview. Odom lamented that Iraq has been "just a bad nightmare" from the start. He said this White House continues to make mistakes that are "so painfully clear that sometimes I think I might be crazy."

Soldiers fighting side by side yet reporting to different commands is ill-advised in all military situations. But it is particularly risky in counterinsurgency operations, which require a sensitivity to political considerations. "Any kind of military operation -- but especially counterinsurgency -- only succeeds when there is a high degree of unity of command," said Bruce Hoffman, a terrorism expert at Georgetown University, who advised the Iraq Study Group. "You want to have very clear, smooth and defined lines of control. If you have dual forms of command, you have, at the start, introduced an undesirable complication. You can only have one chef stirring the pot."

The confusion of military and political necessities probably created the dual-command structure of the Baghdad surge. Lawrence Korb, an assistant secretary of defense under Reagan and a senior fellow at the Center for American Progress, speculates that the White House caved to demands from Iraqi Prime Minister Nouri Kamal al-Maliki that the Iraqis maintain some control. Maliki, according to news reports, initially resisted allowing more U.S. troops into Baghdad, especially since the American mandate was to try to pacify both Sunni and Shia militants. "Maliki is trying to show that he is still in charge," Korb said, stressing like other experts that "you can't have more than one commander in the battle."

Kagan, a longtime Iraq war supporter, is skeptical of the ability of Iraqi forces to lead anything. "If the plan is we are going to embed in Iraqi forces and the plan is that the Iraqis are going to lead, then the plan is going to fail," he warned. Kagan is reduced to hoping that Petraeus will resist the dual-command structure: "We have gone pretty far down this road. I don't think it will be fatal if it is going to be adjusted." Yet even Iraq war supporters would be forced to concede that the administration has been painfully slow to make any adjustments in its military strategy during the nearly fours years of the war.