Pack your long knives and go!

The second season of "Top Chef" selects a winner, and cooks up an enemy rich and flavorful enough to savor for years to come. 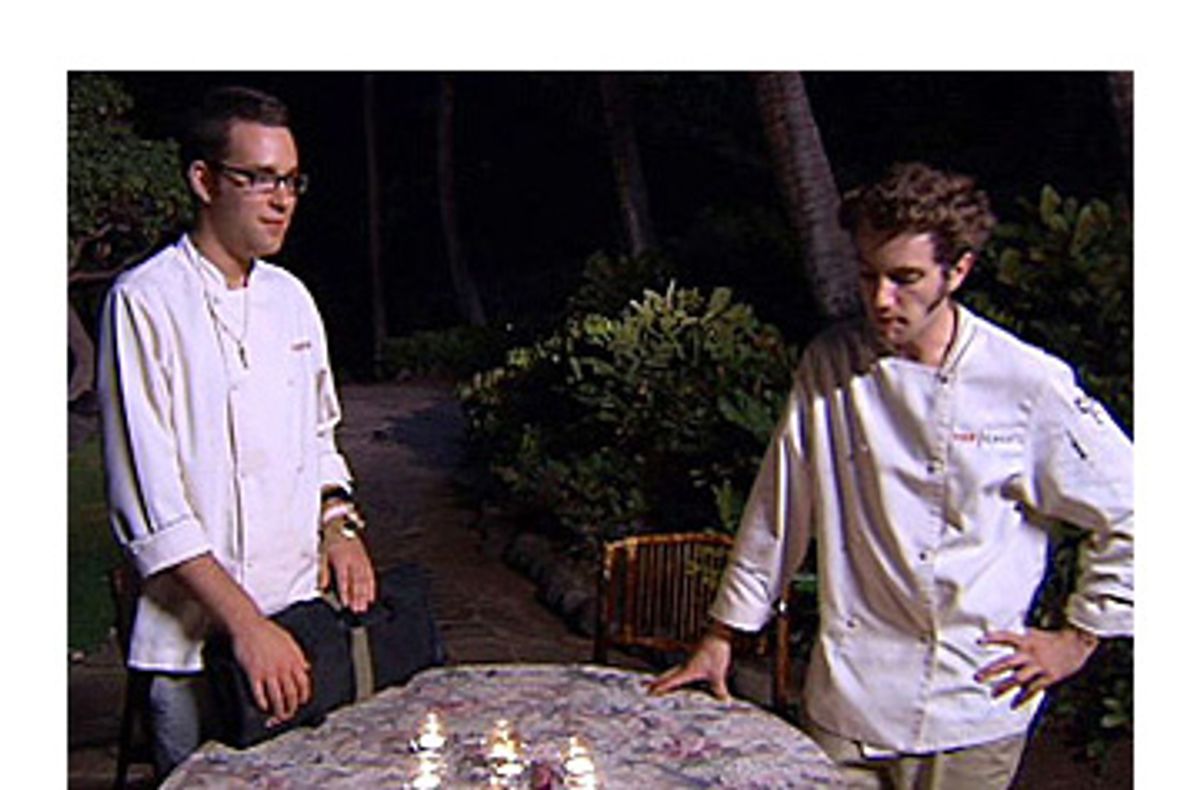 If you can't stand the Heat Miser, get out of the kitchen. That was the message from the "Top Chef" judges last week, seemingly determined to silence the angry accusations against wild-haired, smack-talking Marcel Vigneron, a 26-year-old molecular gastronomist whose disdain for predictable cooking raised the ire of every other cheftestant in the bunch. But on the Bravo Web site, thousands of viewers joined the enraged competitors in railing against the defiant little whippersnapper, with his nasty superior attitude and his love of the kind of culinary preciousness most of us don't have the curiosity (or the cash) to sample. Armed with a Tupperware tower of chemical tricks and a sociopathic streak a mile wide, Marcel had descended on Hawaii anxious to make Polynesian cuisine melt in his clutch. "He's too much!" his snippy peers lamented, but the judges decreed his inventive meal the best of the four finalists', hands down. "Marcel's food stole the show," judge Gail Simmons wrote on her "Top Chef" blog.

Going into Wednesday night's finale, then, it seemed that the title of Top Chef was within reach of Marcel's chemical-dusted fingertips -- at least it did to those of us who didn't have the finale spoiled for us by the premature publication of the winner's name on Food & Wine magazine's Web site. So how did an even younger and less experienced cook, Ilan Hall, 24, take home the big prize? All he seemed to have in his arsenal was a thorough knowledge of Spanish-style cooking and an ability to bring the best out of his sous-chefs, Elia (whom he pronounced the most talented of the bunch in an interview with Chow.com) and Betty (a clutzy goofball known for her colossal screw-ups and miscalculations in the "Top Chef" kitchens).

Marcel summed it all up with his typical savory mix of respect and humility: "I thought it was going to take more than f***ing saffron and paprika to beat me, but, apparently not." (To see more of Marcel's post-award comments, go here.)

Of course, Ilan had more skill in the kitchen than Marcel was willing to give him credit for. While he may have leaned heavily on some Spanish-flavored standards, Ilan managed not only to choose an appealing array of dishes for his final meal but to cook most of his dishes perfectly (with a major assist from Elia, of course). Marcel took a far riskier and more egocentric route, fiddling with miniature hardened-sugar bottles of vinaigrette for an otherwise bland salad instead of focusing on making every dish memorable and flavorful in the absence of such highbrow nouvelle magic. And Marcel somehow had trouble playing nicely with others to the very end, even when his victory depended on it. He chose executive chef Sam Talbot (who has looked like the most obvious choice for a winner all season) and amiable slacker Michael Midgey as his sous-chefs, then promptly alienated both of them by neglecting to fill them in on his grand vision the night of the big meal. As a result, Sam and Michael seemed ambivalent about helping Marcel win, and didn't prevent him from making a number of big mistakes, including leaving the main ingredient for one of the courses behind entirely.

In fact, even after the "Top Chef" finale was done taping, the cheftestants weren't through with Marcel. When asked about Marcel's annoying traits by New York magazine, Ilan and Sam were both more than happy to dish: Sam painted Marcel as a poseur who spoke like a surfer or a gangster, depending on who was listening, while Ilan offered up this anecdote:

"This didn't air, but he [Marcel] had to make this dish about lust and I told him that he's never lusted after a woman, all he does is go home and jerk off thinking about Joël Robuchon. And the only thing he could think of as a comeback was, 'I don't jerk off to Joël Robuchon.' That was it."

Of course, insulting the weakness and humorlessness of Marcel's comebacks may be the weakest and most humorless comeback of all, particularly given that Ilan's win was so narrow. In fact, the celebrity chefs who gathered to judge Ilan's and Marcel's meals seemed more impressed and inspired by Marcel's cooking than by Ilan's. And the show's main judges seemed to hedge their bets before announcing Ilan as the winner, making it very clear that they hadn't chosen the person who might be a better chef in a few years, but had selected the best chef today.

It was exactly the sort of practical, well-reasoned choice that those of us who love a spirited sociopath couldn't get behind. Even though Marcel's talents for precious plates and frothy foams at first seemed as laughable as his Heat Miser hairdo, even though he slowly but surely enraged each and every one of his peers, starting with the oldest chefs in the group, Betty and Frank, and moving on to his last remaining ally, Elia (who not only abandoned him but accused him of cheating in last week's episode), even though he angered Cliff enough to inspire him to grind his smug face into the carpet in the guise of a prank (a move that led to Cliff's dismissal from the competition), Marcel had the kind of inspired inventiveness and courage of conviction that a young chef needs to succeed.

And Ilan? He may possess a very practical approach to making the tastiest food he can (and hey, no one's knocking taste over frilly foodie flourishes), but does he have the kind of personality that inspires a team to rally around him? Does he have the fire and drive and passion to succeed in the brutal restaurant business? Hell, does Ilan even want to start his own restaurant? Isn't it easier to see him blowing those hundred-thousand U.S. dollars on a decadent food-, wine- and babe-sampling tour of Europe?

Then again, maybe it's time to ask WWABD, i.e., What would Anthony Bourdain do? Surely the confident author of "Kitchen Confidential" would've gone for some high-priced thrills and spills before committing himself to the huge challenge of starting a restaurant. On the other hand, Marcel has more of Bourdain's arrogance and nastiness and imperviousness to criticism, which may be exactly what it takes to survive on the brutal culinary landscape. Judge Tom Colicchio seemed to agree on his "Top Chef" blog last week, where he dismissed complaints about Marcel, asserting that "jokes, insults, and tough banter are part of every kitchen I've ever been in, and most people just let it go."

In the end, Ilan left Hawaii with the title of Top Chef, the fancy kitchen (What if he's renting?) and the $100,000 prize, but Marcel definitely won the title of Public Enemy No. 1, a title that, if fellow losing winners Boston Rob ("Survivor"), Puck ("The Real World") and Omarosa ("The Apprentice") are any indication, may be even more bankable than an actual win. Maybe bringing the cheftestants' tempers from a slow simmer to a full boil was Marcel's most inspired move of all.