The oddity of the Edwards complainers enlarges.

In order to finalize a few remaining design and functionality issues, this blog's move to Salon, originally scheduled for today, will instead take place this Monday, February 12.

UPDATE: In the meantime, Steve Benen provides some suggestions for stories for intrepid reporters who are interested in exploring the connection between political figures and hate-spewing pundits.

And in one paragraph, TBogg illustrates the true and obvious absurdity at the core of the "Edwards controversy":


Her writing is full of so many half truths, manufactured criticisms, dead-wrong assumptions, and a child like ignorance of the emotional universe inhabited by normal men and women that trying to decipher her scribblings b

...and then he invites his readers to go see the ever-sensible Michelle Malkin and Dan Riehl.

I could have stayed up all night and not come up with anything near that funny...

It would be as if The New York Times published a story about how the Edwards campaign found itself "in hot water" over offensive comments -- all based on complaints from Bill Donohue -- or if a political movement whose leading pundit was Rush Limbaugh was able to spark controversy by pretending to be upset by vulgar and offensive remarks from bloggers.

UPDATE II: An earnest, pious Jonah Goldberg, today, on how his political voice "as a writer" has "grown up":


You know, Jim [Geraghty] does make a good case [that this controversy will make online political debates more civil] and I hope he's right. I think about this a lot. I get a lot of grief from longtime readers about how I've "matured" or "grown up." And the truth is I have. Though I still think there's a lot of room left for humor (and once the book's done and put to bed, I'll bring back some pull-my-finger G-Filing), I'm basically burnt out on the smash-mouth stuff. When I criticize younger lefty bloggers for their excesses, I get a lot of "Hello Mr. Kettle, pot's calling on line one" grief. That's all fair to a point. But the basic fact is I don't do that stuff very much any more because it's cliched and boring to me . . .

Simply as a writer, when I see the nasty stuff now, on both the left and the right, my first reaction is to think how easy b 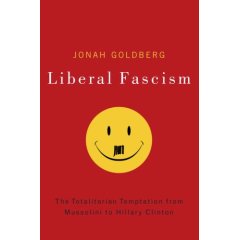 From the publisher's description of Jonah's book (the subtitle is The Totalitarian Temptation from Mussolini to Hillary Clinton):


LIBERAL FASCISM offers a startling new perspective on the theories and practices that define fascist politics. Replacing conveniently manufactured myths with surprising and enlightening research, Jonah Goldberg shows that the original fascists were really on the Left and that liberals, from Woodrow Wilson to FDR to Hillary Clinton, have advocated policies and principles remarkably similar to those of Hitlerb

The tiniest amount of shame and self-awareness would prevent a lecture like that. But that is what this whole "Edwards controversy" is -- protests over incivility from a political movement that spent several years talking about the spots on Bill Clinton's penis and which, as its principal debating weapon, routinely labels their political opponents traitors, lunatics, cockroaches, and Nazis -- or "the C word." That the press falls for it without pointing out the practices of those who are complaining is, quite candidly, just maddening.

UPDATE III: More of Jonah's civil, substantive, adversary-respecting form of argumentation is here. As you read that, keep in mind that this is the same person who wrote today about how much he hopes Marcotte and McEwan are fired because they drag down the elevated political discourse in our "Republic."

UPDATE IV: Leon Wolf of the Bush-loving blog RedState has been hired as the "e-campaign coordiantor" by the Sam Brownback campaign. Please forward by email, or leave in comments, any worthwhile material from Leon's past writings.

UPDATE V: A small but amusing start: From Leon Wolf, upon Brownback's announcement two short months ago (emphasis added): "I'm an unabashed Brownback supporter - I just donated to his PAC, but when (not if) he loses, I'll get on board with the winner, unless the winner is Rudy. Romney and McCain are not my first choices, but they're 'good enough,' I suppose" (h/t Crust). As Crust notes: "Doing a Google site search of redstate.com for "Leon H Wolf" gets 42,500 hits, so there's a lot of source material out there. His list of stories runs to 39 pages, but the juiciest stuff is likely in his comments."