Fearful of Iran's rising influence, will the Saudis start backing Sunni insurgents in Iraq -- even if the insurgents are rabidly anti-American? 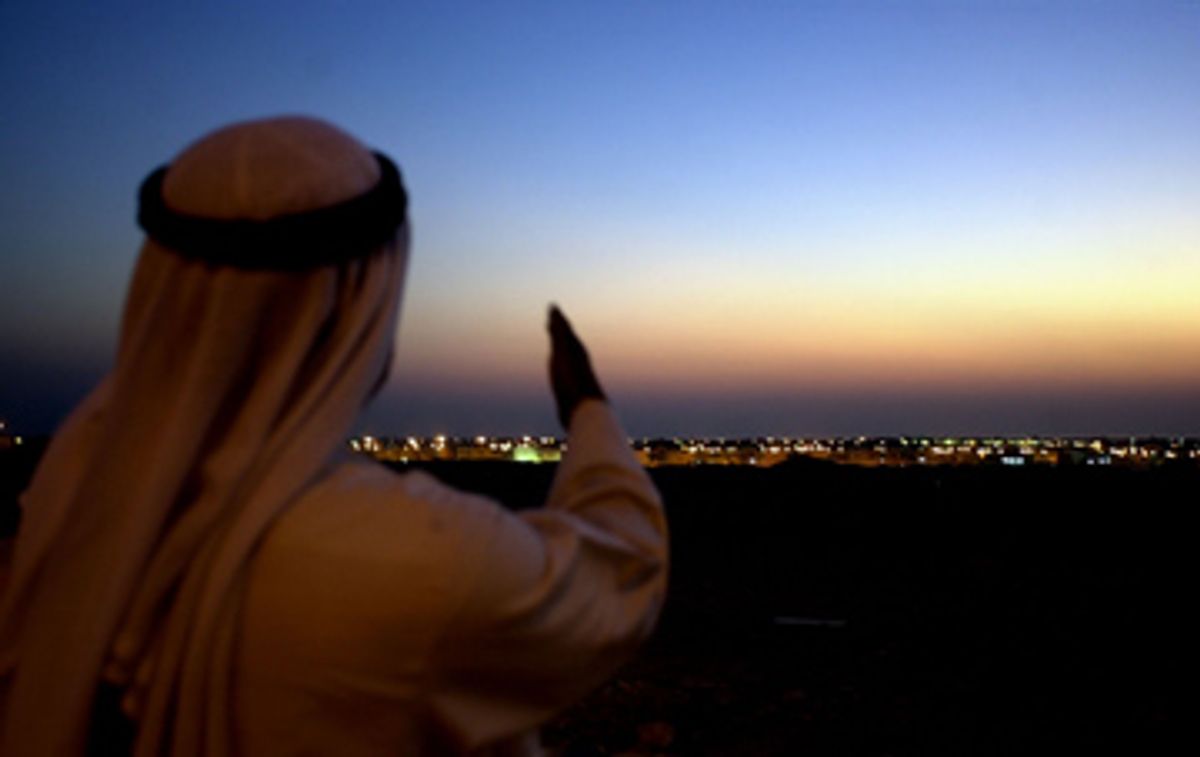 Saudi Arabia is watching with fear as the United States debates whether to stay in Iraq or leave. For while Washington may walk away from Iraq if President Bush's so-called surge plan fails, Saudi Arabia, which shares a more than 500-mile border with Iraq, cannot.

A predominantly Sunni Muslim nation that prides itself on an ultra-puritanical Wahhabi interpretation of Islam, Saudi Arabia has growing reason to be alarmed about the rising influence of Iran's hard-line Shiite regime in war-torn Iraq. As sectarian violence continues to deepen there -- and with the balance of power across the Middle East possibly at stake -- there is a growing danger that the Saudi leadership will try to protect its interests by supporting Sunni radicals in their fight against Iranian-backed Shiites, even though these same fighters are also rabidly anti-American. That could have ominous consequences for the long-standing, though always complicated, alliance between Riyadh and Washington.

Publicly, Saudis talk of the Iranian threat, both because they see it as growing and because they know that they will find sympathetic ears in Washington, especially now that the Bush administration is blaming Tehran for the deepening chaos in Iraq. Nawaf Obaid, a longtime advisor to the Saudi government, issued a broadside editorial in the Washington Post in November, warning that a U.S. withdrawal from Iraq would lead to "massive Saudi intervention to stop Iranian-backed Shiite militias from butchering Iraqi Sunnis." Although the tenuous state of the Saudi military makes a decisive military intervention almost unthinkable, Riyadh could provide military aid, and certainly can provide considerable funding, to an array of Iraqi groups.

From Riyadh's perspective, a stable and strong Iraq was a threat to the kingdom's security but at least had long balanced Tehran's influence -- a balance that ended after the United States toppled Saddam from power. Saudis have looked on with dismay as groups linked to Tehran gained power through the electoral system the United States established. Today, as the United States considers its options in the face of a bloody insurgency and growing sectarian strife, the Saudis see Iran's clerical leaders as vultures circling around the corpse of Saddam Hussein's Sunni-dominated Iraq.

Compounding the Saudis' fears about the region is the threat of unrest at home. As sectarian war increasingly dominates Iraq, religious tensions inside the kingdom are growing. Saudi Sunnis, many of whom see the Shiites as apostates, hear horror stories of atrocities committed by Shiite militias in Iraq and are agitating for Saudi intervention to protect Iraqi Sunnis. Saudi Arabia's long-suffering minority Shiite population, in turn, sees the carnage that Sunni suicide bombers are wreaking in Iraq against Shiites, and fears that hard-won reforms in its favor over the last 15 years may be reversed.

As Obaid's shrill warning suggests, the Saudis have many reasons to fear Iran. The opposing countries' struggle for dominance in the region goes back decades and draws on a deep well of sectarian hatred. Even before the mullahs seized power in Tehran in 1979, Riyadh and Tehran competed for geopolitical influence in the Persian (or, as the Saudis would say, the "Arabian") Gulf. With the ascent of Ayatollah Khomeini's clerical regime, however, the competition became far nastier. Both countries portrayed themselves as defenders of the faith and based their political legitimacy on their religious bona fides. The difference was more than just Sunni vs. Shiite, or Arab vs. Persian: Iran purported to represent revolutionary Islam. Like many leftist movements, the new regime proclaimed it would aid the "dispossessed" against wealthy and supposedly exploitative Western powers. Saudi Arabia, meanwhile, was a status quo state that had a cozy relationship with Washington and other Western powers. Khomeini regularly ridiculed the Saudi regime, and other Iranian leaders called for its downfall. Its leaders were corrupt and profligate. Khomeini leveled the ultimate insult: Saudi Islam was "American Islam."

The result was a cold war within Islam. Both countries funded charities and religious schools that promulgated their version of the religion. Iran also established ties to a range of extremist groups in the Persian Gulf, which attempted a coup in neighboring Bahrain in 1981, committed terrorist acts against Kuwait, and stirred up unrest among Saudi Shiites, who represent perhaps a fifth of the total population in the kingdom and are concentrated in the oil-rich Eastern Province. Iran even demonstrated its contempt for the Saudis by inciting unrest for several years at the hajj, the annual holy pilgrimage to Mecca for the world's Muslims. The Saudis, in turn, poured money into Saddam's Iraq, helping it stay afloat and eventually overwhelm Iran in the two neighbors' bloody struggle.

As the Iranian menace appeared to recede, the domestic threat posed by Sunni radicals -- always in the background -- reemerged. Terrorist attacks and plots in the mid-1990s demonstrated that Sunni jihadists remained active inside the kingdom. The 9/11 attacks, which involved 15 Saudis directly, and further exposed considerable Saudi financing of and involvement with al-Qaida in general, made the problem embarrassingly clear to all. But it took the al-Qaida-linked terrorist attacks that killed dozens in the kingdom in May 2003 to bring the problem home to the regime. The kingdom was at war.

Since 2003, the Saudis have been engaged in a low-level counterinsurgency effort against domestic jihadists, most of whom have an ideology similar to that of al-Qaida if they are not directly loyal to bin Laden himself. These jihadists have conducted an array of attacks against Western and Saudi targets in the kingdom. To the surprise of the Saudi regime, what seemed a small group of domestic radicals turned out to be the tip of the iceberg. Raids uncovered large stockpiles of weapons and explosives. The Saudi security services killed and arrested many radicals. But today the battle continues, with Saudi police and security officials bearing the brunt of the struggle.

The war in Iraq has boosted the jihadist threat in a number of ways, including greater danger to Saudi Arabia's own security. Many young Saudis have gone to Iraq to become martyrs in the fight against the United States and the Shiite-led Iraqi government -- but there they are also being exposed to and learning from radicals with a much broader agenda. One of the most troubling developments in Iraq is the emergence of a large number of Iraqi-spawned jihadists, in a country where just a few years ago the jihadists were primarily foreign. Indeed, the Saudis now border the world's top breeding ground for jihadists, which is also a magnet for them.

The 2005 terrorist attacks in Amman, Jordan, may be a harbinger for the kingdom. Though the Jordanian security services generally are highly effective, the attacks were planned from Iraq and largely involved Iraqis, making them difficult to disrupt. The kingdom could face similar challenges with Iraq-based jihadists, whether of Iraqi origin -- or Saudis who went there to fight. More attacks could include not only Western and Saudi government facilities, but the Saudi oil infrastructure. Insurgents regularly target Iraq's oil infrastructure, and the Saudi apparatus is also vulnerable. And an attack on Saudi Arabia's oil infrastructure, causing supply disruptions for the world's largest producer, could roil global markets to devastating effect.

As the United States has only bad options to choose from regarding Iraq, so it also goes for the Saudis. Demographic weight and Tehran's support appear to give Shiite factions the upper hand in the long-term in Iraq, which increases the risk Riyadh perceives from Iran. Yet trying to weaken the Iranians by aiding fellow Sunni groups is likely to lead Iran to further increase its aid and may play into the hands of jihadists, who are inextricably woven into many Sunni groups in Iraq today. As happened in the Iran-Iraq war, Saudi Arabia might then find itself under threat from Iraqi Shiite groups and Saudi Shiites angry over the kingdom's anti-Shiite actions.

Differences over Iraq could also worsen U.S.-Saudi relations. Already Saudi Arabia has held talks with Iranian officials regarding coordination in Iraq at a time when the Bush administration was pressing to isolate the regime in Tehran.

Yet, the biggest danger could be that, in a frantic attempt to undermine the Iranians, the Saudis start supporting various Sunni groups in Iraq. To date, there is no clear evidence of such a Saudi role; currently, the Sunni insurgency's strength draws from the anger of various Iraqi groups and massive caches of arms not secured under the U.S. occupation. But although Iraq is awash with weapons, money is another key to a thriving insurgency. Saudi support could certainly involve providing money to an array of groups, particularly tribal organizations or other groups at least willing to claim they are not anti-Saudi. It may also involve turning a blind eye as young Saudi volunteers go to Iraq to fight. Already, many of the suicide bombers in Iraq have been Saudis -- and this is occurring without the Saudi government openly allowing its citizens to go and fight in Iraq.

Unfortunately for the Saudis, these Sunni groups cannot be controlled. They will take the Saudis' money, but most will persist in their anti-Saudi agenda. They not only have an anti-Iraq and anti-Saudi agenda, they also want to kill as many Americans as possible. In Iraq they are networking and learning new skills such as sniper techniques and the construction of better improvised explosive devices. They can, and will, use this knowledge elsewhere in the region -- and perhaps internationally, if and when they can conduct such attacks.

Saudi Arabia has its own interests, and Washington should not pretend that they are identical to those of America. By recognizing these differences now, the United States may be able to head off some of the worst problems. Consistent and heavy pressure today to discourage the Saudis from supporting anti-Shiite jihadists is essential. Equally important, the United States must coordinate its Iran policy with Riyadh to make sure that the Saudis are confident that the United States will ensure the kingdom's security against Iranian ambitions. The Bush administration's rejection of meetings with the Iranians make this difficult coordination even harder.

Americans are not used to feeling pity for the Saudis, who are at best portrayed as venal and bumbling, and at worst as covert allies of Osama bin Laden. But we need to recognize that Saudi Arabia's potent fears over Iraq are real and must be addressed. Otherwise, Iraq's sectarian war could grow far worse -- and far wider -- before it is over.

Daniel Byman is the Director of the Center for Peace and Security Studies at Georgetown University and a non-resident senior fellow at the Saban Center for Middle East Policy at the Brookings Institution.