No candle in the wind, Anna Nicole Smith was more like a bonfire in a hailstorm -- and we couldn't pry our eyes away from her. 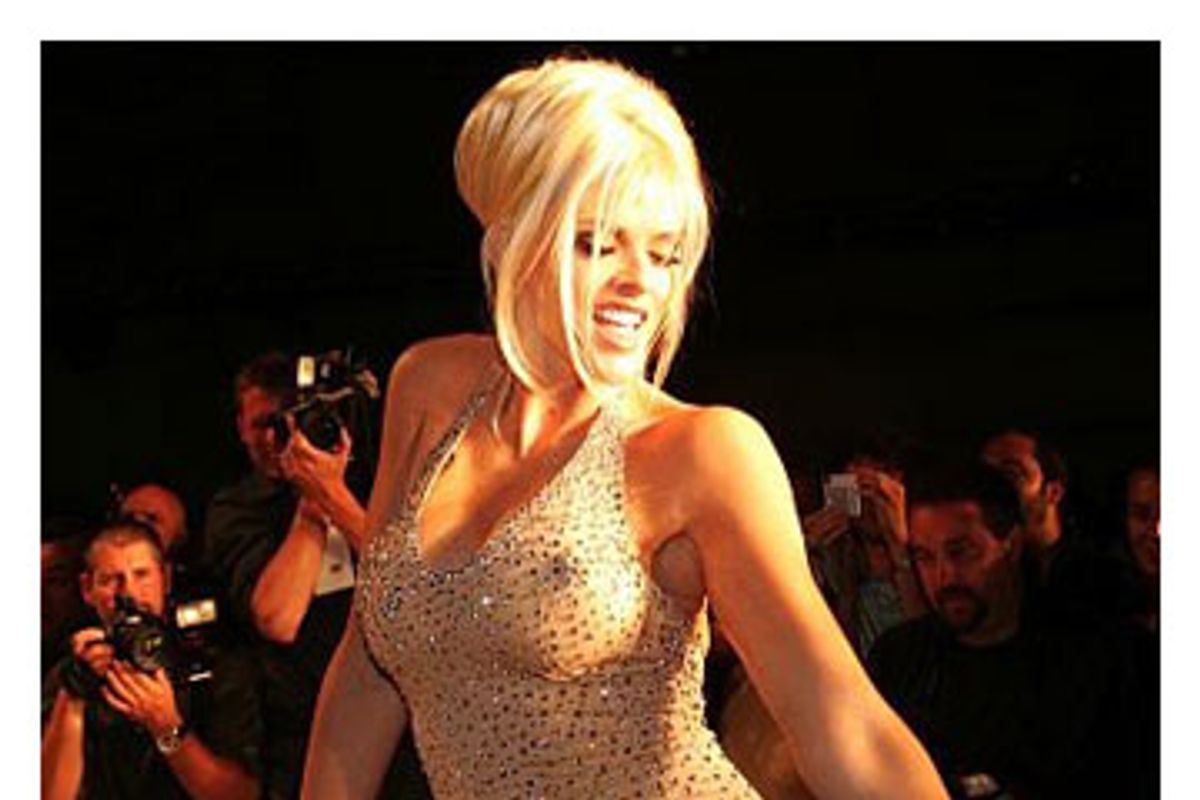 The story of Anna Nicole Smith -- dead like Elvis, discovered at the Hard Rock Hotel in Hollywood, Fla. -- hit like a massive mudslide, and overwhelmed an already monstrous week of astronaut diapers, the entire Ryan O'Neal family in handcuffs and the Scooter Libby trial, all of which were displaced to secondary positions on Technorati. But the press, as of this morning, still couldn't find much to say that was nice about her -- they were too busy beating up on a woman they perceived as their very own generational whipping blonde.

The yellow press is in shock, as if it can't believe that the "tabloid life" of the woman Radar referred to as "gossip's golden goose" is actually over. Its members can't seem to wrap themselves around the idea that she isn't theirs to abuse anymore, or that somewhere under the nipple tape and lip gloss, a human being is dead enough, now, to deserve a few seconds of more than just token respect.

TV pundits, deep into the night, were still sniggering over Smith's personal defects.

Over the evening, she was continually referred to as a "train wreck ..."

The snide, giggling, self-congratulatory Tom O'Neil of InTouch Weekly referred to the recently deceased woman as a "slob" on MSNBC. Repellent E! News hosts Ryan Seacrest and Debbie Matenopoulos were unable to summon even the smallest lick of anything that sounded like sympathy: "How tr-r-rragic. Anything after [Smith's death] seems trivial ... but there are other stories today! ... In other news, the Kim Kardashian sex tape ..." blah blah blah.

MSNBC's Joe Scarborough asked, again and again: "What was she famous for, aside from being famous?" Radar's Tyler Gray replied, with raised eyebrow, that Smith was famous primarily because of her "availability for parties ... She didn't come cheap," he added knowingly, "but she would join the party."

Richard Roeper in the Chicago Sun-Times tried to summon some kind of intelligent approach:

"The last time I saw Ms. Smith acting, it was on premium cable a couple of years ago. She was in a bathtub, naked, kissing another woman. It was somewhere between soft-core and full-on pornography -- and not to be cruel, but she wasn't even very believable in that performance.

"Nobody ever accused Ms. Smith of having any talent, and to my knowledge she never claimed to have any. She just acted like a star, and she was treated like a star -- and the fact that her death has everyone in the media (including yours truly) rushing to write something about her confirms that on some level, she won. She was a star."

So many stars are doing so badly, trying to withstand the collective hex of unkind limelight, what is really incredible is that there haven't been more deaths lately. Nothing shows so well how unkind we are, as a society, than the way we report on our falling women. Hollywood has been restless, cruel and itchy, jonesing for a real tragedy. It was getting bored merely humiliating people on "American Idol." Drug-addled Hollywood strumpets like Linsday Lohan, Courtney Love and Nicole Richie have all been on various deathwatch lists for quite some time, and the tabloids have been licking their chops, waiting to be fed a body.

Vickie Lynn Hogan of Mexia, Texas -- the woman Spy magazine once called a "super-duper-model" -- was ripe for the taking: She had always been compared to Marilyn Monroe, and she nursed these comparisons, right down to her own sense of victimization by a society that she perceived as having no respect for her, and to her self-fulfilling prophecy that she would die young and tragically.

Naturally, the death of her 20-year-old son didn't help, and neither did the methadone. It was clear she lacked coping skills. Following the death of Daniel Smith, three days after Anna Nicole gave birth to a baby girl, the tabloids reported that the distraught new mother was so sedated that she needed to be reinformed of his death, again and again, every time she woke up ... an excruciating ring of hell.

Even in such times of private agony, prurient interest now follows its victims everywhere. Wherever there's a cellphone and an Internet connection, the camera can steal a soul.

Doubt and suspicion are landing on Smith's "husband" and former attorney, Howard K. Stern -- and not for the first time. (Vito Carlucci, a private investigator, commented, "Some people keep seeming to end up in rooms where there's dead people.")

What seems more likely is that Stern was unable to control anything about Anna Nicole Smith, and unable to protect her from the tragic destiny of her cultural role. He was lamely dazzled by her blondness and breastiness and her collection of Lucite hooker shoes, and appears to have pathetically and submissively loved the woman -- but not enough to summon the backbone to stop enabling her self-destruction or stop others from watching it.

Hugh Hefner, at least, had some class, issuing a statement about how much Smith meant to him personally and to the whole "Playboy family."

Philip Kennicott of the Washington Post, in a thoughtful article, waxed philosophical about Smith's operatic, societal role as a condemned "courtesan," speculating that we never really forgave her for the outrageous gall she displayed when she married that super-rich, sick old man in a wheelchair:

"Poor Anna began her climb to fame and riches as a stripper, and in the end, she was a stripper again, seemingly uncontainable by ordinary clothing. She spilled out of her tops, she spilled into the tabloids, she was a mess. Her death gave you whiplash: Time to feel sad for a woman who was never supposed to be more than a source of amusement."

What needs saying -- what it seems nobody has yet said -- is that when she was able to suppress her demons enough to pull herself together and look her best, she was fabulously gorgeous. Numerous red-carpet moments, the footage of which we now run over and over again like a televised rosary in order to understand her death, reveal this. Anna Nicole was a star because she possessed an unusually large amount of beauty. At her best, she didn't evoke Marilyn Monroe so much as Anita Ekberg in "La Dolce Vita" -- the strapless black dress, mounds of white flesh, piles of blond hair. She was indelicate, but an unstable element nonetheless -- not so much a candle in the wind as a bonfire in a hailstorm. But the real similarity between Anna Nicole and Marilyn was their shimmering tension -- an unsettlingly powerful physical beauty, collapsing irresistibly in real time beneath the frailties of its hostess. She was entropy porn at its finest.

Our fascinated gaze was her real addiction -- and the humiliating media tractor pull between our disgust and our attraction for her was, in all likelihood, both her lover and her murderer. Fame, the only chemotherapy available for the desperate toxicity of narcissism, proves once again that it is deadly enough in its own right to be avoided.