Eddie Murphy straps on the big fat falsies and shakes them for all they're worth. So why is this movie such a drag? 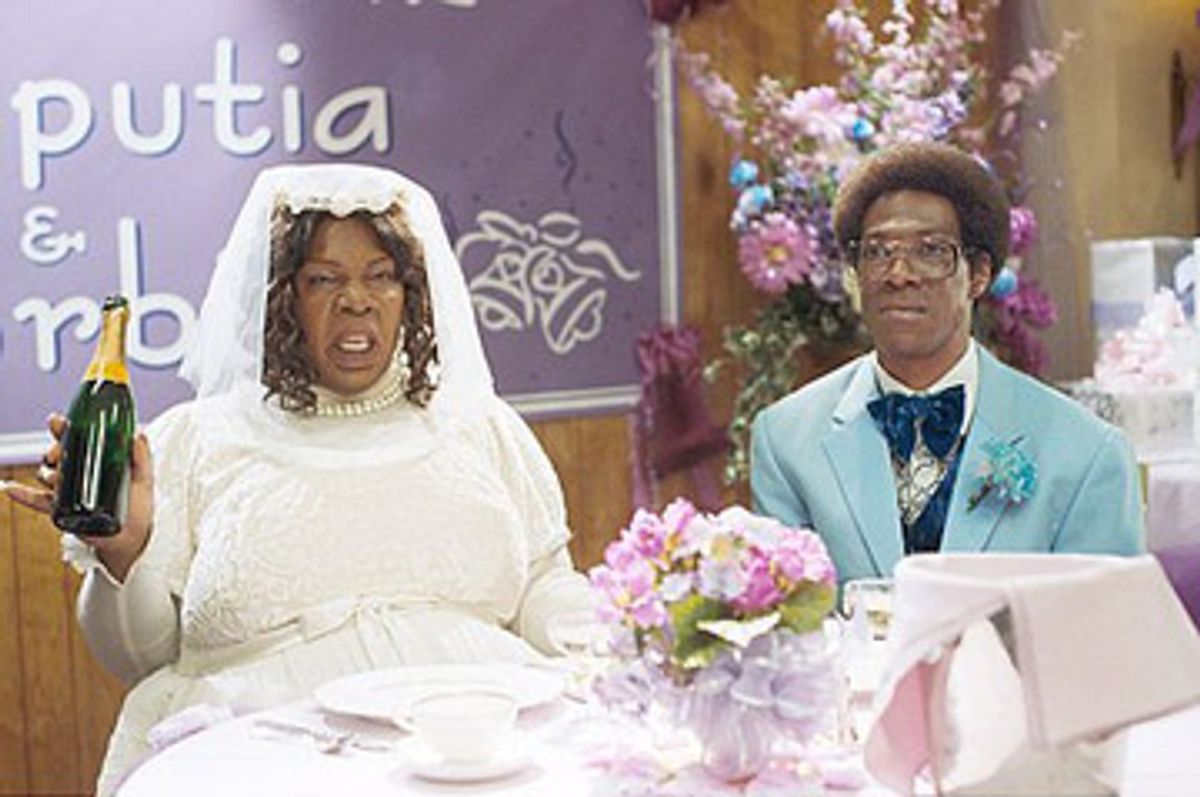 The trailer for the Eddie Murphy comedy "Norbit" shows Murphy, done up in a fat suit, wig and God-awful spandex drag, jiggling and shimmying to lascivious dance hits like the Pussycat Dolls' "Don't Cha." In the movie itself, there's a sequence where the character Murphy's playing, a kajillion-pound terror named Rasputia, presses her pendulous strap-on bosoms against a soapy car windshield, with Kelis' obtusely filthy "Milkshake" as her soundtrack. Rasputia doesn't doubt for a minute she's a hottie, which is supposed to be one of the movie's uproarious jokes. But she has so much confidence, so much swagger in her flabber, that it's impossible to accept her as an atrocity. Even loaded down with all that fake fat, she's almost capable of convincing us she's as good-looking as Eddie Murphy is.

There are so many problems with "Norbit" that when you try to pin one down, another one splooges out elsewhere. Murphy plays three roles here: the title character, a shy, lisping goofball with a winning gap-toothed smile; Mr. Wong, an elderly Chinese guy who runs a combination restaurant and orphanage; and the aforementioned Rasputia, Norbit's bossy, unprincipled, philandering wife. Norbit, whose parents dumped him at the orphanage in his infancy, was raised by Mr. Wong. (Picking up the squirming bundle, Wong takes one look at Norbit's little face and exclaims with dismay, "A black one! You can't give these away!") As a child at the orphanage, Norbit has one best friend, Kate, and they stage a makeshift wedding ceremony complete with giant rock-candy rings. But when Kate is adopted, she and Norbit are separated, supposedly forever. Norbit makes a new friend, the linebacker-size Rasputia, who fends off the bullies who are always tackling him. They grow up together and, simply because it never occurs to him to resist, he marries this Jell-O mountain of trouble -- unaware, of course, that his first love has grown up to be the svelte and lovely Thandie Newton, and that she will one day return to town, stirring up his old heartaches all over again.

The gags in "Norbit" are wearying and assaultive, and none of the actors -- including, sometimes, Murphy himself -- seem to know what to do with them. The movie was written by Jay Scherick and David Ronn, from a story by Eddie Murphy and his brother, Charles Murphy; the director is Brian Robbins, who can't get a firm grip on this squirmy material. The picture feels so desperate for laughs that it's almost embarrassing to watch: After Rasputia runs over a neighbor dog that she dislikes for no good reason, the little guy reappears with inert back legs and wheels strapped to his torso. Later, perhaps because that just isn't funny enough (or at all), he talks, advising Norbit in a tough-guy voice to more or less "waste the bitch." Done right, puerile humor can be freeing, exhilarating; but it can also make you feel like the prisoner of idiots, and "Norbit" is constricting in the worst way.

Murphy tries hard to make all three roles work, which may be a huge part of the problem. These performances have none of the warmth, the natural good humor, of those he gave in the "Nutty Professor" movies. His Norbit is the most winning, but he's also the most tiresome: After a while, you just can't get any more pleasure out of a pushover. Mr. Wong is mildly funny here and there: At one point he muses aloud about how much he dislikes black people and Jews, although they're crazy for Chinese food, and his air of comic resignation rings true, an affirmation that we're all mixed up in this together.

But Rasputia, who's supposed to be so repellent, is the movie's most fascinating invention. And she's an invention that just doesn't work. Rasputia does some pretty bad stuff, including bedding her power-jazz instructor (played by Marlon Wayans) right under Norbit's nose. Even if Norbit's old flame hadn't reappeared on the scene, we wouldn't wonder why he wishes he could be free of Rasputia. (And to even ask what Newton, a marvelous actress, is doing in a picture like this opens far too many painful questions about the kinds of roles available to women of color in Hollywood.) Rasputia is a horror, strutting around a water park in a pink bikini that covers about 2.6 percent of her not-so-square acreage, or accusing Norbit of having adjusted the seat in her tiny sports car as those unavoidable knockers press against the fur-covered steering wheel. But she believes so much in her attractiveness that we almost buy it too, even though that's not what the movie wants from us. Rasputia, tooling around in her silly clown-car, yodeling "Don't cha wish your girlfriend was hot like me?" isn't very funny, but she is a force of nature. Still, a little of her goes a long way. It ain't over 'til the fat lady sings. And sometimes, not even then.