The Constitution be damned, the attorney general has seized control of U.S. attorney appointments for partisan purposes. 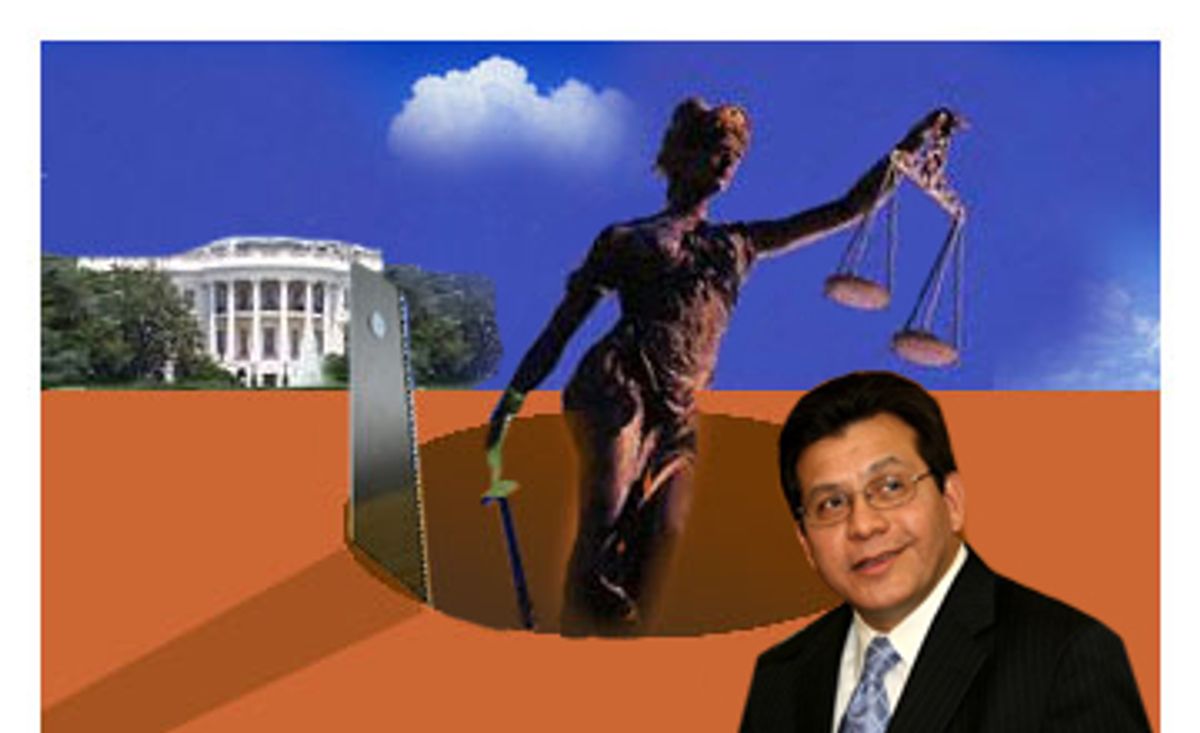 Under any circumstances, the Bush administration's sudden, explicitly political dismissal and replacement of United States attorneys in judicial districts across the country would be very troubling -- both as a violation of American law enforcement traditions and as a triumph of patronage over competence.

But as the story behind these strange decisions unfolds, a familiar theme is emerging. Again, the White House and the Justice Department have been exposed in a secretive attempt to expand executive power for partisan purposes. And again, their scheming is tainted with a nasty whiff of authoritarianism.

There is much more at stake here than a handful of federal jobs.

Leading senators of both parties are disturbed by these incidents because U.S. attorneys -- the powerful officials appointed by the president to prosecute federal crimes and defend federal interests in each of the nation's judicial districts -- are supposed to be as nonpartisan as possible. Democrats mostly appoint Democrats and Republicans mostly appoint Republicans, but the U.S. attorneys are usually chosen with the advice and consent of the senators from their home states, and then confirmed by the full Senate, with a decent respect for skill and experience as well as political connections.

The reason for this appointment process was simple: These prosecutors must police the politicians. They are expected to guard the nation's judicial system against the varieties of political abuse that are typical of authoritarian systems. They are granted a substantial degree of independence from the government in Washington, including the attorney general who functions as their boss.

To ensure that no U.S. attorney could be fired on a whim and replaced with a malleable hack, the relevant statute required that whenever a vacancy occurred in midterm, the replacement would be appointed by federal circuit judges rather than by the president. Getting rid of irksomely honest and nonpartisan prosecutors was difficult if not impossible.

But that wholesome safeguard was breached in December 2005, when the Senate renewed the Patriot Act. At the behest of the Justice Department, an aide to Sen. Arlen Specter slipped a provision into the bill that permitted the White House to place its own appointees in vacant U.S. attorney positions permanently and without Senate confirmation. So silently was this sleight of hand performed that Specter himself now claims, many months later, to have been completely unaware of the amendment's passage. (Of course, it would be nice if the senators actually read the legislation before they voted, particularly when they claim to be the authors.)

The staffer who reportedly performed this bit of dirty work is Michael O'Neill, a law professor at George Mason University and former clerk for Supreme Court Justice Clarence Thomas. As the Washington Times explained when O'Neill was appointed as the Senate Judiciary Committee's chief counsel, many observers believed that Specter had hired him to reassure conservatives of his loyalty to the Bush White House. Right-wing distrust had almost ousted the Pennsylvania moderate from the Judiciary chairmanship, and appointing O'Neill was apparently the price for keeping that post.

Evidently O'Neill rewarded Specter by sneaking through legislation to deprive him and his fellow senators of one of their most important powers, at the behest of an attorney general intent on aggrandizing executive power. The results of this backstage betrayal -- now playing out in a wave of politicized dismissals and hirings -- were perfectly predictable and utterly poisonous.

Carol Lam, the U.S. attorney in San Diego who successfully prosecuted the sensationally crooked Republican Rep. Randy "Duke" Cunningham, was fired for no known reason while she is still pursuing important leads in that historic case. Cunningham is supposed to be cooperating, but if Bush replaces her with a partisan stooge, he may be able to keep his secrets. Bud Cummings, the respected U.S. attorney in Little Rock, Ark., was canned to make room for a Republican opposition research operative and Karl Rove acolyte named Timothy Griffin. Could that conceivably have anything to do with Sen. Hillary Rodham Clinton's presidential candidacy? Paul Charlton, the U.S. attorney in Arizona, was thrown out while investigating allegations of corruption against Republican Rep. Rick Renzi.

And John McKay, the U.S. attorney in Seattle whose diligence has been praised by judges and lawyers of both parties, was simply ordered to quit last December, for no obvious reason. Although McKay's last evaluation by the Justice Department was excellent, the attorney general insists that all of these curious firings were due to "performance" issues.

Any such self-serving statements emanating from Alberto Gonzales should always be greeted with appropriate skepticism. So should the claim that he sought to seize control of interim U.S. attorney appointments because of his concern over the "separation of powers" issues supposedly inherent in judges' appointing prosecutors. As the McClatchy Newspapers reported on Jan. 26, Gonzales has named at least nine "conservative loyalists from the Bush administration's inner circle" to positions vacated by professional prosecutors.

On Thursday, the Senate Judiciary Committee voted to restore the old nonpartisan system for replacing U.S. attorneys and to require Senate confirmation of all new appointees. The full Senate and the House of Representatives should do likewise, despite Republican opposition, but that is not enough. The Senate Democrats should continue to probe the attorney general's little coup d'état and all of the resulting appointments. That is the best way to discourage future usurpations -- and to frustrate whatever skulduggery was afoot this time.