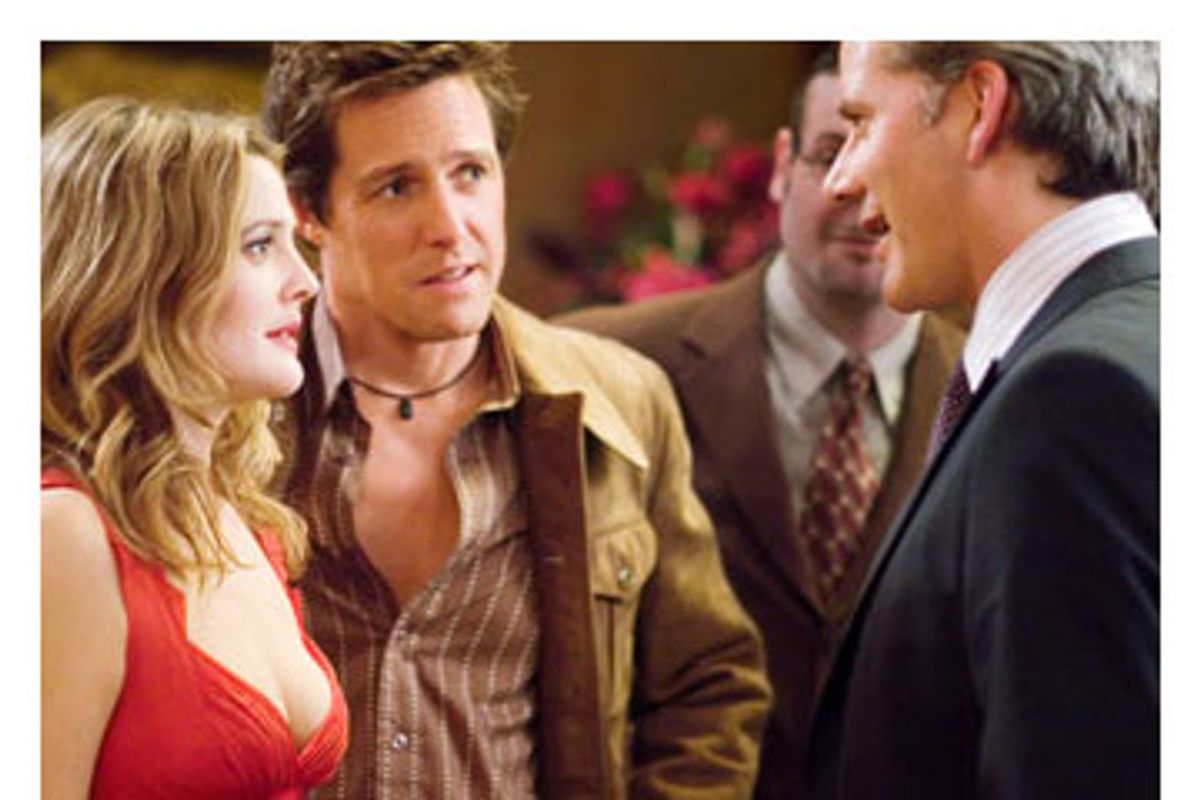 In Marc Lawrence's pleasingly casual new romantic comedy, "Music and Lyrics," Hugh Grant's Alex Fletcher, a washed-up '80s pop star, tries to convince his songwriting partner, Sophie Fisher (Drew Barrymore), that her sleazy ex-beau, who has just written an unflattering roman à clef about her, is no great shakes. So what if he just won the National Book Award? "Nothing can make you feel as good, as fast, as" -- and here Alex begins to sing, in a feather-soft voice that carries a memory of the Temptations' David Ruffin -- "I got sunshine on a cloudy day."

If there's one thing "Music and Lyrics" understands, it's the apparent effortlessness of a good pop song, the way, particularly on a bad day, it can seem like a gift floating down from the heavens. In reality, of course, someone had to sit down and write the damn thing, and "Music and Lyrics" gets to the heart of that, too. Alex Fletcher used to be in one of those cheesy, flashy bands -- this one, à la Wham! was called PoP, and the movie opens with an absurd and alarmingly accurate vintage-style video, replete with sugar-stiffened haircuts and clumsily staged dream sequences. Now, older and supposedly possessed of better taste, Alex lives in New York, and he makes a modest living re-creating his band's old hits and signature, if dated, dance moves at theme parks and state fairs. (At one point he expresses mild dismay when his manager, played by Brad Garrett of "Everybody Loves Raymond," informs him that Knott's Berry Farm has canceled.)

But Alex is about to get a break: A Shakira-like pop star, the serene yet sharklike Cora Corman (Haley Bennett), is soliciting songs from all her old favorite has-beens, and she invites Alex to submit one. If she likes it, she'll invite him to perform it with her onstage in one of her elaborate stage shows, which mingle Middle Eastern mysticism with good old American bump 'n' grind. Alex could sure use the exposure; the problem is, he can write melodies, but he's useless when it comes to lyrics.

Luckily, the woman who usually waters his plants has taken a few days off, and her replacement, Sophie, just happens to be a part-time slogan writer with a knack for words. Sophie flits into Alex's pristine Upper West Side apartment, looking like a '70s rock-star girlfriend in her fluttery butterfly dresses and floaty scarves, a direct contrast to Alex's uniform of trim black jackets and starched white shirts. She slops her massive, floppy shoulder bag on his gleaming grand piano; he not-so-discreetly removes it. These two can't help but fall in love.

They also, of course, will write an inescapably catchy song. And if "Music and Lyrics" has all the romantic comedy earmarks, it's also an interesting little study in the process of making something. After Sophie and Alex have been hustling 'round the clock to meet Cora's deadline, she wails, "I'm covered in songwriting grime!" and you can see how those precious little devils we call words have taken it out of her.

Lawrence, who also wrote the script, has such a light touch here that it's hard to believe he's the same guy who made the instantly forgettable "Two Weeks Notice." The picture has a few problems, chief among them that there just isn't enough conflict between the characters to sustain the gentle tension a good romantic comedy needs. But "Music and Lyrics" is still great fun to watch. It may be slight, but it's also buoyant and pleasurable, partly because the leads make the whole thing feel like a spontaneous duet. Lawrence trusts them to carry the picture, without feeling the need to throw in a lot of extraneous fluff.

Barrymore, a dippy cherub, is a great foil for Grant, and her timing is somehow both precise and elastic. (She pulls off a terrific little physical gag in which she pours two cups of coffee without ever lifting the spout of the coffee pot, drizzling the brew from one mug to the other without breaking her nonstop stream of patter.) And Grant is wonderful to watch: He makes the performance feel tossed off and spontaneous, but afterward, when you think about it, you begin to think it's really a masterstroke of neurotic precision. At one point Alex pays Sophie a very kind compliment, and she tells him, "That's wonderfully sensitive, Alex. Especially for someone who wears such tight pants." He weighs those words for half a beat and says, "It forces all the blood to my heart," a response that simultaneously, and sweetly, both disguises his sincerity and intensifies it.

The song Alex and Sophie write -- and, in one nicely wrought little scene, perform -- is a marvelously unsticky ballad called "Way Back Into Love." In real life it was written by the supremely gifted Adam Schlesinger, of the New Jersey band Fountains of Wayne, who also did the music for the terrific, and sorely underappreciated, 1996 Tom Hanks feature "That Thing You Do!" Two days after seeing "Music and Lyrics," I realized I had a song fragment drifting through my head -- really just a few scraps of melody with some stray words stuck to it -- that I couldn't immediately name. Eventually I recognized this elusive specter as "Way Back Into Love," a song I'd heard, in various cleverly stitched-together bits and pieces, maybe four or five times during the course of "Music and Lyrics." Would I want to download "Way Back Into Love" and listen to it dozens of times? Probably not. But I still marvel at the way the song followed me out of the movie theater, hid for a few days and then suddenly re-emerged, unbidden. "Music and Lyrics" is an enjoyable trifle, but it also gets at the idea that any kind of pop craftsmanship, done right, is seriously hard work.