It cares more about Mary Cheney's gayness than it does about the dangerous actions of Dick Cheney's son-in-law, Philip Perry. 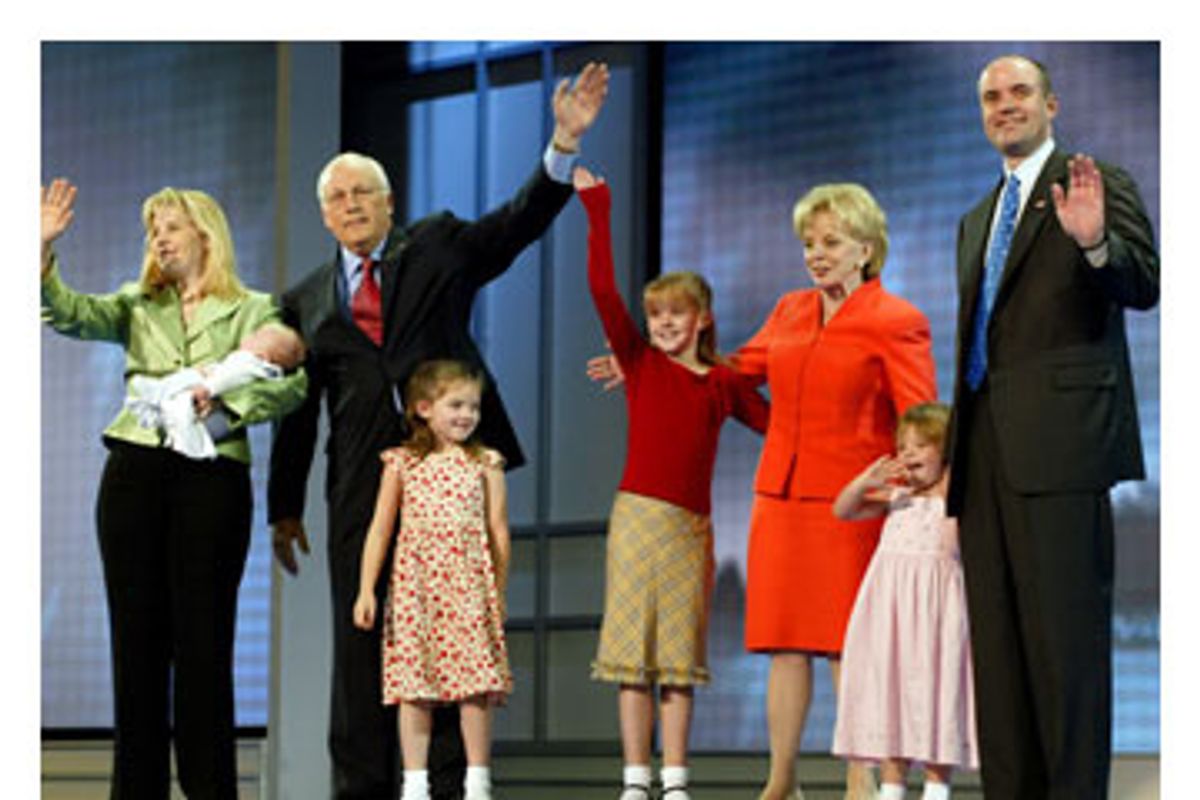 Did you hear that Dick Cheney's lesbian daughter is having a baby? Of course you did -- and so did everyone else -- because over the past two months, the controversial pregnancy of Mary Cheney has been noted and debated on every almost every significant news outlet in America.

When Wolf Blitzer opened up that touchy topic during an interview on CNN, the vice president responded with his trademark snarl. Mary Cheney seems to resent questions about her personal life, too, except when she is promoting her book or marketing Coors beer.

Embarrassing as the contradictions between his gay daughter and his homophobic party may be, however, the vice president should be grateful that the mainstream media hasn't turned the spotlight on his son-in-law.

The man who married straight daughter Liz Cheney is a sharp conservative lawyer named Philip Perry. Like his wife, who serves as deputy assistant secretary of state for Near Eastern affairs, Perry has held a series of high-level patronage appointments in the Bush administration. Not long after his father-in-law took office in 2001, President Bush appointed Perry to the third-ranking position in the Justice Department; from there he moved to the top legal position in the Office of Management and Budget and later became general counsel to the Department of Homeland Security, with intermittent stints in the private sector.

But the true scandal of Perry's career in government and law is less about blatant nepotism and more about corporate cronyism.

As the Washington Monthly reveals in its current issue, Perry has spent the past few years at DHS obstructing federal and state regulation of the nation's chemical industry, which still remains vulnerable to a devastating terrorist attack -- and which has paid millions of dollars to Latham & Watkins, the Washington law firm where he has been a partner and lobbyist, earning as much as $700,000 a year. (Having just resigned from Homeland Security last month, Perry could soon return to Latham, thus completing his third circuit through the revolving door.)

Perry's crowning achievement in the months before he quit the federal government is a set of laws and regulations that permit chemical manufacturers to decide whether and how to improve the notoriously lax security at their plants. Last fall, with Perry overseeing the legislative process, Congress passed a feeble bill that was supposed to force reform before a disaster occurs. The hardworking Perry made sure that the bill was rendered even more toothless when he and his staff set up the regulations to enforce it. Those rules include a special provision designed to frustrate vulnerable states such as New Jersey from passing stronger regulations, which will be preempted by the weak federal law.

In an interview with the Washington Monthly, Sen. Frank Lautenberg, D-N.J., furiously excoriated the Bush administration for coddling its corporate friends. "In order to please their cronies in the chemical industry, the Bush administration is willing to put the health and safety of millions of people at risk," he said of Perry's handiwork.

Or as Art Levine himself put it in his article: "A flippant critic might say the father-in-law has been prosecuting a war that creates more terrorists abroad, while the son-in-law has been working to ensure they'll have easy targets at home. But it's more precise to say that White House officials really, really don't want to alienate the chemical industry, and Perry has been really, really willing to help them not do it."

Meanwhile, as Perry was preparing to leave his sinecure and return to the private sector, he came under severe criticism from within the government as well. On Feb. 13, Comptroller General David Walker, one of the more independent-minded officials in the capital, reported to Congress that Perry had purposely frustrated every effort by the Government Accountability Office to monitor the Department of Homeland Security -- which is widely regarded as a wasteful, ineffective, lobbyist-infested disaster.

Does that strike you as an important story? Obviously the security of the chemical industry is a matter of critical importance, perhaps even more urgent than a lesbian pregnancy in the Cheney family. (I should admit that I may be biased on the subject, because the Nation Institute Investigative Fund, which I recently joined as director, helped to finance Levine's research last year.)

Someday the potential damage done to national security by Philip Perry may cost us very dearly, as another penetrating article in the Washington Monthly by terror expert Stephen Flynn explains in grave detail. Hundreds of chemical facilities across the country are inadequately protected, which Levine proved when he casually infiltrated one of them, and the most dangerous could kill tens of thousands of people if blown up by terrorists.

Yet so far the mainstream media has more or less ignored this story of public peril and corporate influence, despite the added frisson of the Cheney connection. Lesbian baby gossip is so much juicier, so much easier to report, so much simpler to sensationalize -- and so much more fascinating for the Washington press corps, whose priorities are as warped and trivial as the tabloid culture they now emulate.