Not only is Michael Apted's historical drama about an anti-slavery activist lively and funny -- it stars a serious dreamboat. Huzzah! 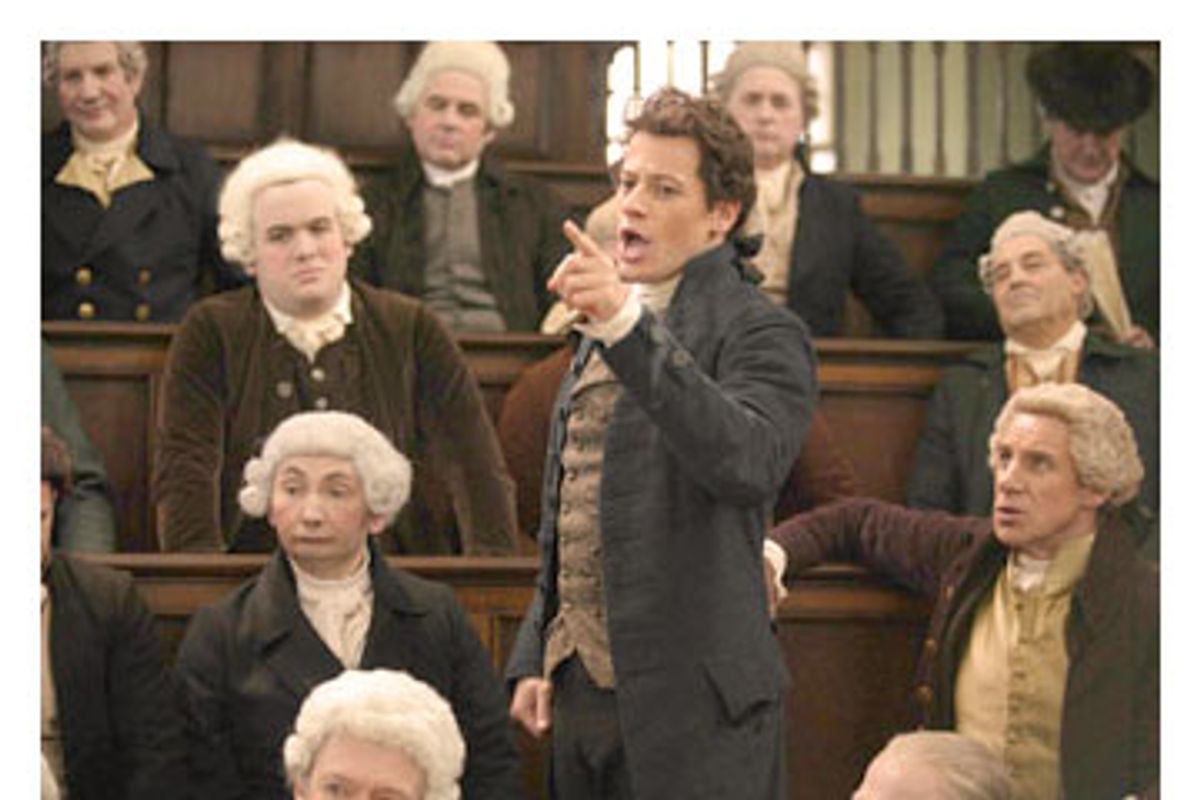 The trailer for Michael Apted's "Amazing Grace," a historical drama drawn from the story of British abolitionist William Wilberforce, makes the movie look like one of those rousing pictures about social injustice in which the hero delivers fiery speeches in the service of an extremely unpopular cause, one he'll go to his deathbed fighting for. And huzzah! That's exactly what "Amazing Grace" is. In the first 10 minutes, I feared the picture would be dull and earnest -- until, about a half-hour later, I realized it was lively and earnest, and also refreshingly, unapologetically movielike.

Given the choice between a sensitive, tasteful rendering of what we suppose history must have been like and a flamboyant dash of dramatic invention, Apted goes for maximum punch every time: Just as the gentlemanly Wilberforce -- he's played by sturdy Welsh dreamboat Ioan Gruffudd -- is waffling between a career in politics and religion, a raggedy anti-slavery radical (played with wonderful, wild-eyed zeal by Rufus Sewell) shows up at his country estate and spills a bag full of rusty shackles and leg irons on his dinner table. Wilberforce sees his future, and so do we.

Liberals tend to be suspicious of showmanship, especially when it comes to movies: We like our treatises drab and instructional, thanks. Apted has no use for that. His picture, openhearted and enthusiastic, is partly an ode to Wilberforce and partly a love letter to the simple act of taking action. Contrary to popular belief, old hippies didn't invent activism: The long, proud tradition of striving for social and political change stretches way back, further, even than 1797, the year in which "Amazing Grace" opens. Apted and screenwriter Steven Knight tell the story in a series of flashbacks and flash-forwards, necessitated partly by the fact that Wilberforce, who became a member of Parliament at age 23 in 1782 and took on the Abolitionists' cause in 1787, proposed anti-slave-trade legislation every year, for 18 years, before it was passed.

You don't win that kind of victory by being a layabout, and "Amazing Grace" shows us a guy who worked tirelessly even through illness and medication-induced fuzziness. (He suffered from colitis, which his doctors treated with laudanum.) Gruffudd plays Wilberforce with a mix of earthiness and reserved soulfulness: Even when he's wandering around his massive property (he was born into a wealthy family), marveling at spider webs and toying with the idea of leaving Parliament to spread the word of God, he still looks, somehow, grounded in the real world.

That's significant, because many of the characters around him are people whose real-life bodies now rest in Westminster Abbey. But Apted isn't interested in genuflection; he's more interested in divining what may have made these people tick. And so Wilberforce's dealings with people like his close friend William Pitt (Benedict Cumberbatch), a former schoolmate who became the youngest-ever British prime minister and whose sympathy for Wilberforce's cause buoyed him through rough times, have a ring of truth to them -- partly because Apted allows these very serious young men to do goofy schoolboy stuff, like run through fields in bare feet and unlaced blouses.

"Amazing Grace" is filled with English actors, veterans and relative newcomers alike, and it's pleasurable to watch them all: Albert Finney, in a rough cloth tunic, plays Wilberforce's mentor John Newton, a former slave-ship captain who recognized his sins and became an Evangelical pastor. (He also wrote the words to "Amazing Grace," which Gruffudd's Wilberforce sings, a cappella, in rich, rolling tones that echo nothing so much as the motion of a ship at sea.) Ciaran Hinds shows up as a bewigged Parliament baddie; Toby Jones, a pale, powdered duke. The luminous Romola Garai ("I Capture the Castle") plays Barbara Spooner, the civic-minded young woman who becomes Wilberforce's wife; the Senegalese musician Youssou N'Dour, in his acting debut, is the eloquent Ouladah Equiano, a former slave who bought his own freedom, and whose story helped move Wilberforce to action.

To bring Wilberforce to life, Apted uses almost every classic moviemaking tool available to him. I don't know that I've ever seen a film about the anti- slavery movement that had so many jokes: When an older MP played by Michael Gambon (in a small, superbly shaped performance) joins Wilberforce's tiny band of supporters, he doesn't hesitate to inquire, politely, of course, if they might be inclined to give him a drink. And for pure drama, Apted knows what works: When Wilberforce unfurls a petition, containing the signatures of hundreds of English citizens who oppose slavery, it rolls across the floor of Parliament like an endless magic document. It's a stunt, a kind of forerunner to John and Yoko's Bed-In, designed to impress and shock and challenge. In the movie's terms, at least, Wilberforce knew the power of an artful, well-timed flourish.

There's a lot of expository dialogue in "Amazing Grace," but even when it's slightly clumsy, the conviction behind it keeps you from laughing at it. The music, by David Arnold, is the picture's biggest flaw. Apted seems to like "big" movie music, which is an asset when you bring on someone like John Barry (which Apted did for "Enigma," a terrific, underappreciated picture with a lovely score). But Arnold -- who recently wrote a fine score for "Casino Royale" -- doesn't have a tight enough rein on the material here: There's too much bombast, with too little real weight.

But it's easy to forgive "Amazing Grace" its sins. The picture was beautifully shot by Remi Adefarasin, who captures the understated grandeur of pastures and Parliament alike. Apted uses a great deal of visual shorthand here: Wilberforce's sprawling country home is filled with friendly, energetic little dust-moppers, dogs clearly chosen for their personalities and for companionship, rather than for their ability to grab pheasants in their jaws. A crow sits on an indoor perch, as if he belonged there; a hare warms itself on its own chair by the fire. These cues tell us that this Wilberforce fellow must have been a really good guy, a champion of human rights whose regard extended to all creatures. (He did, after all, help found the Society for the Protection of Animals.)

After I saw "Amazing Grace," I rushed home to Google Images to find out if Wilberforce was really as good-looking as Ioan Gruffudd. The verdict? Not so much. For one thing, Wilberforce was about 5 feet tall; Gruffudd looks tall enough to have to duck when going through certain doorways.

Then again, think of that moment in "The Stunt Man," when Peter O'Toole, riffing on the power of illusion in movies, asks, "How tall is King Kong?" In the movies, even physical stature is theoretical. You need a good, strong man to play a figure like William Wilberforce. That he looks like a movie star is a plus.