The British retreat from Iraq brings peril for U.S. troops

Vice President Cheney says the British are leaving southern Iraq because things are going so well. In the real world, Basra is a mess. 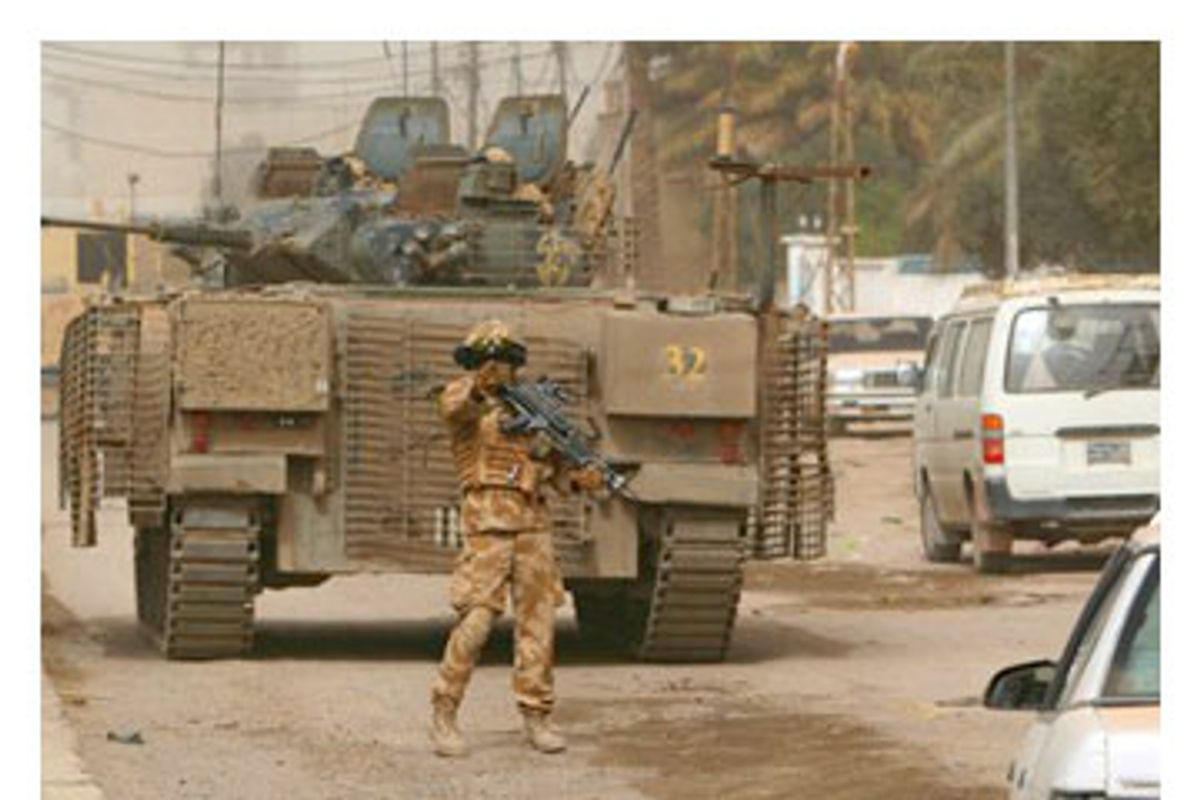 Tony Blair's announcement that Britain would withdraw 1,600 troops from southern Iraq by May, and aim for further significant withdrawals by the end of 2007, drew praise from U.S. Vice President Dick Cheney. "What I see," said Cheney, "is an affirmation of the fact that there are parts of Iraq where things are going pretty well."

In reality, southern Iraq is a quagmire that has defeated all British efforts to impose order, and Blair was pressed by his military commanders to get out altogether -- and quickly. The departure has only been slowed, for the moment, by the pleas of Bush administration officials like Cheney. And far from the disingenuously upbeat prognosis offered by the vice president, the British withdrawal could spell severe trouble for both the Iraqi government and for U.S. troops in that country.

The British helped provide the security that allowed private supply convoys bearing fuel, food and ammunition to travel from Kuwait up through Shiite-held territory to the U.S. military's forward operating bases in and around Baghdad and in Anbar province. Col. Pat Lang, a retired senior officer with the Defense Intelligence Agency, has pointed out that if Shiite militias began attacking those trucks, American troops in the center-north of the country would become sitting ducks for the Sunni Arab guerrillas.

The other danger posed by the British withdrawal is to Iraq's economy. The southern port city of Basra is the country's primary economic window on the world. Exports of the 1.6 million barrels a day of petroleum it managed to produce in January all went out of Basra. The pipeline that used to take Iraqi exports from the northern oil city of Kirkuk to Ceyhan on Turkey's Mediterranean coast has been subject to constant sabotage. The Iraqi state depends on the revenue realized from Basra's exports for its survival. As it is, it has been charged that militias siphon off $2 billion a year in petroleum revenues through smuggling operations. Were the central government to lose control of even more of those revenues, it could be starved to death.

And the danger is imminent. Although it is often alleged that Basra is relatively calm because it lacks Sunnis, neither claim is true. Though heavily Shiite, Basra also has tens of thousands of Sunnis -- even, perhaps, the odd al-Qaida operative. Sunni spokesmen such as Qatar-based Yusuf al-Qaradawi maintain that thousands of Sunnis have been driven out of the city and that a hundred Sunni mosques have been confiscated by Shiites. The Shiite-dominated Iraqi government denies these allegations.

And Basra is certainly not calm. The British have faced a difficult situation in the city during the past two years in particular, which has not been helped by the recent deterioration in relations throughout Iraq between Coalition troops and the Mahdi army of nationalist Shiite cleric Muqtada al-Sadr. In largely Shiite southern Iraq, the British have lost 132 troops to attacks by militiamen, many of them involving roadside bombs. British bases and headquarters are constantly targeted with mortar fire and Katyusha rockets, and often nearby Iraqis are killed by accident in these attacks. Last Oct. 30, the British were forced to relocate most of the staff at the British consulate in Basra out to the airport because the consulate kept coming under mortar fire. When the British consulate cannot even function in the heart of a city, it is a sign of poor security.

On Feb. 5, Basra police chief Maj. Gen. Muhammad al-Musawi had called for the British to turn over security duties entirely to Iraqi forces. The British had just been attacked at their headquarters downtown, and it was widely felt in Basra that the presence of the British troops was stirring up Shiite militiamen to engage in violence. There was no prospect of the attacks on British troops tapering off as long as they remained in the city, al-Musawi implied. Even British military sources began admitting that they might be doing more harm than good in the city.

On Feb. 16, the Iraqi newspaper Ilaf reported that British forces had launched a huge military campaign against the Mahdi army and the Sadr movement of Muqtada al-Sadr in Basra. It described violent clashes between the two in the districts of Jumhuriya, Hayaniya and Tuwasa. Twenty senior leaders of the Sadr movement were arrested throughout the city.

Reuters reported on Feb. 18 that a joint British and Iraqi army patrol had come under attack by Mahdi army militiamen firing machine guns and rocket-propelled grenades when it passed through the Shiite ghetto of Hayaniya in Basra. They returned fire, killing three militiamen. Reuters explained, "The battle erupted during a crackdown by 3,000 Iraqi and British troops in the oil port on violence by criminal gangs and feuding Shiite militias."

If there are criminal gangs and feuding Shiite militias in Basra that are so brazen as to start a firefight with the British military, then it is hardly the success story painted by Cheney. A day later, on Feb. 19, an Iranian satellite television news channel reported on "mass demonstrations" by thousands in Basra against British arrests of local residents. Demonstrators also charged that British troops had "humiliated" women and the elderly.

The Iraqi institutions that the British will leave behind them don't promise a quiet time for the Americans either. In the provincial elections held in January 2005, the Shiite religious parties swept to power on the Basra Governorate's council. Twenty of the 41 seats went to the Supreme Council for Islamic Revolution in Iraq, or SCIRI, a party close to Iran that seeks an Islamic state and wishes to see Basra part of a Shiite super-province in the south. The Virtue Party of Ayatollah Muhammad al-Ya'qubi put together a coalition that controlled the other 21 seats, giving it a majority and allowing it to appoint the governor and police chief.

The Virtue Party infiltrated its supporters into the Basra police force, as did SCIRI. Both parties fielded their militias to patrol neighborhoods and impose a puritanical moralizing on the population, destroying liquor and video stores and forcing girls to veil. The militias are accused of engaging in turf wars for rights to petroleum smuggling. They compete with each other, with the Mahdi army, and with Marsh Arab tribesmen, who often function as mafias or militias themselves.

In the summer of 2006, after Iraqi authorities had announced that Basra's citizens were being assassinated at the rate of one an hour, Prime Minister Nouri al-Maliki deployed Iraq's 10th Army Division to Basra. They initially set up checkpoints. But the Arab press reported that they took so much sniper fire that at length they deserted their checkpoints and faded into the background. Although they have been more aggressive this winter, patrolling with British troops, it is unlikely that they could take on the militias and Marsh Arab tribesmen on their own anytime soon.

It is unsurprising, therefore, that U.S. Ambassador Zalmay Khalilzad protested British withdrawal plans last month, telling the BBC, "Our preference would be -- the longer we stay together here, the better." He was certainly speaking on behalf of Cheney, even if the vice president, confronted with the actual departure of America's most important ally, now chooses to feign optimism. Cheney's sunny misdirection obscures the dangers of a British withdrawal in the absence of any sign of reconciliation by Iraq's warring factions. Without a United Nations peacekeeping force or the like to tamp down violence, the British retreat from Basra is unlikely to produce positive results. In the worst-case scenario, it could leave vital U.S. supply lines vulnerable and allow a key exporting port to be closed or hijacked, endangering the survival of the Baghdad government.