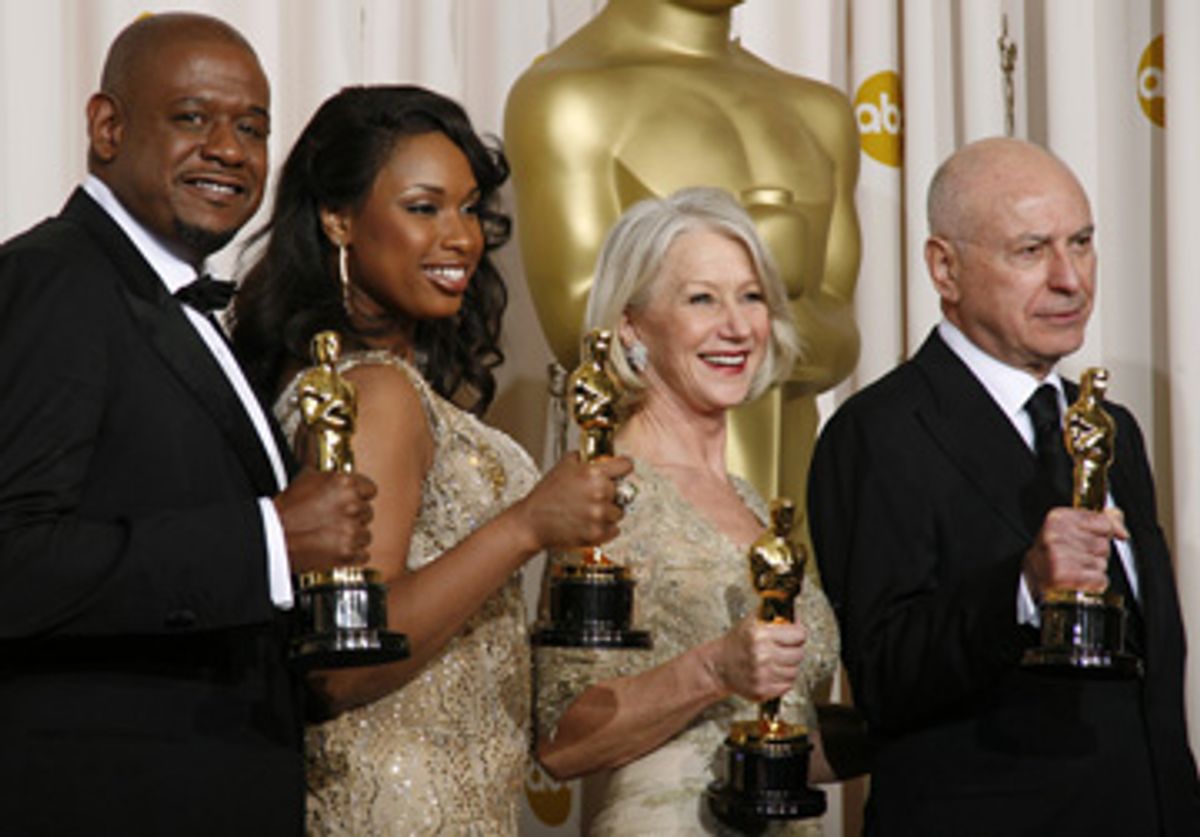 It was a dramatic reversal for these Academy Awards, right from the jump.

This Oscar night was marked by its unusual candor and humility. For once, the red carpet was actually vacuumed, as opposed to simply being a vacuum.

The stars -- epitomized by the bountiful and irresistibly deserving Jennifer Hudson -- seemed intent on demonstrating that they were all just good, decent, regular folk who happened to have the good sense and thrift to reupholster an old, sturdy and traditional approach to their careers: professionalism. These stars seemed out to rehabilitate Hollywood, after its grisly collapse from a monthlong tabloid overdose, and remind us that fame, when it is functional, is something that arises from actual talent.

Stars are supposed to be abnormally gifted, yet so normal seeming that they are somehow supernormal. It seemed that even the biggest and most perennial stars were working their "normalness" like the family minivan.

Helen Mirren, who has been a star for decades, described herself as "just a girl from Essex"; Forest Whitaker, too, was "just a kid from Texas."

In a red-carpet interview, Ryan Gosling attributed his good fortune in being nominated for best actor to his mother's needlepoint sentiment that "if you're making the decision for money, you're making the wrong decision.'"

There was refreshing honesty. Leonardo DiCaprio, on the red carpet, commented, apropos of "Blood Diamond," that it was "rare within the studio system that you get to do a movie with something important to say."

Ooooh! Hey! What's going on? That wasn't the Entertainment Industrial Complex party line! And he wasn't even arrested or anything!

Welcome to the all-new Celebrity 2.0: We're exactly like you (only talented).

Seriously: If this is a sea change, it's a good one, because things were starting to get pretty hideola under the old Hollywood sign.

It is a sign that society has lost its way when our fragile Hollywood coal-mine canaries start imagining, en masse, that they can beat depression and recover their lost charisma if they just remove their eyelids, get another nose job, and eat nothing but methadone for a while.

Nicole Kidman's motionless face looked like it recently had more needles in it than a saguaro cactus.

"You can't think of [walking the red carpet] as important ... It's almost a cancerous idea if you allow yourself to need it," said Will Smith, who, sadly, seemed to be needing it, despite his best efforts. Will Smith is starting to get that not-so-Fresh Prince feeling.

His wife Jada's forceful, toothy bark laughing evokes neither happiness nor fun, but I do recall seeing similar athleticism in footage of an alligator eating a live pelican.

But Oscar was out to make a difference: This year, he even wore eco-conscious green. Overall, this was a kinder, homier Oscar celebration. It was a little boring and flabby, but well intentioned -- just like its host, Ellen DeGeneres.

Ellen took a contrary approach and went for a casual feel ... too casual. Her red velour leisure suit would have looked right at home playing the Wurlitzer for the State Farm Senior Golf Classic.

It appears that hosting daytime TV, in some cases, retards the part of the brain responsible for selecting eveningwear. It was a relief when Ellen changed, midway through, into a slightly more upscale, all white, Usher-esque ensemble, but her third and final outfit of the evening looked like she'd bribed it off of one of the busboys at Musso & Frank's. With bigger mutton chops, she'd have been a dead ringer for Isaac from "The Love Boat."

There seemed to be a subtle social-consciousness-boosting leitmotif suggesting that the night was occupied by Jodie Foster's army, and Thesbians were this year's minority elect.

But I don't care if you're male, female, gay, straight, all or none of the above: While getting dressed to host the Oscars, ask yourself: "Can I wear this to go bowling?" If the answer is yes, then you're much too comfortable and must change.

But OK, she sure does know how to make her audience feel all warm and snuggly, as if they've just been swaddled in polar fleece and given a big bowl of chocolatey Klonopin Puffs.

While wandering through the intimidatingly A-list audience, chock-full of her wonky, trademark Yep! I sure am me! silliness, Ellen proved that Ellen is always just Ellen, and always just talks about Ellen.

Getting pictures of herself with Clint for her MySpace page! Ho, what a character! Actually dropping a script (and the name of her production company) in Scorsese's lap! She was just one big Ellen-ball! It was the El-Word all night long, and boy, was she a run-on sentence all by her lonesome. She was all-Ellen-veloping.

Sorry, gals, but when self-effacingness is relentlessly self-referential, it is merely self-ish. Or, in this case, 'Ellish.

But there were good parts.

Despite stiff competition, the beloved Alan Arkin was a delirious pleasure to watch accepting the best supporting actor award for his rowdy Grandpa in "Little Miss Sunshine." His speech was full of sublime values that tuned the collective vibrations a bit higher, on a feel-good level, than Ellen's navel:

There was undeniably great eye candy. The interpretive-dance shadow-puppet people were a creative, artsy touch, and it was nice to know that at least one professional dance company earned enough money to exist this year.

The leading ladies reverted back to the safety zone of old Hollywood glamour, which is never a disappointment or a mistake. Quite a few starlets looked jaw-droppingly beautiful in that mesmerizing, nostalgic, light-giving kind of way, with their bare, pearly shoulders, deep red lips and bejeweled metallic gowns cut in the vintage Dior style that holds a willowy body like champagne in a tall flute.

I am impressed by Anne Hathaway, the ingénue of "The Devil Wears Prada." She is poised yet dorky, relaxed yet nervous, preternaturally stunning yet somehow approachable-looking. She has a remarkable quality of seeming like the world's nicest waitress while wearing a Valentino gown made of unborn ballerina fur. According to the laws of physics, she can't actually exist, yet there she was.

Beyoncé, aka "Bodzilla," that most wholesome and breathtaking of starlets, seemed like a lightweight to me until "Dreamgirls," but now I believe she actually has enough personal, autonomous star power to stabilize uranium.

Motherhood seems to have been a good tenderizer for Gwyneth Paltrow, who is no longer apologetically brittle, but curvy and sumptuous. She was ivory, orange and brightly refreshing, like the world's most expensive Creamsicle. Rachel Weisz, likewise, seems to be enjoying a personal zenith of spectacular comeliness, now that both her inner and outer selves look softer. Best actress winner Helen Mirren was regal, splendid and inspiringly fuckable without even a "for her age" qualifier.

It was nice to see that Penélope Cruz has come a long way from being Tom Cruise's exotic bird. Even wonder-child Abigail Breslin was visually fantastic, glowing prettily in a dress that made her look like she came in her own Easter basket.

Celine Dion has been my personal punching-diva for years, but I actually think motherhood and nonstop Vegas performances have done her a world of good, in terms of looking less agonized by self-imposed professional discipline clamps. She looked like she was enjoying herself, and like she really loves singing. One cannot deny that her weird pink dress was packed to the rivets with professional mega-chops in prime condition, and an enhanced sense of humanity.

But I need a crying bib to watch Jennifer Hudson. I had to wring out my blouse after "Dreamgirls."

Hudson is so refreshingly not of that world. She's a perfect Rosetta stone for the big secret of star power -- it's not about how small your nose is, but how expansively and gracefully you accept yourself, how much of yourself you can lovingly reveal.

Her win was everything Halle Berry's 2002 moment should have been: a poised, yet emotional display of the glorious merits of organic virtue. Besides tree-bending vocal prowess, she has that Aretha Franklin thing that raises all the hair on the back of your arms: It's called Soul.

I believe that proximity to Hudson has made Beyoncé three times the singer she used to be. Through Hudson's divine example, Beyoncé finally figured out how to "put some stank on it." The two of them were a typhoon of melismatic emergency, harmonizing together like two police cars in love.

There were a few more low points.

Jack Nicholson, in solidarity with Britney, I suppose ... shaved his head, and looked like Mr. Unclean.

Kate Winslet's dress was a poisonous caterpillar green, I guess so her envy wouldn't show as much as it has in previous years ... but to no avail.

Melissa Etheridge's heavy, browbeating and pedantic "Inconvenient Truth" theme song won an Oscar -- undeservedly, I believe. But it was certainly a step forward for society that she made Oscar history by thanking her wife.

But hey, what is not to like about the Red Sox-like curse of Martin Scorsese finally lifting?

"The Departed" won best picture and best director, and not for nothing: It was structurally perfect, and made by a master.

Was it as good a movie experience as "Little Miss Sunshine"? I think no.

But was it the epitome of film craft? Yes. A technically virtuosic, elegant film machine: a treasure to be celebrated.

Finally, there was one genuinely historic moment: Jerry Seinfeld presenting the Academy Award to Al Gore, who received an A-List standing O in front of a billion viewers. Respect for the office of the American presidency notwithstanding, it should be noted that Sunday night, Hollywood successfully Photoshopped Al Gore's foot into George W.'s ass.

The plates are shifting, people. The trend is irreversible. At this rate, Texas and the entire Republican Party will be completely underwater by 2008.

It makes a larger cultural sense, this renewed appreciation for the genuine article that these Oscars seemed to reflect.

America has been at war for four years. The big unpopular war that the president and his lockstep administration declared was against the Truth. It seems the American people are engaged in a soft revolution: We are simply refusing to get in the back of that hateful bus anymore. We just like things to be honest.

Helen Mirren commented on societal dissatisfaction with a tone-deaf, disconnected leader in a montage about the queen: "She is so iconic and well known, and yet we don't know her at all."

Times, they are a-changin'.