With food blogs multiplying like weeds and millions of recipes available with a simple keystroke, has the Internet made the cookbook obsolete? 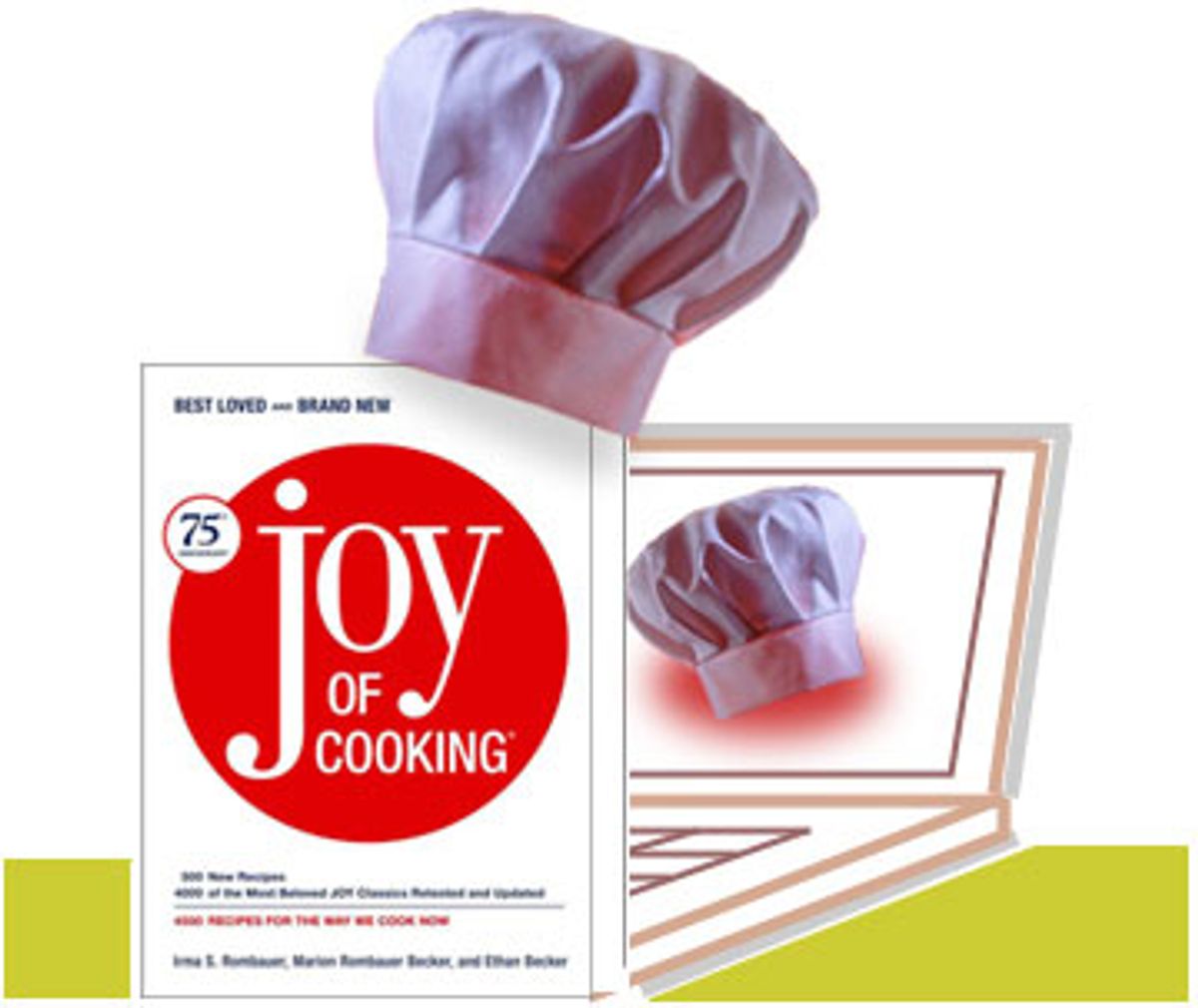 One of the bigger publishing events of the fall of 2006 was the publication of the new 75th anniversary edition of "Joy of Cooking." Upon the book's release, most coverage focused on how "Joy" reflects or does not reflect changing dining tastes. "Joy" fans were interested to see what stayed in the new edition, and what got cut, but for the rest of the publishing world, the more immediate question was "why"? In the age of Google, who needs another paper-and-ink tome taking up space in their kitchen? Other classic reference works have gone online, and are not coming back. This past holiday season, more than one bookseller promoted the unabridged, 20-volume, 151-pound Oxford English Dictionary as a very special holiday gift -- at 70 percent off the list price. If you want one, act now, because Oxford won't be printing any more. At one volume and 3.75 pounds, Joy is leaner than the OED, but certainly suitable for use as a doorstop. And in the heavyweight class, even "Joy" is surpassed by the 816-page 4.51-pound "Bon Appetit Cookbook." The two behemoths (quite literally) anchored holiday cookbook displays in countless bookstores.

The market "Joy" entered is far from deserted; indeed, if you judge by utility, there are probably more inessential titles in the world of cookbooks than in any other branch of publishing. Even setting aside star chefs' cookbooks that rehash classics in the service of brand extension, no matter how narrow the cookbook category, chances are you have the luxury of choice -- this winter, hot on the heels of Molly Stevens' Beard Award-winning "All About Braising" came Daniel Boulud's "Braise: A Journey Through International Cuisine."

But how many braising cookbooks, or even cupcake cookbooks, does one cook need? How many cookbooks at all? With the proliferation of clearinghouse Web sites like Epicurious.com, not to mention the enormous number of food blogs that spring up daily, any recipe you can think of is no farther away than the nearest computer. If, as of Sunday, Feb. 25, Epicurious.com serves up nine recipes for "Yorkshire pudding," and Allrecipes.com has 43 for "black bean soup," and Googling "vichyssoise" generates 265,000 results, who needs an all-purpose cookbook like "Joy" with only one or two recipes for each of these dishes?

The answer? You do. Over the first seven decades following its birth in 1931, "Joy" was valuable to the degree it was comprehensive. One could give it to a newly married couple, and feel that they would be ready to meet most culinary challenges of the day. As the shape and size of the culinary world changed, so did the scope of "Joy" -- and there have been missteps that are hard to avoid when managing a franchise over decades and generations. Still, however much cultural evolution might change what we want or expect from such books, it is a technological revolution that has changed their role most profoundly. In the age of the Internet, the value of "Joy" -- or books like it -- lies not with what they include, but in what they exclude. For the cook who wants to make a familiar dish, or who is faced with a new ingredient, the current problem is not a lack of recipes, but a surfeit of them.

Imagine that an in-law asks you to bring succotash to a family feast -- do you make the version from Cooks.com, or perhaps the one from Teri's Kitchen? Wikipedia's Wikibooks Cookbook has a succotash recipe that offers several variations, and also links to a recipe from a digitized version of "Recipes Tried and True by Presbyterian Ladies Aid." Or imagine that weekend guests show up at your house with a haunch of venison -- and the expectation that you'll be cooking it for them. (This would be a rude guest, of course, but the same principle applies if a gardening neighbor dumps a bushel of rainbow chard on you.)

Faced with an unfamiliar ingredient, or even inflamed with a sudden desire to make popovers, you could turn to the computer and find 804,000 results from Google for "venison + recipe," and close to a quarter-million hits for "popovers." You could read through several recipes for the same dish and get a general approximation of what to do, but that approach works better for something like blue cheese dressing than for, say, bread, where cooking times and proportions are critical. Also, the kind of cooks who are comfortable reading a few different recipes and winging it might well be the kind of cooks who will trust their instincts and not bother with consulting a recipe database online in the first place.

All of this suggests that ink-and-paper cookbooks will survive the recipe database and the food blog explosion. This is good news, but should not be surprising. A good cookbook is more than a collection of recipes. The ones I cherish -- Judy Rodgers' "Zuni Cafe Cookbook" and Fergus Henderson's "The Whole Beast" come to mind -- offer a comprehensive approach to thinking about food from a distinct perspective. Even in the realm of general cookbooks, there are personalities. A blurb on the jacket of my edition of Mark Bittman's "How to Cook Everything" plugs it as "A more hip Joy of Cooking." Bittman's book does not quite conjure images of Irma Rombauer bopping around the kitchen listening to Lily Allen, but the sentiment is reasonable -- Bittman's outlook is certainly less down-home than "Joy's."

At the same time, one of the unsung virtues of print cookbooks is that they do not change. When tiramisu and flourless chocolate cake lose their novelty, you can still rely on Fannie Farmer's "Boston Cooking-School Cook Book" for your grandmother's favorite cake recipe. Beyond their devotion to the same editions of the same books, witnessed by the market for reissues of the original "Joy of Cooking" and the "Boston Cooking School Cook Book," many chefs have an attachment to the same copies of the same books. A particular copy of a particular cookbook provides a lasting physical link between a cook, or generations of cooks, and the meals they feed their families and friends. Many of my favorite cookbooks open naturally to my favorite recipes, because those are the pages that are splashed and stained from duty on the counter, propped open with a pot lid. Better still, a conscientious cook will produce the kind of annotations you won't find online. When I'm home for the holidays, I like to thumb through the blue "New York Times Cookbook" that remains the cornerstone of my mother's kitchen. Her annotations are as interesting as the recipes themselves, not just for what they say about the recipes, but also for what they say about her. A little bit of math reveals that she was cooking dishes like veal Marengo for us on weeknights, while teaching high school, and with a 4- and a 10-year-old underfoot. None of the 22,600 hits for "veal Marengo" on Google would tell me that.

The success of the new "Joy" suggests that entering (your ingredient or dish here) + recipe into a search engine is for the brave man or woman with lots of free time. The materiality of cooking and the immateriality of the Internet make for an uneasy pair. In the ether, Web sites can be devoted to things like selling portraits of yourself with Stevie Nicks, or to people who look kind of like Kenny Rogers, and the only thing it costs you is a moment of your (boss's) time. But when these concerns translate into real ingredients, and actual temperatures or techniques, your time, your money and, most of all, your meals are at stake. If you heed the advice of some stranger to marinate flank steak in Sunny Delight, you are, quite literally, on your own. With "Joy," you have the safe feeling of being under the watchful eye of a septuagenarian.

Jonathan Beecher Field is an assistant professor of English literature at Clemson University. By day, he writes about print culture in colonial New England.