Veterans groups told the Army surgeon general about the shockingly bad mental health treatment at Walter Reed two months before the latest expose, but there's no evidence he followed up. 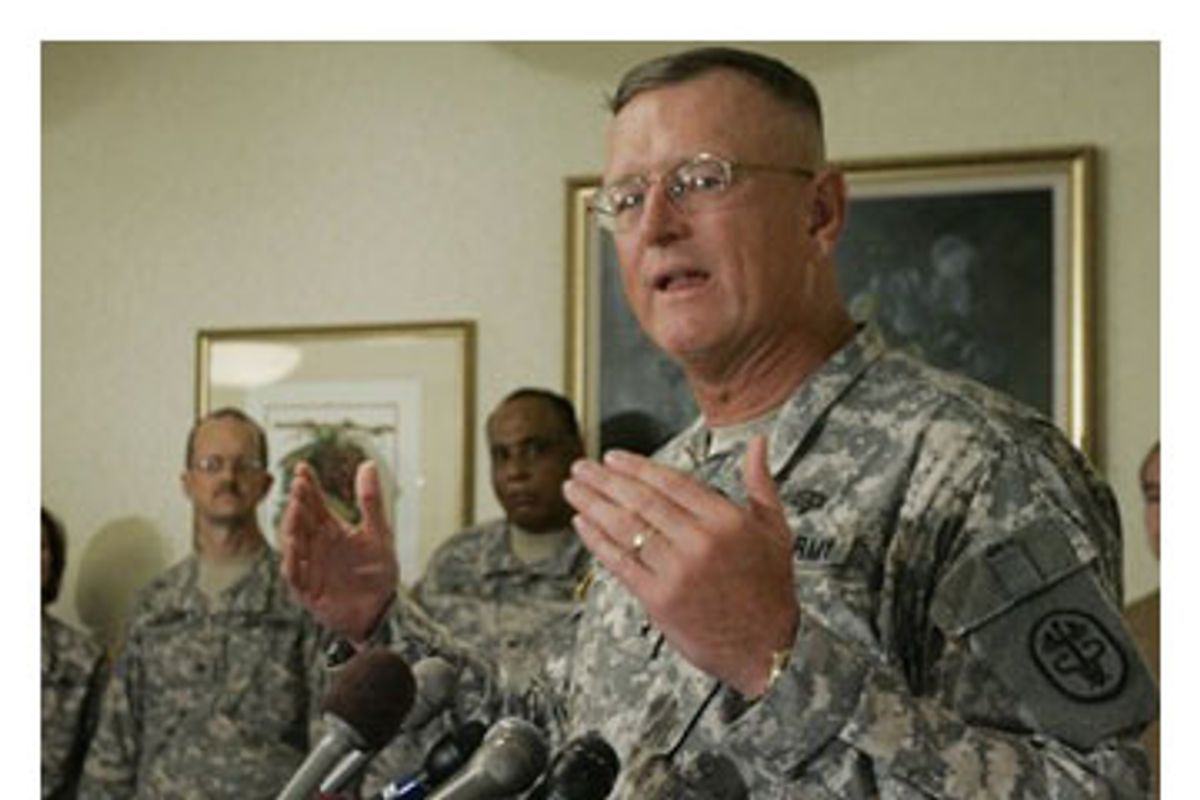 Though he has since dodged the question in a television interview, the officer in charge of medical care for the U.S. Army was told more than two months ago that the Army's outpatient medical care program was dysfunctional, yet he apparently took no action in response. The Army's outpatient services include the substandard treatment at Walter Reed Army Medical Center that has been the subject of a number of recent articles in the Washington Post and a series of stories in Salon in 2005.

At a meeting last Dec. 20, a group of veterans advocates informed Lt. Gen. Kevin Kiley, former commander of Walter Reed Army Medical Center and now the Army surgeon general, that soldiers returning from Iraq were routinely struggling for outpatient treatment and getting tangled in the military's byzantine disability compensation system -- and that their families were suffering along with them.

"We are here to tell you that our soldiers and our veterans, and some of their families, are falling through the cracks," Steve Robinson, director of veterans affairs at Veterans for America, told Kiley at a meeting of the Department of Defense Health Board Task Force on Mental Health. Kiley co-chairs the panel, which was created by Congress to probe military mental-healthcare capabilities. "Hundreds and potentially thousands of soldiers are facing barriers to mental healthcare," said Robinson, "and are facing improper discharges" because of the Army's complex discharge and compensation system.

Robinson also warned Kiley, who ran Walter Reed from 2002 through 2004 and still has responsibility for it as Army surgeon general, that the scandalous situation threatened to become a media firestorm. "If we identify something," said Robinson, "we would much rather bring it to the chain of command than see it reported in [CBS'] '60 Minutes.'"

Kiley called the veterans' remarks "very important testimony," and allowed speakers to go beyond their allotted time limits, but there's no evidence that he has followed up. Since the Post stories broke, Kiley has mostly insisted that the outpatient problems are confined to poor building maintenance, and has denied any evidence of poor healthcare treatment.

Kiley's office did not respond to an e-mail asking him to discuss what steps he may have taken to address the shortfalls described to him last December. Robinson, from Veterans for America and a retired Army Ranger, said Kiley should have acted after that briefing. "I took this as an opportunity to testify before Kiley and put on the record that we knew what was going on and we wanted him to do something about it," Robinson said in a telephone interview. "It was that the system was broke."

Georg-Andreas Pogany, who is a retired Army sgt. 1st class, gave Kiley a similarly stern admonition at the December meeting. Pogany advised Kiley that for outpatient mental-healthcare treatment, there were "barriers to treatment on the ground, in the companies, at the battalion level, and in the barracks." Pogany said he had been frustrated while trying to help soldiers extract proper treatment compensation from the Army for their disabilities, a bureaucratic process that can take months or years. "After careful and thorough review of each soldier's medical and military service record, I am faced with the sobering reality of the enormous gaps in the systems of services and safeguards to prevent service members from falling through the cracks."

In a telephone interview, Pogany said these kinds of healthcare failures have been evident in the military throughout the war. "This is something Kiley should have taken care of some time ago," Pogany said. "Soldiers that are in the medical process are being treated as a disposable commodity."

Yet on Wednesday, Feb. 21, when both Steve Robinson and Lt. Gen. Kiley appeared on PBS television's "NewsHour," Kiley wouldn't give a direct answer to interviewer Judy Woodruff when she asked what he knew and when he knew it.

WOODRUFF: General Kiley, you just heard Mr. Robinson saying he met with you, he met with others in your office, and, yet, the officials were saying today that they didn't know this was going on. Can you square that for us?

LT. GEN. KEVIN KILEY: Well, you've got to look at the timelines and what we meant. I don't disagree with Mr. Robinson that the challenges that the leadership at Walter Reed have had -- frankly, since I took command in 2002 -- in support of the global war on terrorism and taking care of soldiers has required us to continually reevaluate how we care for soldiers, how we process the MEB-PEB process, the medical boarding process.

Kiley goes on to say, "This is a very complex set of problems, because the soldiers have got complex issues, mental, emotional, and physical."

The very next day, however, Kiley told assembled press at Walter Reed, "I guarantee you that the healthcare here is of the very highest order and has been. The issues ... have been about the quality of life, specifically some of the issues in Building 18, and then the bureaucracy, which is not a function of letting soldiers languish. We're not letting soldiers languish ... Those great, young Americans deserve nothing but the very best healthcare, which I believe they're getting."

The heads-up that Kiley received in December focused on troops' neglected psychological wounds, including post-traumatic stress disorder. In vivid language and detail, the advocates depicted a widespread breakdown in which soldiers were unable to get adequate outpatient mental healthcare and were getting bogged down -- and sometimes treated unfairly -- in the complex compensation system that is supposed to remunerate them for their injuries. Those failures, Kiley was told, were stranding some soldiers with what can be life-threatening conditions without proper treatment or fair compensation. According to the presentations that day, these shortcomings are spread sporadically throughout the military healthcare system, as opposed to showing up as an isolated scourge at a place like Walter Reed.

Top Pentagon officials so far have mostly reacted with shock, professing ignorance of the problems prior to the Washington Post articles. "This news caught me -- as it did many other people -- completely by surprise," Assistant Secretary of Defense for Health Affairs Dr. William Winkenwerder Jr. said at a press conference on Feb. 21. Winkenwerder, Kiley's superior, also suggested that the foul-ups were not healthcare issues, calling the problems at Walter Reed "quality of life experience" shortfalls. (The White House announced plans to replace Winkenwerder the next day, Feb. 22, for what was described as a previously planned departure.)

If Kiley has not done much to address the problems he heard about last December, it would stand in stark contrast to the outrage other Army officials have articulated since they learned about problems at Walter Reed. "This is too important and cannot wait for a report to be finished or a review to be completed," Army Secretary Francis Harvey said in a statement last week. "We'll fix as we go. We'll fix as we find things wrong."