Market turmoil: Should we blame Greenspan or China?

When Shanghai sneezed, did the world's markets get the bird flu? Or was Tuesday's "correction" all the Maestro's fault? 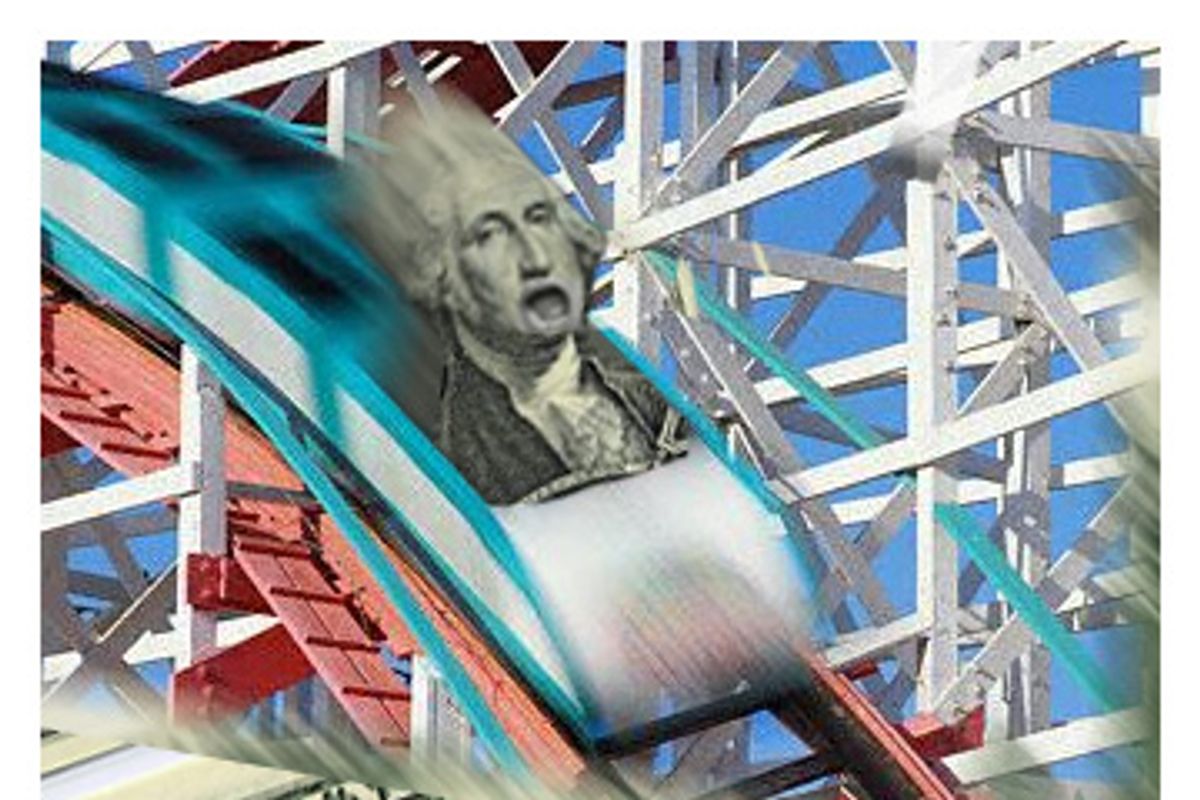 A big stock market break is like a Rorschach test for the economically minded. If you are, for example, an economist who has been predicting that a hard rain is gonna fail for the past year, then a 400-point drop in the New York Stock Exchange is just the latest opportunity for you to marshal all your grimmest economic indicators, and say, see, I told you so. But if you are someone who has been pooh-poohing the tendency of sensationalist financial journalists to interpret every negative blip in the economy as sure proof of imminent Armageddon, the same market swoon is merely proof that what goes up must go down. Investors have suddenly decided they are no longer so hungry for risk -- that's totally normal, not to mention healthy!

So one woman's crash is another man's correction -- and the prudent observer might wait a week or two to see where things are really heading before making a definitive pronouncement. Ah, but there's the tricky part. Markets can't wait. The New York Stock Exchange will open again on Wednesday morning, and traders will have to put their money on the line, bearing, as they often do, the awesome power to create their own reality. If enough hedge funds, pension funds, mutual funds and individual investors decide that the day after a big break is a prime opportunity to pick up some shares on the cheap, by their own enthusiasm they will give the market new life. But if they spend the night watching the carnage that is racking stock exchanges all across Asia (except, oddly, in Shanghai, where this whole mess may have started, and where the market, as of about 10 p.m. Pacific Standard Time, was up about 2 percent) and become convinced that another bad day is looming, then their lemming-like decisions to sell will create a self-fulfilling prophecy.

Such is the eternal Catch-22 of the markets -- but that is also precisely why market breaks are taken so seriously. Because while it is entirely possible that Tuesday's events will not be significant in the long term -- that global economic health is strong, that even a severe correction is only the natural, expected reaction to such a long, sustained rise -- it is equally true that at some point bull markets do become bear markets. Peaks do get reached, declines do start -- and this may be one -- especially if we convince ourselves of that truth.

Which makes the stories that are already being told to explain why what happened so interesting. Everyone on Wall Street knows that being able tell a good story is at least half the battle. A compelling story is a reality-warping machine. If we all believe that the price of copper is going to rise because China's manufacturing economy has a voracious appetite for copper, then our eagerness to buy copper futures ensures that the price does rise, irrespective, for some period of time, of whether China's maw really is insatiable.

When a market breaks, the game starts: Who can best explain it? My two favorite stories so far: the Maestro, and the China Syndrome.

The Maestro theory is that when Alan Greenspan mentioned, on Monday, in the mildest of ways, that there might, just possibly, maybe, maybe, maybe, be a recession looming sometime in the not-too-distant (but also not-too-near) future, everyone from Shanghai to New York freaked out. There's a tautological aspect to this theory that is impossible to unravel. Obviously, if the market hadn't crashed, Greenspan's pronouncement wouldn't have had such power. But it did, so he rules. Greg Ip has the definitive Greenspan article up at the Wall Street Journal (accessible, I think, to the general public).

Greenspan didn't say a recession was likely. Indeed, he said most forecasters don't see one, the global environment is "benign" and there has been no "significant spillover" from the contraction in housing activity. His comments appeared more aimed at questioning the conviction of many investors that because each of the last two expansions lasted a decade, this one, now five years old, will, too.

But the perceived pessimism of the remarks grew as headlines made their way around trading rooms and were blamed for helping contribute to a two-day, world-wide selloff in stocks, a plunge in bond yields as bond prices rallied, and increased market expectations of a cut in interest rates by the Fed.

If I were Ben Bernanke, the current Fed chief, I'd be pissed off. The last thing you want is your predecessor making speeches in Hong Kong that send markets all over the world into a frenzy. Already, some economists are declaring that the Fed must now ease interest rates at its next meeting, so as to give a cratering economy a shot of steroids. If true, that means that Greenspan is still quite able to set monetary policy, retired or no.

But really -- we give the man too much credit. Without the Chinese stock market sell-off on Tuesday, without the unexpectedly large decline in durable-goods orders, without the ongoing turmoil in the subprime lending market, without the recent rise in crude oil prices, without the geopolitical worries in Iraq and Iran and Afghanistan, would Greenspan's declaration have moved the markets? Isn't it just as feasible that his mild pessimism touched a chord with what many traders were already feeling? Enough with the Great Man Greenspan theory of economic history. Let's move to China.

By the end of Wednesday the standard news report on the market break in the U.S. declared that it had been triggered by a massive sell-off in the Shanghai market. For some analysts, the worry was that the Shanghai meltdown might augur a pop in the Chinese bubble -- and if the Chinese economy goes awry, that could well have negative implications for the entire global economy.

But why the panicked selling in China? It certainly wasn't because of anything Greenspan said. Most news reports are declaring that it was the result of rumors about potential policy initiatives that the Chinese leadership might soon enact to cool off an economy that is growing too fast. Whether Premier Wen Jiabao is about to announce interest rate hikes or a capital gains tax is impossible to say, but what we do know is that the leadership is very concerned with attempting to rein in China's reckless growth. And that's probably a good thing for everyone.

So when Shanghai sneezes, the world's markets catch the bird flu? True or not, the fact that this story is even being told is testament to how far and how fast China has come. It's instructive to think back 10 years, to the Asian financial crisis of 1997. China managed to keep itself relatively immune from the devastation that ransacked its neighbors, in part because of its iron grip on its own currency, and possibly because it was less well integrated into the global economy than the rest of the region. Ten years later, it's China that's shaking up the status quo, with a little help from the United States. From that vantage point, the fact that on Wednesday the Shanghai stock exchange, so far, is keeping its cool could well be the single most significant data point in all the market madness racing around the globe over the past 24 hours.

There are other stories to be told. Some of them are even now influencing some of what will happen on Wednesday. Some, by necessity, will have to adapt to what does happen. And in some future economic history, the week that started with what the Chinese are calling "Black Tuesday" may be remembered as a key turning point, or it might not be remembered at all -- just another zig, lost among the zags.