No need to choose sides, says author Jennifer Baumgardner in her new book extolling bisexuality. Speaking from experience, she says the sex is good, the politics even better. 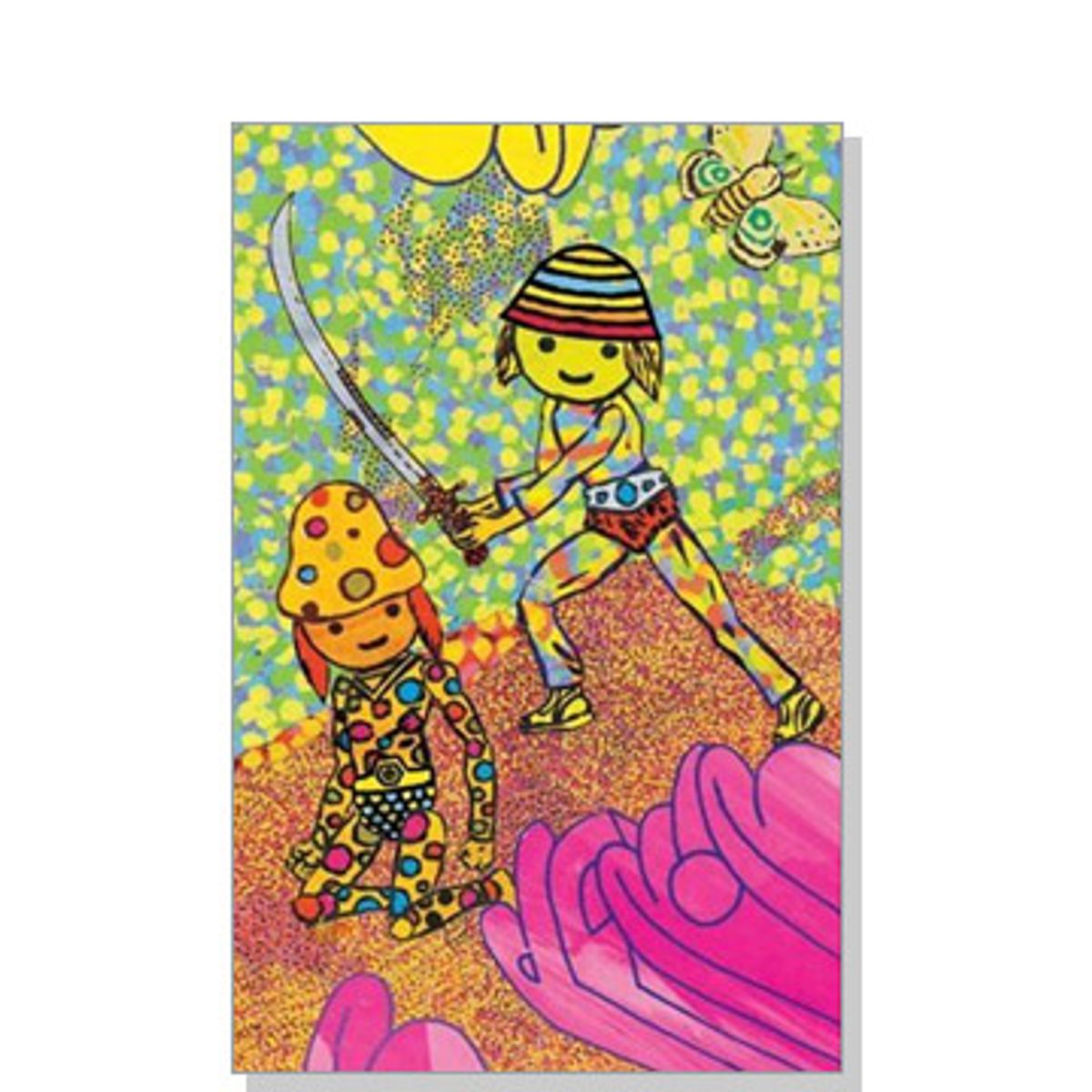 When Jennifer Baumgardner came out as bisexual, her mother wasn't quite sure what to make of it. "The only bisexual I can think of is ... Elton John," she said. The year was 1994 -- before Anne Heche pronounced Ellen DeGeneres her "wife," before girl-on-girl dabbling became a prime-time cliché. Today, whopping numbers of young women check "either" on their Nerve.com profiles. And if they choose to tell their moms about it, even the suburban soap fans among them will likely have a vivid frame of reference.

Baumgardner is pleased by this mainstream visibility but still troubled by the popular image of bisexuality. She resents the tired assumptions: "Bi's" are really straight -- and experimenting for attention or leftist cred -- or else gay with only one foot out of the closet. These stereotypes, it must be said, are not entirely without basis: The Madonna/Britney kiss, for example, was unabashedly for show, and even Elton John concluded that he was, on second thought, just gay. But Baumgardner is right that many of us are genuinely attracted to both sexes -- and that the pressure in both the gay and straight worlds to identify as either/or is a hazard to psychosexual health.

In "Look Both Ways: Bisexual Politics," Baumgardner sets out to rehabilitate her beleaguered sexual orientation. Extolling the benefits of bisexuality for women (the book focuses exclusively on females), she argues that an ecumenical approach to love is not only personally, but also politically, rewarding. She credits her experiences of loving both genders with teaching her how sexism infects relationships, and how to begin to purge it. This feminist case for bisexuality is provocative, but ultimately poses as many problems as it solves.

Previously co-author (with Amy Richards) of two feminist books, "Manifesta" and "Grassroots," Baumgardner grew up straight and unsuspecting in the Midwest. Post-college, she worked at Ms. magazine, had an affair with her colleague Anastasia, and has since alternated between male and female lovers. Her love life constitutes much of the research for this book.

With Anastasia, Baumgardner enjoyed an intimacy and egalitarianism that had previously eluded her -- not to mention better sex, which she chalks up to increased comfort. "I experienced things I'd never associated with relationships before," she writes. "Things like baking Syrian bread together ... Things like orgasms." The relationship wasn't perfect: She sometimes felt competitive with Anastasia and contemptuous of her borderline-doormat ways. But she attributed their problems in part to her own misogyny and homophobia, and believed that persisting in Sapphism could help her quash those insidious forces.

Given the satisfaction she found with a female lover, it's a wonder Baumgardner didn't complete the transition to a full-blown Kinsey 6. But she sees no need to limit her options. Men are still alluring, in part because of their power in our society, Baumgardner admits, and she likes the frisson that comes from difference. What's more, she believes that the main obstacle to satisfaction in heterosexual relationships is, again, sexism. Instead of retreating from men, which she thinks would be a cop-out, she hopes to apply the lessons learned in same-sex love -- how to achieve autonomy and intimacy -- to the heterosexual variety.

After Anastasia, Baumgardner dated Steven, a Scottish journalist who was sporadically perfect but moody and commitment-averse. Indeed, it sounds as if at that point her theory was pretty much a bust in practice: For most of their relationship, she felt powerless and frustrated. Eventually, she left him for a woman, Amy Ray, half of the Indigo Girls, whom Baumgardner met on assignment for Ms. A butch lesbian, Ray had the attractions of male privilege: "lots of money and respect, plus she could play guitar." But she also offered the cozy assurances that Baumgardner associates with women; they ended every phone conversation with "I love you."

Next came another man, Gordon, the father of Baumgardner's baby son. We don't hear much about Gordon, although she does report some small victories: At least she was able to drag him to the Seneca Falls Museum, a feminist landmark. But they were destined not to cohabit, essentially because he was a slob, a flaw she seems to consider endemic to the male sex.

Reading her history, what's striking is that she seems to have sought out -- only to be disappointed by -- males who were in certain ways rather stereotypical. After all, some straight men are emotionally literate, willing to commit, and more neurotic about cleanliness than their girlfriends are. It seems likely that what attracts Baumgardner to typically masculine men -- their otherness and mystery -- at once precludes the intimacy she craves. But the relevant distinction is not necessarily male vs. female. It's enigmatic and different (more appropriate for crush or fling material) vs. emotionally accessible and simpatico (more conducive to serious relationships, and despite her past experience, not always gender-dependent). In terms of her frustrations, Baumgardner's taste in men may be to blame as much as the patriarchy.

Apart from this curious blind spot, Baumgardner is generally thoughtful and honest, with a refreshing sense of humor about herself and her politics. Some of her disclosures are bravely taboo: She admits that she, well, likes heterosexual privilege. In fact, she has a high opinion of entitlement in general. Bisexuals, she argues, have been crucial conduits in advancing the lesbian-bisexual-gay-transgender agenda, largely because their taste of straight experience leads them to demand the same privilege when in same-sex relationships. (Without Anne Heche's cluelessness about homophobia, she points out, Ellen might not have come out so extravagantly.)

Baumgardner's prose, at its best, is warm, unpretentious and funny, although it's occasionally breezy to the point of sloppiness. And as a memoirist, she is impressively willing to make herself vulnerable. Far from an exhibitionistic tell-all, the book includes disarmingly unsexy confessions. For example, she describes herself as "highly repressed," attributing her orgasm difficulties with men to a fear of embarrassment.

In addition to mining her own experiences, Baumgardner interviewed many other women, including some older feminists. A certain contingent of the Second Wave generation, she reminds us, promoted lesbianism for political reasons: The "woman-identified woman" put women first in every area of her life. Ideological purity was paramount; "sleeping with the enemy" was scorned. Baumgardner recognizes the dramatically different context of the era, but criticizes a movement ostensibly devoted to the full development of women for trying to legislate sexuality.

Her arguments for sexual complexity and openness are compelling, as are her claims that bisexual experiences can supply a kind of stereoscopic vision. But I'm skeptical that bisexuality, as a broader feminist prescription, is either as necessary or as sufficient as she claims. After all, lots of straight women have "gay expectations" from relationships, which some men fulfill, while ovaries are no guarantee of a capacity for intimacy. Ironically, the trouble with her feminist argument is that it relies too heavily on gender stereotypes. Certainly, gender is an important factor in the dynamics of relationships, but so are education, class, attractiveness, number of years spent in therapy, how much your mother loved you, and countless idiosyncrasies.

Baumgardner observed in Second Wave feminism the pitfalls of politicizing sex, but at times she runs the risk of repeating that mistake. To be fair, her counsel is not to force any relationship or sexual orientation. Rather, she's urging a receptivity, a rejection of limits. Still, there's a fine line between praising the incidental fruits of certain kinds of relationships and advancing a utilitarian approach to sexuality. In her manifesto, Baumgardner sometimes seems to be promoting relationships as learning experiences, as means rather than ends. Or, looked at a different way, she may be committing almost the opposite error: devising a feminist brief to endorse her natural desires.

Baumgardner's enthusiasm for bisexuality occasionally leads her to see it where it doesn't exist. For example, she refers to a "blithely actualized bisexuality" in Denise Lambert, a character in Jonathan Franzen's "The Corrections," asserting that Denise's female lover and her lover's husband (with whom Denise also has a flirtation) were both key to her sexual awakening. But it's the unprecedentedly lusty affair with Robin that really changes Denise's life. By the end of the book, she exclusively pursues women and pointedly tells her mother she will never marry again. Her past heterosexual life resulted from a misunderstanding, and it seems safe to say that even the reasons enumerated in "Look Both Ways" wouldn't persuade her to look back.