This tale of a real-life murderer known as the Zodiac killer is one director's shot at making the ultimate serial-killer movie. 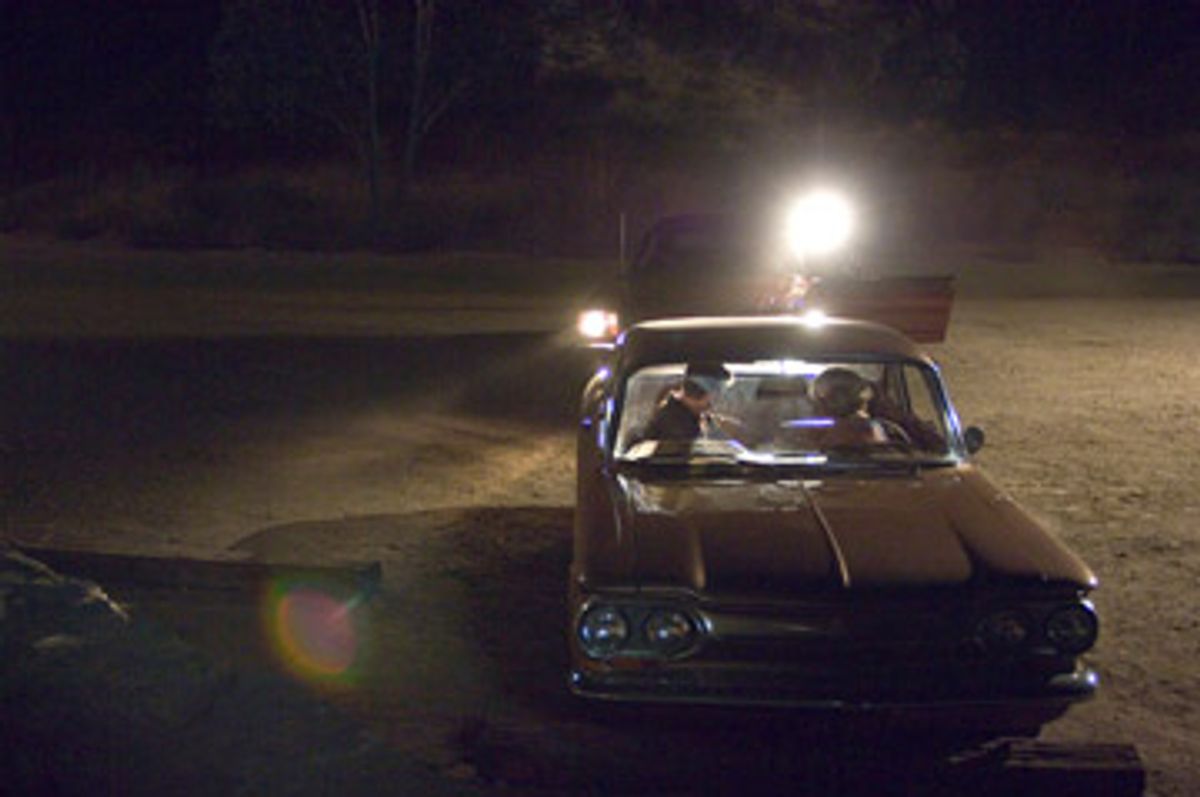 David Fincher, who grew up in Marin County in the '60s and '70s, has called the Zodiac killer -- who terrorized the San Francisco Bay Area in those years -- "the ultimate bogeyman." "Zodiac," Fincher's obsessively manicured account of the murders and the subsequent investigation -- the case has never been definitively solved -- is clearly the director's attempt at making the ultimate serial-killer movie, a labyrinthine study that pokes into some very dark corners of dread, suspense, madness and frustration.

Instead of picking through the details and dramatizing the most significant ones, Fincher lays them all out for us in a meticulously crosshatched engraving: Bits of the picture are fascinating to look at, but eventually, exhaustion kicks in, to the point where we're not sure what we're looking at, or why. And Fincher can't stop himself from portraying the murders (in one case, in extremely graphic detail), as if addressing them more obliquely might possibly dilute their horror -- as if their horror could be diluted. His approach, and his coldness, may be some kind of point-of-pride demonstration of artistic objectivity. But is there any such thing as an objective artist? And if so, do we want, or need, one?

Fincher opens the picture with a carefully plotted sequence that establishes the picture's disquieting mood: A nice-looking young woman and a guy who comes off as sweetly shy -- we later learn that their names are Darlene Ferrin and Mike Mageau, and they're played by Ciara Hughes and Lee Norris -- drive to a golf course parking lot one evening, ostensibly to sit in the car and talk. Darlene, who's behind the wheel, is visibly nervous, and when Mike asks her why, she deflects the question. But he notices that a dark car, driven, it seems, by someone Darlene knows, has been trailing the couple. The car stops behind them, and a figure steps out, shining a flashlight, cops-in-lover's-lane style, into their faces. They can't see -- and neither can we -- that the flashlight is strapped to a weapon. The bullets riddle the couple's bodies, and Fincher shows the spasms and blood spurts in fetishized detail. The mysterious figure walks away, only to come back when he realizes he hasn't finished the job, unloading more bullets into these already limp bodies.

It's less an opening sequence than an assault and seizure. And I'd be more willing to accept its effectiveness if Fincher didn't try to top it later, with a stabbing sequence in which we see a knife, at close range, being plunged repeatedly into a man's back as his hogtied girlfriend watches in horror next to him, and then her body twitching as she, too, is knifed.

If Fincher were merely going for sensationalism, you could at least chalk his tactics up to honest sleaze. But Fincher wants sensationalism and class, too, seemingly unaware that you can't have both. And through the rest of "Zodiac," Fincher amasses details with so much zeal that he barely bothers to stop to notice their significance, or lack thereof.

Jake Gyllenhaal plays Robert Graysmith, the former San Francisco Chronicle political cartoonist who went on to write two books about the Zodiac killer (on which the movie is partially based; the screenwriter is James Vanderbilt). Graysmith, Chronicle reporter Paul Avery (Robert Downey Jr.) and their colleagues at the paper become drawn into the case when the Zodiac sends a letter, along with an encrypted note, to the Chronicle offices demanding that the missives be published, or else he'd launch an even bigger killing spree. (He will later threaten to shoot out the tires of a school bus and then "pick off the kiddies as they come bouncing out.") The third and fourth major players in the investigation are police inspectors William Armstrong (Anthony Edwards) and David Toschi (Mark Ruffalo), the latter of whom, in particular, becomes rattled by the way the Chronicle employees nose their way into the case.

Fincher is telling a complicated story here, one that spans more than 30 years: The Zodiac committed his first murders in 1969 (he publicly claimed 13 victims, although the exact number may never be known) and was never caught, although the movie makes a strong case for the killer's identity, as Graysmith's books do. That dim, flickering light bulb of uncertainty adds an extra layer of creepiness to the Zodiac story. And to Fincher's credit, he does sustain a murky mood of dread, even beyond the movie's two-and-a-half-hour runtime: I left the theater feeling vaguely ill, complicit in the spectacle I'd just witnessed and wondering if, just if, the killer might still be out there.

But "Zodiac" didn't make me feel as if I'd been in the grip of a master -- only in the grip of a brash filmmaker with a sadistic streak. The picture is a mere hopscotch-jump away from Fincher's much-adored 1995 "Se7en": When he talks, in interviews, about how the Zodiac case gripped him as a kid, he's obviously not kidding. Like "Se7en," this is a story in which the hunted destroys the hunter: The Zodiac case unravels the lives of the people who try to crack it, or at least frays them at the seams. But unlike "Se7en" -- and unlike Fincher's other fanboy favorite, the absurd "take back the might" macho-apologist and faux-Marxist "Fight Club" -- "Zodiac" at least resembles a real movie, as opposed to a stunt. The picture, shot by Harris Savides ("Elephant"), is muted and gloomy, in characteristically Fincher fashion, but it doesn't look as if it's been scratched up with a bent paper clip after the fact: It has a somewhat more straightforward, classical feel than Fincher's other pictures do.

But particularly considering how passionate Fincher is about telling this particular story, "Zodiac" should add up to more than it does. Fincher went to a lot of trouble here, including hiring his own expert in forensic linguistics to see if any new light could be shed on the case. But his exceedingly elaborate picture is also sometimes surprisingly careless: Early on, we learn that Graysmith, a divorced single dad, has two young kids, but we see only one. (Later, when he's found a new girlfriend, Melanie -- played by Chloë Sevigny, who adds some much-needed sparks of life to the movie -- we see three kids at the dinner table, one of whom belongs to Graysmith and Melanie. The phantom second kid from the first marriage can, apparently, be conjured at will.) And Fincher shows how one of the Zodiac's intended victims escapes alive -- she's one of the few survivors who have actually seen his face. We see newspaper accounts about her, but we never see her being questioned, a detail that could have at least been wrapped up in a line of dialogue.

Those might seem like minor quibbles. But are they so minor in a movie in which a vintage '70s-era Chronicle newsroom was re-created in loving detail, reportedly right down to the Chronicle-logo pads and pencils nestled in the desk drawers? That sounds a bit like Michael Cimino's bewitched undie fixation during the making of "Heaven's Gate": He insisted the underwear folded in the characters' dresser drawers be authentically period, even though these unmentionables were never seen, nor even mentioned, on-screen.

Directors often say they insist on those kinds of details to help the actors build their characters. But a movie loaded with such bits and bobs is more often just a highly decorated palace in which a director's king-size ego might dwell. Fincher may be stylish, but he's not an actor's director. In his quest for perfection on "Zodiac," Fincher in some cases shot as many as 70 takes, looking to get just the right something from his actors. If a director needs 70 takes, what he's looking for either doesn't exist or won't be visible to anyone but him.

Miraculously, all the performances here achieve at least a base level of proficiency: Downey, playing an exceedingly bright reporter undone by drink and drugs, is a wonderfully casual and relaxed presence in the midst of Fincher's excessive orchestration, and Ruffalo adds layers of interesting shading to the principled, frustrated cop he's playing.

But Gyllenhaal, normally a surefooted actor, at times looks a bit wobbly, as if he's lost his place in the plot. Actors aren't the biggest part of Fincher's plan, and maybe that's not supposed to matter, anyway: The movie isn't really about these characters, struggling to solve a series of bizarre, grisly crimes; nor is it even about the killer himself. "Zodiac" is all about Fincher's personal enthusiasms and obsessions. It takes a mighty big ego to steal the show from a serial killer. Apparently, Fincher's just the guy for the job.