Walter Reed, on the cheap

The Pentagon's top civilian official in charge of military healthcare wanted more money for bullets and bombs, and fewer benefits for soldiers. 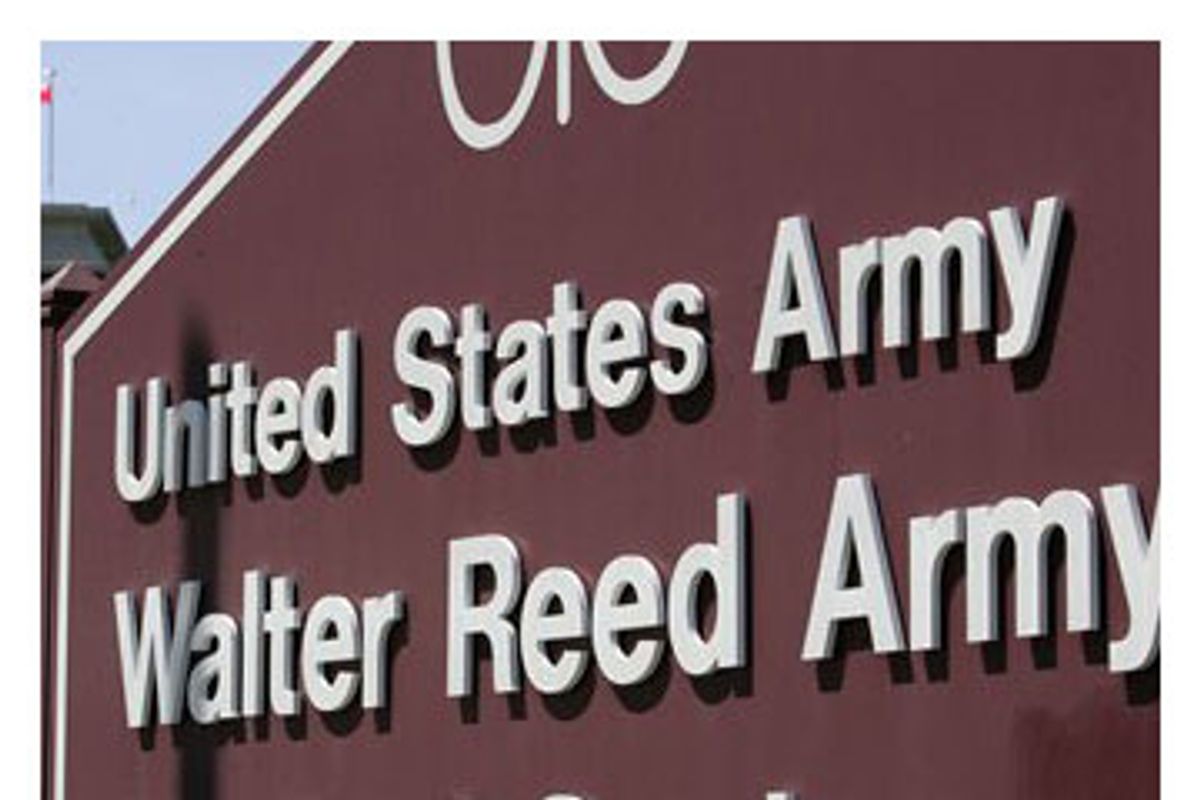 It is now becoming more widely known that for years some soldiers returning from the wars in Iraq and Afghanistan have suffered neglect and poor care at Walter Reed Army Medical Center. As the military health care system has become increasingly burdened with returning veterans, some patients have also been ground down by the complex bureaucracy that is supposed to pay them disability for their wounds. Even more disturbing, some soldiers and veterans' advocates say, is mounting evidence that these problems extend far beyond the well-known military hospital in Washington, festering in varying degrees at military posts throughout the country.

The commander at Walter Reed and the secretary of the Army lost their jobs last week, after renewed media focus on the deficiencies in handling outpatients at Walter Reed set off an uproar in Washington. But the spotlight is about to shift to civilian leaders inside the Pentagon -- and while they are lower-profile characters in the Walter Reed drama thus far, their critics say they bear primary responsibility for the problems.

Now, Congress is demanding more answers about why money was not spent to hire more doctors, case workers and psychologists to treat outpatient soldiers at Walter Reed. Questions are also swirling about why the military has apparently done nothing to fix what veterans' advocates say is a nightmarish bureaucracy for disability payments, one that leaves vets sitting around for months, sometimes even years, not knowing if they'll be taken care of for the longer term.

Critics say that Chu and Winkenwerder had the wrong priorities, focusing on cutting costs while greater numbers of returning soldiers struggled against an increasingly strained military health care system. Both men know how to manage costs: Chu is an economist and mathematician who once worked in an Army comptroller office. And Winkenwerder is a former health insurance industry executive.

But their résumés also point to the problem, according to their detractors. "The military tried to run military health care on the cheap -- like an HMO," said Paul Sullivan, who until March 2006 was a project manager at the Department of Veterans Affairs in charge of data on returning veterans. "And the consequences are the medical catastrophe and the bureaucratic nightmare that we see right now."

Several retired generals who worked close to Chu and Winkenwerder were similarly critical of their management approach. One retired general who worked in the Army's medical command and requested anonymity wrote in an e-mail that Chu is "an economist who has looked at military healthcare primarily from the view of the cost impact." That retired general also wrote that "Bill Winkenwerder has not anticipated the problems we are seeing now."

The Pentagon maintains that the two have proper qualifications for the jobs they hold.

"Senior leaders within the DoD are extremely educated and well-experienced to hold the positions they have been appointed to by the president," said Cynthia Smith, Defense Department spokeswoman.

Chu, the man with overall responsibility for the entire $15 billion Defense Health Program, did serve in the Army and went to Vietnam in 1968 to work in a comptroller's office. During the Reagan administration, he was an assistant secretary of defense who advised the secretary of defense on military equipment.

Chu's current bailiwick is wider than just healthcare. He also oversees the Department of Defense pay and benefits programs. He is supposed to make sure that those outpatients are quickly and fairly compensated for their service-connected ills.

But Chu shocked veterans' advocates two years ago when he said, according to the Wall Street Journal, that too much was being spent on benefits for soldiers, as opposed to bullets and bombs. "The amounts have gotten to the point where they are hurtful," Chu said about veterans' benefits in a Jan. 25, 2005, article. "They are taking away from the nation's ability to defend itself."

Other press clips suggest that the Army may have taken that attitude to heart during Chu's watch. The Army Times reported late last month that during the war, the number of soldiers approved for permanent disability retirement decreased by more than two-thirds, from 642 in 2001 to 209 in 2005. (While most disability benefits given by the Army are subject to review in case of significant health improvements, permanent-disability cases are the worst of the worst: These are soldiers whose injuries will clearly leave them disabled for life. A decrease in their numbers is counterintuitive in wartime.)

Serving directly under Chu is Winkenwerder, who has direct responsibility for military healthcare. It is his job to make sure that 1.4 million active-duty military personnel and 1.3 million reserve members get proper outpatient treatment. He is a medical doctor who at one time had a primary-care practice. But he came to the Pentagon from his job as a vice president at Blue Cross Blue Shield of Massachusetts, the largest health insurance plan in New England.

Steve Robinson, director of Veterans Affairs at Veterans for America, briefed staff from both parties on the Senate Armed Services Committee late last week. Robinson, who has visited military posts across the country and has been working to improve outpatient conditions for years, said in an interview that he told the committee staff Chu and Winkenwerder were a big part of the problem. "These gentlemen's backgrounds and expertise come from industries that hail any program that can reduce cost, reduce services, delay care, ignore capacity problems, reduce benefits and economic cost to the DoD for the health outcomes of this war," Robinson said he told the committee. Robinson added in the interview that the two men "bear the full responsibility for any success and all failures that are currently being exposed and that happened under their administration since the war began."

Winkenwerder first responded to the Walter Reed scandal by holding a press conference Feb. 21, in which he emphasized that spending more money would not help improve the situation. "Let me just say, this is not a resource issue," Winkenwerder told reporters. "There are resources to do all the things we need to do to take care of people." He also downplayed the deficiencies at Walter Reed, calling them "quality of life experience" issues.

The White House announced the next day that Winkenwerder would be replaced in what was billed as a previously scheduled departure from the job.