Is the Bush surge already failing?

The president just gave a rosy assessment of his plan, but insurgents have adapted and Iraqis continue to be slaughtered. 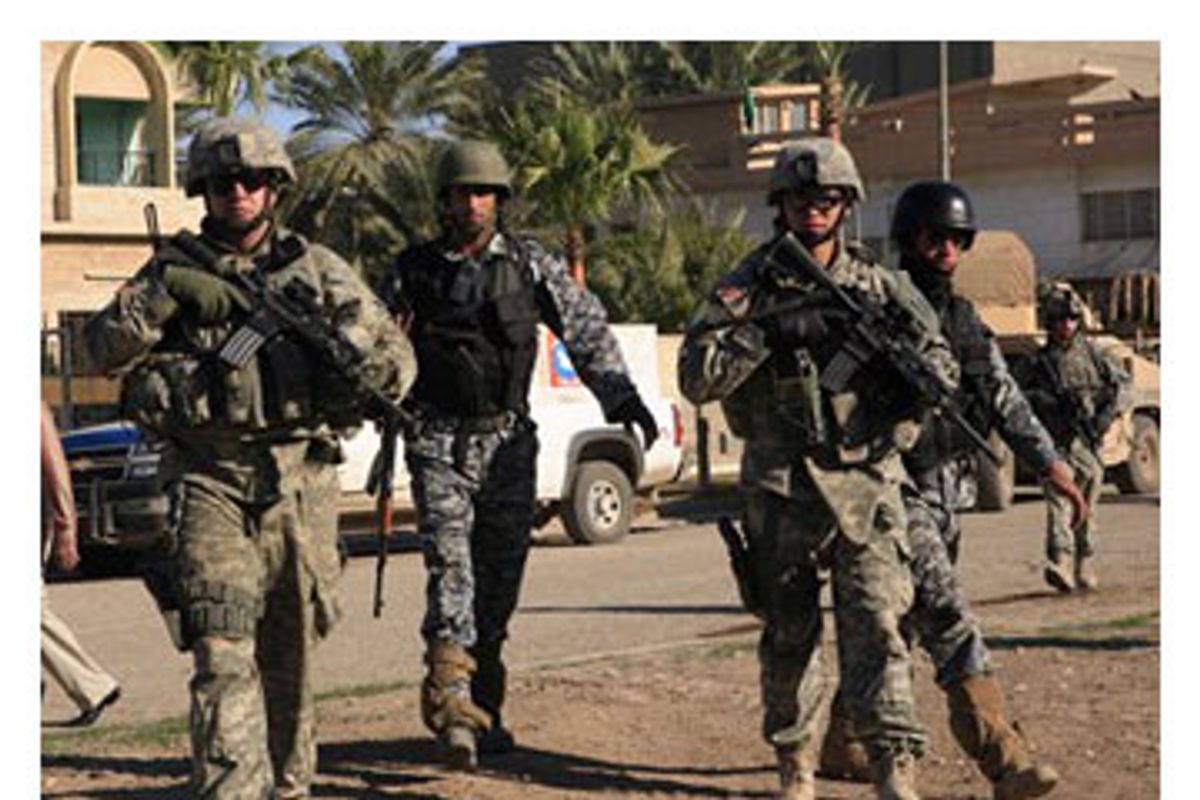 On Tuesday, President Bush said that "even at this early hour, there are some encouraging signs" that the so-called surge is working in Iraq. In fact, three weeks into what the president refers to as the "surge" and what Iraqis call the "new security plan," it's already clear that Bush's last-gasp bid for victory faces challenges that can't necessarily be surmounted by a few thousand additional troops.

With plenty of warning of the U.S. escalation, the Shiite Mahdi Army is lying low. Meanwhile, the Iraqi army and the much better equipped and trained U.S. military have made no appreciable progress against the real drivers of the country's civil war, Sunni Arab guerrillas, who have so far adapted successfully to the new deployments. And perhaps most important, a new spate of massive and deadly bombings has spread insecurity and further compromised the Iraqi government.

The neo-Baathists, Iraqi nationalists and Muslim fundamentalists who make up the insurgency have responded in several ways to the U.S. decision to put extra troops into Anbar Province and Baghdad. First, they have stood their ground, refusing to cede these two pieces of territory to the Americans or the Iraqi government, and they have changed their military tactics.

The Sunni Arab fighters appear to have made a tactical decision to target U.S. helicopters, and perhaps they have recently gotten hold, in the shadowy global arms market, of more sophisticated shoulder-held missile launchers. They have shot down eight U.S. helicopters in the past two months, several of them after the new security plan began. This tactic has made it more difficult for the U.S. to give American and Iraqi troops close air support, and has forced the U.S. to deploy bombers from greater altitudes against suspected guerrilla safe houses. In turn, bombing from a distance increases the likelihood that the U.S. will make a mistake and hit a house full of civilians, providing Iraqi, Arab and European media with heartbreaking footage of children being dug out of the rubble.

The guerrillas have not ceased their attacks in Anbar Province, a key focus of the escalation, where the U.S. military is adding some 4,000 extra troops. Guerrillas have bombed police stations and other sites in major cities like Ramadi and Tikrit on more than one occasion, sometimes killing and wounding dozens of people at a time. On Feb. 24 in Habbaniya, another town in Anbar, guerrillas used a truck bomb to attack a Sunni mosque that was cooperating with the Americans, killing 45 and wounding 110. They have killed a number of U.S. soldiers and Marines.

At the same time that some cells have refused to fall silent or go underground in Baghdad and Anbar, the Sunni Arab guerrillas have shifted some of their attacks to Diyala and Ninevah Provinces, which have Sunni Arab majorities but are not included in the new security arrangements. On Monday, they used a roadside bomb to kill six U.S. troops in Salahuddin Province, and another three in Diyala Province. In February, attacks on U.S. troops were up 70 percent in Diyala, according to the Associated Press. Diyala has a Sunni Arab majority, but because the Sunnis boycotted the last provincial elections, the provincial government, the police and the federal troops are all predominantly Shiite. Locally, American forces are seen primarily as enablers of the Shiite fundamentalist Supreme Council for Islamic Revolution in Iraq. It is not just Diyala. Guerrillas in recent months have driven thousands of Kurds from the large northern city of Mosul, and they have resorted to death squad tactics, often leaving half a dozen bodies in the street at night.

In attempting to suppress the Sunni militants, American troops are not receiving much help from the Iraqi army. The Iraqi brass have had trouble just convincing their troops to come to Baghdad from the provinces to fight. Several battalions have arrived at less than full strength, some of them only 42 percent filled. If troops will not obey a simple order to deploy several hundred miles away from their hometowns, it is difficult to see in what way they can defend the government in Baghdad. Nor had the units from the largely Shiite south managed to establish security in their home regions. As for the two Kurdish units, their deployment against the Arabs of Baghdad is controversial and likely to exacerbate ethnic tensions in the north.

The other problem with Bush's talk of "encouraging signs" is the steep increase in civilian casualties. Since the security plan began, the guerrillas have pulled off a whole series of horrific bombings right in downtown Baghdad, within spitting distance of the Green Zone, where the U.S. and the Iraqi government planned out the new security arrangements.

On Tuesday, the same day Bush gave his rosy assessment of the surge, Sunni Arab guerrillas bombed processions of Shiite pilgrims commemorating the martyrdom of the grandson of the Prophet Mohammed, al-Husayn. They killed some 115 pilgrims. News of the pilgrims' deaths undermined the American claims to be able to provide security, and will certainly eventually result in reprisal killings. Many Shiites believe that the Mahdi Army did a much better job of providing security for the religious processions, and that for the U.S to disarm them this year was a deadly mistake. Since these attempts to target the pilgrims were predictable, it is difficult to understand why the al-Maliki government and the U.S. did not forestall them.

A day earlier, guerrillas set off a car bomb on the famed al-Mutanabbi Street, home of numerous bookshops, on the shelves of which sat rare books and manuscripts that were emblematic of Iraq's deep culture. The explosion killed 38 people and wounded 105, destroying automobiles and setting shops ablaze, sending charred pages of poetry spattered with blood into the sky like leaves in a hurricane. The street has a sentimental value for educated Iraqis and news of the blasts reminded some of them of the predations of bloodthirsty Mongol Gen. Hulagu Khan in 1258.

The previous Monday, Feb. 26, someone blew up government offices during a visit by Iraq's Shiite vice president, Adil Abdul Mahdi, killing 10 persons and wounding many others, including a cabinet secretary. The bruised and scratched vice president barely escaped with his life. Abdul Mahdi angrily accused high officials of his own government of complicity in the assassination plot, without naming names. The day before that, guerrillas bombed offices at the al-Mustansiriya University, killing 41 persons, mainly students, and wounding a similar number. It was the second time the university students were targeted in as many weeks.

This string of major bombings has shaken to the core the confidence of the Iraqi people in the new security plan. Most days there are three or four bombings or mortar attacks in Baghdad. The police corpse patrol in the capital comes upon fewer bodies each day now than last December, but it is not unusual for them to find 15 to 30 bodies every morning, hardly a reassuring figure.

The U.S. strategy assumes that if violence can be dramatically reduced in Baghdad and Anbar, that will give the al-Maliki government breathing room and allow it to assert itself more forcefully. But so far the government hasn't been afforded much relief from the horrific attacks that daily undermine its credibility with the public and provoke destabilizing tribal and religious feuds. That matters, because if Iraqis do not feel that their government can protect them from violence, they will turn again to guerrillas and militiamen. These paramilitary forces, based in the neighborhoods, in turn carry out ethnic cleansing and attacks on police, and further undermine the authority of the central government.

There is still no good evidence that the Iraqi government can achieve "freedom" or that it can sustain or defend itself anytime soon. On Tuesday, the Iraqi parliament failed to convene because it could not garner the requisite quorum. The stony-faced prime minister, Nouri al-Maliki, is speaking darkly of having parliamentarians arrested for involvement in death squad activity, and of dismissing from his cabinet members of the Shiite bloc of radical cleric Muqtada al-Sadr that helped elect him in the first place. As a parliamentary democracy, Iraq is broken.

Contrary to what the president says, there is so far no reason to believe that the new security plan has made a big difference in the lives of Iraqis. The massacre of the Shiite pilgrims this week is among the more ominous developments. Protecting the pilgrims was the most important thing the government could have done. That so many were killed is no harbinger of progress. Three weeks into the surge, the Sunni Arab guerrillas are running rings around both al-Maliki's forces and those of the U.S. How some extra troops for half a year will change that remains about as clear as Baghdad's sky during a spring sandstorm.