The U.S. attorney general's willingness to serve as the president's ultimate yes man makes him unqualified for the office. 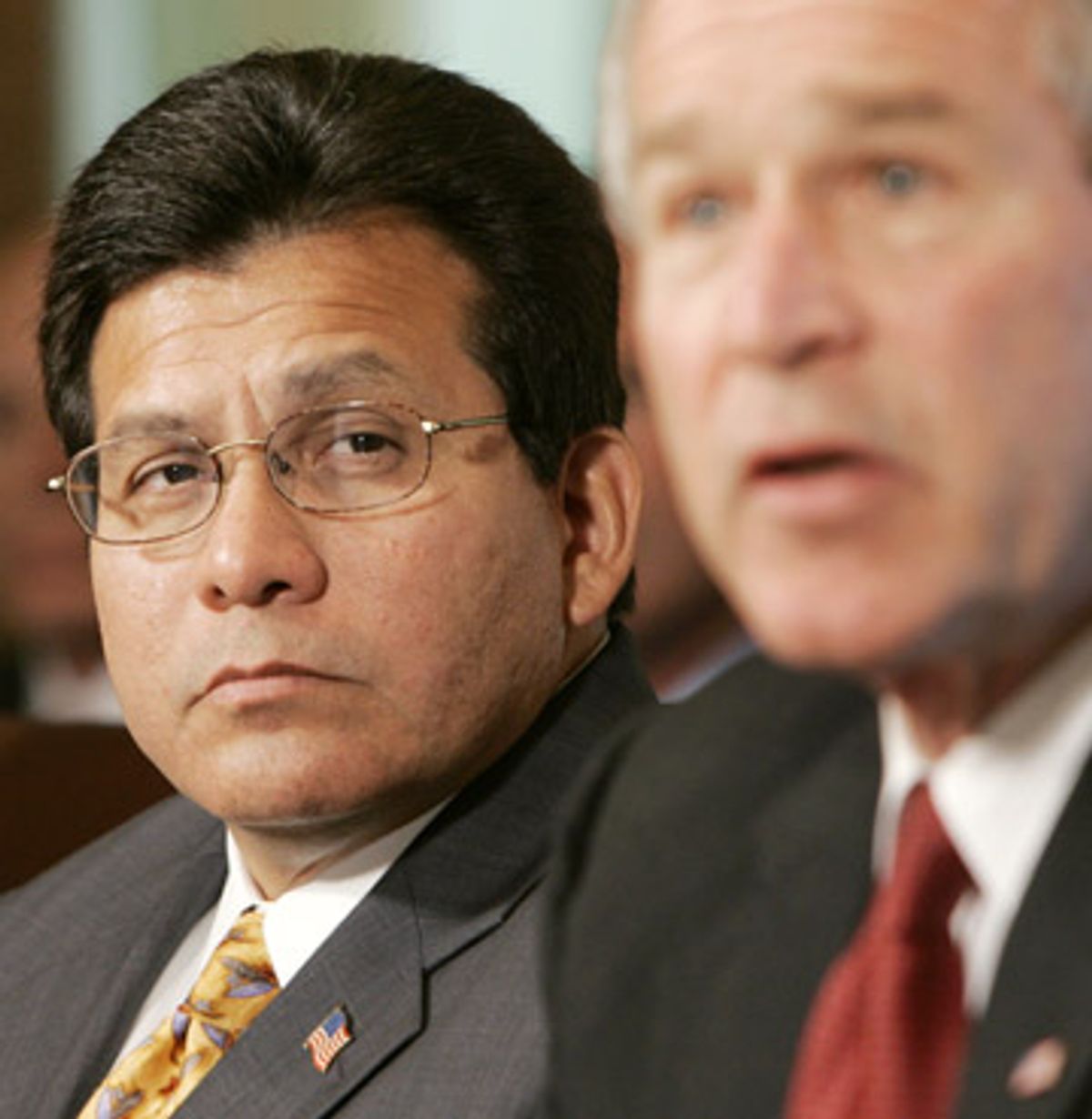 So disturbing was the U.S. attorney general's abrupt dismissal of several federal prosecutors for partisan reasons -- and so insulting is his defense of his actions -- that even some of the most docile Republicans sound outraged. To them it is becoming increasingly clear that the explanations offered by Alberto Gonzales, and his chief aide, Paul McNulty, collapse under the slightest scrutiny.

Ethics investigations of three members of Congress who appear to have colluded in the purge should soon be under way, notably including GOP Sen. Pete Domenici, who quickly lawyered up after former New Mexico prosecutor David Iglesias testified about the senator's blatant attempt to intimidate him last fall. Ironically, Domenici hired a lawyer who has represented former Rep. Randy "Duke" Cunningham, the California Republican who was sent to prison after his multimillion-dollar bribery conviction by Carole Lam -- another one of the purged U.S. attorneys.

As this scandal unfolds, Senate Republicans are noticing at long last the Bush White House's habitual contempt for the nation's legal and constitutional traditions. They bristled at Gonzales' trespass on their turf, which normally includes consultation on the appointment and removal of U.S. attorneys. And several of them were plainly infuriated when Gonzales blithely claimed in USA Today that the purge was "an overblown personnel matter" rather than a venal exercise in political control over the traditionally independent prosecutors.

They think he and his aides are lying.

Listen to Sen. John Ensign, a Nevada Republican whose voice is rarely (if ever) raised in protest against the Bush administration. He was an enthusiastic supporter of Gonzales when the White House promoted him to head the Justice Department after the president's reelection.

But Ensign is now furious because Daniel G. Bogden, whose appointment he had advocated as U.S. attorney five years ago, was among those dumped by Gonzales, over his objections. Told last December that Bogden was being fired for "performance reasons," Ensign listened incredulously on Tuesday as a Gonzales aide admitted that there were no problems with Bogden's performance of his duties. The next day Ensign told the Las Vegas Review-Journal (via TPM Muckraker):

"What the Justice Department testified yesterday is inconsistent with what they told me," said Ensign. "I can't even tell you how upset I am at the Justice Department." Did he believe he had been misled? "I was not told the same thing [in December] that I was at the hearing, let me put it that way." He knew that he had been disrespected -- along with fundamental concepts of American government.

Yet none of this is truly surprising from Gonzales, who can always be counted upon by the White House to do whatever George W. Bush, Dick Cheney and Karl Rove want done. His willingness to serve as the ultimate yes man is exactly what made him suited to serve this president in the first place. And it is why he never should have been confirmed as attorney general, a position that requires independence and integrity more than mere loyalty to the boss.

During his nomination hearings, Gonzales carefully deplored the scandals then besetting the Bush administration, notably the torture and abuse of detainees at Abu Ghraib. He promised to uphold the Geneva Conventions, civil liberties and civil rights. He distanced himself from former deputy assistant attorney general John Yoo's "torture memo." And when asked by several senators whether he had endorsed that infamous memo, Gonzales insisted that as White House counsel his job was not to shape or even comment on legal advice from the Justice Department. His only purpose was to transmit the opinion, which he had requested, to the president. Or so he testified. In fact, he had endorsed the memo's arguments in a note to Bush that also depicted the Geneva Conventions as "quaint."

As we have since learned, Gonzales went still further in misleading the Senate back then. At one point during those hearings in January 2005, Sen. Russ Feingold -- the only senator with the courage to vote against the USA Patriot Act -- asked him whether Bush had the constitutional power to authorize unlawful actions, as the Yoo memo indicated. "Does the president, in your opinion, have the authority acting as commander in chief to authorize warrantless searches of Americans' homes and wiretaps of their conversations in violation of the criminal and foreign intelligence statutes of this country?" the Wisconsin Democrat inquired.

Gonzales tried to brush off Feingold's "hypothetical" question. But in fact he already knew that exactly such warrantless blanket spying programs had been operating for years. Pressed for an answer, he conceded that "the president is not above the law ... it is not the policy of this president to authorize actions that would be in contravention of our criminal statutes." Feingold then asked, "Will you commit to notify Congress if the president makes this type of decision, and not wait two years until a memo is leaked about it?"

"I will advise the Congress as soon as I reasonably can, yes sir," Gonzales replied. He was lying.

Loyal dissemblers like Gonzales can be found in every royal court and indeed are essential to the smooth functioning of any autocracy or banana republic. They are not, however, well-suited to overseeing the pursuit of justice and the enforcement of law in a democracy.

If senators retain any pride in their office and take their constitutional oath seriously, they will not confirm another appointment sent up to them by this attorney general. He has humiliated them and disfigured his office. As Sen. Arlen Specter, R-Pa., said Thursday, in a moment of justified anger, "One day there will be a new attorney general, maybe sooner rather than later." It cannot be soon enough.