Let's call the coal thing off

Coal supplies nearly half the electricity in the U.S. and is responsible for more greenhouse-gas emissions than any other electricity source. Is it too late to kick the habit? 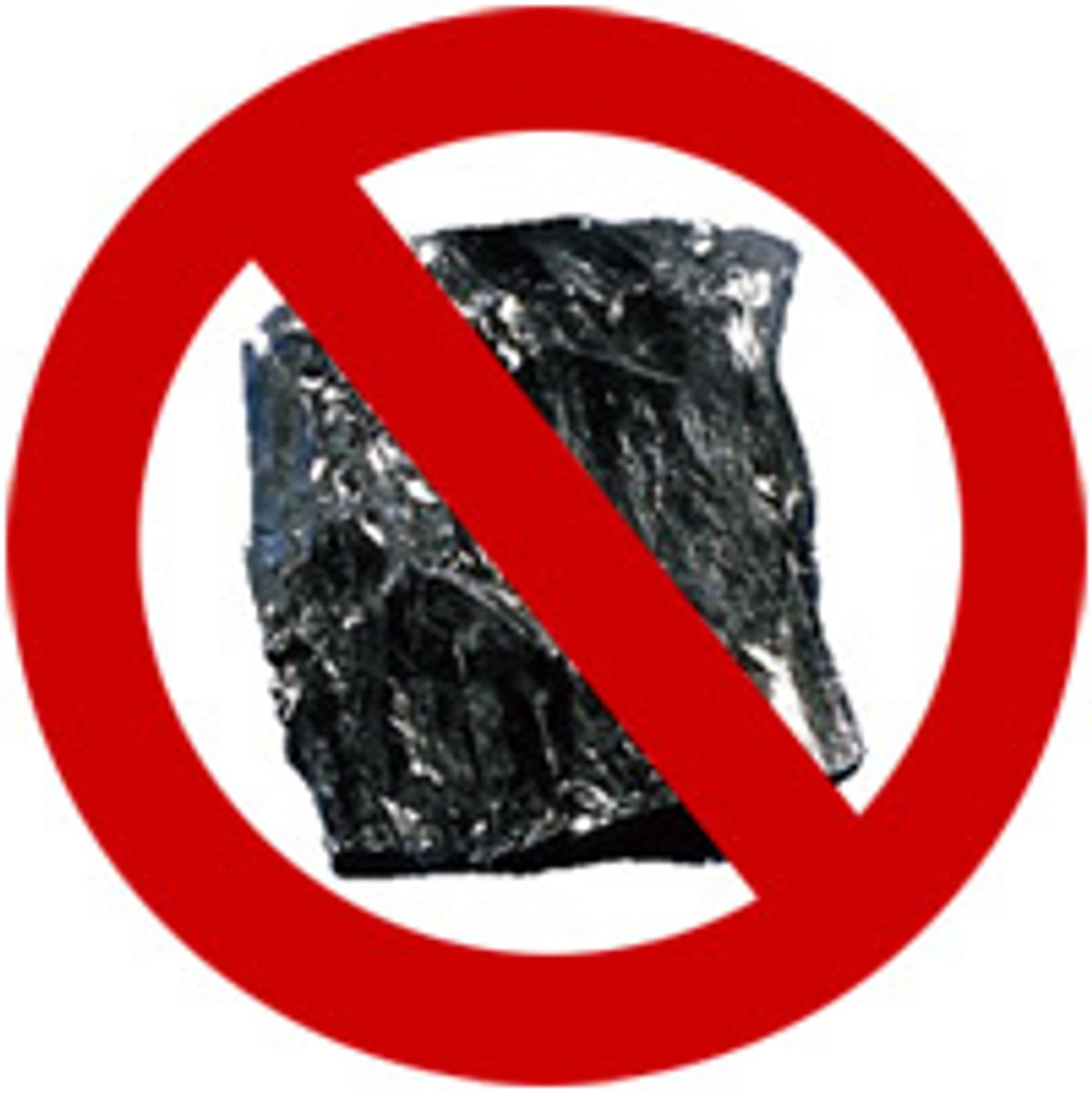 Climate scientists, key members of Congress, enviros and the progressive wing of the business world are plotting a coup d'état. Regime change isn't likely to come soon, but this resistance movement could significantly alter the way the pollution-spewing sovereign wields its power.

The ringleader of this uprising is James Hansen, director of NASA's Goddard Institute for Space Studies and one of the world's top climate scientists. Last week he threw down the gauntlet: "There should be a moratorium on building any more coal-fired power plants," Hansen told the National Press Club.

Coal supplies nearly half the electricity in the United States and is responsible for more greenhouse-gas emissions than any other electricity source. The Department of Energy reported last month that 159 new coal-fired power plants are scheduled to be built in the United States in the coming decade, intended to generate enough juice for nearly 100 million homes.

"If you build a new coal plant, you're making a 60-year commitment -- that's how long these plants are generally in use," explains David Doniger, policy director for the Natural Resources Defense Council's climate center. "So we really need to avoid building a whole new generation of coal plants that use the old technology."

Industry boosters tout the prospect of so-called clean coal, but right now there is simply no such thing. Zero-carbon coal plants -- ones that will gasify coal, filter carbon dioxide from the vapor, then stow the CO2 underground -- are a long way away from commercial application. A handful of coal-gasification plants in development could eventually be retrofitted with carbon-capture and carbon-sequestration capabilities, but for now this pollution-storage technology is years away from even a working pilot phase.

"Until we have that clean-coal power plant, we should not be building them," Hansen told his D.C. audience. "It is as clear as a bell."

Then the esteemed scientist raised even more eyebrows by declaring that, come midcentury, any old dinosaur coal plants that still aren't sequestering CO2 ought to be bulldozed.

Industry reps are scoffing. "Some of Hansen's suggestions are absolutely ludicrous," says energy lobbyist Frank Maisano. "There are fast-growing, rural areas of the country where coal is the only affordable option. Hansen's recommendations would put these areas at risk -- they're a recipe for disaster." Maisano added that the NASA's top dog "may be a great scientist, but when it comes to energy policy, apparently he has a lot to learn."

And yet a growing number of policy makers are thinking along Hansen's lines.

Sen. John Kerry, D-Mass., is drafting a bill that would "prevent any plant from going forward that uses old [coal-fired] technology," said the senator's spokesperson Vincent Morris. Kerry, who chairs the Senate Subcommittee on Science, Technology, and Innovation, expects to introduce the bill in the coming weeks, after ironing out the details on performance standards for advanced-technology coal plants.

"Industry leaders know they are operating in a climate of uncertainty, and that is a very uncomfortable climate for them," Morris says. "They need a clear path charted in terms of the expectations for advanced coal technology, and that's what Sen. Kerry is working on."

The most aggressive climate change bill in the Senate -- the Global Warming Pollution Reduction Act, sponsored by Bernie Sanders, I-Vt., and Barbara Boxer, D-Calif. -- also includes a provision that would require all coal power plants built after 2012 to emit no more greenhouse gases than a combined-cycle gas turbine electric plant, a type of highly efficient natural-gas plant, by 2016. (A similar clean-as-a-CCGT-plant standard is already in effect in California.) By 2030, the Sanders-Boxer bill would require all power plants to be this clean no matter when they came online.

"What that means, effectively, is that you'd have to start phasing in the carbon-sequestration technology as of 2012," Sanders says. "It would offer a big push to get this new technology ready for prime time."

Sanders shares Hansen's emphatic aversion to present-day coal technology: "These plants are destroying the planet! And on top of that they are spewing all kinds of crap that is causing asthma among our children."

It's hard to imagine a moratorium on conventional coal technology being signed into law anytime soon, and yet these proposals still send an important signal. "They make investment in the more advanced coal technology look better to companies and investors because there's less of a regulatory risk," says Doniger.

Even without congressional action, coal's been having a rough go of it lately.

For months, concerned citizens and enviros had been protesting plans by giant Texas utility TXU to build 11 old-style coal-fired power plants in the state. Then, in late February, a handful of private investors proposed buying out TXU for a record-breaking $45 billion, and struck a truce that headed off a lawsuit by Environmental Defense and other green groups by agreeing to cut the number of new coal plants down to three. More surprising, these private entities, which include Kohlberg Kravis Roberts & Co. and Texas Pacific Group, vowed to support a national cap on greenhouse-gas emissions as well as a mandate that TXU invest $400 million in conservation and energy-efficiency programs over the next five years.

Last week, the North Carolina Public Utilities Commission rejected one of two major coal generators proposed by Duke Energy -- which, strangely enough, has been on the front lines of the call for federal climate caps. In exchange for permission to build the one plant, the commission said Duke would have to retire four aging coal units and plow 1 percent of its annual retail revenue -- about $50 million -- into energy-efficiency programs. Duke is now reassessing its plans.

Some environmentalists are bristling over both the TXU and Duke deals, saying that even one new coal plant is too many, and that, in the case of the TXU arrangement, Environmental Defense and NRDC, which also took part in the negotiations, gave up too much for too little (subscription required). Still, these concessions show that the utility industry is significantly rethinking its relationship to an increasingly embattled energy source -- and taking ever more seriously the counsel of environmentalists.

Last week, CNNMoney.com characterized the negotiations between enviros and TXU's prospective buyers as "the latest sign of how the green lobby is increasingly shaping the agenda on Wall Street."

Moreover, argues Sanders, innovations like coal gasification and sequestration technology have the potential to "reestablish the United States' leadership position in the global economy." India and China are adding roughly one major coal-fired power plant every week, so, he says, "it would be a huge boon for us, ethically and economically, to be able to meet that kind of demand with coal plants that are clean."

The fight to set tougher fuel-economy standards for cars and trucks has gotten the lion's share of attention in D.C. discussions of climate policy, but the quest to establish ambitious coal-plant performance standards deserves as much visibility and vigor -- for the sake of the U.S. economy as well as the global climate.