In a defense appropriations hearing, Sen. Patty Murray demanded that military leaders respond to Salon's article about medical reclassification of injured soldiers as fit for combat. 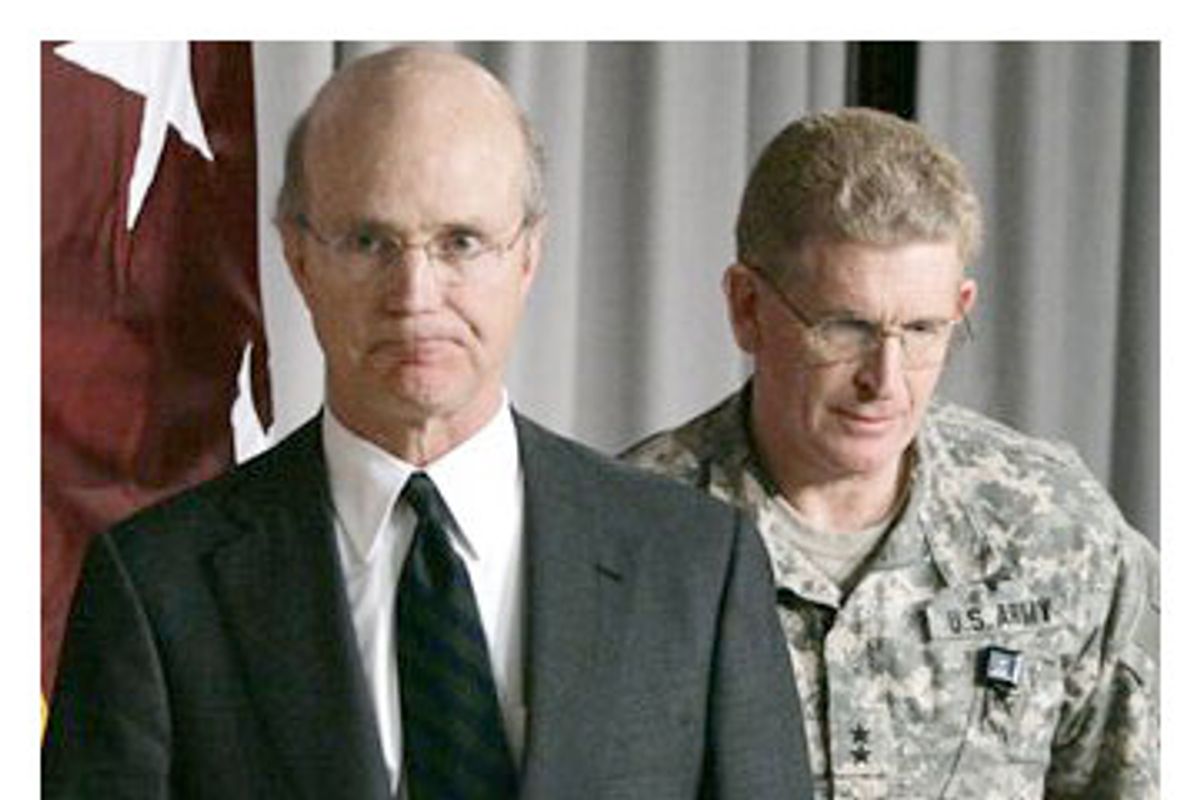 Top Army officials pledged during a Senate hearing Wednesday to investigate whether a brigade of the 3rd Infantry Division is dispatching injured troops to Iraq as part of the so-called surge into Baghdad, Iraq. Pete Geren, the acting Army secretary, told a Senate panel that the Army was troubled by such charges, raised in a March 11 Salon article. "These allegations are serious and any allegations of that sort, I can assure you, we are going to follow up on and investigate," Geren told Washington Democrat Sen. Patty Murray.

On the other side of Capitol Hill, House Armed Services Committee chairman Ike Skelton, D-Mo., asked the Government Accountability Office, the investigative arm of Congress, to "undertake an immediate review of allegations that have recently been reported in the press that wounded and injured soldiers are being sent into a combat theater with pre-existing medical conditions that could adversely impact their military readiness," according to a statement.

While Salon's article reported on allegations at Fort Benning, Ga., specifically, a letter from Skelton and Military Personnel Subcommittee chairman Vic Snyder, D-Ark., to GAO suggested the problem could be widespread. "The committee has received a number of phone calls and letters from concerned service members and their families, including similar allegations that injured and wounded service members are being deployed into combat despite their injuries."

Murray took the lead over in the Senate during a hearing of the Defense Appropriations Subcommittee, peppering Geren and Army Chief of Staff Gen. Peter J. Schoomaker with questions about Salon's article that depicted an effort by the 3rd Brigade of that division to deploy troops with serious injuries, some severe enough that doctors had previously said the troops seemed unfit for combat. Others had skeletal problems that meant they could not wear body armor.

Schoomaker expressed puzzlement at why any commander would want broken soldiers in his ranks in the chaotic war zone. "I don't know of a commander that would want to take somebody with them in their unit that wasn't capable of doing the full job," Schoomaker told Murray. "To me, if that is going on, it is wrong."

Murray also asked Schoomaker and Geren to look into a mass review of the health status of injured soldiers conducted by the division surgeon and brigade surgeon on Feb. 15, as the unit was rushing through an accelerated deployment schedule. Army officials admit they lined up 75 injured soldiers at the troop medical clinic that day to reevaluate their fitness for combat. In an interview with Salon, the division surgeon described a thorough review of medical records conducted by a team of medical professionals who also performed some physical exams. It was an effort, they said, to double-check that all the soldiers were being taken care of.

But 10 soldiers who were there that day, interviewed separately by Salon, described a cursory chat with only the two doctors, just prior to receiving orders to go to Iraq. (At least two of those soldiers have already been deployed.) Medical documents reviewed by Salon showed some of those soldiers received a fresh evaluation on Feb. 15 that made them look healthier, at least on paper.

On Wednesday, Murray asked the two men if the Army was in the business of doctoring medical files to find warm bodies for Iraq, as some had claimed in Salon's March 11 article. "The story goes on to say that some soldiers had their medical evaluations altered although their medical conditions had not changed," she worried. "Is the Army in the practice of doctoring health records just so we can deploy more soldiers overseas?"

Geren responded that he just does not know about the facts in this case. But he added, "If anyone is doing that it is against regulations."

Murray said this issue is not over. She read paragraphs of the Salon article aloud and demanded answers. "I hope that we can get both of you to take a serious look at that and report back to this committee and Congress, because that is a very serious issue if soldiers are going into harm's way who can't wear a helmet for more than an hour," Murray said from the dais. "We need to make sure that is not happening."