Once again, Republicans are using the Clinton dodge -- he did it too! -- to justify the Bush administration's unjustified firing of eight U.S. attorneys. 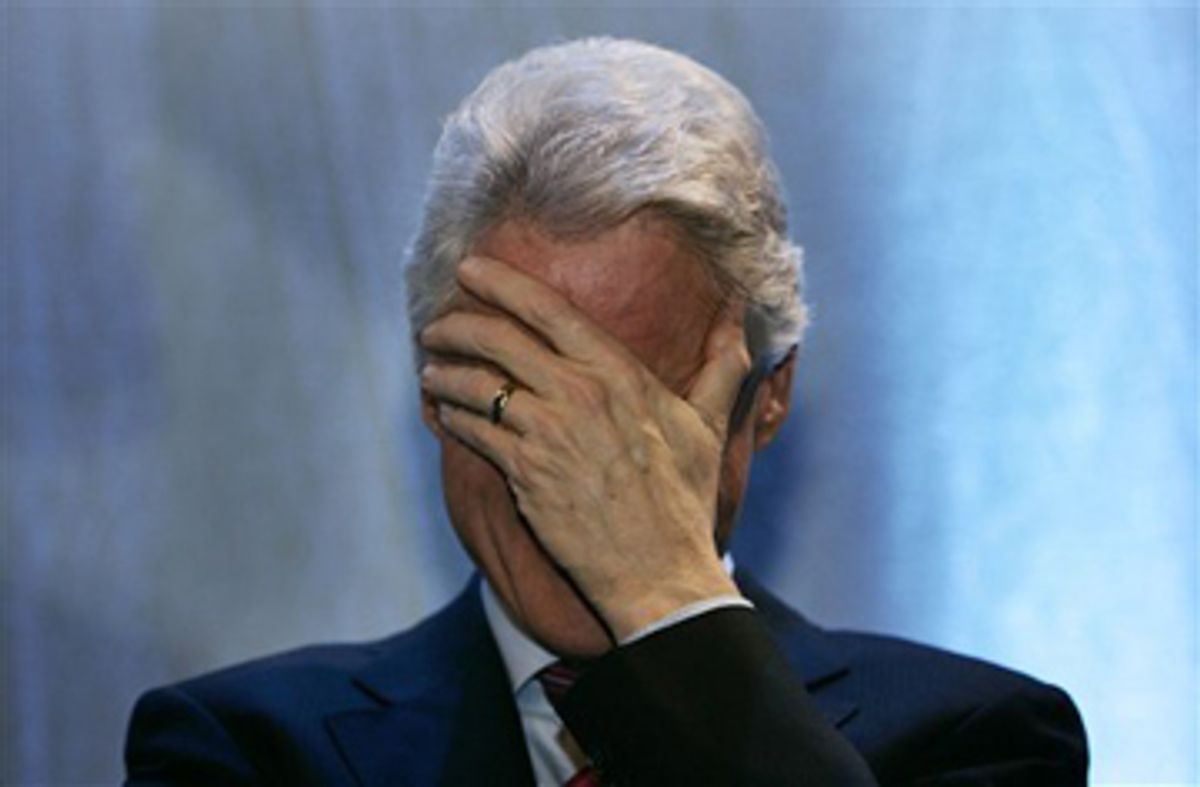 Whatever else Bill Clinton is or was or someday may become, he will forever remain the favorite scapegoat for Republicans in trouble. When they're caught, they always point at him -- just as they are doing now in the midst of the scandal over the political dismissal of eight U.S. attorneys and growing demands for the resignation of Attorney General Alberto Gonzales for his role in the matter.

From the Drudge Report to the Fox News Channel to the Wall Street Journal editorial page, the usual suspects are shrieking in unison:

Bill Clinton fired a lot of U.S. attorneys too! In fact Clinton was worse because he fired all of them at once! And the Democrats didn't complain when Clinton did the same thing!

If those wails are loud enough, hapless mainstream journalists tend to repeat the same bogus accusations. Phony analogies and bad history gush out in a toxic stream of informational sewage. Then somebody (sigh) debunks those claims, just like someone hoses down the street after a parade of circus elephants.

So let's begin this journalistic sanitation project with a question. Was the firing of eight U.S. attorneys by George W. Bush last December in any way comparable to the dismissal of the entire corps of U.S. attorneys by Clinton in 1993? Even the dumbest pundit in America should be able to figure out that the answer is no -- because every president receives the resignations of all political appointees, including U.S. attorneys, at the beginning of his term.

Outraged Republicans can reassure themselves on this matter by forgetting about Clinton for a moment and thinking back to the dawning days of the sainted President Reagan. On May 9, 1981, according to the Washington Post, the Reagan administration was well on its way to replacing all of the U.S. attorneys. A Justice Department spokesman told the Post that William French Smith, the new attorney general, had received nominations for 55 of the 94 U.S. attorney positions so far. Smith was taking nominations, of course, because those positions needed to be filled. As the Post helpfully explained: "Although U.S. attorneys are appointed for four-year terms, it is customary for them to submit their resignations at the start of a new administration."

When the president fires a carefully selected group of his own U.S. attorneys in the middle of his second term for reasons that appear to be political, that's different from what Clinton (and Reagan) did. The difference is not in the rule that allowed Bush and Clinton and Reagan to dismiss U.S. attorneys -- which is that those appointees serve at their pleasure -- but in the reasons behind their actions.

Yet certain conservatives now claim -- as some of them did in 1993 -- that Clinton fired all of those U.S. attorneys merely as a smoke screen for his real motive. They insinuate that he wanted to protect Rep. Dan Rostenkowski, the powerful Illinois Democrat then under investigation by Jay Stephens, the Republican U.S. attorney for the District of Columbia. (A few have also suggested that Clinton wanted to get rid of the Republican U.S. attorney in Little Rock, Ark., to protect himself and his friends from investigation, a completely fraudulent claim that I examine in the current edition of the New York Observer.)

By firing Stephens, Clinton supposedly meant to hobble the Rostenkowski probe. Peevish about his firing, Stephens himself held a press conference to voice the same suspicions.

There is one pretty obvious flaw in that theory.

On May 31, 1994, Eric Holder, the Democratic successor to Stephens, brought a 17-count indictment against Rostenkowksi -- who eventually pleaded guilty to mail fraud and went to prison. This outcome, with an indictment of one of the most powerful Democrats in Congress arriving in the middle of the midterm election campaign, scarcely helped Clinton or the Democratic Party. Many observers believed, on the contrary, that the Rostenkowksi indictment helped the Republicans win the sweeping November victory that gave them control of the House of Representatives for the first time in more than four decades.

Following the Rostenkowski indictment at least two more Democrats in Congress -- Rep. Mel Reynolds, D-Ill., and Rep. Walter Tucker, D-Calif. -- were indicted later that summer, as the fateful Election Day approached. Neither President Clinton nor Attorney General Janet Reno made any attempt to interfere with those decisions.

As a method of escaping responsibility and distracting gullible commentators, the Clinton dodge is now a classic maneuver for Republicans and conservatives. Back in 2002, when Bush was in trouble over his friendship with Enron's Kenneth Lay, the right-wing media insisted that Clinton had once hosted a White House sleepover for Lay. That diversion was an utter falsehood, as any of those who repeated it could easily have determined. It's a fake this time, too -- and it shouldn't distract anyone from holding Gonzales, Karl Rove and all the other authors of the current disgrace to account.