This supernatural thriller, in which Sandra Bullock plays a woman living each day as if it were her husband's last, is too serious for its own good. 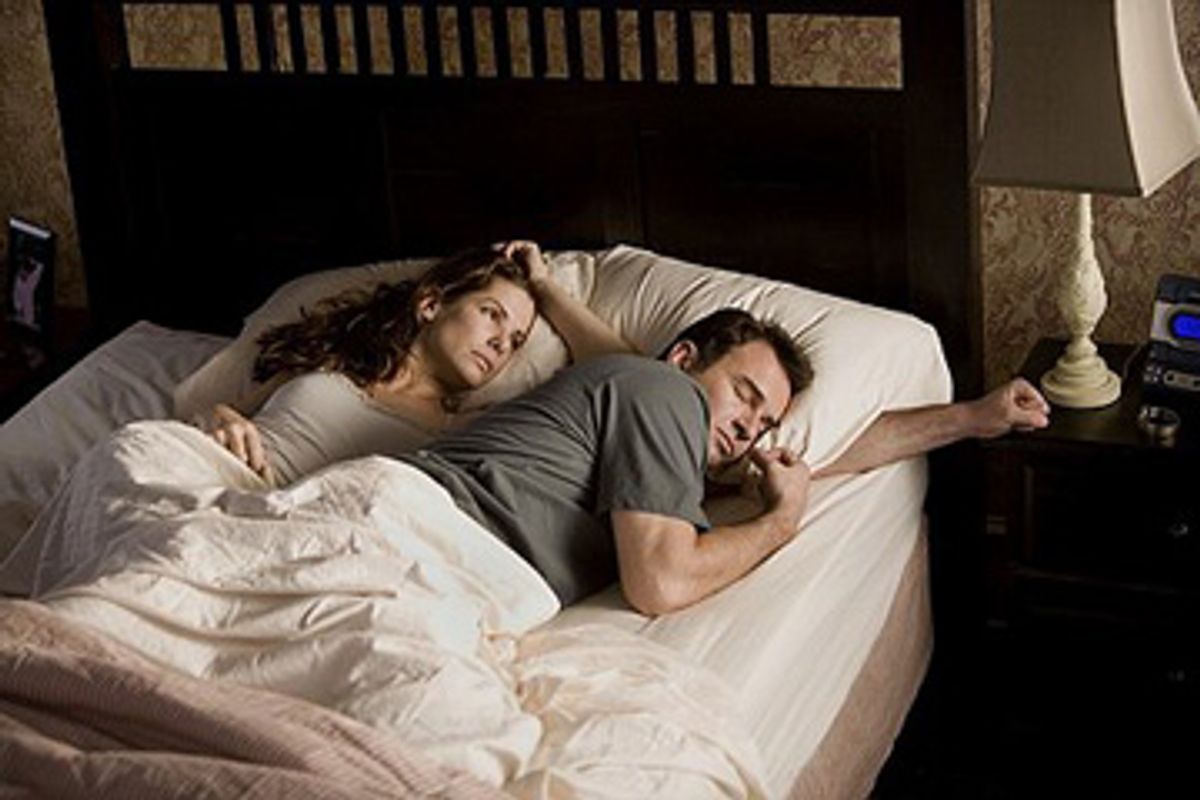 It's no longer enough for a supernatural thriller to be simply spooky and atmospheric: Now, we have to have a spiritual component too, a supplement of phony seriousness to ensure that we're getting enough enlightenment in our entertainment diet. (Thank you, Mr. Shyamalan.)

That might be OK, if a picture is at least entertaining. But "Premonition" -- in which Sandra Bullock plays a wife and mom who, in between doing laundry and ferrying the kids to and from school, develops a knack for seeing the future -- bleeds nothing but grim earnestness. The proceedings begin when Linda Hanson (Bullock) receives a visit from the sheriff, telling her that her husband -- away on an overnight business trip -- died in a car accident the day before. ("We couldn't get to you any sooner," he explains, dimly, perhaps forgetting to add, "because if we had, there wouldn't be anything to hang the rest of the movie on.") Stunned, Linda goes through the benumbed routine of the early stages of grief: She collects her little girls from school, gathering them soberly into her embrace as she explains that daddy isn't coming home again. Ever.

But the next day, Linda wakes up, and there's husband Jim (Julian McMahon, of "Nip/Tuck") having his morning coffee. Phew! He's not dead after all. But Linda's "dream" has rattled her, and the subsequent days are even more unsettling: Each morning she wakes up, in a different nightie or cami-and-jammie-bottom combo, not sure if she'll find her house filled with mourners, or hear her husband splashing in the shower. On the days Jim is still alive, she wonders what she can do to prevent his death. On the days he's dead, she wonders how she'll get along without him.

Linda's calendar and the movie are seriously out of whack. "Premonition" was made by German director Mennan Yapo, from an original screenplay by Bill Kelly. (This isn't a remake of the 2004 J-horror picture "Yogen," whose English title was "Premonition.") As with so many supernatural thrillers, the premise is intriguing and at least mildly fertile: What would life be like if you were unable to remember things that had already happened, even as you have no idea what tomorrow -- in other words, yesterday -- will bring? "Premonition" also tries to scratch at something deeper, suggesting that loving one's spouse often means accepting the dull routine, the annoyances, the imperfections and disappointments that come with partnership. And when a marriage is threatened, the imperfections -- as well as the hope of happiness -- are part of what you're fighting for.

There's plenty to explore right there, but "Premonition" doesn't know when to stop. The picture can't decide between cheap scares or deep thoughts, so it goes for both. Bullock attempts to mine all she can from the material, and she keeps an admirable grip on the crazily swinging pendulum of her role: One minute she's frozen with grief, the next she's tending to her simmering confusion or resentment. Meanwhile, the other characters -- including Peter Stormare as a menacing shrink and Kate Nelligan as Linda's possibly benevolent, possibly untrustworthy mom -- scrutinize her in a vaguely predatory manner, the way Ruth Gordon looks at Mia Farrow in "Rosemary's Baby."

I've never been a big fan of Bullock's, but I've always found it hard to actively dislike her. Here, she's best in her smaller, more casual scenes, as when, after hearing a disturbing phone message from Jim, she retreats to her backyard, cigarette in hand, while desperately trying to rouse him on his cellphone. That cigarette is a lovely, telling detail, particularly at a time in which the depiction of smoking in the movies is being targeted by anti-smoking groups as if it were the equivalent of distributing heroin in kindergartens. (Several groups, including the American Medical Association and the Campaign for Tobacco-Free Kids, have recently, and unsuccessfully, lobbied the Motion Picture Association of America to automatically give any movie depicting smoking an "R" rating.)

But smoking is sometimes part of life: As any former or current smoker will tell you, there are times when a cigarette can seem dearer than life itself. And there's something about the way Bullock holds that cigarette -- at a remove, like something she feels guilty about but can't resist -- that tells us Linda isn't a regular smoker. This cigarette is a last resort, a desperate hedge against the possibility of oblivion. It can't save her, but for a few moments, it wraps her in the illusion that it can.

Bullock wriggles from the wreckage of "Premonition" relatively unscathed. That's no mean feat, considering her character has to endure indignities that include tripping in her backyard and slip-sliding, hands first, into the smooshed guts of a dead crow: Might be an omen -- y'think? Later, riddled with paranoia, she runs to a kindly local priest (Jude Ciccolella) for help. He informs her, "Nature abhors a vacuum, even a spiritual one," and goes on to explain that people who've lost their faith are more susceptible to having forces "bigger than themselves" take over.

The scene reminded me of the time my seventh-grade teacher in Catholic school, a nun, told us that if we saw "The Exorcist," there was a good chance we could become possessed by the devil. (Some of my classmates rushed out to see if it would work; to their grave disappointment, it didn't.) I wondered momentarily if "Premonition" weren't a vague, or overt, "Exorcism of Emily Rose"-style Christian propaganda exercise.

As far as I can discern, it's not -- it merely worships at the Church of "Who Gives a Damn?" Filmmaking. Yapo and Kelly are victims of the exquisitely misguided notion -- all too common in thrillers these days -- that if they throw in enough twists, audiences will become so engaged that they won't notice cathedral-size plot holes. (What follows is something of a spoiler, so please stop reading here if you're sensitive to such things.) In one scene, one of Linda's daughters has an accident that results in stitches and bruises on her face. The incident happens before Jim's "death"; but in the movie's opening scene, set after Jim has "died," the girl's face is unmarred.

If Yapo had shown us the stitches first thing, he wouldn't get to give us a "jump" moment, in which sight of the child's scars hits us as a jarring surprise. "Premonition" doesn't want us to think too hard: The movie's message, after all, is that faith is what really matters. God gave us brains, but so what? "Premonition" wants only our souls.