"I Think I Love My Wife"

Chris Rock contemplates sex and marriage in this sort-of remake of Rohmer's "Love in the Afternoon." 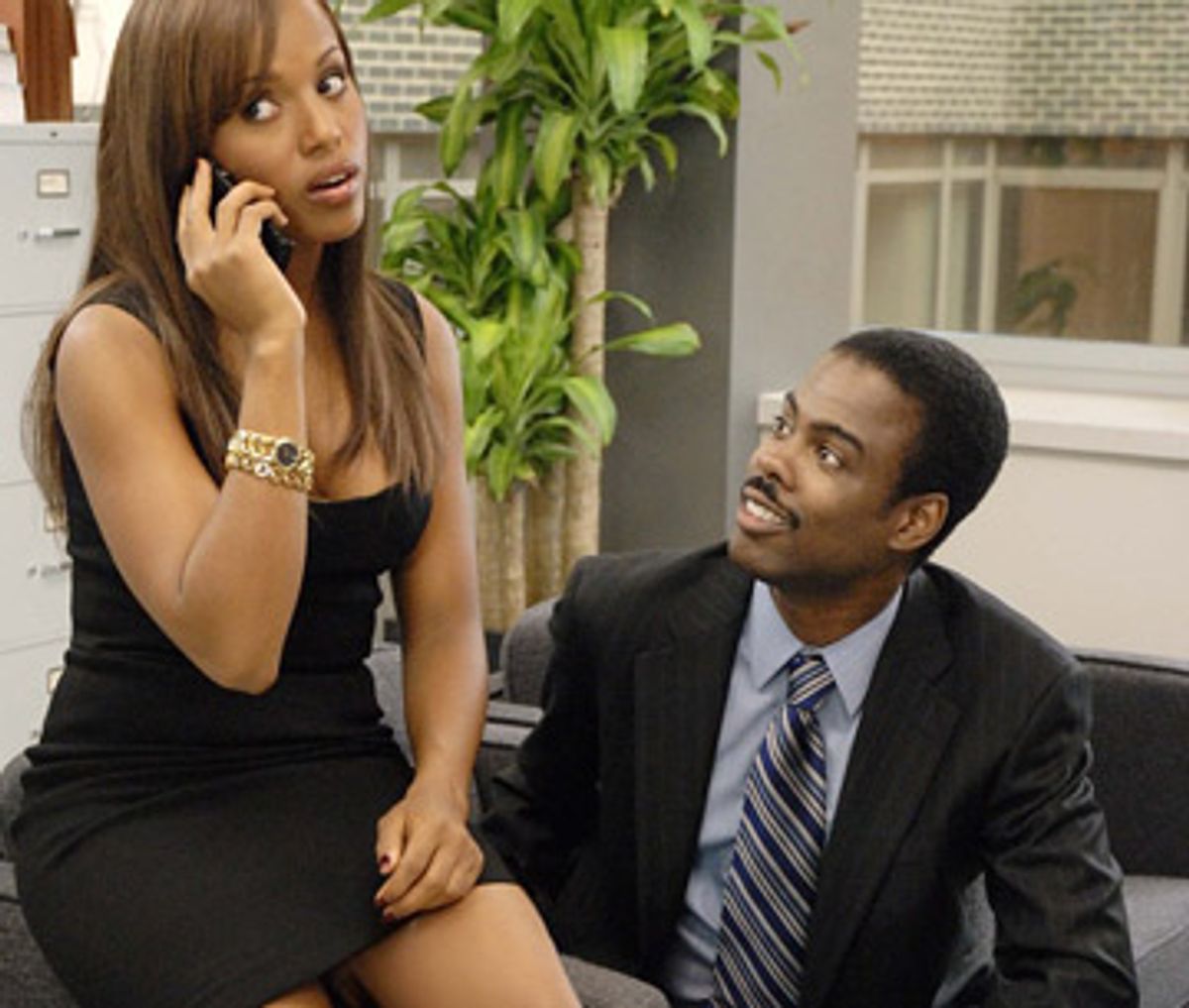 The notion that Chris Rock would even think, let alone dare, to remake an Eric Rohmer movie -- specifically, "Love in the Afternoon," in which a settled suburban husband and father considers a dalliance with an old friend -- is enough to set cinephiles everywhere dashing their berets to the ground. It's OK when a Rohmer hero ogles a miniskirted jeune fille on the streets of Paris; but when Chris Rock daydreams in voice-over about a commuter-train cutie with a dazzling lip-gloss smile, we're surely talking about crass Americanism at its worst.

Rock, who co-wrote, directed and stars in "I Think I Love My Wife," is no threat to Rohmer as a filmmaker. But his remake -- if that's even the correct word -- of the 1972 "Love in the Afternoon" (which was released in the United States as "Chloe in the Afternoon") is, for all its aggressive American obviousness, a much livelier picture than the original. Rohmer is a wonderful director whose movies aren't always wonderful. His pictures, layered with philosophical and often wryly funny dialogue, struggle to articulate the most indefinable qualities of sexual desire: He's the thinking man's skirt chaser (providing the women in his movies are actually wearing skirts, which isn't always the case).

But there's a fine line between analyzing sexual desire and overjustifying it, and in "Love in the Afternoon," Rohmer's inexpressive, opaque characters only get tangled in his words. His point is that their incessant musing about whether or not fidelity is a bourgeois construct is precisely what makes them bourgeois. But they're tiresome to watch, and to listen to, as they inch toward their tiny revelations.

Rock will have none of that in "I Think I Love My Wife." The movie doesn't for a moment pretend to be subtle, and it has a sprawling, unfocused quality. But it's got some juice, and it's even faithful, in some surprising ways, to the essence of the original. "Love in the Afternoon" was the last of Rohmer's "Six Moral Tales" series. "I Think I Love My Wife" throws some sight gags into the mix -- the silliest and most wonderful one involving an issue of the Economist, a bedsheet and a little blue pill -- but the moral struggle at its core is no less vital.

Rock plays Richard, an investment banker at a staid Manhattan firm who commutes every day from his gorgeous (and obviously expensive) house in the suburbs. He and his wife, Brenda (Gina Torres), a teacher, have two preschool-age kids, and between taking care of their family and earning a living, they've lost the energy, and the time, for sex. Richard, in a series of obsessive voice-overs, makes no apologies for the joy he feels at leaving the suburbs behind each weekday morning: In the city, he's free to enjoy the vast variety of attractive women on the street. He seduces them in his mind, but his intent is to remain faithful to his wife, whom he loves.

But then an old pal, with the unabashed porn-star name Nikki Tru (Kerry Washington), struts into his office, all legs, eyes and straightened hair. She lights up a cigarette even in places where she's not supposed to (which is just about everywhere). Her dresses generally consist of two tiny stretchy triangles with an abbreviated apron of fabric hanging below. Nikki is a textbook bad gal, religiously self-centered and deeply manipulative, and Richard knows it. But his stalled sex life, intensified by the fact that he spends his workdays in a cloister of sterility and boredom, makes him vulnerable to her advances, and he starts to wonder if he doesn't just think he loves his wife.

This is a story about trying not to cheat, and Rock, a figure of goofy, gangly suaveness, gives his crisis of indecision some urgency: At one point, weighing (for perhaps the millionth time) the possibility of actually going to bed with Nikki, he deconstructs the received wisdom of living each day as if it were your last. "Bullshit! Life is long, and you're going to have to live with the choices you make for the next 50 years!" Forget tasteful midlife suffering: This is an existential crisis with exclamation points.

Rock, who co-wrote the script with Louis C.K. (creator of HBO's "Lucky Louie," and also the director of the urban-dada masterpiece "Pootie Tang"), tends to go for the blatant joke instead of teasing out the subterranean one. But as a performer, he's so easygoing, so casually perceptive, that he makes even some of the dumbest gags work, and his costars follow suit. Steve Buscemi appears as Richard's best buddy, also an investment banker, and aside from the fact that casting Buscemi as an investment banker is genius by itself, Buscemi wheels through the movie with delicious disreputability. Torres deftly navigates the usually thankless job of playing the harried wife and mom: Her Brenda is sometimes authoritative to the point of bossiness, but even when Richard is annoyed by her, he still seems to grasp that her declarative sentences are what keep the household going. And Washington puts one hell of a push-up bra on Nikki's treachery and allure, giving it shape and structure. She's also content to allow Nikki her shallowness: There's no rummaging around for hidden depth here, and the performance is stronger, and more enjoyable, for it.

Richard's "to stray or not to stray" angst is the focus of "I Think I Love My Wife." But Rock's interstitial jokes -- the ones that riff on issues of race and class, as opposed to marital fidelity -- are sometimes more effective. There's some subtlety beneath the surface of his obviousness: Most movies show us, without blinking an eyelash, happily integrated workplaces in which men and women of color effortlessly mingle among white people, everyone strutting about importantly in their suits and ties. Richard, in one of his voice-overs, tells us outright that he's one of the few black employees at his company. In fact, he explains as we see him entering his office building, he knows every other person of color who works there. A quarter of a beat goes by, and we see him passing the janitor and the cleaning lady, cheerfully calling them by name.

Sure, many city workplaces are more integrated than that. I think what Rock is really challenging here, gently, is our perception of visuals -- our tendency to believe what we see in the movies because we want to believe in it.

In "Love in the Afternoon," Rohmer has his character reflect on the differences between staid suburbia and the vitality of the city. But he never quite makes you feel those differences, as Rock does. "I Think I Love My Wife" gives us suburbs and city not just as separate locales but as vastly different mind-sets -- and those differences are intensified further when race enters the equation. Richard, horsing around with his young daughter, tells her that she'd better work hard, because there are white kids taking the bar at 3. Brenda shushes and corrects him: "W-H-I-T-E, please," she reminds him, suggesting that she and Richard are trying to raise their kids to be unaware of color barriers, even though they can never erase that awareness in themselves. Later, she says the kids have been invited to a play date, and Richard asks, casually, if there will be any "B-L-A-C-K kids" there. Brenda gives him a look that says, "Of course not," and mutters something about joining a "Mocha Moms" group in Westchester. And everyone moves on with the day.

Rock doesn't make the overwhelming whiteness of his community a big issue. But he's also honest enough to recognize that Richard and Brenda would like their kids to grow up with a little more diversity, just as plenty of white parents do. So he makes a few small jokes and moves on -- yet the jokes stick, just a little bit. "I Think I Love My Wife" is first and foremost a sex comedy. But Rock is sharp enough to set it in a world where people of all races share the same dreams and desires -- if not the same real estate.