Shooting his mouth off

Jim Zumbo, legendary scribe of the hunting set, was crucified by the NRA, and axed from his job at Outdoor Life, for declaring that assault weapons have no place in hunting. But don't call him a martyr. 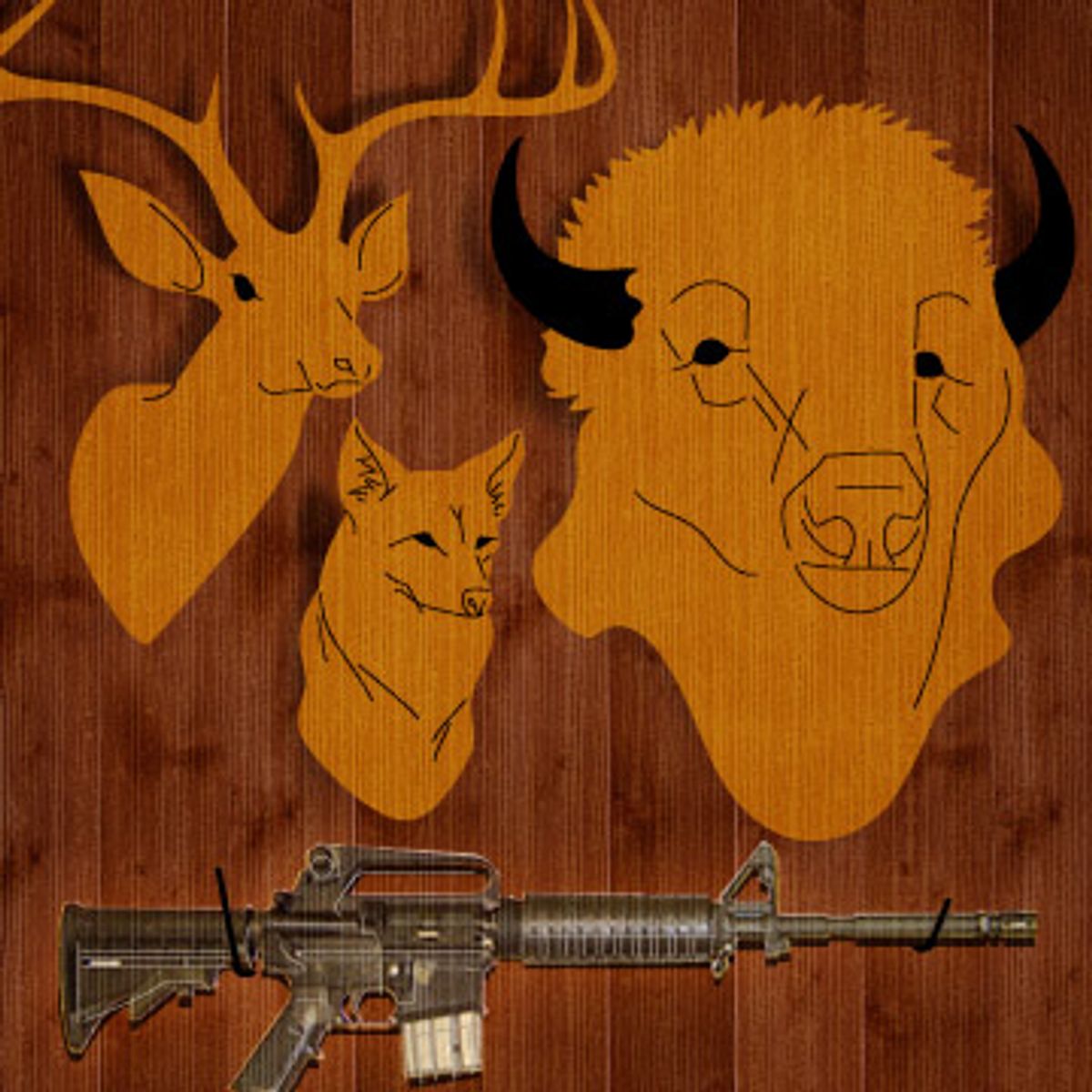 The past weeks have been great for dramatic reversals. Newt Gingrich admitted that he had, contrary to his own previous statements, been cheating on his wife at the same time that he led the congressional charge against Bill Clinton during the Monica Lewinski scandal. A month before that, the nation was somewhat stunned, or at least amused, when the Rev. Ted Haggard proclaimed himself to be "completely heterosexual" after leaving the top post at his Colorado Springs mega-church following admissions that he'd engaged in a long-standing homosexual relationship with a male prostitute. Haggard downplayed the abruptness of his transformation by informing his parishioners that the three-week psychological intensive he underwent in Phoenix actually gave him "three years (sic) worth of analysis and treatment."

If Haggard's reversal causes a little eye rolling, consider that of Jim Zumbo, the recently crucified author of literally thousands of magazine articles and some 20 books on hunting and firearms. In a Feb. 16 blog entry titled "Assault Rifles for Hunters?" on the Web site of the venerable sporting magazine Outdoor Life, where he's been a full-time hunting editor for 30 years, Jim Zumbo expressed his concern about hunters who use AR and AK or "assault rifles" for legal hunting purposes. "Excuse me," he wrote, "maybe I'm a traditionalist, but I see no use place for these weapons among our hunting fraternity. I'll go so far as to call them 'terrorist' rifles ... I say game departments should ban them from the prairies and woods."

It's hard to overstate the gun-owning community's backlash over Zumbo's remarks. Armed with blogs of their own, firearms advocates labeled Zumbo a traitor and generated rapid-fire e-mail campaigns that poured thousands of complaints into the in boxes of Zumbo's associates and sponsors, ranging from High Mountain Jerky, a Wyoming mom-and-pop producer of specialty wild-game curing spices, to the firearms giant Remington Arms Co.

The gist of the complaints was that Zumbo, through his suggestion that certain weapons have no place in hunting, was forcing an internal division within the ranks of gun owners. Critics took aim at Zumbo's frequent use of the phrase "hunters and shooters," which delineates people who own guns for hunting purposes from people who own guns for myriad other reasons, such as skeet shooting, self-defense or predator control on agricultural lands. "We as gun owners have enough problems battling outright opponents to the Second Amendment," the e-mails went. "We don't need to start battling each other as well."

Six days after Zumbo's post, Remington CEO Tommy Milner essentially clicked "reply to all" to the complainants and issued a mass e-mail: "Remington is shocked and disappointed by the comments of Jim Zumbo which have been widely circulated on the web. These comments do not reflect either my own feelings or those of my company! Accordingly we are severing all business ties with Mr. Zumbob

Not surprisingly, the National Rifle Association, a steadfast supporter of Second Amendment rights for both hunters and non-hunters, announced that its organization's magazines, American Sportsman, American Hunter and American Guardian, would no longer purchase articles from Jim Zumbo. Like salt in Zumbo's wounds, even High Mountain Jerky announced that it was removing Zumbo's mug from its packaging.

As the ax fell on Zumbo's neck, editorials in newspapers across the country -- the New York Times, the Austin-American Statesman, the Minneapolis Star-Tribune -- declared him a victim of vitriolic right-wing gun lunatics. But Zumbo opted not to cash in on his newfound martyrdom. On the contrary. He declared that he was "dead wrong" in his blog. The day he wrote it, he explained, he'd been "beat up by 60 mph winds." He was "tired and exhausted," he pleaded. He "should have gone to bed early." Instead, he committed the "greatest blunder" of his long career.

This litany of apologies went on for days. He logged into the chat room on Ted Nugent's Web site and announced plans to purchase an assault rifle and to enroll in tactical training courses to learn how to use it. He and the Nuge, normally an avid bowhunter, confirmed plans to go on a hunting trip using AR-15s. Zumbo vowed to "seize this opportunity to educate hunters and shooters who shared my ignorance."

Having metastasized into a national news event, the Zumbo affair has been portrayed as a story about the rift between gun owners, or as Zumbo put it, between "hunters and shooters." As an avid hunter who gets the the bulk of his dietary protein through the use of firearms, I see the story quite differently. To me, the Zumbo controversy illuminates the perpetual misunderstanding on the part of the American public about the role of firearms in hunting, and I want to use it as an opportunity to clear up some of that confusion. While Zumbo's desperate about-face on assault rifles is sadly comic, many of his critics, despite their own reactionary ways, have a point. Assault rifles are not anathema to responsible hunting. In fact, the last nine or 10 decades' worth of wildlife conservation laws have rendered the assault weapon monster moot. But there remains one enemy to hunting that is far more malicious than any weapon, and that is a failure on everyone's part to protect wildlife and wildlife habitats.

First off, no one really knows how to define "assault weapon." At best, the designation is based on cosmetics. A major misunderstanding about hunting guns revolves around the use of "automatic." Automatic guns fall under two categories: fully automatic and semi-automatic. Fully automatic guns are otherwise known as machine guns. When the trigger is depressed, the weapon discharges a steady stream of bullets until the trigger is released or the gun runs out of ammo. It's very difficult to obtain a machine gun and you can't use them for hunting. In the state of New York, for instance, not only are fully automatic guns prohibited as hunting weapons, you can't hunt big game with a gun that holds more than six rounds of ammunition. Because of federal rules that apply to all states, it's illegal to hunt migratory waterfowl with a gun that is capable of holding more than three rounds.

In his infamous blog post, Zumbo mentions AK and AR weapons. These are military knockoffs designed to look and feel like the sorts of fully automatic guns used by U.S. military personnel and, less flatteringly, the gun that Osama bin Laden props next to himself in his grainy press videos. But in fact they are semi-automatic. That means they discharge one shot per pull of the trigger. Even the fast-fingered Eddie Van Halen couldn't shoot a semi-automatic half as fast as he could shoot an automatic. During the 2004 presidential campaign, John Kerry went on a much publicized goose hunt in Ohio during the month of October. If you look at file photos from that day (it was a carefully orchestrated press event), take note of the gun that Kerry's guide is toting. That's a semi-automatic. It's a wonder that Kerry wasn't lambasted for hunting with a guy who uses a terrorist gun. Maybe the Swift Boat Veterans had the day off.

On the day that Zumbo tapped out his infamous entry, he was in southeastern Wyoming with Remington executives "testing Remington's brand new .17 cal Spitfire bullet on coyotes." Remington's own .17 caliber rifle is a bolt-action, which means the shooter manually loads each shell from the magazine, or clip, by working a lever. Bolt-action rifles are arguably the most "traditional" hunting weapons, though the design of contemporary bolt-action rifles is thanks in large part to military efforts at producing precision, long-range sniper rifles. On his blog, Zumbo may have styled himself as a "traditionalist," a back-to-the-land kind of guy, just out for a friendly jaunt (that he was shooting coyotes, an animal he had no intention of eating, is a whole other issue). But that day in Wyoming he was carrying the most efficient weapon available for his purposes -- more accurate and deadly at long ranges (coyote hunting is a long-range enterprise) than many of the AK and AR rifles that he criticized, a fact ignored by Zumbo and lost on his editorial champions.

Further, that you could even call Zumbo's rifle a "traditional" hunting weapon is a happenstance of history. For most of this nation's existence (and well preceding this nation's existence) hunting methods were strictly dictated by technology. Native Americans hunted with spears and atlatls for thousands of years, but largely abandoned those technologies for a new, more versatile and reliable invention, the bow and arrow. The Spanish introduction of the horse to North America in the 16th century led to the equestrian bowhunter, which is the figure that we know from countless cinematic portrayals such as "Dances With Wolves." Combined, those two seemingly benign technologies -- the horse and the bow -- led to the ecological collapse of the Great Plains bison economy. The animals were extirpated from some portions of their range, and greatly reduced in others, before Europeans themselves made the scene. This collapse was rushed to its terrible conclusion in the mid-1800s, with the introduction of an even more sinister combination: railroads and Civil War-era rifles.

The same recipe for disaster played out again and again in the ensuing decades, with a variety of ingredients. The advent of dynamite in the 1860s led to the practice of blasting passenger pigeon roosting trees, which directly contributed to the extinction of that wonderful bird, in 1914. Other technologies and practices led to other disasters, including the near disappearance of such iconic creatures as the turkey, cougar, beaver and easily a dozen different species of ducks and geese. The madness began to end in the 1920s and 1930s, when a proliferation of conservation laws effectively severed the direct link between technology and hunting methods. That is, with regulations such as bag limits, closed seasons and licensing (and well-funded state and federal agencies to set and enforce these regulations), the level and scope of game harvesting came under the control of something beyond how effectively hunters "could mow down deer," as one of my well-meaning friends said, with whatever technology they could get their hands on.

My point is that it's not firearms, or certain types of firearms, that might threaten hunting today; it's the regulations that govern the use of all weapons on our remaining wild lands, whether that weapon is a bow-and-arrow in the hands of a Vermont poacher killing black bears for the illegal market in gall bladder, or a bulldozer in the hands of a Montana developer selling inter-mountain trophy estates with names like Elk Meadows, or a roll of 10-foot fence in the hands of yet another Texan who's looking to enclose a herd of imported exotic species on his own private hunting reserve. In the end, it's doubtful that Jim Zumbo's initial comments, or his retractions, will have any effect on either the practice or perception of hunting in America. But if hunters choose to squabble about guns and "tradition," instead of taking on real conservation issues, we will not be asking "Remember Zumbo?" Instead, we'll be asking, "Remember hunting?"

Steven Rinella is the author of "The Scavenger's Guide to Haute Cuisine" and a contributor to Outside magazine. He lives in Alaska.