Why did unnamed Obama supporters attack Al Sharpton? He's only asking questions that need to be answered. 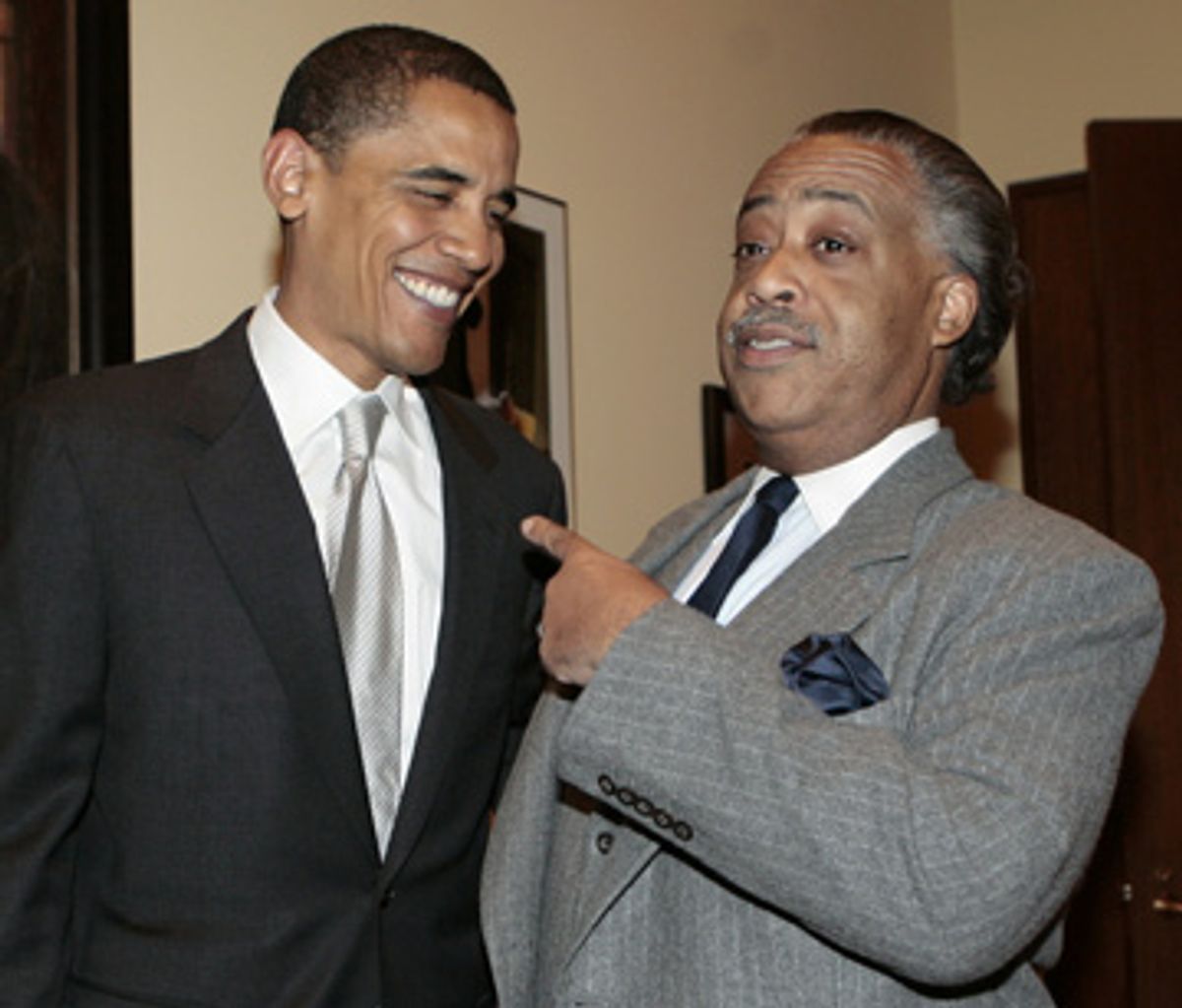 Say it ain't so, Barack.

Say you didn't authorize it (or gloat) when your henchmen pulled down your elder's pants in public and tried to humiliate the Rev. Al Sharpton in the pages of the New York Post. Whatever Senator Obama thinks of a figure as controversial as Sharpton, black America must demand that he use his position to send a forceful message that neither mudslinging nor extortion will be the hallmarks of a historically disenfranchised group that has long condemned whites for their disgraceful political behavior. Just what the world needs -- more proof that power corrupts. With black support still in play among the leading Democratic contenders, rest assured they'll be watching to see how Obama responds to his supporters' attempts to marginalize (through the white media, no less) those blacks with the temerity not to worship him instantly as the anointed one.

Watching the growing pains of a black polity trying to grow itself up in this brave new post-civil-rights world is wrenching, but it proves the truth in the cliché: no pain, no gain. This juvenile, malicious and cowardly attack on Sharpton more than proves the point that managing their newfound political relevance is a tightrope walk that blacks have not yet mastered. Since blacks aren't going to stop being a crucial voting bloc anytime soon, it's crucial for them to ignore the slings and arrows of white derision and black group-think while they gain their footing and keep their eyes on the prize (to mix a few metaphors). The trouble, though, is in identifying exactly what the prize is: blacks elected to high office? black power-brokering and election of their preferred candidates irrespective of race? black cohesion regardless of individual preference or conscience? or how about the maturation of black intellectual, political and moral authority?

I vote for the last option, maturation -- so hang tough, Reverend Al. And Right On to that meaty middle finger you've offered in response to black power's attempt to silence any who step out of line. White elites are certainly doing their part to squash black intellectual and political independence (man, do y'all hate it when we don't do as we're told), but New York Post columnist Fredric Dicker's anonymously sourced attacks on Sharpton highlight a worrying tendency among blacks to demand obeisance to a party line. I know the stakes are getting higher, with rising political figures like Barack Obama and Massachusetts Gov. Deval Patrick, but it should be illegitimate to demand lockstep loyalty within any interest group.

Feel free to peruse Dicker's contribution to the black cause, or trust my condensed version. Suffice it to say that blacks are no more strangers to silencing and schoolyard bullying than any other group. Supposedly "the high-profile, self-promoting" wannabe Sharpton, driven "crazy" by jealousy and failure, "has launched a 'big-time' effort to tear down" Obama, that white-backed poseur with no community ties, surrounded by shady nobodies. I'm surprised Sharpton wasn't fingered for dropping a dime on Obama's Marlboros and parking tickets. It's Sharpton as Salieri, the bitter, conniving also-ran. How did Dicker "learn" this? From "[a] prominent black Democratic activist who knows Sharpton" and "who supports Sen. Hillary Rodham Clinton," from "another black Democratic activist," "a source close to [Sharpton]," "Democratic activists," and "a prominent New York official." Not one of these "knowledgeable sources," proof of Sharpton's venality clutched in their hot little hands, was willing to put his or her name where his or her big, fat mouth was. Please.

Sharpton, being Sharpton, wasted no time hightailing it to the OK Corral. He told CNN, "It's important to point out, they started this ... I wake up yesterday morning with no warning and [read] 'Is he jealous because he won't endorse?' I've never heard anything like that in my life in politics. This is one time I didn't start the fight." Sharpton went on to explain that he was withholding his endorsement until he got his questions answered on issues like Obama's civil rights agenda, why Obama stumped for Joe Lieberman (an Iraq war supporter), Obama's stance in support of tort reform and the like. "Why shouldn't the black community ask questions?" Sharpton asked. "Are we now being told, 'You all just shut up'?" Good questions, especially this one: Who's telling blacks to shut up? Other blacks, that's who, however much Obama's white supporters might agree.

I have no doubt that Sharpton is jealous of Obama. Hell, I'm jealous of him. It's doubtful that there's anyone who spent decades crawling up the political ladder whose admiration isn't mixed with at least a soupçon of "What's so great about him?" Indeed, I argued that mainline civil rights leaders like Sharpton and Jackson need Obama to pay obeisance and show them public respect, if only to take the sting out of his leaving them in the dust. But much more important, Obama needs to respect blacks in general by explaining himself to us, answering our questions, and bloody well winning our vote. Whatever Sharpton may be feeling in his heart, he's doing his job as a black leader, let alone as a voter, by withholding his endorsement until he's convinced that it's in his, and his people's, best interest to bestow it on a particular candidate. It's ridiculous to court his endorsement and then denounce him as an insubstantial playa-hater. We can only hope that this ad hominem whisper campaign was not sanctioned by the heretofore classy Obama. Sharpton now says that the senator did call him after the article ran, but that he hasn't yet returned the call. Admittedly, that's classless on Sharpton's part. But still. Here's looking for a follow-up article on a staffer or advisor suddenly cut loose from the Obama campaign.

Of course, I've held off as long as possible pointing out that the good reverend brought these suspicions about motive and character on himself. His actions during the early years of his public life will forever mar his credibility. Two words: Tawana Brawley. There were other scandals and much mishandled activism, but the Brawley debacle alone was enough to make it impossible for Sharpton ever to become a U.S. senator or any other kind of mainstream politician himself. The refusal of an ordained minister 20 years later to admit his heinous mistake or apologize to the man whose life he ruined -- and his noncompliance with court-ordered restitution 10 years after losing a lawsuit -- is, simply, unforgivable. He asks of America what he himself is unwilling to do: face the music.

It's really too bad because, always a crack debater, Sharpton has matured as a thinker and a leader. Far more often than he's given credit for, he spanks black America and works for the rights of nonblacks. Yet there will probably always be a limit on how seriously America at large is willing to take him. Perhaps that's why Obama's proxies felt confident in attacking him. Will Rev. Al ever admit his error? Louis Farrakhan has, albeit sputteringly. Thug par excellence Suge Knight has (sort of), Snoop and Diddy have (kinda).

Here's hoping Sharpton has it in him. Supposedly, he's mellowed since he survived a minor stabbing in 1991. He's admitted that the medallions and track suits that were once his trademarks were camouflage for the flab he's now worked off, and he's taken brave stands no one gives him credit for. He's denounced gangsta rap, nihilism, underachievement, misogyny, homophobia and black apathy on HIV, facts I didn't know until a few years ago when I read up on him looking for confirmation of his uselessness and "race baiting." I came away surprised and impressed, especially once I realized that his presidential runs, like Jesse Jackson's, at least forced America to talk about an urban agenda, albeit only up through primary season. And looky, looky, now Rev. Al's making sure that the 2008 candidates must "talk black," too. However tarnished Sharpton's credibility might be (and his judgment can be astonishingly bad), we wouldn't all be talking about him if he didn't matter to blacks, who have always known how to read between the lines of mainstream discourse. No Cold War Kremlinologist deciphering reality from the hogwash in Pravda has anything on a Negro reading the New York Post and rolling his eyes.

So hang in there, Rev. Al, and keep fighting the power. It's just too bad that this time it's black power.