Israel goes on the virtual offensive

The Israeli government is deploying new tactics to deepen ties with American youth and evangelicals. 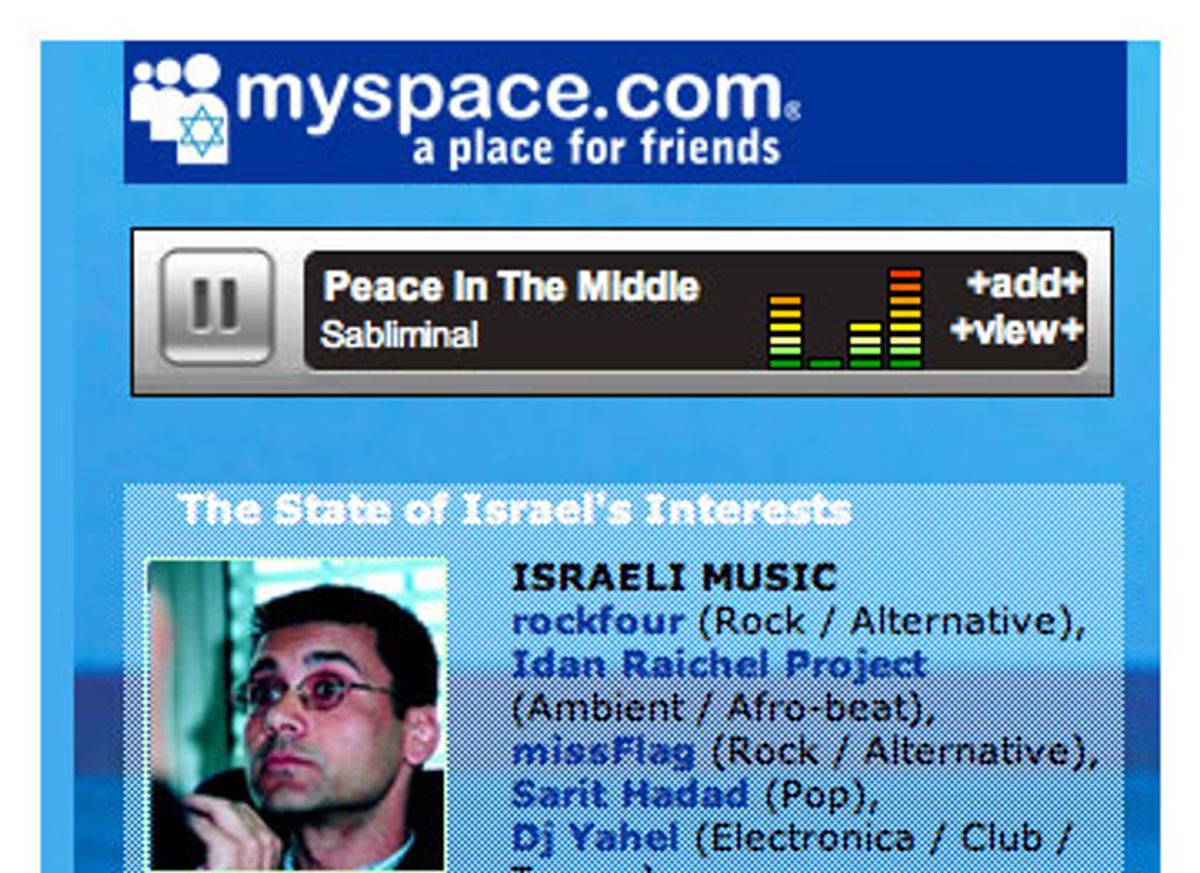 For the moment at least, the state of Israel has 553 friends. One of them is Leonardo DiCaprio.

The 20-something Israeli official who is showing me Israel's new MySpace page, however, says she isn't sure if the link to the Hollywood heartthrob really leads to him. We're sitting in the offices of the Israeli Consulate in New York, where Israel's official MySpace page was launched in January under the direction of officials from the Foreign Ministry. The 20-something official mentions that the Philippines also now has its own MySpace page, adding excitedly, "They're one of our friends, too. Isn't that nice?"

According to its profile, Israel is a single female, 58 years old, a Taurus, who lives in Jerusalem. (When asked if Israel's close ties with the United States meant that she should perhaps be listed as "in a relationship," the young official demurred.) The MySpace page automatically greets visitors with a sleekly produced hip-hop song called "Peace in the Middle," with lyrics in both English and Hebrew that include "Stop this holy war" and "What are we dying for?" It shows pictures of Israel's beaches, glitzy hotels and the Tel Aviv skyline. In the section labeled "Who I'd Like to Meet," it presents a slideshow of attractive young people who look lifted straight out of a fashion magazine. Israel, it seems, is mostly interested in meeting models.

The MySpace page is part of a wider effort, including Internet television and other online initiatives, led by an Israeli diplomat named David Saranga. Under Saranga's direction, Israel hopes to reach out to young Americans by adding some hip and stylish gloss to Israel's image and building a greater sense of connection in the process. Citing research on Israel's image in the United States, Saranga told me recently: "We saw that we had a problem with the age group of 18 to 35, and the reason is that this group doesn't see Israel as relevant. So we have to talk to them in their language, in platforms that they are using, and the new media is one of the ways to do so."

In addition to the MySpace page, the state of Israel also now has its own blog -- the first country-as-a-whole to have one, according to Saranga. The blog is called "isRealli" so as to incorporate the word "real." It also sports the slightly odd subtitle, "The New Blog of Israel." ("You can tell that the person who named it thinks they speak English better than they actually do," one of the young officials in the consulate commented to me.)

Updated several times a day by anonymous government employees, some of the blog's recent posts have been titled "Hummus Up to My Eyeballs," "'Mamma Mia' in Israel," and "Who Says We Can't Dance?" Although these entries valiantly attempt to fit in with the informal and irreverent tone common to the blogosphere, they carry an unmistakable whiff of government talking points. The blog entry used to introduce the state of Israel's MySpace page, for example, began, "We all know that Israel sometimes has a tough time making friends," before urging readers to "join our friends list" and "check out our favorites." A post from Thursday titled "Maximum Israel" notes that the widely read American men's magazine Maxim has a forthcoming spread on the beauty of Israeli women -- a feature the Israeli consulate pushed for as "part of our latest efforts to show a little more of Israel's sexier side." (The post further notes that Maxim's editors were reluctant at first, but after they were sent pictures of 12 Israeli models, "it was smooth sailing from that moment on.")

Israel is reaching out with other online initiatives. Both its blog and MySpace page link to videos on YouTube -- many of them posted by a mysterious user named "Hollyyyyyyy" -- which aim to make Israel look attractive in the eyes of young Americans and disarm the conflict-centric image so prevalent in the Western media. The videos highlight Israel's achievements in technology, medicine, business and entertainment. They also show a lot of people wearing bikinis. There is nobody wearing a military uniform in the videos, even though military service is compulsory for all Israelis after they turn 18.

Another video, posted by a user called "Koshergirl2007," is called "Gay Scene in Israel" and shows scenes from Israel's Gay Pride Parades and gay nightclubs. It is meant to demonstrate to America's gay population that Israel is a gay-friendly country. This is also a theme frequently highlighted on the blog. Saranga says that this is just "presenting the reality" in Israel. "When we speak in front of gay audiences" in the United States, he says "sometimes they are amazed at how liberal Israel is."

Inevitably, though, Israel's new media push could not be free from politics, which arrived in part with Israel's recent blog posting about the big European music competition, Eurovision. For the competition -- which takes place this May and is wildly popular in Europe and all over the Middle East -- each country chooses a representative band and song. Not everyone is happy with Israel's choice. There was talk recently by the event's organizers of banning Israel's entry for politicizing the Eurovision competition, though they have elected not to do so. Teapacks, the band representing Israel, will be singing a song called "Push the Button," an apparent criticism of Iran's alleged nuclear weapons program. Israel's blog promotes the country's Eurovision entry and links to a YouTube video that shows the band performing the controversial song. The multilingual lyrics include "There are some crazy rulers/ they hide and try to fool us/ with demonic, technological willingness to harm," and the refrain, "They're gonna push the button, push the button, push the button, push the button."

In fact, in the near future the Foreign Ministry will launch a second blog, one devoted exclusively to politics. The plan is to have Israeli Foreign Ministry officials post their thoughts on the current political situation in Israel and the Middle East, and allow readers around the world to post responses. Some worry it is an online war waiting to erupt, but Saranga remains optimistic. "The government of Israel will have a direct dialogue with readers everywhere," he explains.

In April, Saranga and his colleagues are also set to launch an Internet television station aimed at American evangelicals and other Christians. According to one of the officials involved in the project, the station will have content that "speaks to Christians of all denominations" and "shows Christian movies and clips." All this, he said, would be accompanied by a "really funky design" that is being coordinated by "Christian experts" hired by the Israeli government. It's not clear whether the site will include a link to the "Gay Scene in Israel" video on YouTube.

Saranga and other Israeli officials are proud of Israel's MySpace page and other nascent efforts to break into new media. They point to some early improvement in relations that have gone beyond American youth. "We were surprised by the kinds of people who wanted to be friends with Israel," one of them told me, mentioning that the blog sometimes receives visitors from Saudi Arabia and Iran. For a while, he said, Israel's bloggers were regularly conversing with someone from the United Arab Emirates, though eventually it became clear that he was only interested in trying to sell them real estate. Still, the official remained enthusiastic about the overall effort to show "the young lady that Israel is and what she's got to offer!"

As of this publication, she now has 937 friends on MySpace, though it is still unclear whether one of them is the real Leonardo DiCaprio.