Can this Adam Sandler movie help you work out your residual 9/11 issues? 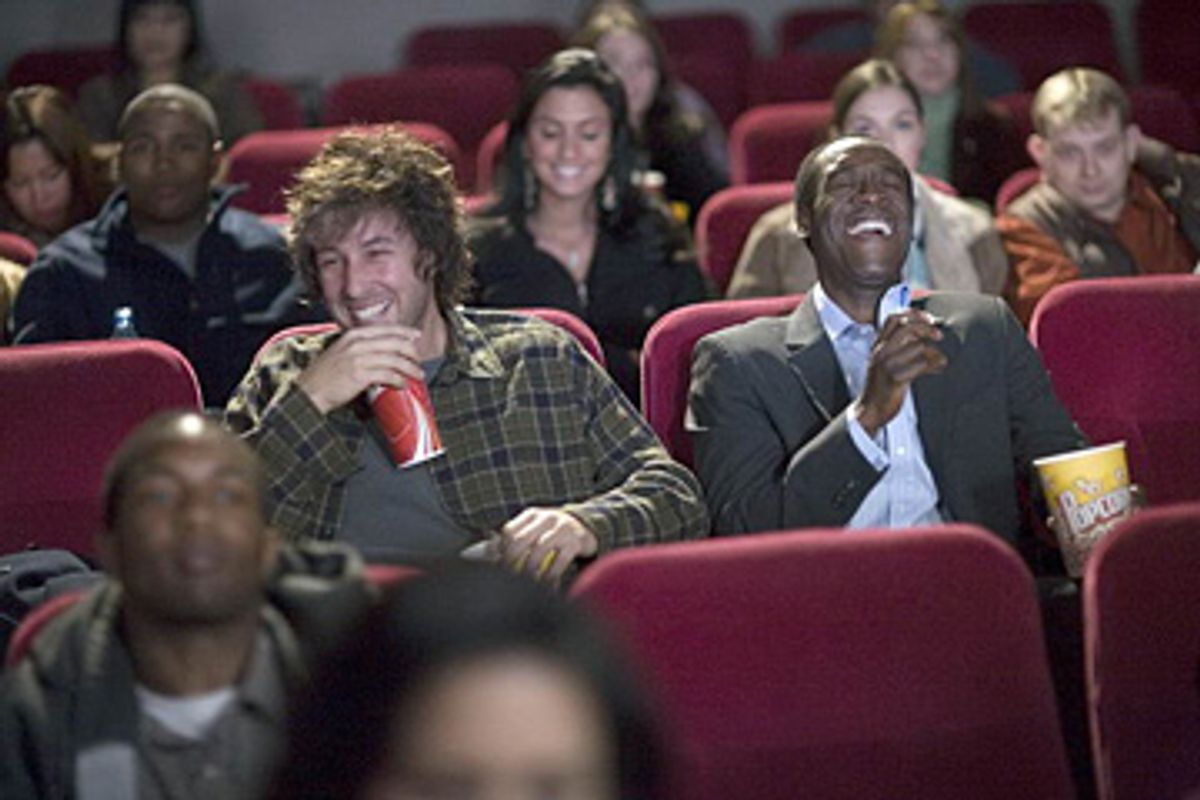 Long ago, in the ancient times of just last year, moviegoers everywhere were debating whether it was "too soon" for filmmakers to begin addressing the horror of 9/11. There's no definitive answer to that question, but apparently it's never too soon to use 9/11 as a catalyst for a squishy drama about connecting with our lost selves, about getting on with things, about healing our wounds individually and as a nation. Mike Binder's "Reign Over Me" is the first 9/11 therapy movie: Even if you didn't lose anyone on 9/11, you probably still have some buried inner pain over something or other. Now's the time to let it out in one long, primal scream, which at one point, Adam Sandler's character in the movie actually does. Feel left out because you didn't have a personal connection with anyone on one of those ill-fated flights, or with a firefighter who lost his life, or with any of the thousands who couldn't escape the World Trade Center? Not to worry. In "Reign Over Me," 9/11 victimhood is for everyone: You can feel the exhilaration of recovery without going to the trouble of suffering the pain that necessitates it in the first place.

Sandler plays Charlie Fineman, a one-time dentist who has barely been able to bring himself to shave, let alone go back to work, since he lost his wife and three daughters (and, for an extra soupçon of pathos, the family dog) on 9/11. He tools around nighttime Manhattan on a motorized scooter thingie; otherwise, he stays at home in his enormous and extremely depressing apartment, remodeling his kitchen only to tear it apart again, jamming along with Bruce Springsteen records, and playing a video game in which the goal is to slay giant medieval creatures -- symbolism, ho!

Charlie doesn't have to work, thanks to insurance payouts and the like, which is a good thing, since he's incapable of holding a conversation with another human being and is prone to violent tantrums. Once a prosperous fixer of people's teeth, Charlie has regressed into a mumbling manchild with a slumping gait and an uncombed thicket of hair: His suffering has caused him to reinvent himself as an autistic Bob Dylan. Luckily for Charlie, an old college buddy, Alan Johnson (Don Cheadle), spots him on the street one day and immediately feels his pain: He'd heard about Charlie's loss, and had tried to contact him shortly after 9/11. But Charley had already disappeared into his comforting universe of video games and '80s rock 'n' roll records.

Now Alan -- a partner in a tony dental practice that specializes in expensive and not wholly necessary cosmetic work, a line of work that he's a little ashamed of -- reconnects with Charlie, a rocky prospect at first, considering his old pal claims not to remember him and won't even look him in the eye. But eventually, the two rebuild their friendship. Alan is determined to help Charlie rejoin the world. And Charlie helps Alan rediscover the joys of youthful spontaneity, getting him out of the house and away from his all-too-sensible wife, Janeane (the wonderful Jada Pinkett Smith, wasted in a flat, smallish role). After spending time with Charlie, Alan realizes that eating Chinese food all the time and going to all-night Mel Brooks festivals is fun! He even gets up the courage to tell off some of his snooty, gossipy fellow dentists. Hanging out with the mentally imbalanced definitely has its advantages.

Binder -- whose last picture was the exhaustingly implausible 2005 "The Upside of Anger" -- wrote and directed "Reign Over Me," and his impulses aren't wholly bad: In this movie, as in "The Upside of Anger," he's eager to tease out the funny stuff that often lurks between the layers of human pain and suffering. If "The Upside of Anger" was often too aggressively, jauntily neurotic, it was at least enjoyable for its performances, particularly the one given by Kevin Costner as an aging baseball star who falls into bed, and into a comfortable and comforting kind of love, with a bitter suburban wife and mom played by Joan Allen.

But even though the actors in "Reign Over Me" are ostensibly employed in the service of telling a deeply human story, they often seem more like its powerless pawns. Cheadle is the exception: Characteristically, he gives a performance that's believable every minute, maybe because he relaxes into his role instead of trying to wrest it into a deeply meaningful balloon-animal shape. But Sandler, as much of an effort as he makes here, doesn't have that kind of skill or confidence. As a comic actor, he's often funniest when he appears to be doing nothing at all. But as a dramatic actor, he often doesn't know when to stop doing everything, and he needs the right director to corral him. In "Punch-Drunk Love," Paul Thomas Anderson helped Sandler make the most of the snappish aggression lurking beneath his boyish, Little League dropout demeanor. But here, Sandler gets the balance all wrong: He amps up his childlike innocence to show us how much his character is suffering, to the point where there's nothing believably adult about him. His tantrums come off as showboating rather than the product of real pain.

"Reign Over Me" is a very gentle picture, intended to soothe us, not to jolt or shock us. But it's so gentle that it lacks any discernible energy; sometimes it seems there's barely enough tension in the story to keep the images from sliding off the screen. And when the tension does kick in, tentatively, it feels manufactured and inorganic. In the end, a mysterious, unstable beauty (played by Saffron Burrows, who's stiff in a role that almost no actor could carry off) might just be the key to Charlie's future happiness -- because when crazy people come together, they can sometimes heal each other. If only, in real life, the solutions to our problems were that simple. "Reign Over Me," ostensibly a drama about getting past 9/11, only turns the event into a shrink-to-fit tragedy, just big enough to fill a movie screen -- barely.