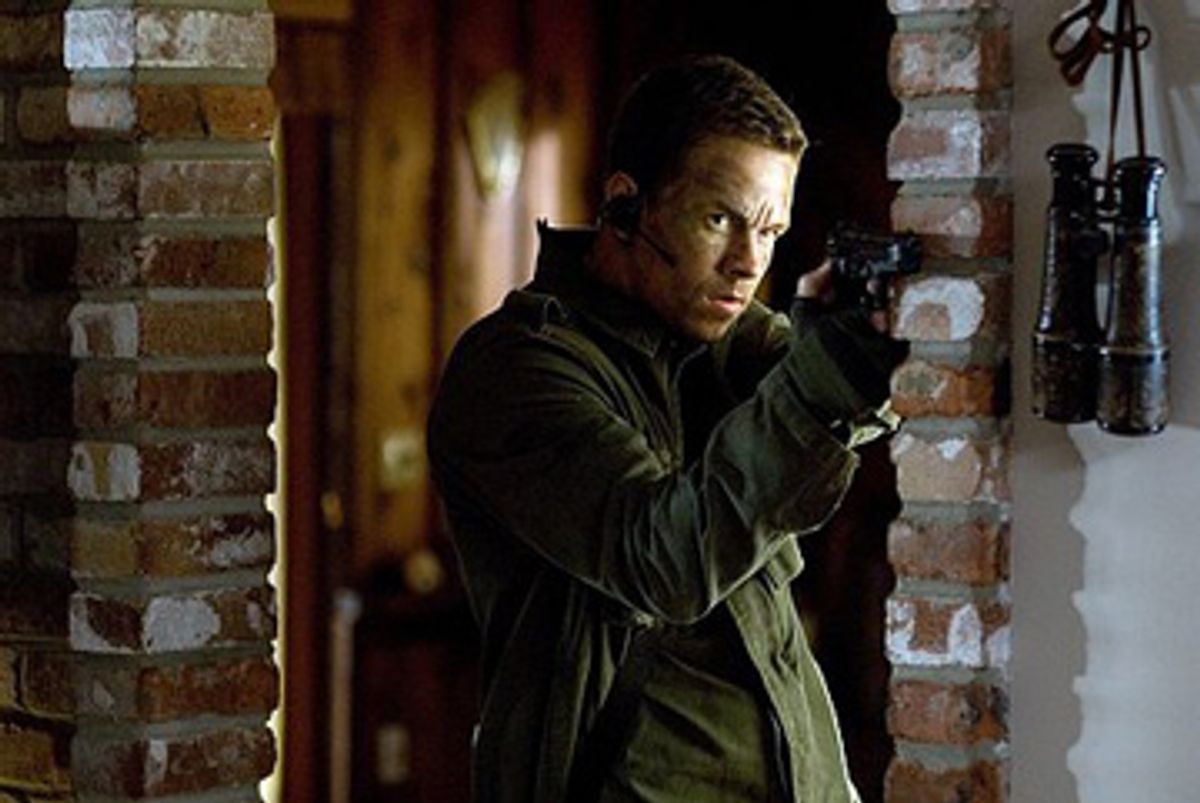 Antoine Fuqua's "Shooter" is a lefty fantasy dolled up in the kinds of thrills and frills a gun-toting right-winger could love: There's plenty of explosive blammo action, and a corrupt senator who has the Constitution confused with Charmin. Mark Wahlberg plays a retired Marine scout sniper who, disillusioned with his country and its so-called leadership, has retreated to a remote mountain home, where he lives off the land with a friendly coonhound as his only companion. This guy's name is Bob Lee Swagger, and you can bet he does: Fuqua and cinematographer Peter Menzies Jr. give us no fewer than three shots of him striding purposefully toward the camera in slow motion, sometimes wearing regulation groovy-guy wraparound sunglasses, other times in manly silhouette -- he's a man of action straight out of a recruitment commercial.

One day, a bunch of serious government dudes, including a decorated retired colonel (Danny Glover, whose performance resembles nothing so much as the steady drone of an aircraft carrier) and a sleazebag chewing a toothpick (Elias Koteas, who acts through his stubble), show up at his house: Will he help them by planning a presidential assassination? Just planning it, not going through with it, they clarify, as they bat their official-business doe eyes. It turns out they've uncovered a plot to kill the prez, and they have an idea of how it's going to be pulled off, but they're missing some details that they believe this master marksman can piece together. Will he do his patriotic duty and help out? Swagger's first answer is a vigorous no. Then he changes his mind and hops a plane east to put his expertise to work -- only to find that his smarts and willingness to help have made him the mark.

Swagger must run, or at least swagger, for his life. There are a few people who might be able to help him, including a rookie FBI agent (played by the earnest, likable Michael Peña) named Nick Memphis. A couple of low-level hoods, Johnny Danger and Slim Gingivitis, threaten to blow the whole megilla to smithereens.

OK, those last two characters don't exist, but even if they did, they couldn't possibly make the plot -- or the characters' names -- seem any more ridiculous. (Although I kid you not when I tell you one of the producers is named Ric Kidney.) "Shooter" -- adapted by Jonathan Lempkin from the book by novelist and Washington Post film critic Stephen Hunter -- is far more complicated than it needs to be, taking more crazy twists and turns than it should. The picture might be entertaining if it didn't take itself so seriously. When that nasty senator (played by Ned Beatty) intones arrogantly, "The truth is what I say it is," we can't even relish his overstuffed sense of entitlement: Everything here is played straight, and very earnestly, as if Fuqua (whose last picture was the dank and dingy "King Arthur") were following a regulation book.

Still, some of the actors do their best to keep the picture breathing: Kate Mara plays the plucky love interest, and her scrappy sense of courage is believable until the script lets her down. Levon Helm has a small role as a sharpshooter guru to whom Swagger turns for help: His what's-the-hurry? drawl enlivens the movie rather than slows it down. And Wahlberg confers some gravity and good sense to a story that rambles into ridiculousness. He plays Swagger with so much straight-arrow conviction that you can't help rooting for him. No matter how wobbly the movie around him gets, his aim is true.