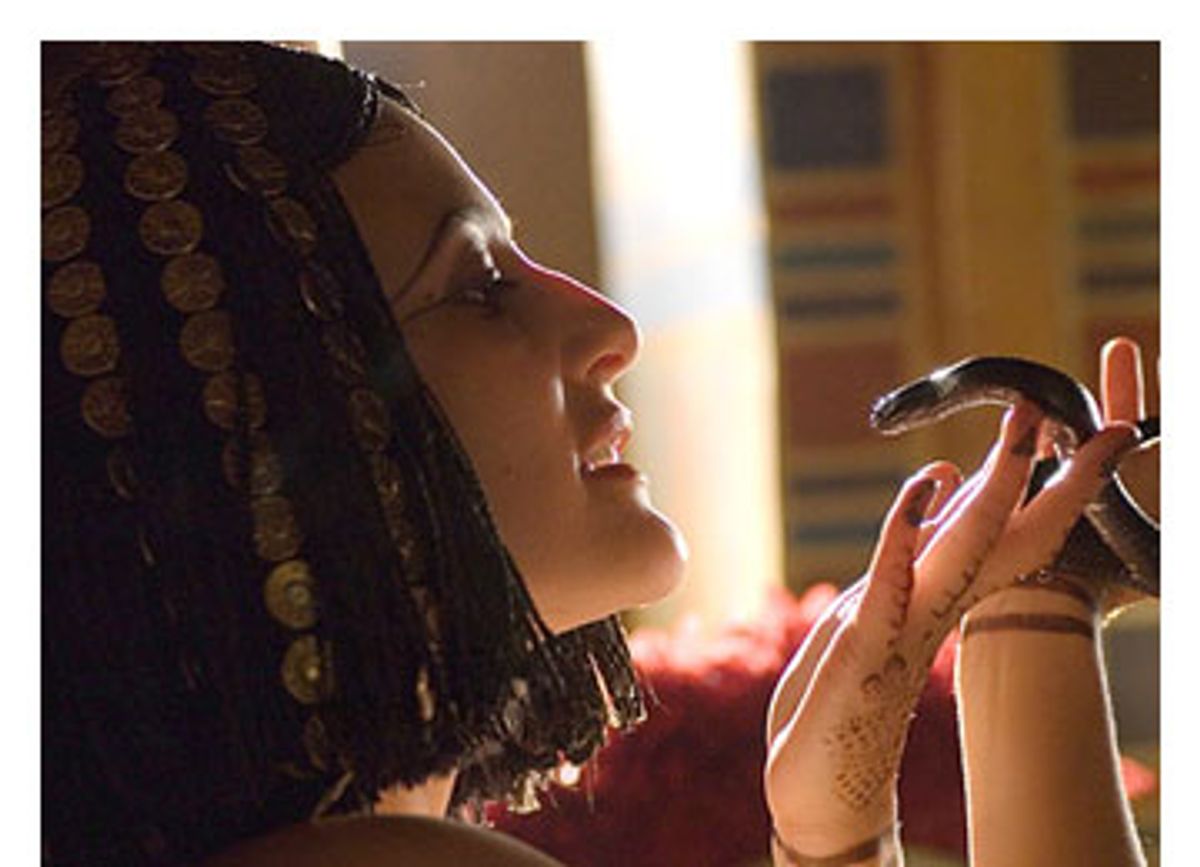 What's the best way to end a season? By tantalizing viewers with a cliffhanger, or by tying up loose ends? Should story lines be resolved, or should more questions be piled on top of existing questions, to keep viewers coming back for more and to pump up the suspense for next season?

Or should the whole gang stand in a semicircle and reflect on the fact that everything turned out just fine, thanks to those meddling kids? Should the denouement include a tag line, where the monkey Gleek upends a trash can, causing everyone to laugh uproariously right before the credits roll?

When you think of some of the better finales in recent history -- the last episode of "Six Feet Under," last year's "Lost" finale, the fourth season finale of "The Sopranos" when Carmela and Tony were about to get divorced, last year's "Battlestar Galactica" finale, when the Cylons invaded New Caprica -- the main requirement for a satisfying finale seems to be that, more than anything else, it feels momentous. Whether questions remain unanswered or not, at the very least, it should feel like the tide is turning.

(SPOILER ALERT: Details of Sunday night's finales of "Rome," "Battlestar Galactica" and "The L Word" included in this column.)

Roman bloodbath
Of course, it would be pretty difficult for Sunday night's "Rome" finale to avoid feeling momentous, since it marked the end of the season and the end of the series. Still, who knew that Mark Antony and Cleopatra would meet such a gruesome end? Who knew that Octavian would turn into such a major-league asshole?

Well, OK, anyone familiar with the basics of world history knew that. But luckily, the two of you didn't spoil it for the rest of us!

Yes, yes. Of course, I'm joking, princess. We all knew that Augustus Caesar aka Octavian murdered members of the Senate and took their riches, so we could reasonably conclude that he might be something of a jerk to his mom and sister. But who knew Atia (Polly Walker) would become a shadow of her former self? Does this mean that nasty Servilia (Lindsay Duncan) had the last laugh because, as predicted, Atia was depressed and bitter after Mark Antony (James Purefoy) hightailed it to Egypt and refused to acknowledge her when she visited? Atia's last little barb for Octavian's wife was satisfying, but the big picture was bleak indeed.

And yes, of course we knew that Mark Antony and Cleopatra (Lyndsey Marshal) were going down in flames, but who knew it would include heavy drugs, deceit, a knife to the heart and a snake to the boob? And why did Caesarion (Max Baldry) escape, when the history books tell us he was murdered by that sweet boy Octavian?

The second (and last) very expensive season of "Rome" was fairly smart and enjoyable and not an epic disappointment, at least. But didn't it feel like someone on the set got a note from HBO and the BBC, saying that the show had been canceled, and they had to wrap up the whole story in the next three episodes? We raced through so many big events at the end there -- Mark Antony married Octavia (Kerry Condon), left Rome, reconnected with Cleopatra, challenged Octavian (Simon Woods) -- it all felt a little bit haphazard and rushed. Two of Titus Pullo's (Ray Stevenson) wives died in rapid succession, Lucius Vorenus (Kevin McKidd) discovered his daughter's deceit, then skipped town, Atia slowly wasted away, Octavius lost another True Love, thanks to her crappy family... And even though I loved the scenes with Cleopatra and Mark Antony, I never felt like I knew all that much about Mark Antony as a character -- or Octavian or Sevilia or even Brutus, for that matter.

Even so, as finales go, Sunday night's final episode of "Rome" was reasonably gripping. Or it was, until they threw in that appalling tag line! Titus Pullo and Caesarion are walking through a crowded street, and Caesarion, who thinks he's the son of Julius Caesar when in fact he's Pullo's son, says he intends to redeem his father's name, to which Pullo answers, "Listen, about your father..." Da dum dum, ch!

Can you believe they'd end a historical epic with a joke? Why not throw in a monkey and an overturned trash can while you're at it? Quite the fitting end for a series that never came close to realizing its full potential.

Out to sea
But now that the little monkey in the trash can has whet your appetite for lighter, more humorous fare, we'd better move on to "The L Word," which had its worst season yet -- and that's saying a lot.

The finale was every bit as awful as the entire season, and there's no way to cover the whole, ugly mess, but here's my favorite scene: Tina (Laurel Holloman) is working on a film adaptation of Jenny's (Mia Kirshner) book, but she lies to her and tells her that a big meeting with the director and some studio execs has been canceled. Jenny crashes the meeting with her new little dog in tow, calls Tina a lying, duplicitous, scheming excuse for a friend, and warns the executives that they'd better be careful if they're going to work with her. Instead of trying to discreetly escort the lunatic and her little dog from the room, Tina calls Jenny the C word (which should really have its own dramatic series on Showtime) and accuses her of almost getting Bette, their mutual friend and Tina's former lover, fired. Just as the two bad, nasty women are almost screeching and ripping each other's clothes off, "Jerry Springer"-style, Jenny's little dog pees in the middle of the conference table.

Why am I always amazed at how bad "The L Word" is? What is so alarming about the intense awfulness of this show? Maybe because the Bette-Tina story line was once pretty interesting, and because it's a show about gay women, I want it to be good and keep hoping that it'll improve, when it just keeps getting worse and worse.

And for some reason Jenny is always at the center of the stupidest stories of all. Apparently the writers hate this character almost as much as the rest of us do. This season, they had Jenny stalking a woman who gave her book a bad review, and then, when Jenny discovers that the reviewer is dating a veterinarian, she adopts an old dog from a shelter, pretends that the dog is dying, and has the vet/girlfriend put the dog to sleep while she stands by, crying. Which makes sense, really. Which of us hasn't seduced someone by killing an old dog with them?

Fittingly, toward the end of last night's episode, Jenny had somehow drifted off to sea on a small rubber raft without anyone noticing that she was gone. It was such a stupid turn of events that I half expected her dead body to drift up onto the shore, just as Alice and her "I'm leaving for Iraq tomorrow" soldier girlfriend are lying on the beach together, locked in a globally relevant, politically weighty embrace.

And if you thought that was heavy-handed, dig this: Right before we see Alice and Soldier Girl embracing, Bette (Jennifer Beals) flies to upstate New York to make a big, flashy show of winning back her estranged girlfriend Jodi, played by Marlee Matlin. And as the two smile and embrace, what are the lyrics we hear in the background?

Um, who let the protest singer onto the set right in the middle of the final scene of the season? It's tough to imagine that even Matlin or Beals could watch that scene without groaning in agony.

Life is but a joke
And speaking of oddly placed songs, let's get to the main event: Sunday night's "Battlestar Galactica" finale. I was on board for this one from the start: I loved Lee Adama's heartfelt speech at Baltar's trial, particularly after he spent most of this season mooning and pouting and just generally acting like a petulant baby, loved the creepy music and the fact that Anders, Chief Tyrol, Tigh and Tory (Roslin's press secretary) were the only ones who could hear it, loved the growing suspicion that they were all Cylons (Who better to be a Cylon, than Tigh?), loved the power outages and the mounting suspense... Yes, this was a finale that anyone could get behind.

Maybe it was a stretch to make so many longstanding characters Cylons, but maybe they just think that they're Cylons. Who knows? Most importantly, it all felt momentous, big changes were clearly afoot, changes that didn't involve any temples or empty stand-offs with the Cylons or adulterous affairs. Last night's finale had me by the throat. And then...

Chief Tyrol: There must be some kinda way outta here.

Tigh: Said the joker to the thief.

Anders: There's too much confusion here.

Tory: I can't get no relief!

Oh my God! My stoner boyfriend from high school wrote the season finale of "Battlestar Galactica"!

How did that happen? Why did Ronald D. Moore take a break and hand over responsibility for the finale to a guy who spent most of his time doing shots of Bacardi 151 Rum and noodling Hendrix on his guitar? Was that wise, really? Didn't Moore realize that my ex would make Bob Dylan the Cylon God?

Can you believe it? This is science fiction, it's pure made-up, imaginary, insane fantasy, the sky's the limit, you can do whatever you want, and you do whatever you want, and it's working, for the most part, and you want to take a little break from that to indulge your jones for Dylan? It's worth it to you, to alienate the vast majority of your audience at the end of your finale, just to reference a pretty cool song that, frankly, no longer seems all that cool since most of us have heard it, oh, fifty million times in the last 20 years?

When I heard those lyrics, all I could think was: Wow, I was way too hard on "The L Word."

Next week: "The Shield" returns, and Vic is out for blood! Plus: Showtime's historical drama "The Tudors" digs into Henry VIII's velvet goldmine.