It's all fun and games

In the crazy, mixed-up lexicon of modern parenting, learning about table manners is "fun" but playing cops and robbers is "good for you." What's next? 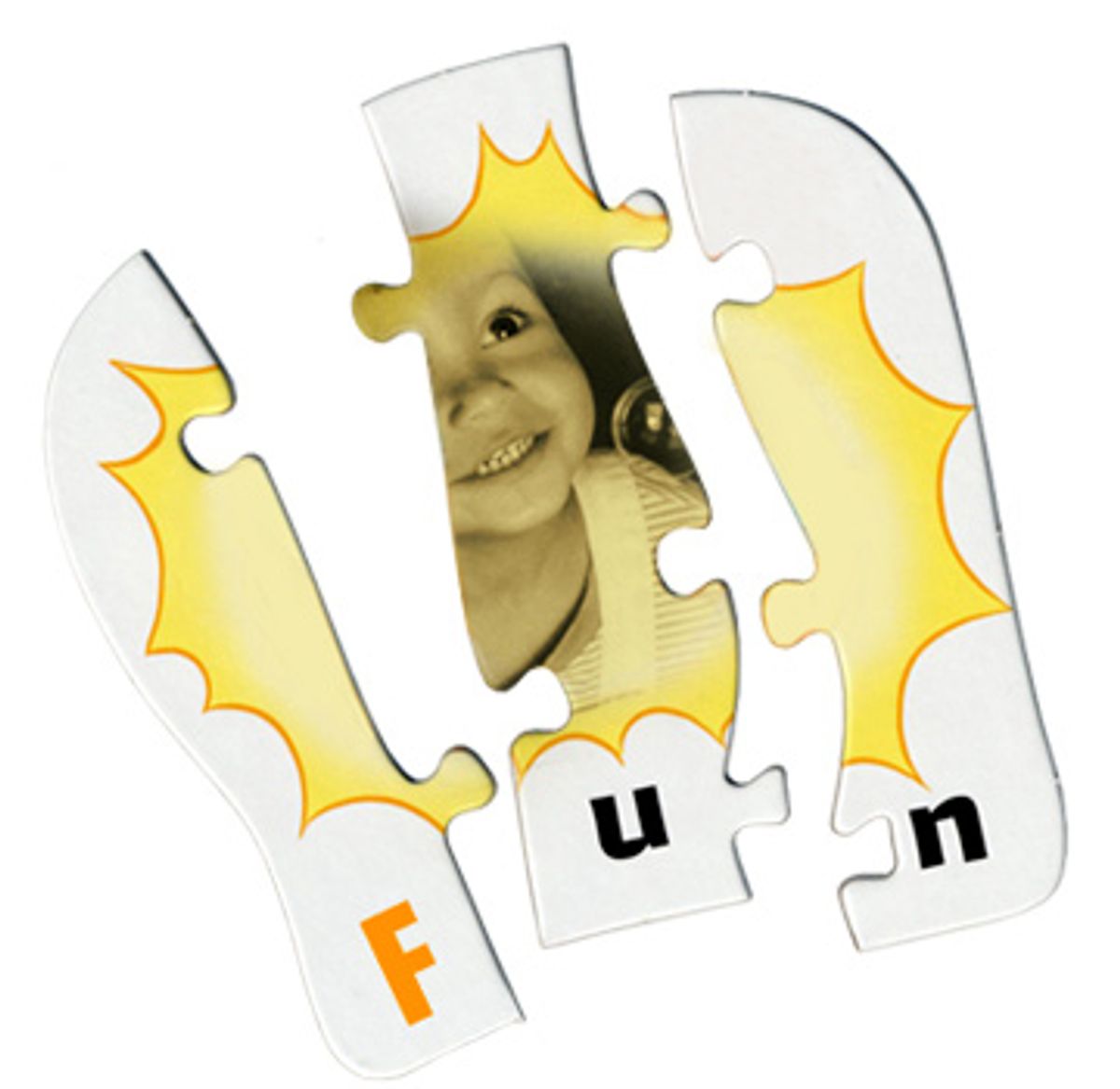 As a writer, words matter to me, and I spend an inordinate amount of time making sure I'm using the right ones. But as a parent, I've watched my own language slowly decay. I say, "That's not OK," when I mean, "Do that again and you won't live to see third grade," and I say, "The blocks need to stay in your room," when I know that blocks are inanimate objects that don't care one way or another if an unsuspecting mother trips over them and falls down a flight of stairs. But I draw the line at the new linguistic plague that has infected the world of child-rearing: the attempt to empty all meaning from the word "fun."

I first noticed it at a bookstore last month, when I saw a sticker on a book about manners that proclaimed: "Manners Are Fun!" As someone whose child sends thank you notes to Santa Claus, I'm certainly not knocking manners. But if you have ever taught manners to a child or have managed to acquire some of your own, you know that they are not, by any known definition of the word, fun. Burping at the table is fun. Saying "excuse me" afterward isn't.

Yet children are constantly being told that things are fun, even -- no, especially -- when they're not. Math is fun! Fitness is fun! Safety is fun! Imagine if this rhetorical strategy were applied to grown-ups. Instead of dire official notices, earnest billboards and nagging spouses we could have cartwheeling clowns proclaiming: Income taxes are fun! Mammograms are fun! Cleaning the cat box is fun!

What I find most disturbing about all this fake fun is that it has been accompanied by a complementary and yet far more sinister trend: the declaration that things children genuinely find fun are, in fact, good for them. There is a sign next to the puppet theater at my local science museum assuring parents that, however pointless it may seem, playing with puppets will actually make their children smarter. I worry for the parents who need to be told that pretending to be a lion is a worthwhile activity for a 4-year-old, but apparently they exist in sufficient numbers to warrant their own sign.

Worse, once parents have decided that play is actually Good For Children, they inevitably suck all the fun out of it. Recently, at another children's museum, I watched a mother and her preschooler emerge from the checkout aisle of the play supermarket. "That was very good pretending, Ruby," the mother gushed. I wondered if Ruby had previously been guilty of sub-par pretending. Had she been tutored in the art of fakery by a remedial play instructor? I fear I will soon hear parents praising their offspring for other formerly fun activities like armpit farting, jumping on the bed, and kicking their brother under the table.

If you need further proof that childhood is in serious trouble, consider this: The American Society of Pediatrics recently released a report urging parents to allow their children to play, because doing so helps children become creative, discover their own passions, develop problem-solving skills, relate to others, and adjust to school settings. Oh yes, and it's also fun, although the pediatricians declined to use the word. Instead, they described play as "a simple joy that is a cherished part of childhood," which makes it sound like something you'd buy from one of those nostalgic gift catalogs that start arriving three months before Christmas.

Still, not all the news is bad. I was heartened by a study that came out a few days later, this one from the Brookings Institution. Researchers compared math skills in different nations and found that the 10 countries whose students enjoyed math the most all scored poorly in it. In other words, if you think math is fun, it's probably because you don't know how to do it. The study's author concluded that the United States needs to rethink what he called "the happiness factor."

Armed with these two studies, I am hoping we can reunite the word "fun" with its original meaning: something children do for their own pleasure while their parents sit around on park benches and complain about having to nag them to do their homework and say "please."

To this end, I have prepared a set of flash cards, which can be used to quiz both children and parents. Each one is printed with a pictogram depicting a common childhood activity like going to the dentist, picking your nose, firing a plastic machine gun at an imaginary alien, and practicing piano. Children and parents who can successfully identify which of these activities is fun will be rewarded with their choice of prizes: a box of thank you cards, an algebra book or a gift certificate to Ben and Jerry's. I think kids will love them, but in case they don't, I've put a sticker on the box telling them why they should. It says: Linguistic precision is fun!