Inside the secretive plan to gut the Endangered Species Act

Proposed regulatory changes, obtained by Salon, would destroy the "safety net for animals and plants on the brink of extinction," say environmentalists. 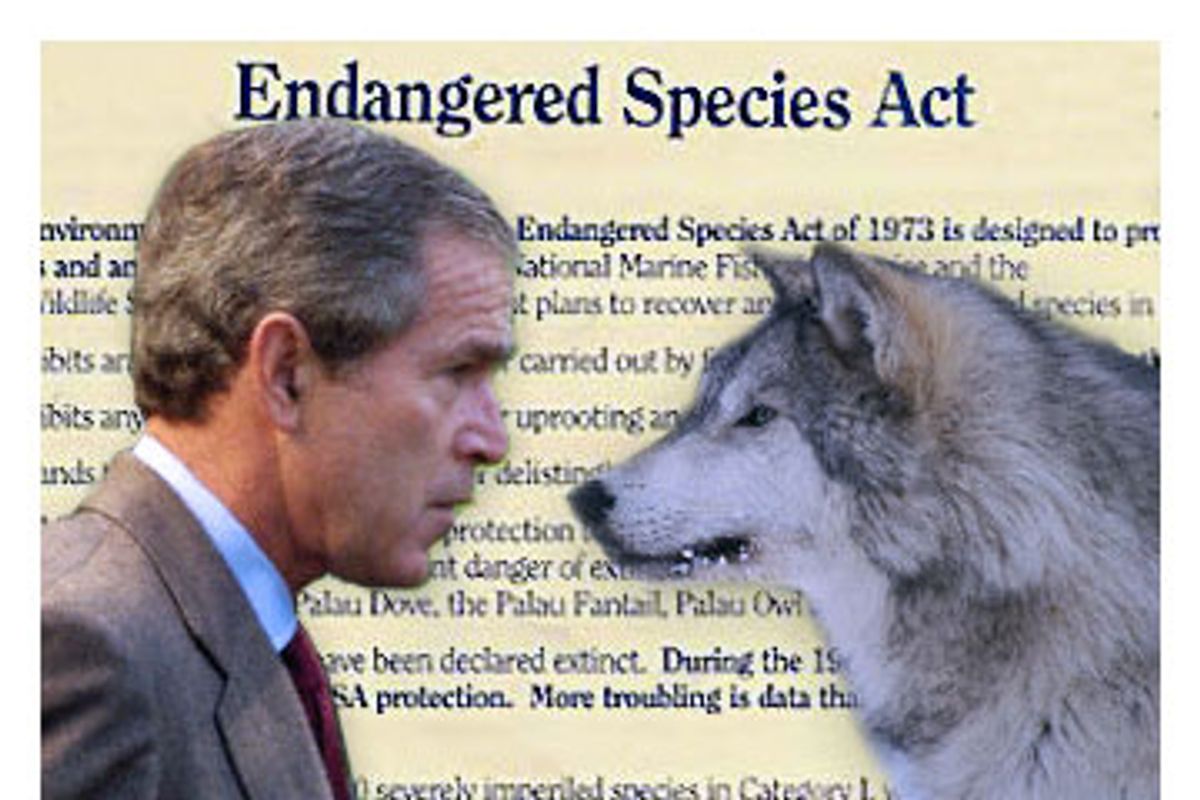 The U.S. Fish and Wildlife Service is maneuvering to fundamentally weaken the Endangered Species Act, its strategy laid out in an internal 117-page draft proposal obtained by Salon. The proposed changes limit the number of species that can be protected and curtail the acres of wildlife habitat to be preserved. It shifts authority to enforce the act from the federal government to the states, and it dilutes legal barriers that protect habitat from sprawl, logging or mining.

"The proposed changes fundamentally gut the intent of the Endangered Species Act," says Jan Hasselman, a Seattle attorney with Earthjustice, an environmental law firm, who helped Salon interpret the proposal. "This is a no-holds-barred end run around one of America's most popular environmental protections. If these regulations stand up, the act will no longer provide a safety net for animals and plants on the brink of extinction."

In recent months, the Fish and Wildlife Service has gone to extraordinary efforts to keep drafts of regulatory changes from the public. All copies of the working document were given a number corresponding to a person, so that leaked copies could be traced to that individual. An e-mail sent in March from an assistant regional director at the Fish and Wildlife Service to agency staff, asking for comments on and corrections to the first draft, underscored the concern with secrecy: "Please Keep close hold for now. Dale [Hall, director of the U.S. Fish and Wildlife Service] does not want this stuff leaking out to stir up discontent based on speculation."

Many Fish and Wildlife Service employees believe the draft is not based on "defensible science," says a federal employee who asked to remain anonymous. Yet "there is genuine fear of retaliation for communicating that to the media. People are afraid for their jobs."

Chris Tollefson, a spokesperson for the service, says that while it's accurate to characterize the agency as trying to keep the draft under wraps, the agency has every intention of communicating with the public about the proposed changes; the draft just hasn't been ready. And, he adds, it could still be changed as part of a forthcoming formal review process.

Administration critics characterize the secrecy as a way to maintain spin control, says Kieran Suckling, policy director of the Center for Biological Diversity, a national environmental group. "This administration will often release a 300-page-long document at a press conference for a newspaper story that will go to press in two hours, giving the media or public no opportunity to digest it and figure out what's going on," Suckling says. "[Interior Secretary Dirk] Kempthorne will give a feel-good quote about how the new regulations are good for the environment, and they can win the public relations war."

In some ways, the proposed changes to the Endangered Species Act should come as no surprise. President Bush has hardly been one of its fans. Under his reign, the administration has granted 57 species endangered status, the action in each case being prompted by a lawsuit. That's fewer than in any other administration in history -- and far fewer than were listed during the administrations of Reagan (253), Clinton (521) or Bush I (234). Furthermore, during this administration, nearly half of the U.S. Fish and Wildlife Service employees who work with endangered species reported that they had been directed by their superiors to ignore scientific evidence that would result in recommendations for the protection of species, according to a 2005 survey of more than 1,400 service biologists, ecologists and botanists conducted by Public Employees for Environmental Responsibility, a nonprofit organization.

"We are not allowed to be honest and forthright, we are expected to rubber stamp everything," wrote a Fish and Wildlife Service biologist as part of the survey. "I have 20 years of federal service in this and this is the worst it has ever been."

The agency has long seen a need to improve the act, says Tollefson. "This is a look at what's possible," he says. "Too much of our time as an agency is spent responding to litigation rather than working on recovering the species that are most in need. The current way the act is run creates disincentives for people to get involved with recovering species."

Kempthorne, boss of the Fish and Wildlife Service, has been an outspoken critic of the act. When he was a U.S. senator from Idaho in the late 1990s, he championed legislation that would have allowed government agencies to exempt their actions from Endangered Species Act regulations, and would have required federal agents to conduct cost-benefit analyses when considering whether to list a species as endangered. (The legislation failed.) Last June, in his early days as interior secretary, Kempthorne told reporters, "I really believe that we can make improvements to the act itself."

Kempthorne is keeping good on his promise. The proposed draft is littered with language lifted directly from both Kempthorne's 1998 legislation as well as from a contentious bill by former Rep. Richard Pombo, R-Calif. (which was also shot down by Congress). It's "a wish list of regulations that the administration and its industry allies have been talking about for years," says Suckling.

Written in terse, dry legal language, the proposed draft doesn't make for easy reading. However, the changes, often seemingly subtle, generally serve to strip the Fish and Wildlife Service of the power to do its stated job: to protect wildlife. Some verge on the biologically ridiculous, say critics, while others are a clear concession to industry and conservative Western governors who have long complained that the act degrades the economies of their states by preventing natural-resource extraction.

One change would significantly limit the number of species eligible for endangered status. Currently, if a species is likely to become extinct in "the foreseeable future" -- a species-specific timeframe that can stretch up to 300 years -- it's a candidate for act protections. However, the new rules scale back that timeline to mean either 20 years or 10 generations (the agency can choose which timeline). For certain species with long life spans, such as killer whales, grizzly bears or wolves, two decades isn't even one generation. So even if they might be in danger of extinction, they would not make the endangered species list because they'd be unlikely to die out in two decades.

"It makes absolutely no sense biologically," wrote Hasselman in an e-mail. "One of the Act's weaknesses is that species aren't protected until they're already in trouble and this proposal puts that flaw on steroids."

Perhaps the most significant proposed change gives state governors the opportunity and funding to take over virtually every aspect of the act from the federal government. This includes not only the right to create species-recovery plans and the power to veto the reintroduction of endangered species within state boundaries, but even the authority to determine what plants and animals get protection. For plants and animals in Western states, that's bad news: State politicians throughout the region howled in opposition to the reintroduction of the Mexican gray wolf into Arizona and the Northern Rockies wolf into Yellowstone National Park.

"If states are involved, the act would only get minimally enforced," says Bob Hallock, a recently retired 34-year veteran of the Fish and Wildlife Service who, as an endangered species specialist, worked with state agencies in Idaho, Washington and Montana. "States are, if anything, closer to special economic interests. They're more manipulated. The states have not demonstrated the will or interest in upholding the act. It's why we created a federal law in the first place."

Additional tweaks in the law would have a major impact. For instance, the proposal would narrow the definition of a species' geographic range from the landscape it inhabited historically to the land it currently occupies. Since the main reason most plants and animals head toward extinction is due to limited habitat, the change would strongly hamper the government's ability to protect chunks of land and allow for a healthy recovery in the wild.

The proposal would also allow both ongoing and planned projects by such federal agencies as the Army Corps of Engineers and the Forest Service to go forward, even when scientific evidence indicates that the projects may drive a species to extinction. Under the new regulations, as long as the dam or logging isn't hastening the previous rate of extinction, it's approved. "This makes recovery of species impossible," says Suckling. (You can read the entire proposal, a PDF file, here.)

Gutting the Endangered Species Act will only thicken the pall that has hung over the Fish and Wildlife Service for the past six years, Hallock says. "They [the Bush administration] don't want the regulations to be effective. People in the agency are like a bunch of whipped dogs," he says. "I think it's just unacceptable to go around squashing other species; they're of incalculable benefit to us. The optimism we had when this agency started has absolutely been dashed."